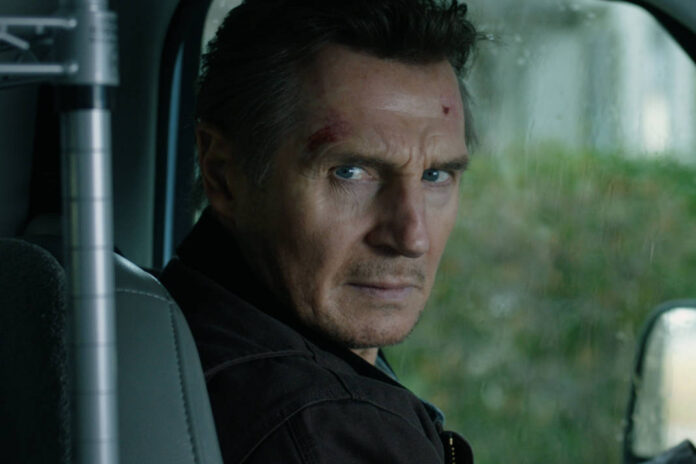 Honest Thief is not honest at all. It sells itself as the latest in the modern line of post-Taken Liam Neeson action vehicles. The ones that trade on his gravitas and high octane set pieces in lieu of coherent plots or strong dialogue.

Honest Thief only has half of that, with a budget and production design that can’t come anywhere close to co-writer/producer/director Mark Williams’ middling ambitions. What it does have is a committed performance from Neeson (and a game Kate Walsh) which covers up a lot but can’t cover up everything.

Tom Carter (Neeson), on the other hand, can cover up everything. Or at least a lot, not least of which is that for several years he has been the notorious In-and-Out Bandit, a master thief who has stolen more than $9 million dollars and never been caught. When a chance encounter introduces him to the love of his life (Walsh) he decides to turn himself and his ill-gotten gains in.

Unfortunately, the lure of $9 million tax free is too much for the FBI agent (Jai Courtney) sent to bring himself in. Tom must use all of his cunning and skills to escape the crooked cops trying to cover up their crimes and protect Annie, and all before the rest of the FBI catches up to him.

It’s not a bad idea for this kind of thriller (in fact, it’s been done more than once) and the very experienced cast give it their all, particularly Neeson. His late career action resurgence has worked so well specifically because of the truth and meaning he has put into even the flimsiest dialogue, in some cases like The Grey turning in career best performances.

His chemistry with Walsh gives a one-dimensional, plot contrived relationship actual stakes and something like urgency. Donavan and Patrick are in a similar boat, with the benefit of just enough character ticks to give them a semblance of human beings with inner lives caught in strange, unwieldy circumstances.

Except the circumstances aren’t that strange or unwieldy. The villains are bland and their descent into villainy unassuming and unpromoted, summed up by standard-movie-villain Courtney’s blank surprise at his own willingness to cross any moral boundary. They are there to do a job and that job is to make sure action and thriller sequences happen, and by God that job is going to get done.

Usually that’s enough to hit some sort of bar of action-packed climax with thrilling stunts and neat camera work. A gunfight turning into two characters falling out a window and to the street below shouldn’t be possible to be made boring, but somehow Williams manages it, with most of the other face-to-face confrontations in the same boat.

At some point Honest Thief just runs out of steam, leaving most of its final climaxes to occur over cell phone calls as Tom tries to outwit his antagonist. It’s not unusual to see independent dramas made up of scenes of two or three people in a room talking, that’s usually all they have to work with. Finding the same in what is ostensibly a studio action film is strange, to say the least.

Be it a consequence of budget, time or experience the set pieces are short, the set ups are long, and everything has an aggressively low rent feel. A big, punchy pay off isn’t quite worth a bland set up but it helps even the exchange. Honest Thief has all of the drawbacks of the budget action thriller and none of the benefits. Liam Neeson may be doing God’s work dragging the film to something like interesting, but even he can’t work miracles.

Honest Thief was released in theaters by Open Road Films and Briarcliff Entertainment on Friday, October 16, 2020.

Bleecker Street has released the trailer and poster for Ordinary Love, the romantic drama opening in theaters on February 14, 2020. Directed by Lisa Barros...
Read more
Movies

We already got an NBA Finals spot for the film, and now Men in Black: International character posters have also been revealed. You can view...
Read more
Movies

A new Men in Black poster has arrived and features the tagline, "The World's Not Going to Save Itself." Check out Chris Hemsworth, Tessa Thompson,...
Read more
Movies

Actor Jai Courtney has revealed to Business Insider that his character from the first Suicide Squad movie, Captain Boomerang, will return for the upcoming James...
Read more
Movies

Lionsgate's Summit Entertainment has released the new Cold Pursuit poster, which you can view in the gallery below. The film opens in theaters on February 8,...
Read more
Movies

The CW Schedule for the Holidays Revealed

The CW schedule has been announced for the upcoming holiday season. The network's programming includes classics, family favorites and all-new specials, such...
Read more

As Call of Duty gamers prepare to celebrate Halloween in the upcoming "The Haunting of Verdansk" seasonal event featuring characters from the...
Read more
Load more