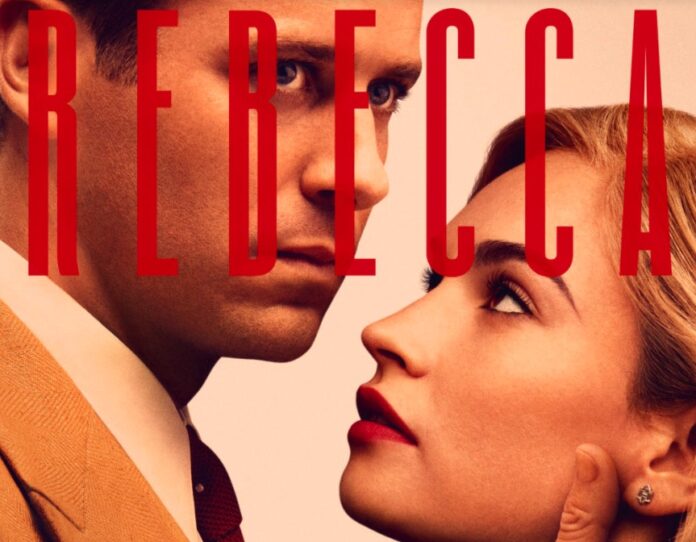 Vital Thrills recently attended the virtual AFI Q&A for the Netflix adaptation of Rebecca. The thriller stars Lily James, Armie Hammer, and Kristin Scott Thomas and is based on the 1938 novel by Daphne du Maurier. (Check out our review here.)

Attending the event were director Ben Wheatley, along with stars Lily James and Armie Hammer who play the second Mrs. de Winter and Maxim de Winter, respectively. The novel had an earlier adaptation by Alfred Hitchcock.

If you’re not familiar with the story, here is the synopsis: After a whirlwind romance in Monte Carlo with handsome widower Maxim de Winter (Armie Hammer), a newly married young woman (Lily James) arrives at Manderley, her new husband’s imposing family estate on a windswept English coast.

Naive and inexperienced, she begins to settle into the trappings of her new life, but finds herself battling the shadow of Maxim’s first wife, the elegant and urbane Rebecca, whose haunting legacy is kept alive by Manderley’s sinister housekeeper Mrs. Danvers (Kristin Scott Thomas).

Ben Wheatley stated that he’d been doing some work with Working Title, and that they had the script available for him to read. “It’s totally different from everything else I’ve done before. And I wanted to do something that was really romantic. And that would have lots of kissing in it,” he said.

That wasn’t exactly what he got. “Actually,” he said, “when we got down to it, I realized I was fooling myself because it was just full of horror and fear, and hauntings… what I felt when I read the script was that I thought I knew Rebecca. I thought I knew inside and out. I’d seen the Hitchcock adaptation, read the book. And then I just found myself falling for the script again. Just all the twists work for me and I was completely surprised at every turn… I thought well, if I could fall for it then maybe a modern audience will as well.”

Wheatley said that the big change in Jane Goldman’s script for this adaptation was the character of Mrs. Danvers, played by Kristin Scott Thomas. “She’s much more detailed than that,” he said of the accepted idea of Danvers being the villain of the story.

“There’s a lot more going on. I know I felt that Danvers is almost like the moral center of the whole thing… she’s there to remind the audience what’s actually going on, and not to be too seduced by the romance. It’s a really canny thing that du Maurier does you know. She kind of buys us all off with the romance and then slips all these really horrible ideas underneath it, and you’re kind of going along with it. [You] go, oh yeah that’s great. I really hope they get away with that.”

Lily James said she agreed with Wheatley in terms of remembering the book and story differently than it really is. She also said that, depending on where you are in life when you read it, you take different things away from it. She joked about giving away spoilers, and Hammer laughed, saying, “It’s a book from the ’30s!”

James said that during the big reveal, all her character cares about is whether or not her husband loves her. “I though, I really wanted to play her,” she said. She added that all the writers and people working on this adaptation of the story, “kind of heightens that journey, particularly for my character, and also gets all the juiciness out the romance at the beginning, to then really pull the rug out from under people’s feet when we get to Manderly.”

Armie Hammer joked about working with Wheatley again, and joked that he was told that he was up for the role, but only if Ryan Gosling, Ryan Reynolds, Chris Pine and Chris Pratt all passed. (They worked together on the film Free Fire.) He said that there was a lot of rehearsal, which is unusual for a film. Both he and James talked about blocking out the scenes, though Wheatley added that there was still quite a bit of improv and room for the actors to explore during filming.

Lily James’ character, referred to as the second Mrs. de Winter, is never given a name. James said, “We gave her a name. We called her Daphne in the script and then we had like a private name for her, just for confusion sake. Really.” She continued, saying that there are so many complexities in the novel. “The book is just endless, how you can read and interpret it, and the sort of picture she paints about patriarchy, and about the extremes of womanhood and power. Power dynamics between men and women, and everything she tells so subtly.”

Wheatley spoke about some of the costumes, saying that we should look out for yellow suits that sort of bookend the film. The cast also spoke about how they filmed the Manderley scenes and a bunch of different houses, and how that made things confusing. James said that it worked well for her character, because she always feels lost in that big house anyway. Hammer said that, because he was American, he did things he wasn’t supposed to, referencing sitting in a “coronation chair,” that was roped off. “I’m an American — like everything we have is brand new. It’s like seeing a chair; I’m like, oh that is meant to be sat in? That chair’s 1000 years old and it’s just like that.”

Of her favorite scene, James said, “I really love the scene where Mr de Winter reveals the truth about Rebecca. It’s such a hard scene because it’s like a huge monologue.” She said the way it’s written, you can feel it’s from a book. James also said that the direction in that scene, “kind of heightened and dramatized it in a way of having to just sort of reveal verbally reveal this huge plot twist.”

Rebecca is available to stream right now on Netflix. What did you think of the film? Let us know in the comments or tweet us @vitalthrillscom.

CBS All Access (try it free!) has announced the streaming service has given the green light to Texas 6 Season 2 and that Armie...
Read more
Movies

Movember Highlighted by the Death on the Nile Cast

In a new video released by Disney's 20th Century Studios, the cast of the highly-anticipated Death on the Nile is bringing attention to men's...
Read more
Movies

Lopez and Hammer Say I Do to Shotgun Wedding

Jennifer Lopez and Armie Hammer will blast their way down the aisle for Lionsgate’s action-comedy Shotgun Wedding. The announcement was made today by Erin...
Read more
Movies

Adapting a classic, with a classic reputation, is always tricky. Almost as tricky as a director with a settled style stretching himself into new...
Read more