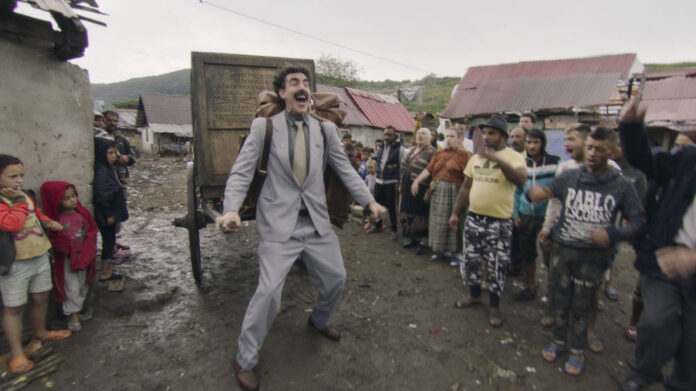 For a character and a comedian whose brands were both built on smashing expectations of not just the permissible but the expected, it’s strange that the second Borat film is exactly what you’d think it would be. Again, taking easy potshots at the conservative America it skewered 15 years ago, Borat Subsequent Moviefilm attempts some rote growth to serve as a counterpoint to what frequently seems as a retrenchment to the culture Cohen tried to show as a dead end the first time around.

Having all of this happen during a global health crisis which has become heavily politicized should be a goldmine for someone who loves to puncture the culture wars… and it is. The fact that it also shows up how shallow a lot of his other satire is is an unfortunate side effect.

As little as the jokes themselves have changed, that doesn’t mean life for Borat Sagdiyev (Sacha Baron Cohen) hasn’t. The success of his original documentary brought infamy and shame for Borat’s superiors in the Kazakhstan government, which means they’ve brought shame and infamy on Borat.

With a chance to redeem himself by bribing Vice President Mike Pence with a monkey to help the Kazak economy, Borat jumps at it. His plan is quickly derailed by the arrival of his unloved teen daughter Tutar (Maria Bakalova), prompting an even better plan as he attempts to transform her into an enticing bribe he can sell to the Vice President.

Diving headlong into the complexities of feminism while trying to navigate the difficulties of being a father — like what sort of a cage a teenage daughter would like to live in — Borat’s plan falls apart again due to the sudden arrival of a nationwide lockdown due to the health crisis.

Discovering new levels of ‘unique’ American beliefs in the wake of the lockdown, Borat has one last chance to leverage political intransigence to get the US administration on his side, or else be sent home where two hungry Uzbek cows will rip him in two. What is a poor Kazak journalist to do?

What’s always been funny about Cohen’s work has never been the sharpness of his observations — he takes the most obvious shots at the most obvious people — but how far he will take his setups. There is no level of self-ridicule or self-harm he won’t stoop to (except maybe self-mutilation, and I’m not sure I would even bet on that) which slightly softens how mean he can be to the sometimes-unwitting individuals he targets. A side effect of that is he quickly takes his jokes up to 11 and must find some way to stay there as long as possible. It’s a difficult level to hold onto and not every joke can manage it.

That desire is probably why Cohen aims for such low hanging fruit so often, especially by transgressing cultural mores, but it also leads to some repetition and major misses. An extended conversation with a doctor who thinks Tutar needs an abortion due to incest after she has swallowed a tiny baby tchotchke and needs it removed is exactly the sort of squirm-inducing laughs Cohen’s reputation hinges on. Repeating the same joke right after as Tutar attempts to pass the tchotchke in a public stall can’t possibly come across as anything but poor repetition and too much of Borat Subsequent Moviefilm is like that.

It’s also working against its own sense of reality. The Borat character, and Cohen’s schtick, was not as well known 15 years ago and he was able to somewhat realistically carry off the reality of the Kazak documentary filmmaker that so many of its targets could at least believably fall for. That’s not true anymore and it’s inconceivable that many of its participants aren’t at least somewhat aware of what’s going on, particularly as the film randomly drops its documentary gimmick to become more of a generic comedy.

Cohen himself even points this out as he is early on quickly recognized on camera as Borat and spends the rest of the film trying out different versions of plainly ridiculous disguises on top of his Borat costume. Suspension of disbelief is required for any film, but especially for Borat as so much of the humor is built on its targets taking his antics at face value.

And then it is both saved and ruined by the health crisis. The reality is no joke Cohen could come up with could trump what has been said and done in public about a major public event like this. Cohen quickly recognizes and accedes to this, spending an extended lockdown period with a pair of deniers who believe the whole thing is a hoax while also wanting to help Borat reunite with his daughter who he has discovered he actually does care for.

It’s exactly the kind of humor the series has always aimed for and is as sharp as anything Cohen has ever managed and yet doesn’t need him at all. The more he tries to insert himself into it the less funny it is, because he needs to keep attention on himself.

It culminates in a sting operation with Rudy Giuliani, who certainly seems to believe he is having an interview with Tutar and potentially a romantic assignation as well. For a handful of minutes Borat Subsequent Moviefilm is everything the films, and Cohen himself, has been reputed to be – cringe inducing, realistic, caustically sarcastic, bafflingly ridiculous. For those minutes alone it must be seen.

But it also points how much the rest of the film doesn’t live up to that. It doesn’t transcend itself the same way most sequels don’t. For most people that doesn’t matter. People who liked the first Borat film will like this one for the same reasons. People who didn’t won’t find anything here that will change their minds. It’s probably impossible for the film to return to the zeitgeist, it changes too much to quickly and this is too much unchanged from its previous incarnation. That doesn’t make it bad. It just makes it (mostly) ordinary.

Borat Subsequent Moviefilm is now streaming and can be watched at Amazon Prime Video.

The Lord of the Rings Cast Members Announced by Amazon

Amazon Studios today announced 20 additional The Lord of the Rings cast members! They join the Amazon Original series based on the iconic The...
Read more
Streaming

Amazon Prime Video announced today that the final 10 Vikings episodes are premiering first on Prime Video in the US, UK, Germany, Austria and...
Read more
Streaming

The Expanse Season 6 to Wrap Up the Series

Amazon Studios today announced it has given the green light to The Expanse Season 6, which will wrap up the fan-favorite series based on...
Read more
Streaming

One Night in Miami Teaser Trailer and Poster Debut

Amazon Studios has revealed the teaser trailer and poster for One Night in Miami, opening in select theaters on December 25, 2020 and coming...
Read more