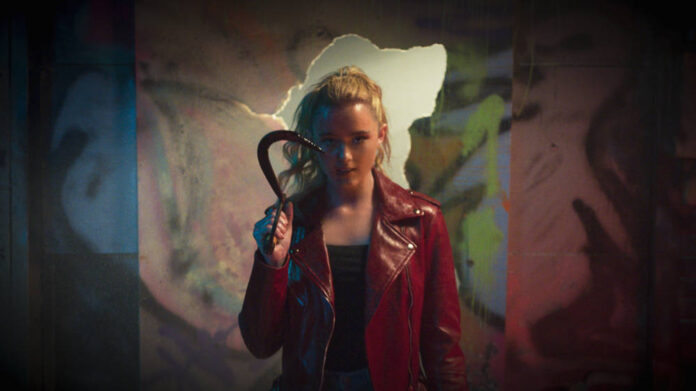 Millie doesn’t have a lot going for her. She’s unpopular at school. She’s bullied by other girls as well as her teacher. Her mother is an alcoholic. And as the school mascot, even the football players pick on her. Her only comforts are her friends Nyla and Josh.

As if things weren’t bad enough, there’s a serial killer preying upon teenagers in her hometown. And just her luck, he targets Millie. But in the process of trying to kill her, something unexpected happens. A magical knife that the Butcher uses for a murder weapon actually causes Millie and the homicidal maniac to switch places.

Millie wakes up to find her mind in the body of the killer. Meanwhile, the killer finds himself in Millie’s depressing world. However, he makes the most of the opportunity by finding a whole school of teenagers to kill as the police pursue Millie trapped in his body.

Though Freaky doesn’t do anything revolutionary, it’s still a lot of fun. It’s exactly what it appears to be – cinematic comfort food. It takes the familiar body switching genre we’ve seen in Freaky Friday, The Hot Chick, The Change Up and more and tosses it into the horror genre.

The end result is a fun mix of horror and comedy that’s a fun escape from everything else that’s going on in the world. It’s a similar formula as Happy Death Day where Blumhouse took Groundhog Day and threw in the serial killer twist. Luckily, it’s a formula that is still working.

Vince Vaughn seems to be having a lot of fun in the role as both the Blissfield Butcher and Millie. He gets to play Jason or Freddy Krueger in one scene and then a teenage girl in the next scene. Somehow he managed to play both roles convincingly. He delivers a strange mix of gory horror and laughs that’s quite entertaining.

While the film largely sits on his shoulders, Kathryn Newton is pretty great as Millie. She gets to play the awkward teenage girl one moment and the psychopathic killer the next moment. It’s a breakout role for Newton and it will be interesting to see where her career takes her next.

While Freaky follows a familiar formula, doing so also makes it utterly predictable. Every plot point, jump scare, and victim are seen coming a mile away. About the only surprises are the gore special effects and Vaughn’s comedic stunts as Millie.

Freaky relies a little too heavily on high school tropes and familiar serial killer gags. I think if the story was written more from scratch it would have allowed for a few more unpredictable twists and turns.

If you liked Happy Death Day then I think Freaky will be right up your alley. It’s an enjoyable mix of horror and humor. And while it is quite predictable, it’s a nice treat to see a new movie released after so many delays of films in 2020.

Freaky was written by Landon (Happy Death Day, the Paranormal Activity franchise) and Michael Kennedy (Bordertown) and is produced by Jason Blum (Halloween, The Invisible Man). The Universal Pictures release is produced by Blumhouse Productions in association with Divide/Conquer. The executive producers are Couper Samuelson and Jeanette Volturno.

I saw the original Star Wars Holiday Special on television. I remember seeing it; I remember as a nine-year-old kid sitting down and enjoying...
Read more
Movies

In addition to the new Halloween Kills teaser trailer, Blumhouse Productions made more announcements during its first annual BlumFest, which you can watch in...
Read more
Movies

It’s a Slaughterhouse in the Freaky Extended Look

Universal Pictures and Blumhouse Productions have brought online a Freaky extended look, which previews the twisted take on the body-swap movie. The film is...
Read more
Movies

Honest Thief is not honest at all. It sells itself as the latest in the modern line of post-Taken Liam Neeson action vehicles. The...
Read more

Apple TV+ has brought online the official trailer for Mariah Carey's Magical Christmas Special, which will be available on the streaming service starting Friday,...
Read more

On this Thanksgiving Day, Netflix has released the official The Prom trailer and we've got a look at no less than eight character posters...
Read more
Load more