The Voice Season 19 Preview and a Four-Chair Turn! 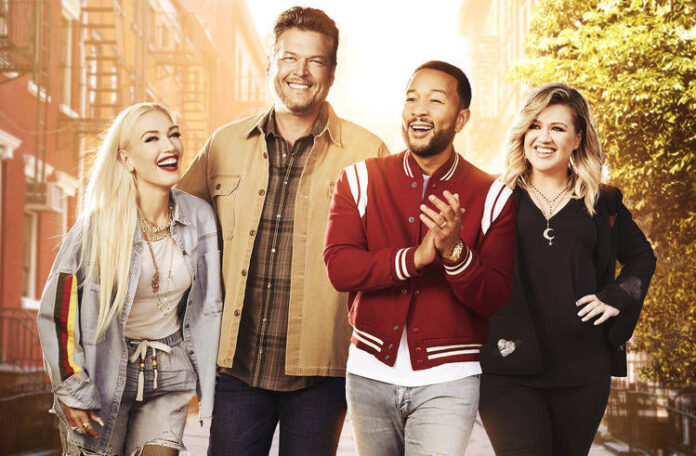 The show must go on! Kelly Clarkson, John Legend, Blake Shelton and Gwen Stefani are back in their swiveling red chairs for The Voice Season 19.

While things look a little different this year due to the health crisis, NBC never considered postponing a season of The Voice, according to the show’s executive producer Audrey Morrissey.

“You just have to sort of manifest things and be positive and know that where there’s a will there’s a way,” Morrissey told a group of reporters during a sneak peek of The Voice season 19.

“But you just have to keep a positive attitude and plow through. People take their cues from you. There was no time that I was ever talking with anybody at NBC about skipping a season or pushing it. It was like we’re doing it, it was just a matter of how,” she added.

One big difference this season is there’s no live audience. Instead there will be virtual fans cheering on the contestants. “We gave it a lot of thought. We spent a lot of time thinking about how that would be. How would it be for the artists singing to kind of feel naked out there and didn’t have that crowd to help lift them up and carry them through,” said Morrissey.

“When we thought about this season and thought about how do we make it comfortable for them, we did the best we could. We fought really hard to make sure the band was physically. That was even a question at one point. We thought we had to have them. We have to do whatever we can to make sure they at least have their group behind them.”

She continued: “I will tell you this, what was absolutely shocking in some ways was the music was incredible, the singing was incredible. It’s definitely one of our better singing vocal seasons. A lot of us are wondering if that has something to do with not having an audience and maybe the singers could actually hear themselves better without the crowd.

“I’ll tell you that the coaches commented that they felt they could hear the singing better, which makes sense. As something we were hyper concerned about the whole way ended up not being a problem.”

Morrissey did say they are very anxious to bring back audiences. “There’s so many factors that weigh into it. Obviously safety first. At this point, we don’t have plans to bring a live and in person audience into the show for this season yet. That said, we’re doing everything in our power to have our show feel like our show and be the show everybody’s loved and will continue to enjoy.”

Although it’s been challenging producing an Emmy-award winning reality show with a skeleton crew, The Voice team has successfully pulled off its 19th season without incident so far. “Fortunately for us, we’ve gotten through pretty much the whole season except for the live shows. We got through it by just being absolutely vigilant about the safety protocols and testing the coaches religiously,” Morrissey revealed.

That said, don’t expect any new surprises for the blinds or knockout rounds. “The formatting for this season is pretty much the same as last season. We’re following a similar pattern. We’re teams of 10 so we have shorter teams. We do have the block. We do have steals. We do have a save,” she said.

“There will be a four-way knockout ultimately, like we did last year. To be honest, we’re just trying to grapple producing a show that we all love. That really has been the new thing not seen to viewers, but certainly a new thing for us.”

Vital Thrills got a sneak peek at the upcoming season and in spite of the necessary safety protocols, the show still has its lively feel, funny moments, emotional elements and undeniable talent like Tamara Jade who got a four-chair turn. Clarkson pushed her button within a few seconds of her belting out the first note and Legend quickly followed. Stefani waited a minute to turn and Shelton jumped in at the very end.

The 30-year-old from Bowie, Maryland wowed the coaches with her rendition of Lizzo‘s “Cuz I Love You” and all pleaded to convince Jade to join their team.

Clarkson literally jumped out of her chair screaming, “oh my God I love you,” while Legend yelled, “sing it!” The American Idol winner gushed, “I was the first to turn around from the first note because you are incredible. Like it doesn’t matter. You’re going to be in the finale.”

“I receive that,” Jade said clearly taken back. “Everybody needs to be inspired right now. That’s why this is called ‘The Voice’ because you want someone who really moves everyone and that’s you.”

Although Clarkson had an instant connection with Jade, the others stepped up and stated their case as to why they would be the better coach while playfully arguing with each other.

So who did Tamara Jade pick? Tune into NBC when The Voice Season 19 returns on Monday, October 19th and Tuesday, October 20th to find out.

The NBC fall lineup was announced today and will include the anticipated season debuts of the network's hit dramas the week of...
Read more
TV

Aerosmith, Eilish, Lizzo, Shelton and Stefani to Perform at the GRAMMYs

The Recording Academy has confirmed its first slate of performers for the 62nd Annual GRAMMY Awards. Set to take the stage are 2020 MusiCares...
Read more
Music

Jake Hoot may have only been a one-chair turn in Season 17 of NBC's The Voice, but the 31-year-old artist just proved his talents by...
Read more
Music

NBC's The Voice Season 17 finale is here and for the first time in seven seasons, every coach has a contestant still in the competition....
Read more
Music

The Kelly Clarkson Show Renewed Through the 2020-21 Season

The Kelly Clarkson Show, the #1 new daytime show, has been renewed through the 2020-21 season by NBCUniversal. The hourlong syndicated daytime show, produced and...
Read more
Music