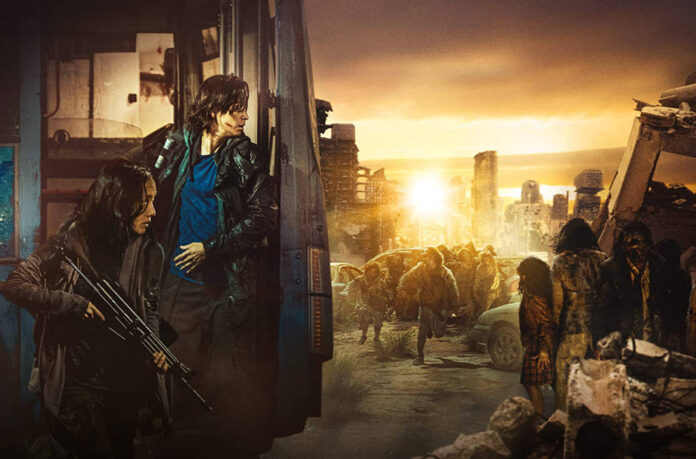 At first blush, 2016’s Train to Busan (buy at Amazon) does not seem to break the mold of the zombie (or “infected” if you prefer) movie. But it’s the details that make Train to Busan one of the best in the genre. Every character has agency, and all get the most with their screen time.

Train to Busan also benefits from the less-is-more approach; almost all the action takes place in one location, but that location is used effectively, and gives us enough of a glimpse of the outside world to understand just how much things have gone south. The emotions are broad, manipulative, but very effective, down to its final moments. Train to Busan overcomes its clichés through earned sincerity and sentimentality. We are invested in each terrifying, emotional moment.

Naturally, after the success of the first film, any returning filmmaker would want to expand on that world they created. Writer/director Sang-ho Yeon gives us more characters, more locations, and a wider scope than the original film, but what Train to Busan Presents: Peninsula cannot provide is the sense of immediacy and the deep emotion of the first. It tries, certainly, and at times almost achieves it, but Peninsula sacrifices the first film’s earnest sensibilities for action sequences that do not have the impact they had in Train to Busan.

Peninsula spends a lot of time riffing on and emulating other, better movies. A few cups of Escape from New York here, a few tablespoons of Mad Max: Fury Road there, blended with Zack Snyder, George Romero, pieces of any post-apocalyptic films from the past 20 years. That has to be expected; most movies in this genre rarely escape that genre’s trappings and the first one is only able to overcome them through empathy and relatability. This time, the size and scale of the film work against it. Peninsula is too busy to get to the intimacy that makes Train to Busan so effective.

Four years have passed since the outbreak in South Korea, but the rest of the world was able to contain it and many refugees were able to escape to other countries. But those refugees are treated poorly, especially in Hong Kong and elsewhere. Jung-Seok (Dong-Won Gang) was able to save his brother-in-law Cheol-min (Do-Yool Kim) at the onset of the outbreak, but was unable to save Jung-Seok’s sister and child.

The brothers-in-law barely speak, but when an opportunity arises to return to South Korea to collect some cash in a quick in-and-out job, both decide to team up to get their share and go their separate ways. The mission is supposed to take only a couple of hours, but as tends to happen in zombie movies, things go awry and both brothers must fight for their lives – Jung Seok with a desperate family led by Min Jung (Jung-hyun Lee) trying to survive, and Cheol-min with a militia of ragged former soldiers in the middle of a power struggle between Sergeant Hwang (Min-Jae Kim) and Captain Seo (Gyo-hwan Koo).

There are a few interesting setpieces – one that takes place during a gladiator-style game where captive survivors are forced to try to escape a zombie horde, and another during the climax that is very reminiscent of many of the chase sequences in Mad Max: Fury Road. That chase in particular has a bit of a punch to it, but it’s undermined by a lot of CGI and it being almost entirely in darkness, although there are a few sight gags and twists that make it entertaining. But it’s nothing we haven’t seen before.

Train to Busan gave us characters to cheer for, so that when the full brute force of the outbreak comes into play, we care for the outcome. None of these characters in Peninsula have the sticking power of the original film’s characters. But it’s never dull, even without that sense of empathy. Min Jung’s daughters (Re Lee, Ye-Won Lee) are capable of taking care of themselves, and how they get out of certain situations is entertaining.

I also appreciated the optimism that Train to Busan Presents: Peninsula strives for, especially in the film’s final moments (even though there’s one bit of dialogue I had to laugh at; you’ll know it when you hear it).

But the film, as entertaining as it gets at times, never hits that level of emotional resonance that Train to Busan does. Train to Busan makes the most of its limited locations, and hints of a larger world outside the train, a world falling apart. Peninsula shows us that world, but it somehow feels smaller, lesser. Train to Busan has weight to it, but sadly Peninsula is more of a distraction, albeit an entertaining one at times.

Well Go USA will release Train to Busan: Peninsula in U.S. theaters on Friday, August 21. It is currently playing in Canadian theaters and overseas.

DISCLAIMER FROM THE AUTHOR:

This film opens in theaters Friday. It’s not on streaming yet. I absolutely believe that people shouldn’t be going to movie theaters right now. People near and dear to my heart work in the theater industry, and while I want them to continue to make a living, I do not want them to do so at the expense of their lives or health, or at the lives or health of others.

Regardless of my feelings for the movie, I in no way encourage people to go to theaters right now, and I don’t want my review to do that either. Train to Busan: Peninsula streams on Shudder in early 2021. I recommend waiting until then unless things drastically change.

I could not in good conscience write my review without saying this. Please wait. No matter the quality of the film, it will be worth the wait. Know why? You’ll still be alive.

Well Go USA has released the trailer and poster for the sci-fi thriller Synchronic, scheduled to open in theaters and drive-ins on...
Read more
Movies

The AMC reopening dates have been announced and with it comes "Movies in 2020 at 1920 Prices," the chain announced today. When...
Read more

AMC Networks' Shudder has announced the movie and TV highlights for next month. The Shudder November 2020 lineup includes vampires (the Shudder...
Read more

Sundance Now has announced the movies and TV series that are coming to the AMC Networks-owned streaming service in November. The Sundance...
Read more