The One and Only Ivan Cast on the Disney Adaptation 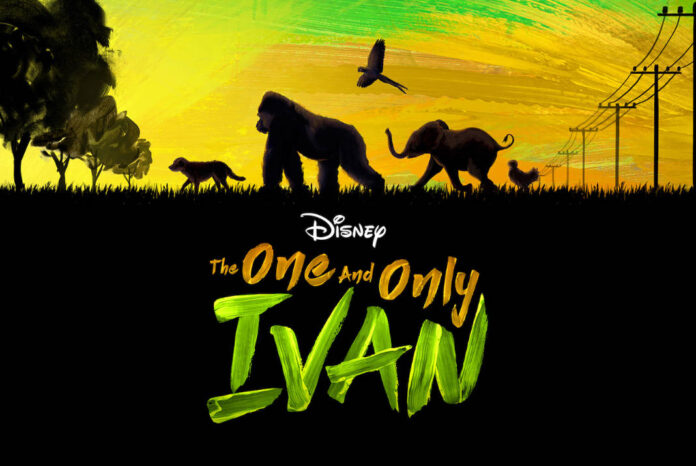 With the movie launching on Disney+ on August 14, Vital Thrills got a chance to talk to The One and Only Ivan cast. The Walt Disney Studios film is based on the award-winning book by Katherine Applegate (buy at Amazon).

The One and Only Ivan tells the story of Ivan, a silverback gorilla who learns that life isn’t defined by place and circumstance but by the power of friendship and the courage to make change happen.

Also participating were Mike White, who played Frankie the seal and wrote the script, and director Thea Sharrock. They told us all about the film, working together and what the original story meant to them.

In the film, the silverback gorilla named Ivan (Rockwell) tries to save the animals in a mall circus with his artistic abilities. The One and Only Ivan cast was asked about their own “artsy” sides.

Cranston, who plays the head of the circus, Mack, told us that he started baking sourdough bread. “I’m quite proud of it actually,” he said. He said that following recipes in our current world with no rules was fun. Chaka Khan who plays the baseball-playing chicken Henrietta said she actually ran away and joined the circus at 16. “I ran away with this guy named Robert, who was lovely,” she said. “We went out to the Barnum and Bailey circus.” She told us that she was the rope girl, and rode the elephant. Rockwell joked that he is a professional dog walker now.

Sharrock spoke about the complexity of working on a film that is a combination of live-action and CGI. “In terms of shooting this movie,” she explained, it “was very much like working on two movies at the same time because of the technical aspect of it. On the one hand we started the whole process with the voice actors because the animators needed their voices to begin to be laid down for the animation journey to begin.

“Then we shot all of our live action stuff. And then we went back in and we shot the virtual aspects of the film, which was whenever we had just animals in the scene together.” She spoke about the “tiny, tiny nuances” and how the actors changed their voices to capture the perfect performance. She said it was “unlike anything I’ve ever done before.”

Sharrock also spoke about the book, which she first read with her children. “They connected with it emotionally on a level that they really appreciated the journey that these characters go on.” She said that reading it as an adult and as a parent, she appreciated it differently, and tried to bring that to the film.

Mirren, who plays the show poodle Snickers, said that doing the film was, “a fascinating, technical experience. That’s the amazing thing about our job, is that we’re constantly exposed to completely new experiences.” She even mentioned the fact that we were doing a virtual press conference instead of one in person.

Both Prince, who plays Ruby the baby elephant, and Greenblatt, who plays Julia, the human girl who starts Ivan on his artistic path talked about how much the book meant to them. Greenblatt even did some of the drawings we see in the film.

Jolie, who plays the older elephant Stella told Greenblatt, “I love also your relationship with your dad (Rodriguez) in the movie. And I thought it was so lovely seeing that a child… the moment when you ask your dad to understand how to help.” She talked about how Rodriguez’s character George has to make the difficult choice between his career and doing the right thing.

The most adorable moment of the press conference came when Prince told us about how she suggested to Jolie that they both wear elephant onesies while recording. She told reporters that her mom bought them both, and during the session, “she put it on. And me and her have a selfie together wearing our elephant onesies.” Jolie said, “I think it’s safe to say that we became like the elephant family… we got really into our characters, us two.”

Rockwell was asked about how the isolation we’re all feeling during the pandemic made him relate to animals in a mall circus. He said he didn’t know how, but that Ivan would have something to say about it. He also spoke about how moving the documentary about the real life Ivan was.

DeVito, who plays Bob the stray dog who befriends Ivan, said of isolation: “Being in the circle, the closest circle that you have, especially [because] we’re all in the pandemic, you’re always looking for your family or your friends that are the people that are your social distancing [circle] that are the safest.” He said he and his family are watching a lot of Westerns these days.

Soo, who plays Thelma the parrot, was asked about how she got into character. She joked that she looked up parrot videos. “And then I tried to make my squawkiest, most parroty sound in my house, for everyone else to hear. I actually asked my husband, I was like, does this sound parroty enough?” She said she just walked around her house making parrot sounds and demonstrated for the group.

Funches, who plays Murphy the rabbit who rides around in a fire truck, told us about his character’s obsession. “I’ve always loved firetrucks. They are my favorite of all trucks. They are the truck that has the most power and also has water. How could you hate a firetruck? If I could live my whole life in a firetruck, like a bunny, I would do that.”

Rodriguez laughed about Cranston on set. “Boy, oh boy, he’d like break into his little Walter White character every once in a while and start getting a little aggressive.” Cranston laughed at that.

Rodriguez went on to praise the people doing the mo-cap work, like Ben Bishop who was Ivan. “He’d be wearing spandex all over his body, and these stilts. I could watch the film and I could actually see so much of his performance. I could see so much what he gave to the character’s physicality… it was really kind of incredible to work alongside him.”

Are you guys checking out The One and Only Ivan when it hits Disney+ on August 14? Let us know in the comments.

Disney+ has revealed the new Clouds trailer, which gives you a new look at the movie inspired by the incredible true story....
Read more
Streaming

Disney+ has revealed new The Mandalorian Season 2 posters which you can check out below. The second season of the popular series...
Read more
Movies

Angelina Jolie and Christoph Waltz to Star in Every Note Played