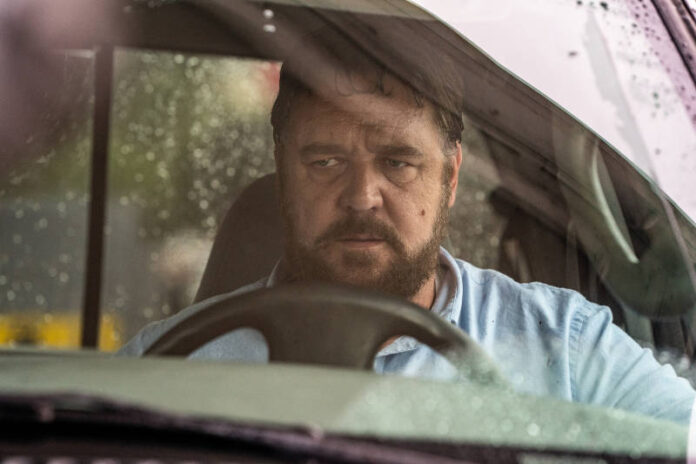 Unhinged is unapologetic trash. That’s not a bad thing. Good trash can be great. But there’s not much worse than bad trash.

Unhinged is not good trash.

Its story is rote, and its characters are one-dimensional given the briefest of lip service to their inner motivations in order to get them in place for its thriller sequences. As a result, there is no reason to care for anyone in the film or what is happening to them. It exists only to glory in Russell Crowe‘s violent outbursts and Pistorius’ manic reactions.

Anything even remotely entertaining comes from Crowe’s ability to be menacing, but that only goes so far and there’s nothing beneath it. It’s not as over the top as it thinks it is and not deep enough to survive that loss. Unhinged is too undercooked to provoke the visceral reaction it is looking for.

Rachel Hunter (Caren Pistorius) is not having a good day. She’s late to get her son to school, late to meet with her most important client and fighting with her ex-husband. It’s a bad day about to get worse when her growing frustration causes her to honk and yell at Tom Cooper (Crowe), unaware of his penchant for violent outbursts.

She quickly becomes aware as he begins aggressively following her and, after stealing her cell phone, assaulting the significant people in her life in order to ‘teach her a lesson.’ When his focus falls on her son Kyle (Gabriel Bateman), Rachel realizes she must stop running from her harasser and face him on her terms.

None of this is the fault of the actors. Everyone involved tries very hard with what they’ve got to work with. It shouldn’t be a surprise to anyone to say that Russell Crowe is the best thing in Unhinged. That is not a knock on the rest of the cast, he just has the most skill and experience in getting something out of weak writing. He also has the instinct to match what his character is (such as it is) and what level of scenery chewing he needs; he’s the villain in a trash film and he knows it.

By comparison, Pistorius has the closest to a fully fleshed out character which gives her the most to do before eventually settling into a version of sustained panic as the film quickly finds a groove and sticks to it. As rote as it is, it’s more than anyone else as the supporting cast exists mainly to be terrified and killed. On the one hand it provides a tight 90-minute running time with little in the way of filler. On the other, character development is generally reduced to close-ups of shaky hands opening pill bottles.

And that’s just one type of close-up, as Unhinged‘s claustrophobic nature (taking place mainly in cars) lets director Derrick Borte (The Joneses) run the gamut. Just as with his actors, Borte does as much with the material as he can. The camerawork during the chase sequences is taut, putting the audience in the action without resorting to too much choppy handheld work or overuse of quick cuts. He makes good use of the limited mise en scène he has to work with to fill in the screenplay’s gaps, locking us into the characters with alternating perspectives.

Crowe is almost always shown in a tight close-up (at least in part because he is frequently behind the wheel of his truck) – we are as stuck in his head as he is and the pressure of the close-up enhances every bad decision he is about to make. Pistorius, by counterpoint is more often in wide and medium shots as she stares around the world, searching for which direction danger may come from.

It’s an interesting visual take on what is ultimately not an interesting script. Carl Ellsworth launched his feature career writing really good trash (Red Eye) and some of that is evident here. There are a few moments of genuine menace built off dramatic irony once Tom gets his hands on Rachel’s phone and there are some interesting subversions of standard thriller tropes.

Concerned citizens actually try and help Rachel and the police immediately believe her and react accordingly, but because she must stay isolated for the climax, everything they do must be ultimately useless. Unhinged is a runaway car on the freeway, trapped in a one-way trajectory visible moment it begins until Pistorius utters her de rigueur bad-guy defeating one liner [A one liner so long and convoluted she has to say it at the speed of light to get it out.]

The bones of an enjoyable thriller are here. But there’s no meat on them.

Russell Crowe Can Happen to Anyone in the Unhinged Poster

Solstice Studios has provided Vital Thrills with the official Unhinged poster, which you can view in full below. The movie will mark...
Read more
Movies

The glass-is-half-empty among us have been decrying the death of cinema for many years, triggered by the increasing focus on reinventing old...
Read more