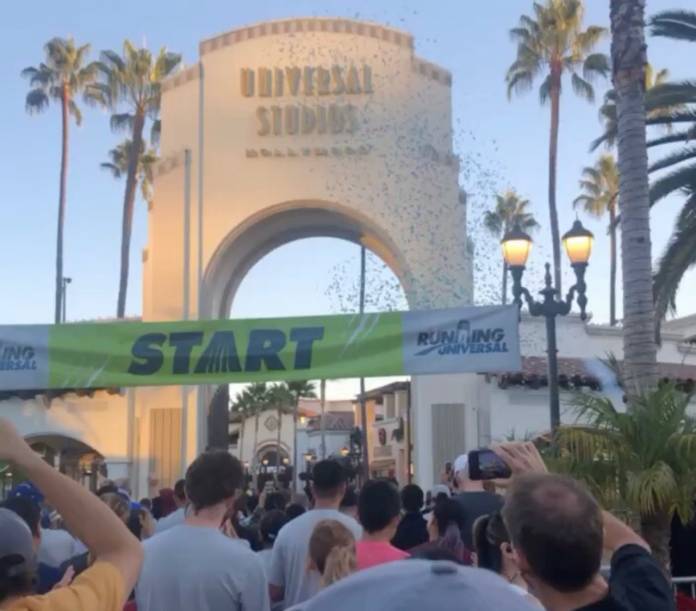 About six weeks ago, I got a press pass to cover the Running Universal Featuring Jurassic World 10K race. I’m a pretty athletic person, so I figured I could do this. I’m not a runner though, so I started training right away. Having never done one of these before, I thought I’d share what the experience was like. 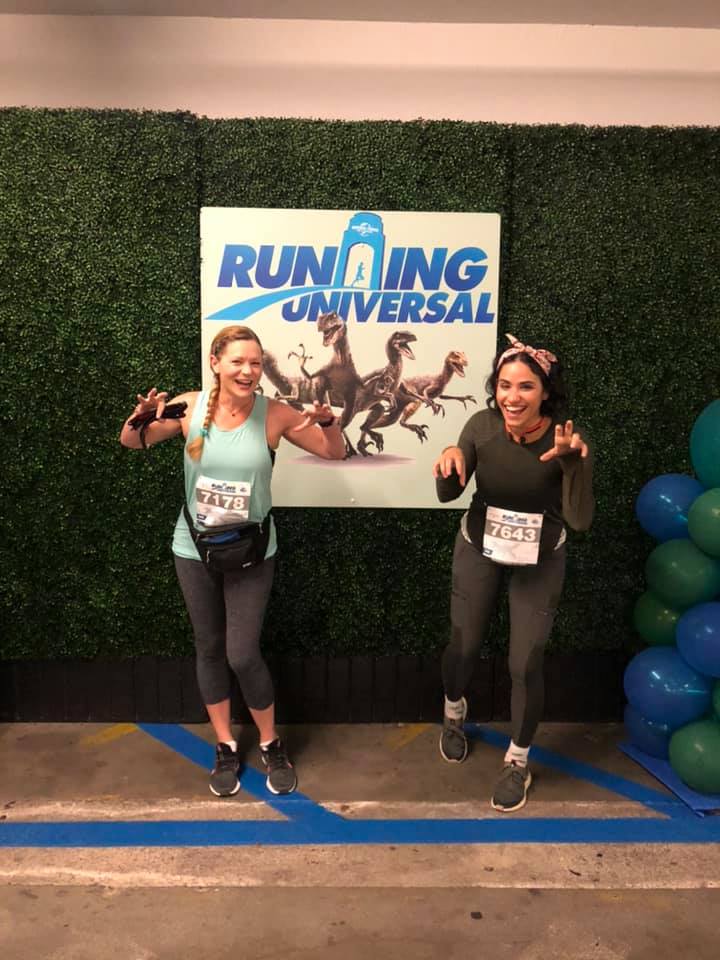 I have friends who do these theme park races all the time, and they always look like fun. People dress in costume, there are medals and it all appears to be a total blast. This time around though, there was a dinosaur medal at the end, so there was no way I wasn’t finishing this race.

Once I posted about my training, I got advice from everywhere. Here’s the best type of sneakers to use. Try these knee braces. Make sure you have energy chews. Do not forget to rest (the hardest one for me). Eat all the carbs the night before (the easiest one for me). 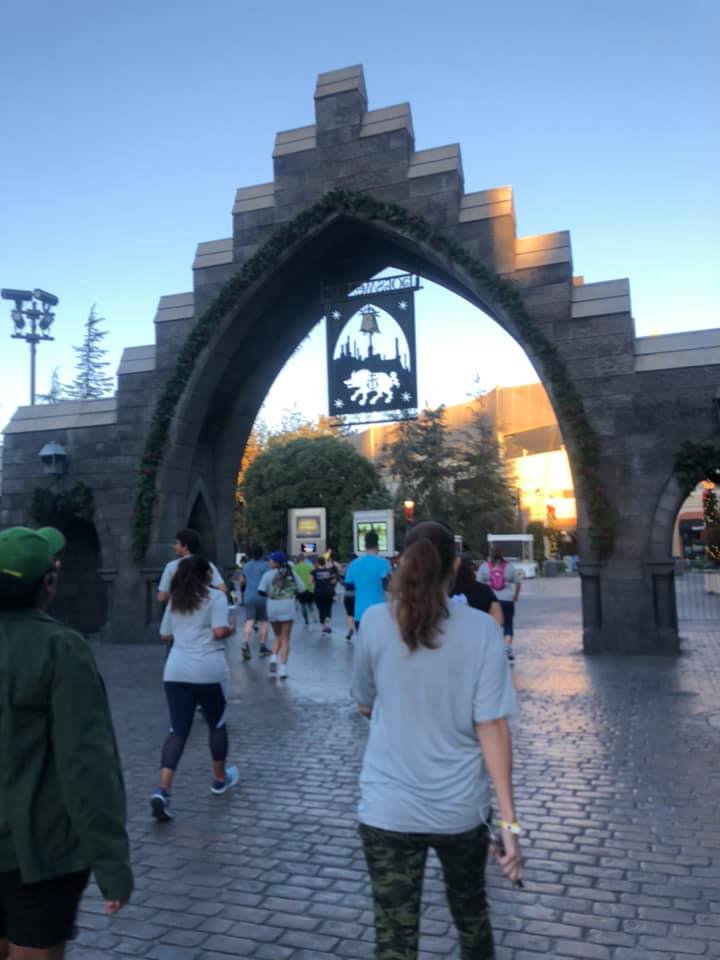 To train, I started with a 10K on a treadmill and limped the next day. From there out, I did about four 5K races a week in the gym, and a 10K every six days or so. If you’re going to do this, I would highly suggest you give yourself some time to run. Universal sends you info, and the Running Universal site has a sample training guide.

The day of the race, I got up at 4AM, the headed out to Universal Studios Hollywood. Luckily, I live pretty close. When I signed in, I got a dinosaur bag, a shirt, my bib with my number on it and I was ready to go. I met my friend Tiffany, took some pics (there are opportunities to do that everywhere) and off we went. Another important note: There are bathrooms everywhere, so you don’t have to worry about that at all.

The start of the race is staggered, something I didn’t know. There were giant confetti cannons, and they showered each group like it was the first. I do feel bad for anyone who lives nearby and heard all the chatter and booms at 6:30 in the morning. 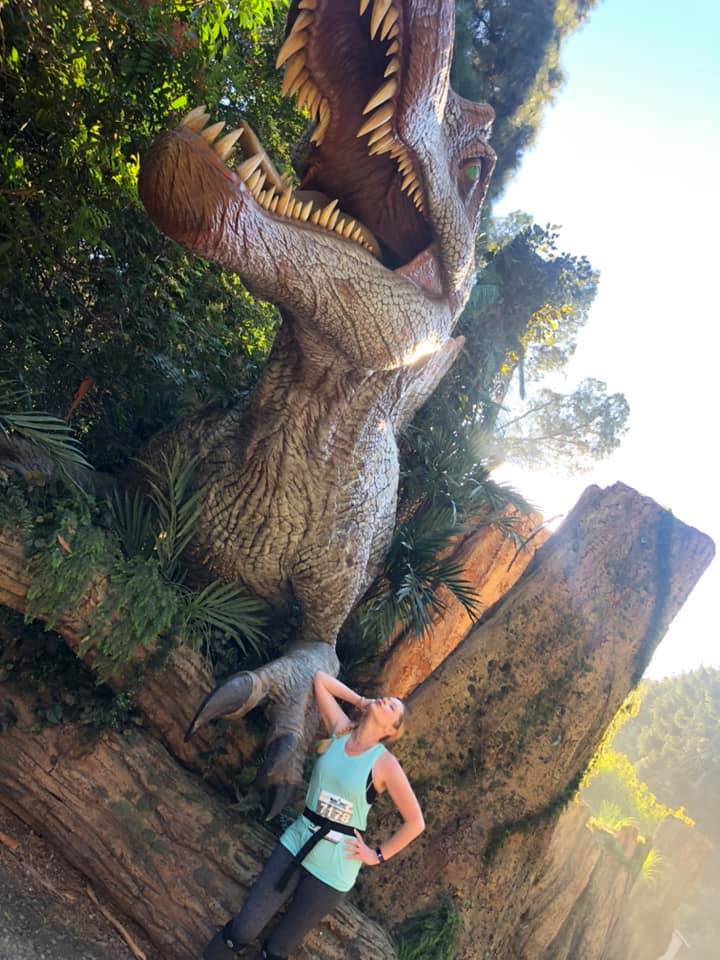 The coolest thing about the race is that you get to run all over the theme park. We started through Simpsons land, then through Hogwarts (and I can’t begin to explain how cool that was), then through the Jurassic World area, where everyone stopped to take pics with the dinosaurs. Yes, I stopped. You would do it if you got to make kissy faces at giant dinosaurs. We actually did all sorts of silly things. I posted a bunch on my Instagram if you want to check them out.

We ran past the Jaws area from the theme park’s movie tour (where they also filmed a certain scene from Season 3 of The Good Place), the Bates Motel, and the plane crash site from War of the Worlds. As we ran, we passed people dressed like lab workers from Jurassic Park, people in dinosaur hats, dinosaur onesies, which seemed really hot, as it got to 90 degrees later in the day, and more. Some people were serious about this race. Others wore Hogwarts robes and took selfies with wands at the ready. Some walked, some ran, and no one cared which group you fell into. 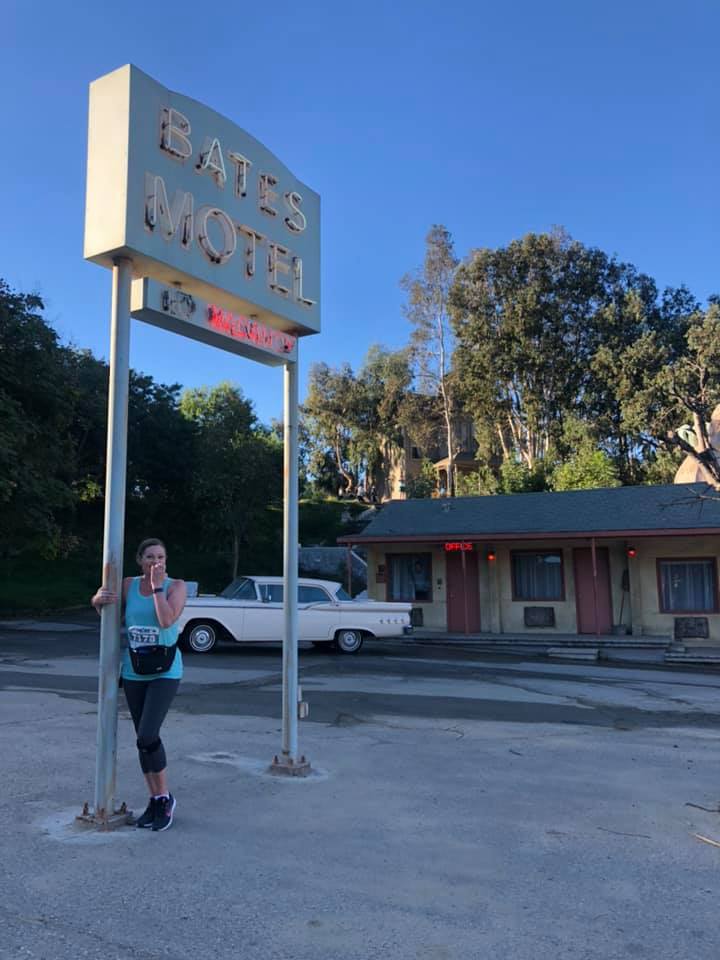 I learned that your bib has a QR code in the back, and as you run, people take pics like they do at the end of rides at the park which you can check out a few days later online. I fear looking mine up, as those pics usually feature me making a very dorky face, but it’s cool that you can get them. There is also someone who takes a pic as you cross the finish line. That QR code also gives you your run time, and after the race, your stats are emailed to you, if you care about those things.

This particular course had a lot of hills, which I probably should have trained for, but once the race was going, it didn’t matter. The atmosphere was like a giant party. My legs were jelly halfway through, but I barely noticed. There was so much to look at. 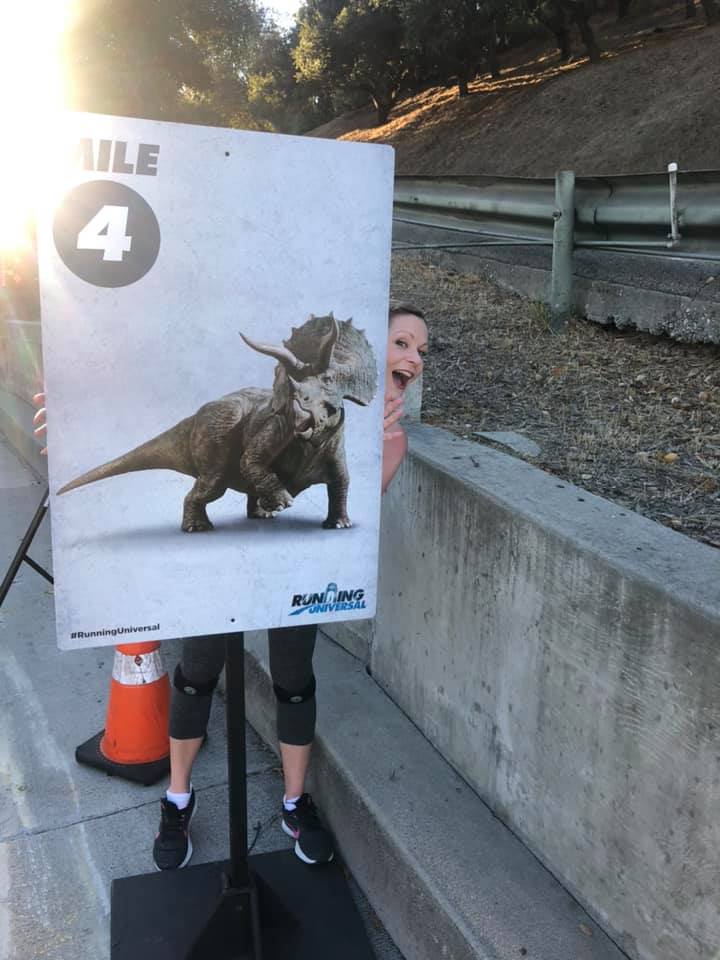 When I was training, I was really taking this seriously. I was actually nervous before the race, like I hadn’t had enough time, or that everyone was going to be better at this than I was, but none of that mattered once it started. You can take this as seriously as you like, or be as goofy as the ladies with the robes and wands. No one cares. Honestly, I would recommend this as a first race to anyone who wants to get into running. It’s such a fun way in. I’m hoping for a chance to do a half marathon at one of the parks. It might make me forget that I’m actually not the best runner.

I’m really not. I do the Insanity workout six days a week, walk eight miles most days and do yoga, so I’m fit, but running has never been my thing. I told everyone that I just wanted to accomplish this so I could say that I had (and get that medal), but now that I’ve done it, I understand why my friends do these all the time. It isn’t about how fast you do it (unless you want it to be), or if you have to walk up hills or if you brought enough water. (They have water stations everywhere, so you don’t have to.) It’s about getting up early with hundreds of other people, acting like goofballs, wearing dinosaur hats and having fun. 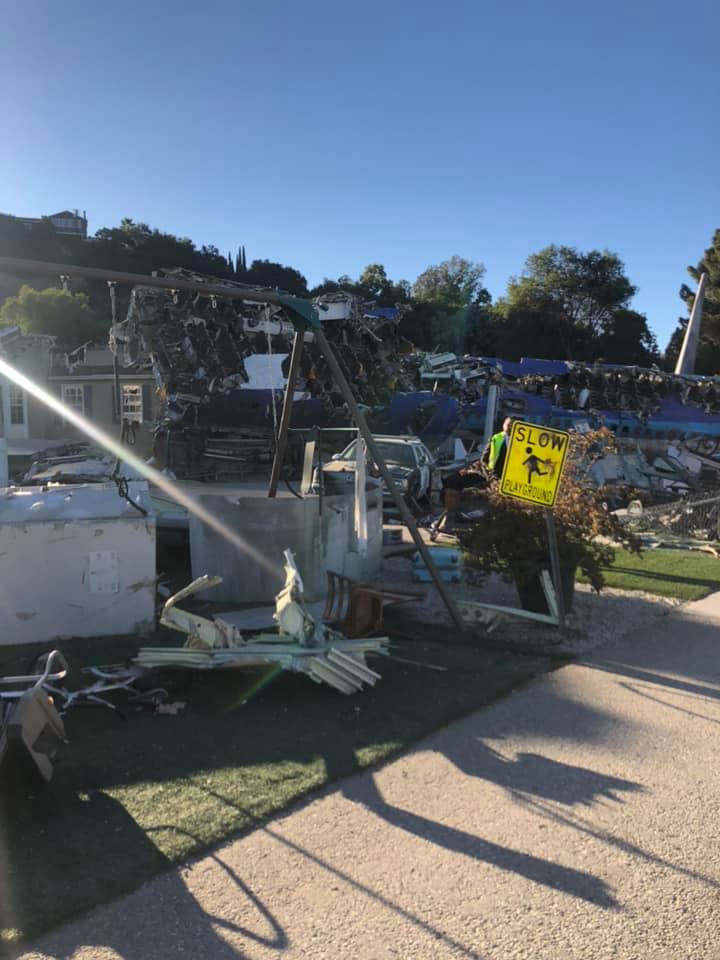 That said, when we got to CityWalk, right outside the big movie theater and I saw the finish line, I was so proud of myself! Tiffany and I cheered as we ran through, smiled for the camera, then accepted our medals. You guys, they are dinosaur medals! They’re also insanely heavy, and maybe one of the coolest things in my house now. Even the cat likes it!

As we grabbed our snacks, which Universal provides for you at the end, we heard the announcement that a 76-year-old woman had just crossed the finish line. I never saw her, but she is now my favorite person. Well, my favorite outside of Helen Mirren, but she doesn’t have a dinosaur medal, does she?

So, the race is done. I’m super sore. Someone is going to have to bring me things all day because I don’t want to get up and do anything after running a 10K. Also, the escalator was broken, so I actually had to walk up stairs after the race!

If you want to start small, Running Universal has a 5K as well, and a kids 1K race. There is also a medal for doing it all. You can head over to RunningUniversal.com to check out all the info. There are packages where you can hit the park as well, ones with fancy parking passes (though you get to park for free with race registration) and all sorts of info.

Looks like the next one at Universal Studios Hollywood is in April of 2020 and features DreamWorks’ Trolls. I’ll be there. Heck, maybe I’ll do something Troll-like with my hair. So, who’s running with me?

A Look at the Jurassic World: Dominion Filming

While filming is currently on hold, director Colin Trevorrow is still giving us a peek at the Jurassic World: Dominion production. The...
Read more
Theme Parks

Theme Park Closures: Updates on the Disney and Universal Parks

If you were hoping to be returning to the biggest United States theme parks anytime soon, we've got some bad news for you. In...
Read more
Theme Parks

Universal Studios Hollywood and Orlando Closing Due to Coronavirus

The Secret Life of Pets: Off the Leash! Ride Opening Date

The Secret Life of Pets: Off the Leash! opens at Universal Studios Hollywood on March 27, bringing 64 animated figures to this all-new tech-savvy...
Read more
Movies

Universal Studios Hollywood is celebrating Lunar New Year from now until February 9. We recently got a chance to check out the seasonal offerings....
Read more