Lucasfilm and ILMxLAB’s Vader Immortal – Episode III will be available for Oculus Quest and Rift on November 21 and VitalThrills.com got a chance to play through the adventure. Fans of the first two chapters in the Star Wars VR game series will know this, but you play as a smuggler with your trusty droid ZO-E3 (voiced by Maya Rudolph), who has a very special destiny.

In the story so far, you’ve been taken by Darth Vader and used to capture an artifact that will allow him to bring his beloved Padme back to life. Only you with your bloodline can help him do it. Now, you have to battle him to keep him from doing something terrible.

In the first chapter, you learned to use a lightsaber. In the second, you learned to use your Force powers. This time around, you’re going to have to use both to get yourself through to Vader. You also get to use another item that is going to make Star Wars fans very happy. There is one point in the game where you actually get to use a couple of thermal detonators. You know you’ve always wanted to do that.

When you start out, The Priestess and the Black Bishop are there to explain that, as one of the bloodline, you can command an army. You just have to transfer power to The Priestess so she can distract them while you ascend Vader’s castle to confront him and destroy the artifact. Wannek is back as well, trading barbs with ZO-E3. You get to fly through a cavern, grabbing stormtroopers with your Force powers and throwing them into cavern walls. You follow ZO-E3 through the command center and throw thermal detonators into… well, you’ll like it and I don’t want to spoil anything. You also get to fight stormtroopers right in front of you. You can use your lightsaber to ricochet their blaster bolts back at them, throw them with your Force powers, or find a blaster and shoot them. Trust me, you’ll want to do all three. 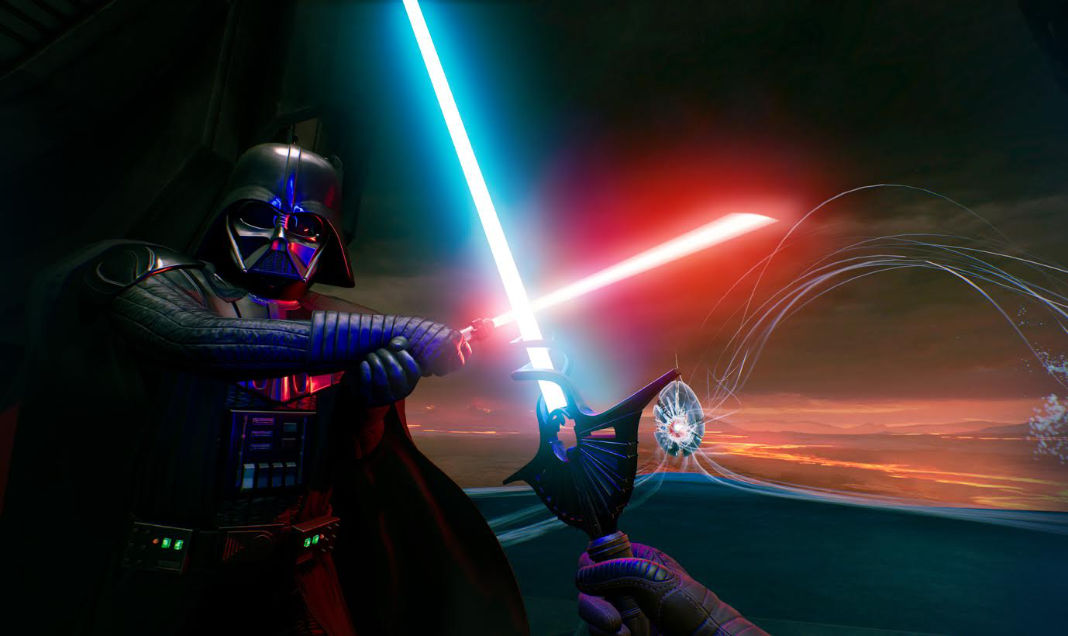 Without spoiling anything, you are going to have a 1:1 confrontation with a tie fighter that is incredibly exhilarating. When you finally have that battle with Vader, you’ll actually find yourself backing up physically. Sometimes you forget how imposing he really is after all the years of kids dressed as the character for Halloween, or plush version of him. As we have seen in other ILMxLAB experiences, he’s foreboding.

The VR is incredible here. It’s incredibly immersive. Everywhere you look, up, down, behind you… it’s all realized. As we flew to the castle on Mustafar, you could see the lava below you, and even your army crawling up the sides of the castle. Having the Priestess standing next to you and looking you in the eye doesn’t feel like a game. It’s like she’s really there. Like you could touch her arm.

The controls work beautifully once you get used to them. It really does feel like you’re battling with a lightsaber, and watching yourself actually throw stormtroopers around with your Force powers is such childhood wish fulfilment that you might find yourself tearing up.

If you’re at all concerned about vertigo or nausea, you don’t have to be here. I spoke to some of the developers after the playthrough, and they went out of their way to use little tricks like making the vehicle you’re on while flying through the cavern long, so you have a sort of horizon to look at. I’m someone who gets vertigo very easily. Some games are good, but you still feel a little off kilter when you’re done. I didn’t feel that at all here.

Ultimately, though the chapters in the game are somewhat short, it’s worth every second that you get to stay in that world. There is also the Lightsaber Dojo III, which we didn’t get to check out, but that allows you to practice your skills. You probably won’t want to leave that either.

Next
Pom Klementieff Joins the Next Two Mission: Impossible Movie
Click here to cancel reply.
Disclaimer: This post may contain affiliate links through which we earn a commission if you decide to make a purchase, at no cost to you. As an Amazon Associate, we earn from qualifying purchases.