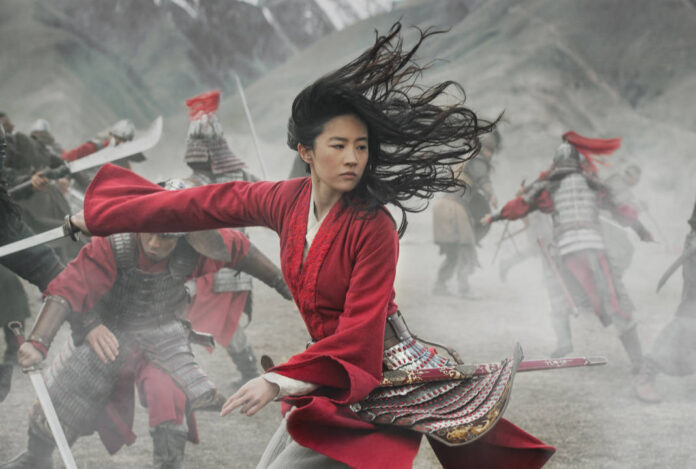 Mulan was a film that so many of us were waiting to see back when it was supposed to debut in March. The premiere was held right before the shutdown. Then it was put off because of the global health crisis.

With things being so dicey in terms of theaters, Disney decided to release it for $29.99 on Disney+. Whether that business model is going to work moving forward or not is a discussion for another time.

It’s been a very, very long time since I saw the animated version from 1998. In fact, I saw it in the theater that year, and haven’t seen it since. I loved it, so I wanted to go in to this one fresh.

There are things that reminded me of the animated version, but this is a completely standalone movie. There are nods, including one absolutely beautiful one towards the end. (If you don’t know what it is, please don’t look it up. It made me burst into happy tears, and I want you to have the same experience.) I feel comfortable saying that this is its own thing. Now that that is out of the way…

Fans of the animated film, and of the Ballad of Mulan will recognize the story. The Emperor of China (Jet Li) requires one man per family to fight in the Imperial Army to defend the country. Hua Mulan’s (Yifei Liu) father is not well, and Mulan, who has been learning to fight (quietly, after a childhood incident) her whole life sneaks out and joins in his place, disguising herself as a man hamed Hua Jun. She learns to fight, while dealing with the guilt of not being “Loyal, brave and true” as the engraving on her father’s sword says she must be.

There is a love interest in Chen Honghui (Yoson An), though it’s less played upon than the love story in the animated version (It’s there though, and what we do see is lovely.) This time around, there is a new villain. Gong Li plays Xian Lang, a sorceress who can transform into a bird and who is working for Bori Khan (Jason Scott Lee). Mulan must fight for her life and her country, while keeping her secret safe.

For those of us who already know the story, this version of Mulan allows us to sit back and take in the gorgeous landscape, the action, and the comedy from Mulan’s family and from some of the soldiers, who really don’t get why Hua Jun isn’t showering.

Having a new villain in there makes it so much more compelling, and Gong Li shines. It’s not because her character is so full of magic. In fact, the level of magic in this world is just enough. More on that later. She isn’t just a device. Xian Lang is another woman, who’s been relegated to the background in her world, as Mulan has in her own. It spoke to me. Women (and anyone else) who want to break through the boundaries that society binds them with are not anomalies.

Lang’s arc reminds me of that moment from Game of Thrones where Arya runs into Brienne and marvels that she isn’t the only girl who wants to fight. That was added for the TV version, just as Xian Lang was added to the live-action version of this story. Both work so beautifully that I want to watch again, just for the moments where they’re on screen together.

Yifei Liu perfectly encapsulates the character/legend that we know and love. As you’ve likely seen in the clip of Hua Mulan’s meeting with the matchmaker, she’s got the comedy down. More importantly, she’s got all the determination of a woman who is doing what she knows in her heart that she must. She’s a slightly more mature version of the character we see in the animated film. At least it felt that way. She’s majestic in the scenes when she’s allowed to be herself. She’s determined in the ones where she isn’t, and you can see her guilt coming through, even while she knows that what she’s doing is the right thing. Liu is absolutely a standout.

Director Niki Caro had her work cut out for her here. Will there be music? Why do a live-action version when we already love the animated one? The online grumbling when this was first announced was pretty loud. They’ll likely shut up now. The film is gorgeous. It’s beautiful. You can feel the heart of it in every moment, even during the action scenes, which were handled with stunning precision. Caro’s work hooked me from the first scene. Even the characters who only have small moments like Cricket (Yun Ju) make you fall in love with them.

Another thing that Caro handles well here is the mix of magic and reality. So much folklore has an overabundance of magic, and while that can be cool in its own right, it can sometimes be too much. Here we see it in Xian Lang’s transformations, but you can almost see a storyteller adding that to explain the seemingly mysterious success of a woman working for the Khan, or to explain why a mere woman (ahem) has such power. It feels right for the story, as if it’s being told to us around a fire.

The later fight scenes have moments that would be a bit unbelievable if you saw them in a normal film, but they’re the same level of magic that we’ve had throughout the film. It never feels like our hero succeeds because of magic, but instead prevails because of Caro’s will and her skill. The magic is seasoning on a really good meal.

I do want to mention the music. Fans of the animated film will notice moments where the soundtrack nods to the music we’re all familiar with. It’s just enough of an homage to the original that it all feels just… right.

I didn’t realize how much I needed to see something like this right now. I think you’ll probably feel the same. Whether or not the business model of a premiere package on a streaming service proves to be sustainable, this is a movie worth shelling out the money for. It was definitely worth the wait.

The Mulan cast that includes Yifei Liu as Mulan, Donnie Yen as Commander Tung, Tzi Ma as Zhou, Jason Scott Lee as Böri Khan, Yoson An as Honghui, Ron Yuan as Sergeant Qiang, Gong Li as Xianniang, and Jet Li as the Emperor.

Starting September 4, with Premier Access, viewers can watch Mulan before it’s available to all Disney+ subscribers. Disney+ will offer Premier Access to Mulan for $29.99 on DisneyPlus.com and select platforms.

What did you think of our Mulan review? Are you going to pay to see the film on Disney+? Let us know in the comments or tweet us @vitalthrillscom!

The purpose of Star Wars Thrills is to put all the Star Wars news from the last week and a half in one location. This week,...
Read more
Streaming

Today, Disney has released the new Godmothered trailer. The movie will be available to watch on Disney+ on December 4, 2020. You can check...
Read more
Streaming

‘Tis the season for streaming, and this year Disney+ is decking the halls and spreading the cheer with a heartwarming collection of some of...
Read more
Streaming

The purpose of Star Wars Thrills is to put all the Star Wars news from the last week in one location. This week, we've got updates...
Read more

On this Thanksgiving Day, Netflix has released the official The Prom trailer and we've got a look at no less than eight character posters...
Read more

December 2020 Video Games for PlayStation Plus and Xbox Live Gold