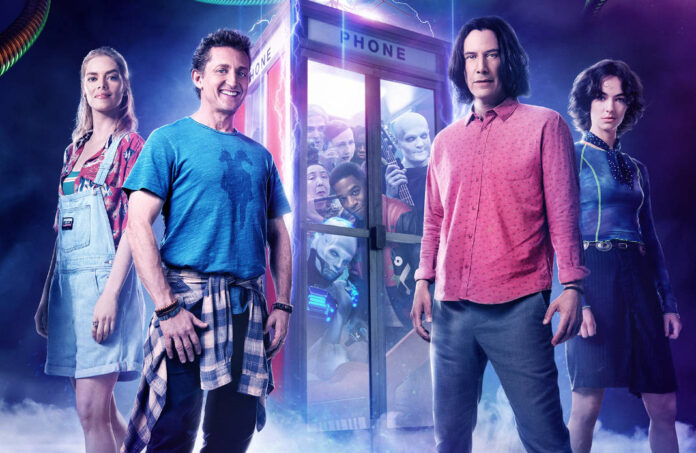 It is perhaps fitting that, like the rest of us right now living through (gesticulating wildly) All This, Bill S. Preston, Esquire (Alex Winter) and Ted “Theodore” Logan (Keanu Reeves) in Bill and Ted Face the Music are pining for simpler, happier times. After all, their greatest moments were 25 years ago, when they saw their own paths clearly, when they were assured that their song would save and unite the world, when they had everything to look forward to.

It’s one thing to be optimistic and have faith in yourself, but it’s quite another to have wise leaders from the future tell you that you are fated for greatness, or that you escape the realms of Hell, and literally defeat Death (William Sadler) itself.

But now, with all that behind them, it seems their destinies have passed them by. Not for lack of trying, of course – Bill and Ted have always been tenacious and ambitious, but somehow, somewhere, they missed a step, and now, with a failed band and careers stuck in the mud, reduced to playing at family weddings because barely anyone else will hire them, that tenacity is wearing thin.

Bill still wants to push through, but Ted has had enough. While they steadfastly cling to a past that promised a glorious future, their present is slowly crumbling around them.

Still, it’s not all dire. Bill and Ted still love their wives Elizabeth (Erinn Hayes) and Joanna (Jayma Hayes) very much, even if they are in couple’s therapy. Their daughters Billie Logan (Brigette Lundy-Paine) and Thea Preston (Samara Weaving) are smart, capable young women, with an encyclopedic knowledge of music that exceeds Bill and Ted’s own, even if they don’t have the same ambitions.

Billie and Thea have been told the stories of Bill and Ted’s youthful adventures over the years, even if they don’t quite believe them – that is, until Kelly (Kristen Schaal), daughter of Rufus (George Carlin), flies down from 700 years in the future to tell Bill and Ted that the time-space continuum is crashing all around them, and if they don’t write the Song To Save And Unite The World in the next 77 minutes, all reality in all timelines will cease to exist.

By all rights, the Bill and Ted trilogy shouldn’t exist either. Bill and Ted’s Excellent Adventure was a late 1980’s goofy, oddly paced comedy that on paper shouldn’t work at all – a Back to the Future riff with two characters that, had they been played by less capable, less charismatic actors would be far more annoying than funny. But a strange thing happened at the Circle K – there’s a joyous optimism and a sweet sensibility that makes that film work. On the surface, Bill and Ted come across as graceful idiots, but there’s a lot more going on within these two than may be apparent in a trailer. (For one thing, teenagers with a vocabulary like that were rare in any decade, even the most triumphant 1980s.)

For the sequel, Bill and Ted’s Bogus Journey, writers Chris Matheson and Ed Solomon blow up the world established in Excellent Adventure, taking Bill and Ted into the afterlife and beyond, cleverly usurping the rules of the first film. (For the record, I prefer the sequel, especially the evil Bill and Ted robots sent back in time to defeat our heroes. “Aim for the cat, dude, aim for the cat!”)

Bill and Ted Face the Music fits right with the other two films with the snap of a puzzle piece, and taken as a whole, the trilogy is this perfect thing in terms of tone and theme. It’s rare we see trilogies do that, so fans of the first two films will love this film, I predict, just as much if not more. However, if you don’t enjoy the first two films, this one won’t work for you either. They are three peas in a pod (or in a phone booth, if you prefer). It also helps to watch the first two films if you haven’t done so in a while, because so much gets paid off in this one.

Alex Winter and Keanu Reeves are wonderful here. They could have played these characters differently – more cynically perhaps, or more tempered and adult. Instead, they play Bill and Ted as a little older, a little wiser, but still full of that drive and the love of each other’s company; positive aspects that have found their way into their daughters. The filmmakers could have sewn some discord and conflict between the two as a cheap manipulation, but their friendship is tried and true and, happily, still very funny.

Alex Winter returns to acting after years of directing and producing documentaries, and it’s like he never left. Indeed, he slips right into Bill’s character effortlessly. Same goes for Keanu Reeves, and after his cameo in last year’s Always Be My Maybe, Reeves channels a lot of the same humor and energy that caused a lot of us to fall in love with him in the first place. Bill and Ted spend much of the film trying to recapture that spark they had in their youth, and without spoiling, a lot of the comedy of the film comes from those moments.

Yes, you can say that the story of Billie and Thea could be a rehash of the original Excellent Adventure. But, like the original films, it’s the chemistry and the charming, appealing performances of Brigette Lundy-Paine and Samara Weaving that win us over. Lundy-Paine has Keanu Reeves’ rhythms and cadence completely mastered, and Weaving has the same drive and tenacity in Thea that we see in her father Bill.

While both actresses are obviously riffing off Winter and Reeves’ performances, they have enough spirit and humor to make their roles their own. Billie and Thea are leaps and bounds more knowledgeable than their fathers when it comes to music, and they put that knowledge to good use.

The rest of the actors keep up admirably. It’s a pleasure to see William Sadler reprise his role as death, and I especially love the resolution between Death and Bill and Ted. I had a lot of fun with Anthony Carrigan’s Dennis McCoy, a character best saved for the movie; he plays it just as odd and weird as Sadler.

There are a few cameos also best saved for the film that are also a lot of fun to experience. The subplot involving Bill and Ted’s wives seems to run out of energy mid-film, but manages to come to a strong resolution at the end.

Bill and Ted Face the Music has an ending that you’ll probably see coming from the other end of the space-time continuum, but you likely won’t mind; it’s satisfying and full of that optimism that fans of this trilogy will recognize and cherish. It’s hard not to judge this film in the current context of our present world situation, and while the path this film has taken may not be the preferred path that newly returned studio Orion Pictures may have wanted, I can’t imagine a film more suited for its time and its release than this one.

Bill and Ted Face the Music will be available On Demand (buy at Amazon) and in select theaters on August 28.

The North American box office sprung back to life this weekend with about 62% of the domestic market now open. First place...
Read more
Streaming