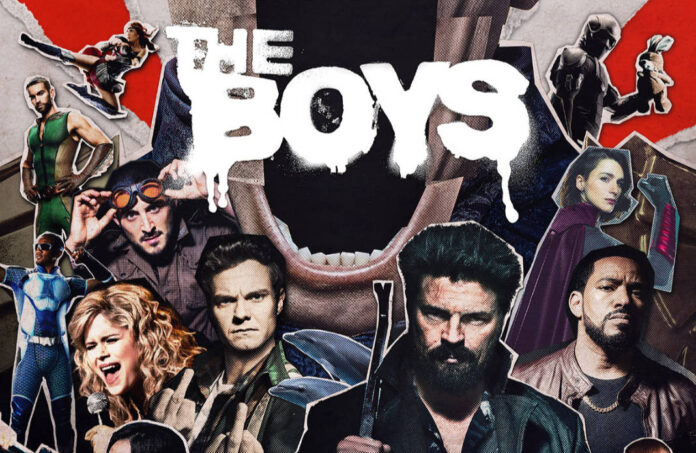 After the events of Season 1, The Boys have gone into hiding. Hughie, Mother’s Milk, Frenchie, and The Female regroup in a safe house and plan their next move. With the world and the supes looking for them, their options are limited. But with the debut of supe terrorists, they see a possible solution. By catching terrorists with powers sneaking into the country they might be able to clear their names. But can they do it without Billy Butcher?

After the revelation last season that Becca Butcher is alive and raising Homelander’s son, the world’s premier superhero has embraced fatherhood, but in his own twisted way. Homelander becomes determined to raise his son as he sees fit and make the boy fulfill his legacy. And there’s nothing that Becca can do to stand in his way.

Meanwhile, Starlight returns to Vought after resuscitating A-Train. With her cover maintained and her connection to Hughie safe, she continues her covert mission to take the corporation down.

But as Vought brings a new superheroine on board named Stormfront, the spotlight suddenly is placed on the female members of The Seven. Starlight soon finds the walls closing in on her as she discovers more of Vought’s secrets along with The Boys.

If you liked the first season of The Boys, you’ll more than likely enjoy Season 2 as it is more of the same. More humor, more superhero action, more shocks, and more gore. But the second season also manages to shine a light on a few new corners of the world thus making each episode a treat for fans.

I can’t say much without getting into spoilers, but we learn more about the past, present, and future of the superheroes in a way that makes you want to immediately binge on each new episode.

The original cast returns again in fine form. Karl Urban is still surly and tough as Billy Butcher, yet thrown off his game by the return of his wife. Jack Quaid is a great everyman as our hero Hughie Campbell. His relationship with Erin Moriarty as Starlight / Annie January continues to be a highlight of the series.

But the real focus of attention is Antony Starr as Homelander. He’s an evil, twisted version of Superman who is selfish, egotistical, perverted, and twisted. Homelander is the complete opposite of what the public believes him to be and he’s really one of the villains of the series. Yet for all the vile things that he does like murder, child abuse, and worse, Antony Starr actually manages to make him sympathetic and likable ever so briefly. It’s an impossible task for an actor, but he somehow pulls it off. You still root against Homelander by the end, but Starr makes this evil god a little human.

While the returning cast is great, the new additions are also noteworthy. Aya Cash makes the biggest impression as Stormfront. She starts out sassy, rebellious, media savvy, and irreverent. But then her character takes one dramatic turn. Then another.  Then another. Where Cash starts with Stormfront and ends with her at in the final episode is so dramatically different it’s quite impressive.

As for other new cast, Shantel VanSanten is great as Becca Butcher. She has to face both Homelander and Billy and holds her own with both. Giancarlo Esposito is also a welcome addition as Stan Edgar and his presence elevates any series he’s in.

The Boys parodies many different things. Homelander is Superman. Queen Maeve is Wonder Woman. Black Noir is Batman. And of course there is the obvious parody of right wing conservatives with the hype around patriotism, anti-terrorism, and FOX News-like news broadcasts.

But Season 2 equally skewers the left this time around as well. Hollywood is parodied as we see the making of a Seven movie and the ridiculous production behind it.  Politicians and publicists are sent up as they try and take advantage of Maeve’s sexual orientation for their own gain. Victoria Neumann is Alexandria Ocasio-Cortez. Nobody gets away unscathed in Season 2 which is a nice change of pace.

Another highlight of Season 2 is the music. Not only is there a running theme of Billy Joel songs through many of the episodes, but there are some fun original songs as well. Starlight sings a superhot-themed anthem at an event that is surprisingly good for something intended to be a hokey piece of manipulative propaganda.

You get to hear the whole song during the end credits of one episode and you’ll find yourself holding off from skipping to the next episode to listen to it. As if that wasn’t enough, A-Train gets his own theme song which is equally good and amusing. I hope all of the supes get their own songs in later seasons.

The best thing about The Boys Season 2 is that it has a satisfying ending. A lot of genre TV series start out strong and meander around mid-season before having a weak finish. Not this one. Throughout all nine episodes there’s a clear map of where they’re going and the finale does not disappoint.

While The Boys is satisfying, it’s not without its flaws. One of the trademarks of Season 1 was all of the gruesome ways the supes used their powers to kill people.  After all, that set this series apart from all other superhero shows. But now the gory kills lack the novelty they had before and they seem like a bit of a desperate attempt to shock the audience.

That especially becomes the case with Homelander’s sexual perversions. They made him shocking and frightening last season, but now it’s just gross. His fetishes, while establishing him as a psychopath, are just a turn off and make the series a little less accessible to audiences. There’s great writing and acting here, but you have to get past some of the gore and sex to appreciate it. Season 1 got by with it because of its novelty, but that novelty has worn off.

While the parody of everyone is welcome, a whole side story with The Deep joining a Scientology-like cult is just kind of dull and ultimately has little bearing on the core storyline. Chace Crawford is fun to watch as The Deep as he comically fails to redeem himself, but otherwise the story feels like something you have to wade through to get back to the interesting parts of the episodes.

During quarantine, I’ve watched a lot of new TV series with a few hits and many, many misses. Having The Boys come along right now with a second season is not only incredibly welcome because it offers new content, but it makes me further appreciate good television. You’re going to want to binge-watch every episode as fast as possible.

Season 2 will premiere on Amazon Prime Video Friday, September 4th, with new episodes available weekly through October 9th. The show has also been picked up for a third season.

Welcome to the Blumhouse Trailers Preview the First Four Films

Amazon Prime Video has brought online the individual Welcome to the Blumhouse trailers, which give you a look at the first four...
Read more
Movies

Mulan was a film that so many of us were waiting to see back when it was supposed to debut in March....
Read more
Streaming

Welcome to the Blumhouse Trailer Previews the First Four Films

Amazon Prime Video has revealed the first Welcome to the Blumhouse trailer, which you can watch using the player below. The Welcome...
Read more
Movies

Amazon Studios has acquired worldwide rights to Oscar-nominated and Emmy-winning filmmaker Matthew Heineman’s The Boy from Medellín, a deep-dive into the life...
Read more
Movies