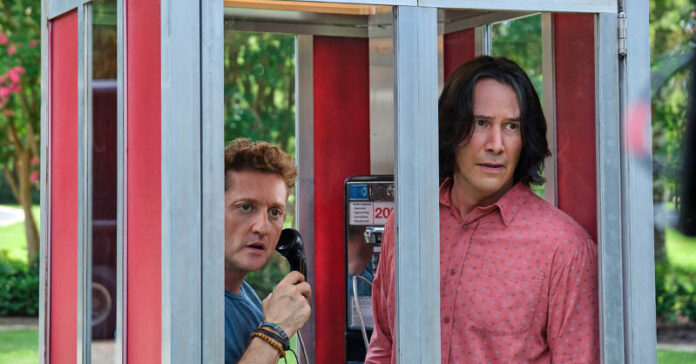 More than 19 years since the second installment debuted in theaters, Bill Preston (Alex Winter) and Ted Logan (Keanu Reeves) are finally back! Bill & Ted Face the Music will be available On Demand (pre-order at Amazon) and in select theaters on August 28.

Vital Thrills got a chance to participate in a virtual press conference with Keanu Reeves and Alex Winter. They told us all about the film, revisiting beloved characters and more.

Winter agreed: “I think Keanu summed it up pretty well. I think that the Bill and Ted movies have an inherent sweetness and an inclusivity. The idea of being kind to each other and coming together.

“That was certainly the story that Chris Matheson and Ed Solomon set out to write with the third one, many years before there was a Covid situation. It just so happens to be something that may bring some folks joy at this particular time because of that, but that was the movie that we all set out to make.”

Alex Winter also talked about how easy it was to get back into character. He said, “We had time. The film took time to get made. It went through iterations of the script that we all worked on together and that the writers put a lot of effort into. During that time it gave me a chance to wrap my head around who this guy was a this age. And Keanu and I spent a lot of time talking about those things.

“It wasn’t like I suddenly just had to turn it on like a switch. I had time to prepare. There’s also a familiarity to working with Keanu. That instinctive nature of the way we riff on the dialogue. And that stuff did just kick in on its own. It did for me, anyway. But it was helped by the fact that we had a lot of time to rehearse and prep and discuss it.”

Reeves added, “There’s been many years since we’ve seen them last, and during those years they’ve lived life, and you know, they’ve gotten mature daughters, and relationships with their wives, and they’ve been with their friendship and being together with this kind of pressure of this destiny they were given, and responsibility of uniting the world through music, that they haven’t been able to do.

“Just how do those pressures, how does that maturity, what does that look like? So to play these guys who are so familiar but not caricatures of themselves from the past, and be present so that we feel the weight of these as well as their joy and their lightness and their spirit.”

Winter talked about getting the gang back together. “I would say for me, the whole experience has a kind of warmth to it. That’s always been the case when playing these guys, because they are joyful and optimistic people, even if they’re experiencing challenges and hardships and have fear and doubt, all the human traits that we do have as characters.

“Added to that, this experience is particularly warm because so many of us are reuniting. Keanu and I already see a fair amount of each other, but we hadn’t seen or worked with William Sadler and Hal Landon Jr. and Amy Stoch again. Scott Kroopf was producing again. It was this great gang together, and just the incredible commitment of this ensemble cast we were lucky enough to have. It was a very warm experience.”

Reeves spoke about modernizing the film for today’s audience. He said, “The writers did that, you know. I think the way they structured the plot of the film, it was all about facing the music and being in the moment, so that work was kind of done for us.

“I think we see that in one of the opening sequences of Bill and Ted at the wedding ceremony. They’re not playing Van Halen riffs. They’ve expanded their musical excellence. They’ve moved on. They’ve developed the themes of the daughters using music as a kind of mashup construction in a very modern kind of idea – brought it to present day.”

Fatherhood is a new element to these characters. Alex Winter said that this was another aspect of the modernity of it. “They have very distinct lives with their wives and their partners and their parents, and they love their kids and they love their wives, and yet they’re having challenges in their lives. In typical Bill and Ted fashion, they’re very kind of simple guys who are always facing these gigantic challenges. In this case, we have not succeeded in writing the song that will save the world. And ultimately, as it turns out, reality as we know it.”

Reeves also talked about adding the actors who play their daughters into the mix. “It was a lot of fun. Bridget [Lundy-Paine] and Samara [Weaving] are just lovely people, and very very talented. [They] brought a kind of enthusiasm and craft, so it was very fun.”

In the Dean Parisot-directed movie, the stakes are higher than ever for the time-traveling exploits of William “Bill” S. Preston Esq. and Theodore “Ted” Logan. Yet to fulfill their rock and roll destiny, the now middle-aged best friends set out on a new adventure when a visitor from the future warns them that only their song can save life as we know it. Along the way, they will be helped by their daughters, a new batch of historical figures, and a few music legends — to seek the song that will set their world right and bring harmony in the universe.

Along the way, they will be helped by their daughters, a new batch of historical figures, and a few music legends – to seek the song that will set their world right and bring harmony in the universe.

Porsche 911 Turbo Rides Into the Future of Cyberpunk 2077

CD PROJEKT RED has announced today that the studio has recreated the classic Porsche 911 Turbo to be featured in its upcoming...
Read more
Games

CD PROJEKT RED aired the first Cyberpunk 2077 TV spot during Game 1 of the NBA Finals and you can now watch...
Read more
Movies

The North American box office sprung back to life this weekend with about 62% of the domestic market now open. First place...
Read more
Movies

CD PROJEKT RED has unveiled three new Cyberpunk 2077 videos, which focus on the life paths, weaponry, and music of the game....
Read more
Legion of Leia

Bill and Ted Face the Music Release Moved Up and Go Behind the Scenes!

Orion Pictures tells us that the Bill and Ted Face the Music release has been moved up a few days. You'll now...
Read more

Empire Magazine has posted some new The Suicide Squad photos from its December 2020 issue, which goes on sale Thursday, October 29. You can...
Read more

Netflix announced today that the fourth and final part of Chilling Adventures of Sabrina will launch on the streaming service Thursday, December...
Read more
Load more