There are good films and there are bad films and there are the worst films — the cinematic equivalents of a five-talent ballplayer who never gets out of the minors. They sound good on paper but just never live up to their potential. Last Christmas is one of those films which should be so much better than it is, which is a very weird thing to write about a movie based on a George Michael song. It has impeccable talent both behind and in front of the camera, a sense of warmth and whimsy — Michelle Yeoh is unironically named Santa for God’s sake — and a refusal to knuckle under to empty romantic comedy cliché. And it goes nowhere, just slowly collapsing like an overdone soufflé.

The movie is called Last Christmas, but that’s not when it’s set. Sure it takes place around Christmas, but it’s this Christmas, as in the most recent Christmas for scattershot wannabe singer Kate (Emilia Clarke). Kate is a profound mess, a Christmas store elf who is certain her several-years-long job is just a momentary stop until she makes it as a singer. Meanwhile she bops and bumps through life, discarding men, friends and places to stay through her catastrophic selfishness. The only place she can call home is her actual home, and the one place she won’t go in order to stay out of the clutches of her domineering mother (Emma Thompson). But when she meets a wistful stranger (Henry Golding) with a unique point of view, she may finally have the inspiration she needs to change her ways.

None of which, again, has anything to do with the events of the previous Christmas, nor do those events seem to be pressing on Kate in anyway. There are, eventually, subtle references to a recent illness Kate suffered and which she may be still undergoing psychic trauma from but which she hides from mightily. But subtle is all the references are – this incredibly important character motivation is left to back story and not only never dramatized and rarely even spoken of. Show, don’t tell, sure; but if you’re not going to show, please at least tell! It’s an omission built around hiding Tom’s identity and preserving a late plot point which is frankly insulting to the audience and not at all worth the protection given. Worse, those choices keep the film at a distance from the viewer for most of its run time, leaving the audience asking ‘what is happening and why do I care?’ rather than reveling in its antics.

Which all makes Last Christmas sound like a frankly terrible movie, and in lesser hands it probably would be. It would be the warning sign of holiday films stating ‘make better choices or this could happen to you.’ Director Paul Feig knows how to do comedy — even his lesser ones usually have something going for them — and the screenplay co-written by Thompson frequently sparkles with her classic one-liners asides. Each character, no matter how small, is given some element of definition (except for poor, bland Tom) to make them seem real no matter how little they appear. The cast takes to it as well, particularly Clarke and Yeoh who light up whenever they spar one another. Extended sequences with Thompson’s mama Petra do less so, as she is both nowhere near awful enough to live up to Kate’s descriptions of her and frequently falls into Eastern European tropes. Still, it’s frequently funny and rarely annoying – just sort of genteelly charming. 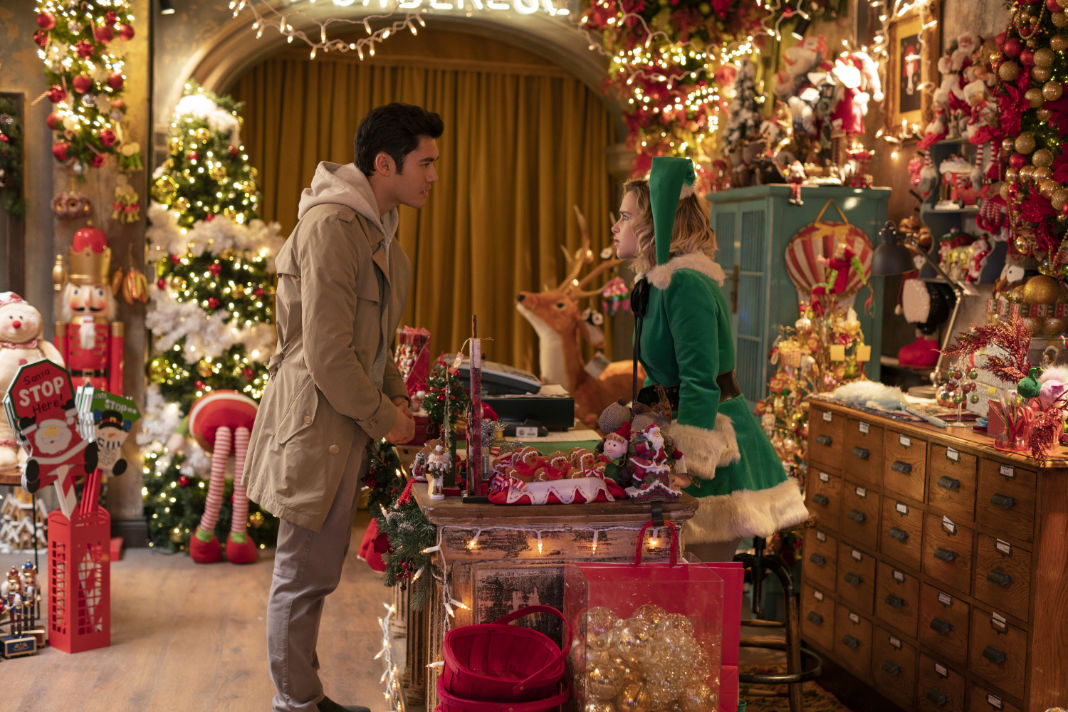 When it’s not being topical, anyway. Kate and family are emigres from the former Yugoslavia which offers up some small chances to comment on the current moment in England and its moves away from continental Europe. And small chances are all there are as Last Christmas has even less to say about the world it lives in than it does about Kate’s life, which would be fine if hadn’t also raised the question before going ‘never mind.’

With that much going wrong in one place, the charming bits must be really freakin’ charming to overcome the downside, which should give you some idea how good a lot of the character beats are. But all for naught. Everyone’s done up in the Sunday best for the party, they’ve been loaded into the car and it’s been shoved downhill without any hope or thought as to whether the road suddenly turns at the bottom. Just hold your breath and hope for the best… which turns out to be as bad a filmmaking philosophy as a life philosophy. So many missed opportunities.

Last Christmas is now playing in theaters. You can view all our updates on the movie by clicking here.

Next
Jumanji: The Video Game Launch Trailer Revealed
Click here to cancel reply.
Disclaimer: This post may contain affiliate links through which we earn a commission if you decide to make a purchase, at no cost to you. As an Amazon Associate, we earn from qualifying purchases.
BigScoots Hosting: The last host you'll ever need! Click for details.