In the trailer for Ford v Ferrari, Carroll Shelby (Matt Damon) takes Henry Ford Jr. (Tracy Letts) on something of a test ride in the new race car that has been built to attempt to beat Ferrari at the 24 Hours of Le Mans race in France. Shelby drives very fast, making hairpin turns, the race car roaring with all the power of the GT40 Ford-built engine. The car comes to a quick stop, and we see Ford tremble in what seems to be fear and terror, bursting into tears. In the context of the trailer, it’s played for humor, seemingly turning the head of a billion-dollar corporation into a blubbering cry baby. But, in the context of the film, we see that Ford is actually very emotionally moved by the tremendous display of vehicular power, fervently wishing his father was alive to see what his company had become.

And in that lies the problem with Ford v Ferrari – is this a film about the individual voice triumphantly being heard over the cacophony of a mighty corporation, sticking it to the man, so to speak? Or, underneath the slick veneer of a very mainstream film, are the themes more about the power of billions of corporate dollars stifling and consuming independent thought? The filmmakers apparently want to have audiences respond to the tenacity of Shelby and Ken Miles (Christian Bale) fighting the good fight, but in the wider scope of the film’s subject matter, it plays like a film about fiercely autonomous men being subsumed into a larger, more homogenized whole. Because, no matter how we enjoy watching these men clash with the company that employs them, it is the company that seems to get its way every time.

Here’s the thing, though – regardless of its mixed messages and themes, Ford v Ferrari is wildly entertaining and satisfying. Director James Mangold has crafted a genuine crowdpleaser in these days of superheroes and space battles, which should be a feat all its own these days. Based on the true events surrounding the 1966 24 Hours of Le Mans race, the film documents the Ford Motor Company’s efforts to beat Ferrari’s race records after years of Ferrari’s dominance on the circuit. To that end, Ford enlists Lee Iacocca (Jon Bernthal) to find the best, most knowledgeable race car driver to make it happen – Carroll Shelby, winner of the 1959 Le Mans. Shelby’s health prevents him from driving the grueling 24-hour-long race, but his friend Ken Miles is perfectly capable, if Miles could get out of his own way long enough to make it happen. Miles and the Ford Motor Company have a tempestuous relationship, and Shelby must protect his friend from suits like Leo Beebe (Josh Lucas), who would like nothing better than to take Miles out if it would boost Beebe’s position in the company.

Ford v Ferrari feels old fashioned in the best ways – I can easily see actors like Robert Redford and Paul Newman in their heyday diving into this material with real joy and enthusiasm. In fact, at one point Brad Pitt and Tom Cruise were attached, which makes perfect sense. James Mangold keeps things moving at a good pace, and invigorates the boardroom confrontations with real spunk and drama. The racing sequences are just as riveting, especially in the film’s second half when we see this new Ford motor put to the test, with all of Ken Miles’ skills on full display. This isn’t the most widely known piece of history, so for those of us unfamiliar with the story there is quite a bit of suspense to the film. 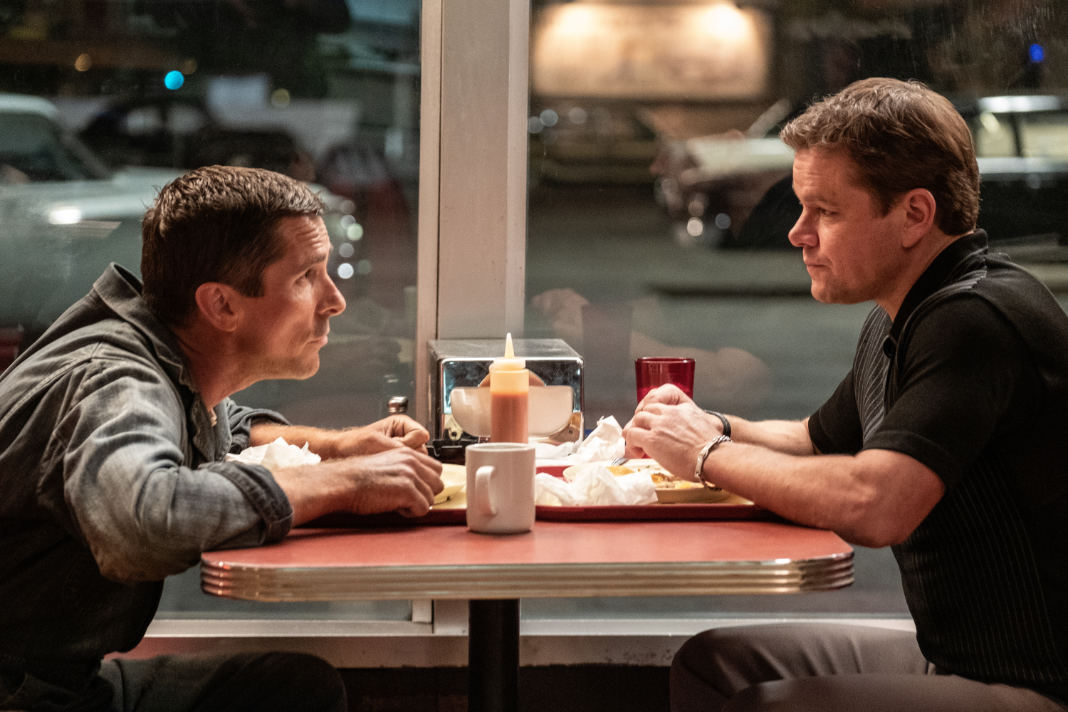 But what, exactly, is the message? It’s not easy to tell, which is why it seems like the filmmakers want to have it both ways. While both Shelby and Miles keep butting heads against the corporate tyranny of men in suits trying to tell these race car drivers how to do their jobs, one can’t help but notice that both Ford Motor Company and Ferrari are portrayed as giants of industry, and any real criticism of their practices is quickly shuffled aside in the light of the events of the film. While Ford v Ferrari is a true story, it’s all in the tone of what the filmmakers are presenting that is troubling, especially in the light of what really happened. The film needs the conflict between the drivers and the corporation to make for cinematic drama, but the reality is quite different – Ken Miles is portrayed here as a fierce competitor struggling against the bonds that Ford and Shelby constantly try to hold him back with, but accounts of Miles in real life seem to say that he was more cordial and loyal than that, even during the final moments of the climactic race. So, is Ford the villain of innovation and independent thinking? Or does everyone toe the corporate line?

An easier metaphor for the film would be to examine it in the light of modern filmmaking. In a world where we seem to have less studios but more studio oversight, where filmmakers are not given as many choices as they were in previous years, Ford v Ferrari can be a bold statement – that, in the shadow of these huge conglomerates, art can still happen. Sometimes, amidst all the pressure brought to bear, true beauty can escape, and have meaning. I prefer to look at Ford v Ferrari from that angle, because to look at it in another way seems to indicate that regardless of how we struggle against the tidal forces of the corporate sea, the corporations will always win in he end. Ford v Ferrari is a good, perfectly enjoyable movie, even while thematically, it’s spinning its wheels.

Ford v Ferrari opens in theaters on Friday, November 15. You can view all our updates on the movie by clicking here.

Next
The New Sonic the Hedgehog Trailer and Poster!
Click here to cancel reply.
Disclaimer: This post may contain affiliate links through which we earn a commission if you decide to make a purchase, at no cost to you. As an Amazon Associate, we earn from qualifying purchases.
BigScoots Hosting: The last host you'll ever need! Click for details.