When the curtain opened on the actors appearing for the Avengers: Endgame press conference, there was an audible gasp. No one had been notified about who was going to be there beforehand. Some characters that turned to dust with the snap of Thanos’ (Josh Brolin) fingers have movies coming out, of course, but who knows how we’ll get there. What we saw was a tiered stage of chairs that were only half full. There were seats left open for the fallen.

The gang couldn’t say much about the upcoming movie or the fallen, and in fact, the reporters only saw about 10 minutes of footage beforehand to preserve the secrets. There were, however, very funny moments. There was also a wonderful one where, after Favreau had only called on men in the audience to ask questions when there were plenty of women with their hands up, Larson told him to call on a woman, allowing them the last two questions. Thank you Captain Marvel!

Robert Downey Jr. was asked about his journey from Iron Man to the latest of 22 films. He said, “There’ve always been two tracks, at least for me. One is the sky is falling, the other is the sky’s the limit. I’m reminded now I was talking a lot of smack, like ‘Wait ‘til you see where this goes.’ In the moment, I was just hoping, day to day, we were making good scenes and getting good stuff in the can. I just wanted not to drop the ball.” He spoke about this being a great relay race and smiled at Brie Larson saying, “Hi Brie!” When she said hi back, he said, “God bless you. What a fun springtime you’re having.” He later spoke about one of the fallen; the Spider-Man scene in Infinity War, saying that it really hit him when he watched it with a kid who couldn’t make it to the theater. 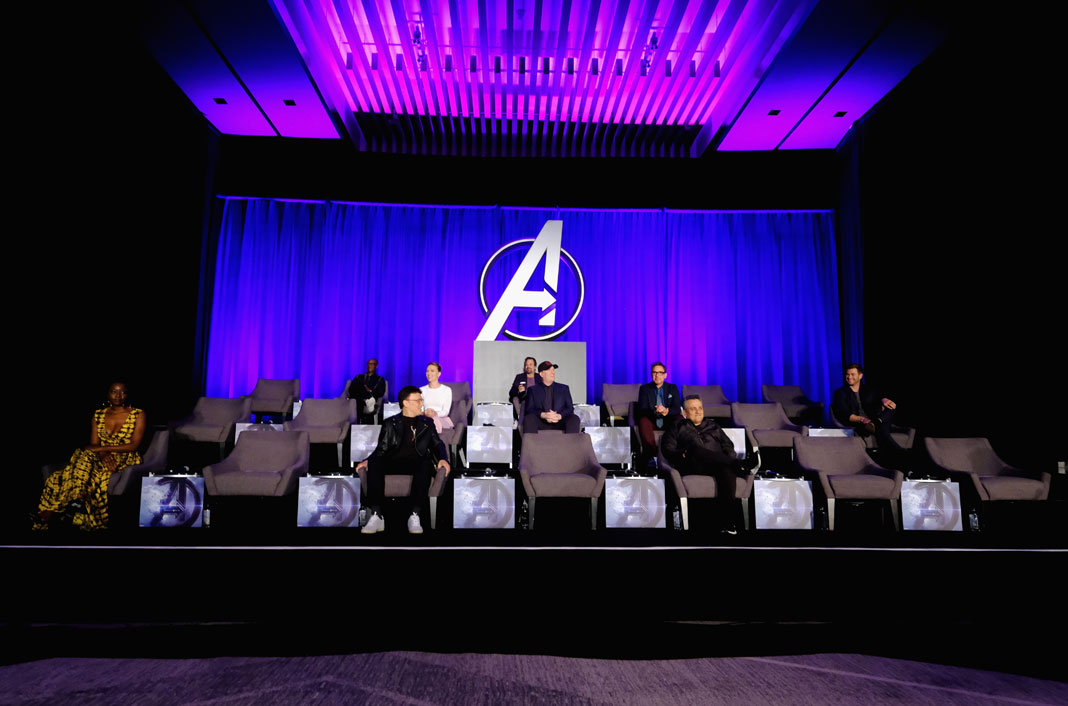 Renner said very little other than he was “rested” when asked about how he was doing. Well, it’s likely that anything he says about his character would be a spoiler if we’re reading the trailers correctly. Feige told the crowd, “About four or five years ago, we talked about what haven’t we seen in films based on comic characters. We haven’t seen an ending — definitive conclusion to an overall saga,” Feige told the crowd. “That’s why it’s called ‘Endgame,’ and that’s why I think it’s very, very, very special.” Of course we’re moving on to Phase 4, but it’s very likely that some of the characters won’t be joining us. Chris Evans continually joked about this being the end, but after the conference, everyone was speculating about whether or not that was a diversion tactic for the death of Iron Man. It seems odd that Evans would talk about it so much if it was really happening. As long as he gets that dance with Peggy!

Anthony Russo said of the film: “The story is very much about how these heroes deal with loss, resounding loss, true loss, devastating loss. How does a hero move forward from that moment?”

Joe added: “With ‘Endgame,’ we get to finish off one of the grandest experiments in movie history. We’re hoping for is that people feel satisfied with the conclusion.”

Gurira spoke about Okoye’s “fierceness” and “femininity,” saying, “What I love about her is she’s very unapologetic. She’s a traditionalist in the sense that she believes in the sovereignty of her nation. I was born here, but I was raised on the continent, and so seeing a country like Wakanda which has had no history of colonization and became so powerful, and seeing that she is the guardian of that nation really resonated with me.”

Hemsworth told the crowd that he had just come out of high school when he saw Iron Man and that he wanted to be part of that world, to borrow a phrase from another Disney film. He said, “A few years on, getting cast as Thor, and having the opportunity to embark on this thing. At the time, I thought, ‘Is this film even going to make it past DVD, make it to the cinemas, or was I going to be recast?’”

Johansson spoke about fan response to Black Widow changing her character. She said, “Initially, the character really started as a sort of sexy secretary with a skill set on the side,” she said.

“Posing as,” Favreau said, since he directed Widow’s first appearance in Iron Man 2.

“Posing as, thank you,” Johansson responded. “Then when we saw her in ‘The Avengers,’ she was one of the boys — for better or worse. That made sense then, but I think as the fans and the audiences have pushed Marvel and all the studios and filmmakers to throw up on the screen what’s going on in the zeitgeist, and wanting to see diverse films and casts, I think the character has grown in reaction to that.” 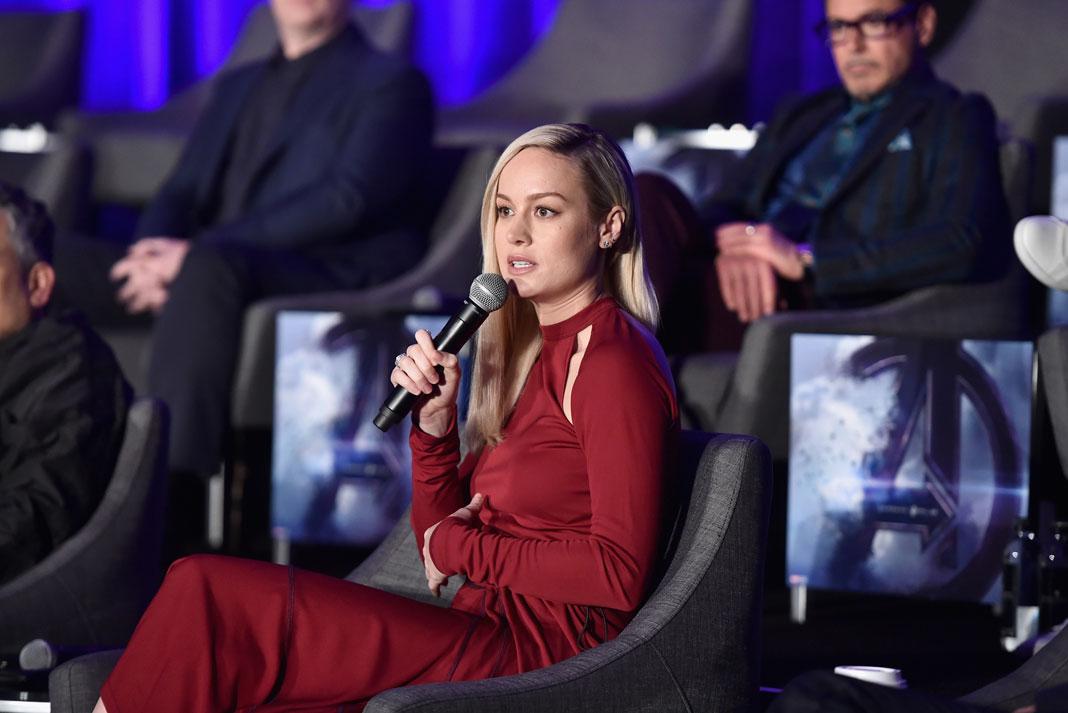 She also spoke about having more women in the MCU now. She said, “The movies have grown in reaction to that fan encouragement. I have to say when Lizzy [Elizabeth Olsen] signed on and Cobie [Smulders] was there, and we were all clinging to each other. I felt like I had been in this testosterone fest for so long. It was so nice to see other female cast members, and now with Brie [Larson] coming on and Karen [Gillan] and Danai [Gurira]. I feel like I’m amongst so many strong actors.”

Rudd joked that he was afraid to say anything, while Gillan maybe said too much? “It’s maybe safe to say she suffers from some daddy issues because her dad is Thanos, so who wouldn’t?” she said. “I’m excited for her to face the source of this abuse. She’s talked about how she wants to inflict revenge, so we all know about that. I’d like to see her try to face that.” Then she said, “I don’t know if she will. Maybe she won’t. I just got really nervous I gave something away, so I’m going to stop.”

Rudd did add, “Everyone is kind of echoing the same sentiment, which is this sense of completion of the story. It’s a weird thing to be hired and then to step into it as it’s already picked up speed. It’s like having the Beatles say, come on and jam with us.”

Then things got silly, from Joe Russo making a buzzer sound when Evans said this was the completion of an arc. When Evans spoke about family, Downey joked, “But you couldn’t make it to Rudd’s birthday last night?”

Evans said, “Yeah, okay. I didn’t make it. It was a long day yesterday. Sorry, Paul.”

Favreau said, “You had a birthday party?”

“Did you go?” Evans said to Downey.

Cheadle said, “Rhodey obviously started as a lighter-toned individual, bigger than life, than I am in life. But as the character darkened and things became more compact — in the narrative — we’ve seen a real growth in this character as he’s gone through his trials and tribulations,” Ah, was that a dig at the first person cast as War Machine, Terrence Howard? The crowd certainly thought so, as they laughed. So did the cast.

The discussion dissolved into who was better at Boggle, which the cast apparently played between takes. Larson said she was the champion, but Evans said, “Nobody can beat Don, but Paul’s good, too.” Johansson agreed. Larson asked if she had selective memory, while Evans teased Ruffalo about being bad at the game, though he did find “asbestos.”

With the movie having wrapped filming earlier this month, some cast and crew apparel has surfaced that show off a new Eternals logo. The Eternals logo...
Read more
Movies

Sam Raimi in Talks to Direct Doctor Strange in the Multiverse of Madness!

Sam Raimi, who directed the first three Spider-Man movies (buy at Amazon) at Sony Pictures, is in talks to direct Marvel Studios sequel Doctor Strange in the...
Read more
TV

The Eternals Filming Wraps for a November 2020 Release

Actress Gemma Chan (Crazy Rich Asians, Humans) has revealed that The Eternals filming has wrapped for a November 6, 2020 release. On her social channels,...
Read more
Streaming

Disney has given us the first official look at Marvel Studios' The Falcon and The Winter Soldier, Loki and WandaVision series coming to the Disney+ streaming service....
Read more
Movies

The Walt Disney Studios and Marvel Studios have revealed the Black Widow Super Bowl spot, which features new footage from the anticipated movie! You can...
Read more
Movies

Captain Marvel 2 in the Works with WandaVision Writer!

Marvel Studios is in final negotiations with writer Megan McDonnell to pen the script for Captain Marvel 2, according to The Hollywood Reporter. McDonnell is...
Read more
Streaming

Following the recent Super Bowl spot and official trailer, Universal Pictures has provided us with two The Invisible Man clips, which you can watch below. The thriller is opening...
Read more

A Look Ahead at the Fifth Season of the Outlander Series

Following this weekend's premiere episode, Starz is giving us a look at what's ahead on the fifth season of the popular Outlander series. You can watch the...
Read more