If it’s not broke, don’t fix it? Or alter it in any way? This is generally the studio approach to creative decision making, and from a purely commercial standpoint it makes sense. So much effort is spent finding something which works the first time, why take risks with reinvention? Sure it impacts longevity, but weighed against the demands of instant gratification, no one cares about longevity.

The Gentlemen in question are the loosely connected men (and one solitary lady) in the orbit of London marijuana kingpin Mickey Pearson (Matthew McConaughey). A brilliant and ruthless interloper on the British gangster scene, Mickey has risen as high as his profession will allow and seeks to rise higher still after ditching his illegal reefer infrastructure to the highest bidder.

That decision brings competitors out of the woodwork, all smelling an opportunity to advance or at least to soak someone for a lot of money in their hour of need. The one thing a king can’t do easily and live is stop being king, and it’s going to take not only all of Mickey’s wits, but his sharp-as-a-knife consigliere (Charlie Hunnam) and even sharper wife (Michelle Dockery) to stop all of The Gentlemen who want a piece of Mickey’s kingdom.

Which all sounds a lot more interesting than The Gentlemen really is. As much as writer-director Guy Ritchie (Aladdin) plays around with linearity, flashbacks, flash-forwards, voiceover and delighted emphasis on cinematic trickery, there is actually nothing surprising in The Gentlemen at all. It has the usual tough guys, funny nicknames and mannerisms and a simple plot told in overly complex fashion to hide its simplicity.

Like Ritchie’s other crime comedies, those myriad twists and turns usually add up to less than the sum of their parts but also like them are entertaining enough to carry a viewer through before evaporating like smoke. Less than a complete story (pronouncements are made of serious dread, but nothing anyone actually says matters), it is an opportunity for a series of scenes where excellent actors put on accents, wigs and/or funny clothes (an entire monograph could be written about how Ritchie characters are defined by their clothes) and go to town on meaningless but interesting diction.

Everyone seems to be having a fun time with it, particularly Hunnam who seems tailor made for a Ritchie film in ways even Jason Statham and Mark Strong never managed. The only person who seems genuinely out of his depth is Jeremy Strong, whose delivery choices are just bad, emphasizing some form of effeminate mid-Atlantic boarding school survivor which introduces a tone of camp that Ritchie dialogue cannot survive. 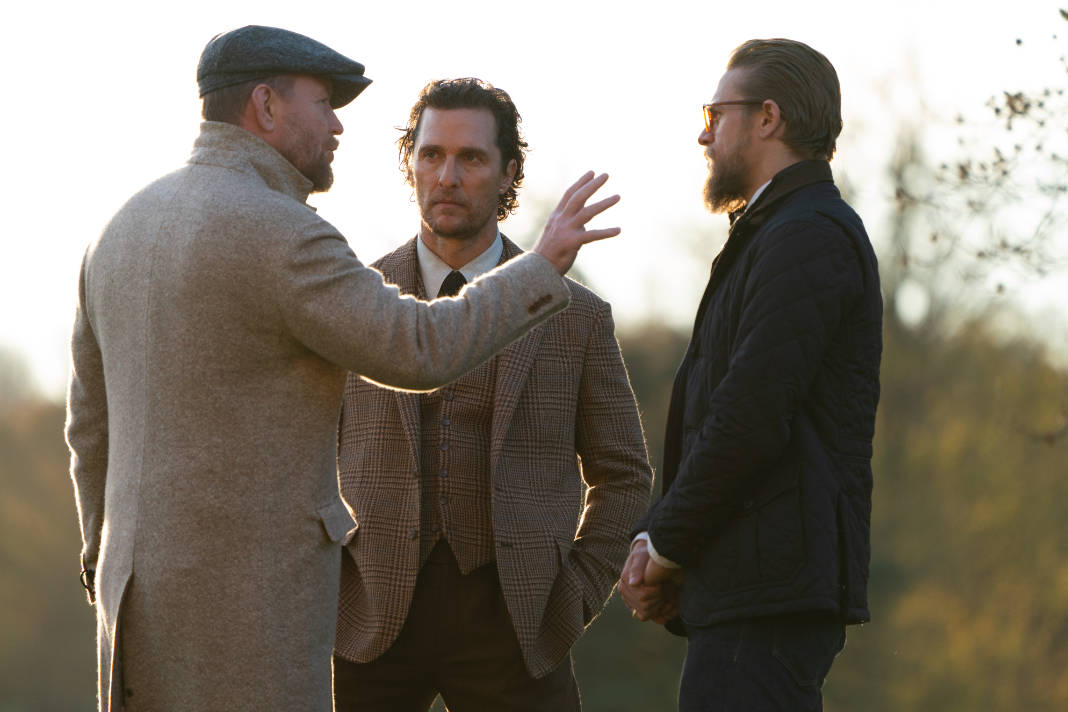 On its own, it’s just a choice which doesn’t work. In aggregate with the rest of The Gentlemen, it’s a trend which can’t be avoided. Not only is the storytelling unrepentantly unchanged for the times, so are the characters. The various gentlemen engage in various acts of casual racism, misogyny and bigotry not just as affect of who they are as people but as an overt statement that ‘this stuff is funny and people need to remember how to take a joke.’ It’s a mission statement from its director that he likes, having made these kinds of things in the past – he intends to keep doing the same way into the future and growth and change are for suckers.

The Gentlemen is an artifact of another time, a trinket found at the bottom of a time capsule with only the barest links to the modern world it finds itself in. Which isn’t to say there aren’t moments of enjoyment in it. Ritchie is a master of the individual scene in a way that brings the best out of his actors (most of the time). It’s just that I can’t tell you what any of those moments are, they disappear into the air and evaporate as soon as they arrive. Time to go back to the drawing board.

The Gentlemen opens in theaters on Friday, January 24th and is rated R for violence, language throughout, sexual references and drug content. You can view all our coverage of the movie by clicking here and you can buy tickets at Fandango.

Previous
The Road to F9 Concert and Trailer Tease

Next
Nicole Kidman Is a Suspect in the Teaser for The Undoing
Click here to cancel reply.
Disclaimer: This post may contain affiliate links through which we earn a commission if you decide to make a purchase, at no cost to you. As an Amazon Associate, we earn from qualifying purchases.
Get The FREE LEGO® Life Magazine! LEGO® Life Magazine is fun for kids 5-10 years old.