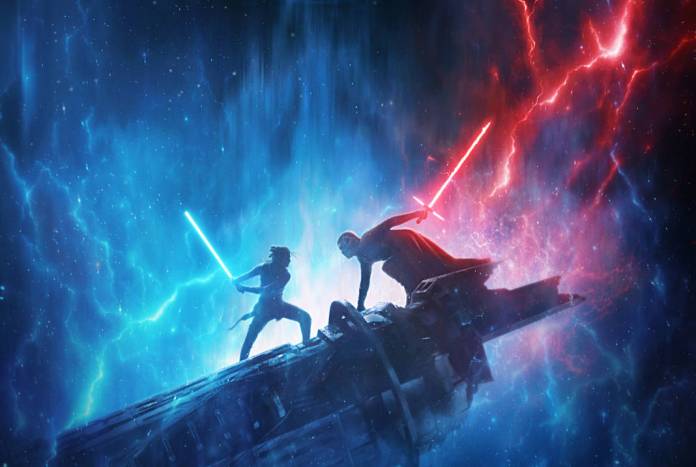 As someone who was there at the beginning that fateful summer of 1977, I’ve rode the highs and the lows of the Star Wars saga over the years. During that time, there have been, shall we say, some truths I’ve clung to that depended greatly on my own point of view. I’ve reevaluated these films so many times over the years that in the end you just have to make peace with what you love and what you don’t when it comes to Star Wars. It’s such a wide menu of choices, and everyone can take what they adore about these films and cherish them while punting the less savory aspects to the side. Ask any Star Wars fan and they’ll tell you – they just ignore the things that they don’t enjoy and focus on the things they do.

There was little in Episode IX that I could focus on, and too much that I cannot ignore, no matter how many emotional and mental exercises I try to make to justify what I saw: Star Wars: The Rise of Skywalker is a bad movie, and I wish fervently that it was not so. It breaks too many rules carefully established over the last 42 years, it is spiritually vacant that goes directly against the intentions of George Lucas in the first place, and it spends so much time fighting against the other films in the saga, especially the prequels and The Last Jedi, that it almost feels like a film made out of spite. There are wide swaths of fans who may not enjoy the prequels, but let us be fair – Lucas may not be a very funny or a very romantic man, but there was a subtext to the prequels that absolutely works in the larger scale, a worldbuilding that is deeply rooted and makes solid sense. Same for the original trilogy, although a lot of that was done on the fly. That’s because characterization was key, not some need to provide thrills every few minutes. The Rise of Skywalker cynically refuses to be quiet because it confuses silence with emptiness. It is busy, frantic, and scattered, and ignores years of established story and characterization for cheap nostalgic thrills.

The Force Awakens had a particular job to do, and while it may not have been elegant about it, it does succeed in bringing Star Wars back to a place of relative familiarity after the prequels took the saga away from its pulpy underpinnings to something wider in scope.  Rian Johnson took the ball that The Force Awakens handed to him and brought needed spirituality and a deeper context in The Last Jedi, reminding many of us why we fell in love with the saga in the first place – the themes and concepts may be boilerplate fortune cookie platitudes, but they still meant something. There was a deeper connection in The Last Jedi that felt, and still feels relevant: that it’s okay to be at your lowest point, it’s okay to fail, as long as you use those failures and struggles as a foundation to build upon.  Many fans may not have liked certain aspects of The Last Jedi, but the film provided meaning and conviction and not simply nostalgia, which The Force Awakens has in abundance. The Last Jedi is about something. The Rise of Skywalker isn’t about anything.

Now, it’s clear that J.J. Abrams loves Star Wars. He’s a part of that generation of filmmakers that was directly inspired by those films, and probably used them as fuel to become an artist in his own right. Star Wars has that effect on people. But Abrams either ignores or doesn’t understand the underpinnings of why Star Wars resonates as strongly as it does with so many of us. Star Wars never existed in a vacuum. Even from a cinematic standpoint, Star Wars was always the culmination of many decades of influences – Westerns, Japanese cinema, Saturday matinee serials, and heroic movies since the medium’s invention. Star Wars was also a response to the cynical films of the 1970s, and the malaise of a generation coming out of the Vietnam War and the tumultuous times surrounding it. Lucas also infused Star Wars with the examination of myth and why certain stories seem to resonate through the years. All the Joseph Campbell deconstruction and study of those stories roots itself in Star Wars. Then we have a sense of spirituality that, while perhaps basic and superficial at times, still infuses the films with a depth that took root in a generation of fans. None of that has seemingly registered with J.J. Abrams at all. None of that is in The Rise of Skywalker, except at a level that only works as a function of the plot. Abrams may sure enjoy driving the Star Wars car around the lot, but he has no idea how the engine works.

Then there is the rulebreaking that The Rise of Skywalker freely engages in, and that is what got me truly angry at the film. There may be rules established that we do not care for, but those rules were at least thought out and placed within for a reason. We may not like midichlorians too much, but George Lucas had his reasons for putting them into the saga, and the least The Rise of Skywalker could have done was acknowledge them. But it is quickly forgotten or ignored. Same with the concept of the Sith, or hyperspace, or even the nature of the Dark Side of the Force and the balance of the Force. The film has too much plot to stop and examine these things, and so they are freely tossed aside. The first hour of The Rise of Skywalker plays almost exactly like a video game – retrieve this item to find this item to find this person that knows where this person is being kept, and so on. The first hour of The Rise of Skywalker is terrible, terrible filmmaking, disorientating and erratic.

So what works about The Rise of Skywalker? The acting of both Daisy Ridley and Adam Driver. They manage to find an emotional center to the story and hold on to that center for dear life. Same goes with the camaraderie between Oscar Isaac and John Boyega, and, surprisingly, the work of Anthony Daniels’ C-3PO, who may have the most satisfying arc of the whole movie. Threepio has always been a lovable annoyance throughout the saga, but here he is given real agency and a purpose, and I loved seeing Daniels rise to the occasion. While the sequences with Carrie Fisher do not mesh as well as the filmmakers hoped they would, they are still effective and provide a lot of narrative drive. There is a lot of action in The Rise of Skywalker, to varying degrees of success. Abrams certainly knows how to film an action setpiece. Certainly there are a lot of thrills to be had in The Rise of Skywalker, but for the most part, they are empty thrills. There are certainly moments of weaponized nostalgia in The Rise of Skywalker that will elicit an emotional response to all but the most hardened fan – this saga is a part of so many of us, and it’s difficult to extricate Star Wars from much of our lives, and so you may be crying through moments that make no logical sense because it’s Star Wars and you just can’t help it. But the film falls apart like a Tatooine sand castle with the slightest push.

I am angry that The Rise of Skywalker ends this saga with a resounding thud. The Last Jedi set everything up to at least give the saga a deeper, more satisfying finale, even if you didn’t like how that film went about it. But so much of The Rise of Skywalker‘s fan service seem false and… well, let’s just say it, corporate. The Force Awakens was the product of that Disney/Lucasfilm sale, but it only felt like that in a few moments. The Last Jedi never did.  t the end of The Rise of Skywalker, I felt elated that the saga was over, and not in a good way. At least I can put this obsession to bed for a while. I’m sure I’ll come back to the Star Wars saga and remember it in fondness, enjoying the aspects I love while conveniently skipping over the things I don’t. But there’s too much you have to skip to make The Rise of Skywalker work in my mind. I guess I should be somewhat thankful that I can move on from Star Wars to some degree. But for now, I am angry, unsatisfied, and disappointed. This is no way to end a generations-long story, and no way to make that story resonate for generations to come.

THE RISE OF SKYWALKER REVIEW RATING: 5/10

The Walt Disney Studios and Lucasfilm’s Star Wars: The Rise of Skywalker opens in theaters the evening of Thursday, December 19. You can view all our coverage on the movie by clicking here.

Star Wars: The Rise of Skywalker
1 of 87

I saw the original Star Wars Holiday Special on television. I remember seeing it; I remember as a nine-year-old kid sitting down and enjoying...
Read more
Streaming

Millie doesn't have a lot going for her. She's unpopular at school. She's bullied by other girls as well as her teacher. Her mother is...
Read more
Streaming

The purpose of Star Wars Thrills is to put all the Star Wars news from the week of November 6, 2020 in one location. This week,...
Read more

HBO has released the trailer for "part one: rue," the first of two special Euphoria that will debut on Sunday, December 6 at 9:00...
Read more

The Trailer for Carrie Underwood’s My Gift Christmas Special