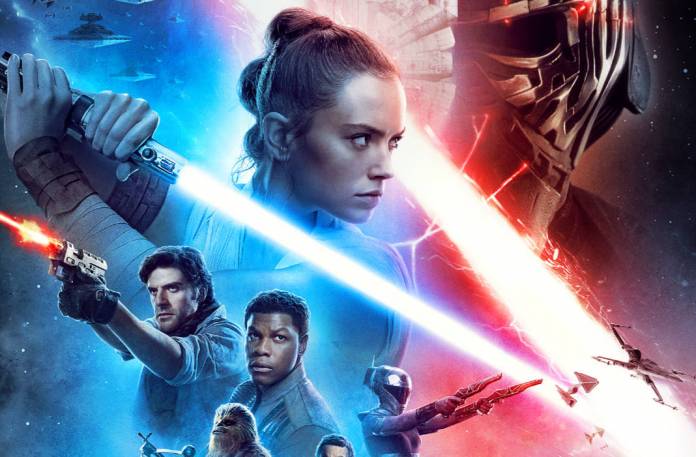 Star Wars: The Rise of Skywalker ends more than a franchise. It ends an era. Yes, we have The Mandalorian, and I love Baby Yoda (okay, The Child) with my entire heart, but this is bigger. A New Hope is my first conscious movie memory. Star Wars has literally changed my entire life and charted the course of my career. I say this because in the time it took for me to tweet my initial reaction to the film to getting down the stairs of the theater, I had a ton of angry reactions. Star Wars is a divisive fandom these days, very much split between love and hate. There are a ton of reasons for this, some from the Light side of the Force, some from the Dark, but there it is. I loved the film, so if you’re ready to argue with me before you see it, at least know that going in.

What I’m about to tell you is as spoiler-free as I can make it, and I recommend that you see this fast and stay off social media until you do. The entire movie is a spoiler, and I want you to gasp and cheer and cry like I did. Or yell at the screen if that’s how you feel.

Here’s what I can say as a set up. We find our Resistance friends shortly after we last saw them in The Last Jedi. They’ve reorganized, and are still fighting the good fight. Rey is dealing (as we see in the trailer) with her Jedi training, and things are about to go south. We’re meeting new characters, and revisiting old ones. However, there are a number of things from The Last Jedi that don’t get wrapped up, like the child at the end of the film. Make of that what you will. I enjoyed The Last Jedi, though I had some problems with it. I fall on the positive reaction side, if that helps you sort this all out. I don’t think you’ll find that The Rise of Skywalker is disrespectful to that film in any way (more on that later), but it is absolutely its own thing.

In case you’re wondering about the humor (something that was very divisive in the last film), it’s there in small bursts, but the tone here is different. The Resistance is desperate. The stakes are higher than they’ve ever been. You know, when you blow up Death Stars as a matter of course, it’s hard to raise the bar. How do you make the threat bigger? Well, J.J. Abrams managed it. This feels far more dangerous than it has in the last two films. Every living thing in the universe is in peril, and it doesn’t feel like, ooh, bring on the CGI. The most frightening thing in the film takes place on both a large scale and a personal one. Do you remember the moment in A New Hope when they make a run on the Death Star, and everyone is dying around Luke? That’s the feeling I got here when the final moments of the battle raged. (And oh my gosh, that scene! You want to praise some CGI? You will here.) That desperation. That edge of your seat, gripping the armrests sort of desperation. I mean, the Light side has to win, doesn’t it? Will it? Who will we lose? 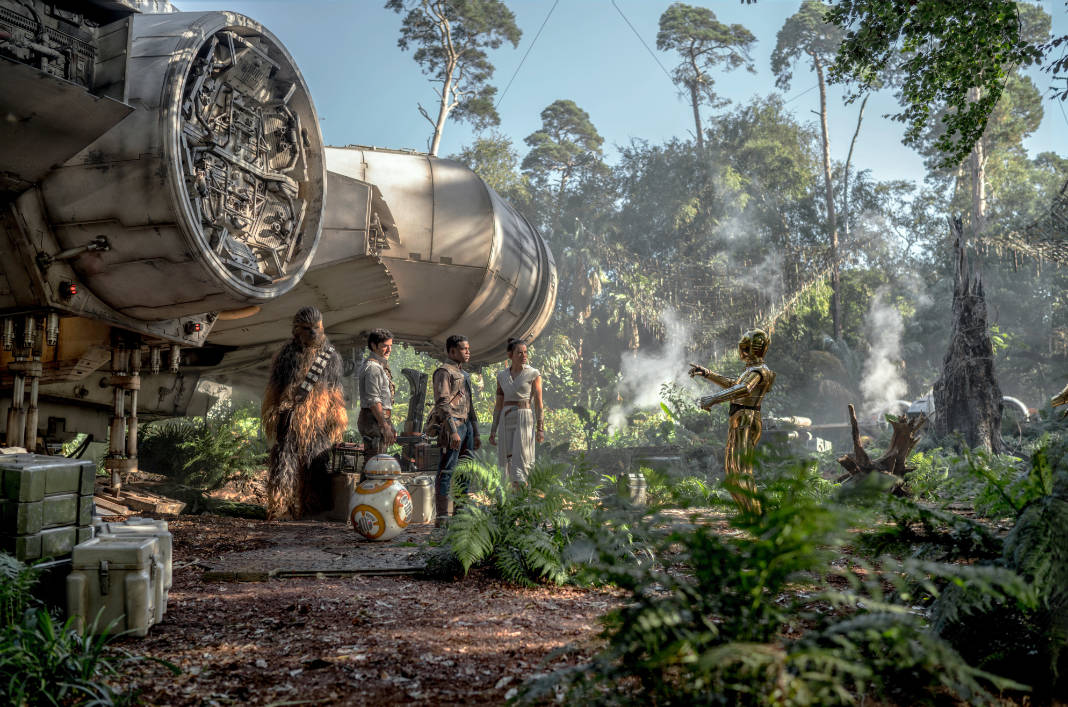 As a lifelong Star Wars fan, I thought I knew, in a vague way, what was coming in this film, but no matter what you know, there are a large number of gasp-worthy moments in this film. It’s why I’m telling you to stay off of social media. There are big ones here, though one of them happens very quickly and could have taken a bit more time to breathe. You’ll know which one when you see it. There are also heart-wrenching moments, cameos and one moment so joyful that you will find yourself holding your breath so you don’t cry.

One small thing, and though this isn’t really a spoiler, it does address a recent comment from J.J. Abrams, so skip the next paragraph if you don’t want to know.

Yes, if you hunt, you will find a certain fan favorite character. I won’t say where or how, but she’s there.

Kinda sorta spoiler over. Carry on.

We all mourned the passing of Carrie Fisher back in 2016. We all know that footage of Carrie from previous films would be used to make sure General Leia Organa was in the story. It was well done. Yes, you can tell at moments from what she’s saying that she wasn’t there, but I think in this instance, it’s okay. This isn’t a normal film, where we don’t know about the actors’ lives. This is a part of the culture. We know Carrie is gone and that they’re using scraps. We can accept what they’ve done and how they made this work. Though I’d give anything to have seen what they would have done if she was still here, we get a satisfying and beautiful ending to the story of one of our favorite characters. It hurts to think about what could have been, but Abrams did his best with what he had, and it works.

Rey’s journey comes absolutely full circle in The Rise of Skywalker. So does the story of Kylo Ren. Daisy Ridley and Adam Driver absolutely kill it here. It’s a powerful arc for both of them, with twists I did not expect. We get answers about Rey, and they’re not vague. For some, this might be a bit neat and forced. For me, it made total sense. Poe (Oscar Isaac) and Finn’s (John Boyega) stories are wonderful as well, though not as wrapped up. Sadly, Rose Tico (Kelly Marie Tran) does get less screen time than I’d hoped for. I’d say that’s my biggest issue with the film. We’re introducing a lot of new characters here, and though I love them, it does take away from one many of us have come to love. That is the place where I can agree with some criticisms of the movement from The Last Jedi to The Rise of Skywalker. We set Rose up as a main character, and her story doesn’t have much weight. 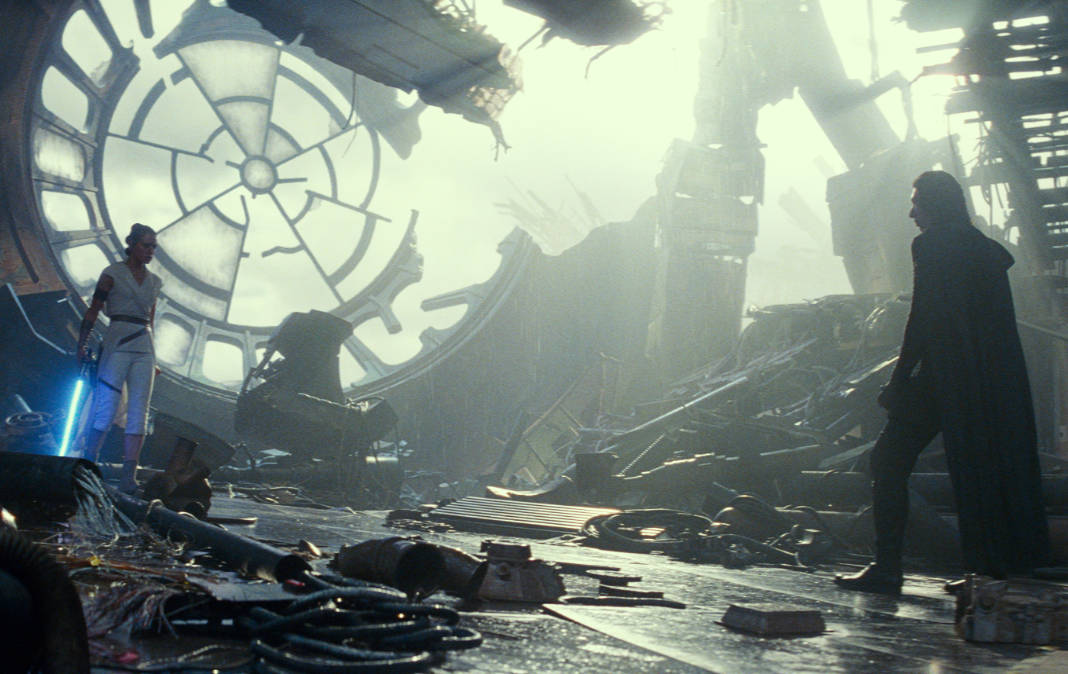 It happens with some of the new characters as well, though their arcs are more satisfying. Zori Bliss (Kerri Russell) isn’t on screen for that long, but you really get a sense of who she is and what she stands for. I would be shocked if we don’t see her pop up somewhere in the future of the Star Wars universe. Jannah (Naomi Ackie) is another wonderful addition, but I want to know so much more about her. Believe me, you’ll understand why when the film comes out. In a more complete arc, Lando Calrissian’s (Billy Dee Williams) appearance will have even the most cynical Star Wars fans cheering.

I can’t miss mentioning two new characters that had me grinning. I do sometimes get a little annoyed when things get to cutesy, but I had absolutely the opposite reaction to the new droid Dio, and the little droidsmith Babu Frick. While they’re not quite at Baby Yoda level, they’re going to be fan favorites.

As far as what gets wrapped up, well, that’s interesting. We know that this is the end of the Skywalker saga, and it feels like it. That said, there are a number of side stories, and even the future of the main one that feel like they could be expanded. I fully expect novelizations about certain new characters and the future of our heroes to appear fairly quickly. Frankly I’d love to read them. There is only so much you can take on in a single film, and introducing this many stories is bound to make you curious about where things could go.

Overall, this film is satisfying. It was the first word I thought of when I left the theater. As someone who has spent most of my life loving this franchise, with a career that has been often based around it, I left happy. I can quibble with small things, and I do think cutting some stories short was a misstep, I felt like… well, I felt like I had my old Star Wars back. Not that I don’t love the other two new films. (I did not like the prequels, though I’m not judging you if you did.) It’s all part of a larger universe that has been a part of me. Still, there was something so — again — satisfying about the first trilogy. It ended, and I felt good about it. (I was the right age for Ewoks. Fight me.) I feel good here as well. I left the theater smiling, mulling over how my heroes ended up, how they fought for the Light and how they became family. Look, many of you are going to decide to hate or love this film before you see it. That’s been very clear on Twitter. For me, I’m happy to report that I loved it, that my beloved Leia got an end to her story, and that I left feeling at peace with the ending.

Whatever you think, may the Force be with you. Always.

P.S. I will be doing a full discussion of Star Wars: The Rise of Skywalker on an episode of the Legion of Leia podcast soon, once the film is out and you’ve had a chance to see it.

Star Wars: The Rise of Skywalker
1 of 87

Previous articleStar Wars: Episode VII The Force Awakens – A Look Back
Next articleGo Behind the Scenes of Top Gun: Maverick

Lionsgate has revealed the trailer for the Chaos Walking, which is scheduled for a January 22, 2021 release. You can watch the trailer using...
Read more
Streaming

I saw the original Star Wars Holiday Special on television. I remember seeing it; I remember as a nine-year-old kid sitting down and enjoying...
Read more
Streaming

Millie doesn't have a lot going for her. She's unpopular at school. She's bullied by other girls as well as her teacher. Her mother is...
Read more

HBO has released the trailer for "part one: rue," the first of two special Euphoria that will debut on Sunday, December 6 at 9:00...
Read more

The Trailer for Carrie Underwood’s My Gift Christmas Special