Once Upon a Time… in Hollywood Review

Home » Once Upon a Time… in Hollywood Review

If it is indeed true that Quentin Tarantino is going to retire after his tenth film (Once Upon a Time… in Hollywood, for all intents and purposes, is supposed to be his ninth), he could be dangerously close to proving the old adage that it is better to burn out than to fade away. Not to make this into a history lesson, but I don’t think it can be overstated just how much of an explosion of pop culture it was when Tarantino burst out of the gate with Reservoir Dogs and Pulp Fiction. Pulp Fiction changed everything about the movies, our relationship to the movies, and the studio system. It took a few years for Hollywood to get back on the path of blockbusters and event films, but during the 1990s, the possibilities were endless, and unpredictable. Like Kurt Cobain before him, Quentin Tarantino overnight became the hero of a generation. It’s an awful lot to live up to, and while Jackie Brown may come across as more measured in comparison (I still think it’s his best film), eventually Tarantino settled into the filmmaker that we know today – dominated by his influences, while still full of individuality and his unique voice.

But now, for perhaps the first time in his career, with Once Upon a Time… in Hollywood, his influences may have overpowered that voice. Steeped in nostalgia for a time in Hollywood that just doesn’t exist anymore, it is difficult to see exactly what Tarantino is saying about the state of cinema today. He may not be saying anything at all, which is the disconcerting part. He simply may be using his gifts to transport himself (and the audience) into a different time, where television was fun but disposable, movies were wildly different from each other, and artists were unbound by a studio system that stifled their creativity. In 1969, the studios were crumbling, and no one had any idea what that meant. Lucas and Spielberg had not yet surfaced to turn movies into marketing (to hear many tell it), and when Tarantino lovingly shows us the variety of movies playing on all the marquees across Los Angeles, he is pining for a time long past. There is a sadness that fills Once Upon a Time… in Hollywood, not only for a past gone forever, but how certain pieces of history changed things for the worse, in Tarantino’s eyes.

This is a subject worthy of a movie. But it’s also a subject that needed a bit of objectivity, and that Tarantino cannot provide.  He’s simply not that kind of filmmaker. Where once he used his influences to build upon a story uniquely his own, now Tarantino is adrift in that sea, letting the tides of nostalgia take him away instead of steering the boat himself. That’s not to say that Once Upon a Time… in Hollywood isn’t a good movie; it is. But it’s a comfortable movie, and from a director that used to thrive on that dangerous, unpredictable nature of storytelling, it’s a bit surprising. Tarantino pulls out all the greatest hits from his back catalog here – deep cut music cues, a shall-we-say casual depiction of history, shocking violence played for laughs, and lots of bare feet. He’s almost as much of a fetishist as Brian De Palma. There is nothing here that we haven’t seen before, and while it’s packaged together in an entertaining way, there is a deeper sorrow at play here, of a Hollywood that might have been had history gone another way.

But unlike the audacious rewriting of history that Inglourious Basterds indulges in, a speculative approach that lets audiences play with the infinite possibilities in their collective imagination, here Tarantino plays with time to satisfy his own yearnings and dreams of a Hollywood that never came to be. Whether that is interesting enough for audiences is for them to decide; for cinephiles like myself, it is fascinating but it’s difficult to imagine how this will play for those not steeped in cinema lore or the story of that fateful spring and summer of 1969, a time where monsters quietly roamed the Hollywood Hills, biding their time before they struck terror in a city ill equipped to understand the underlying anger of a generation who promised free love and were given something else.

It is a time of vast change, not only for Hollywood but for the world, and if is a change that Rick Dalton (Leonardo DiCaprio) is powerless against. With his best friend and stunt double Cliff Booth (Brad Pitt), Dalton is coming to grips with the fact that he is quickly becoming a has-been. In those months following the release of “Easy Rider,” which dropped like an atom bomb in Hollywood, Dalton’s quaint action persona is a relic. Dalton was a star of a very successful television Western called “Bounty Law,” but his attempt to transition into film wasn’t as graceful, and in 1969 his options are limited to playing the villain in a variety of TV shows during pilot season or hopping a flight overseas to star in Italian Westerns. Cliff is also a man stuck in the middle of change – the stunt jobs aren’t coming with any regularity anymore, and no one seems to want to hire him due to his instability and the potential of a horrific act in his past. 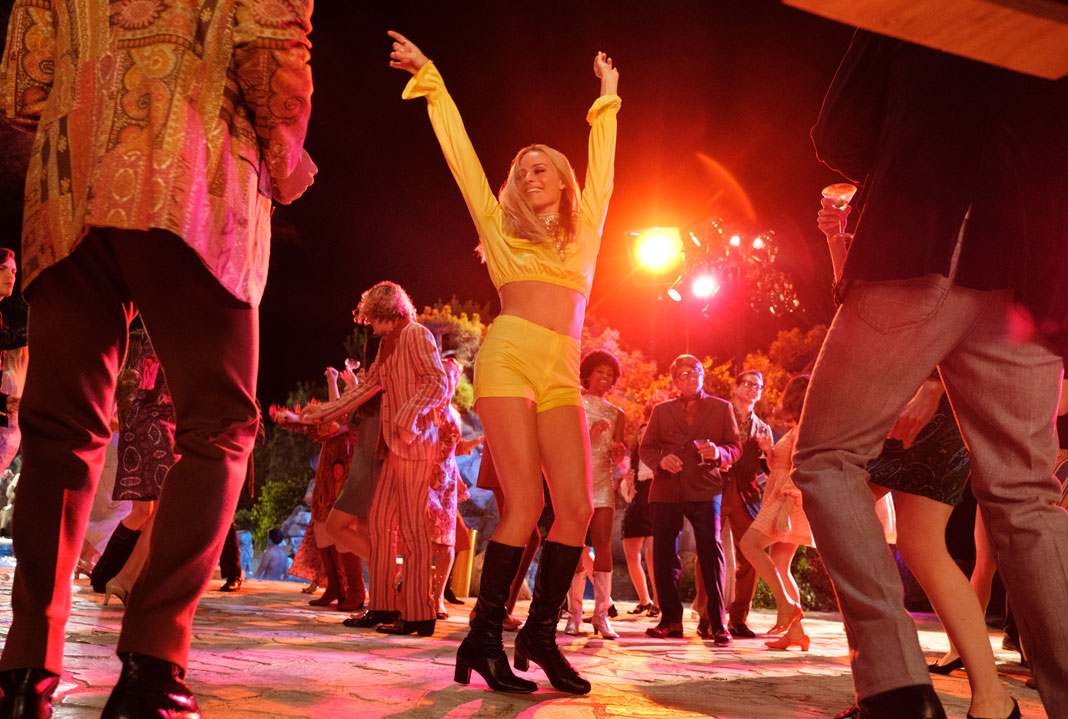 Meanwhile, next door to Rick Dalton live the Polanskis, and more specifically, Sharon Tate (Margot Robbie), a woman on the potential cusp of a very long and prosperous career. Dalton secretly hopes to maybe cross the gate and be invited into their home – Roman Polanski directed Rosemary’s Baby after all, and Dalton knows what a role in one of his movies would do for his floundering career – but in the meantime, there are pilots to shoot and a career to think about, even as Dalton can see the writing on the wall. As for Cliff Booth, his infatuation with a young hippie girl on the street threatens to bring him into a potentially bad situation, and into the circle of one Charles Manson.

Tarantino has always taken his time to tell his stories, and isn’t interested in rushing things, but Once Upon a Time… in Hollywood feels longer than many of his other films. Scenes play out with no real sense of focus, but the performances are still so strong as to overcome most of the length. Still, this film could have used, if not some tightening up around the longer sequences, a sense of urgency that was very much omnipresent in his other films. It’s too pat to say that Sally Menke was an editor that was able to say no to Tarantino’s eccentricities, but she was able to keep Tarantino’s vision intact while keeping everything paced in a lively and invigorating way. Here, Tarantino meanders – he’s always been a writer in love with his characters, but here he lets his characters get away from him and he has a hard time bringing them back. A sequence with Brad Pitt’s Cliff Booth arriving at the infamous Spahn Ranch should have been much shorter than it plays out here. On the other hand, I could have spent another hour watching Leonardo DiCaprio’s Rick Dalton fumble with a brutal hangover on the set of the new TV pilot “Lancer,” as he wrestles with his relevance and his own acting ability, as he comes to terms with the fact that his career may be coming to an end sooner than he would like. Both DiCaprio and Pitt are fantastic, and have a fireball chemistry together; you’d think they’d been performing together for years, and their camaraderie is infectious, and often quite moving.

The criticisms of Tarantino’s handling of Sharon Tate aren’t really fair in the context of the film. She’s not so much a character as a state of being. She’s meant to be a juxtaposition against Rick Dalton’s emotional state, which is melancholic and pessimistic.  Tate is sunshine, Tate is optimism, joy and bliss, and an emotional place our characters strive to be in. Margot Robbie’s terrific, too: her scenes in the movie theater are wonderful. It’s a great performance. But Tate isn’t the main thrust of the story, and wasn’t meant to be.

Does all this lack of focus, this running back into the past when Quentin Tarantino once leapt recklessly and blindly into the future, mean that Once Upon a Time… in Hollywood isn’t a trip worth taking? Absolutely not. But the Quentin Tarantino that made this film is not the same Tarantino that made Pulp Fiction. Part of that is time, change, and maturity, but part of that is, simply put, being afraid to shift the paradigm as he once did and replacing that with a nostalgia that is frankly overpowering.  Tarantino once used his past nostalgia as fuel for how we could move forward in telling great stories. Now, it feels like he simply wants to live in the past. The future of cinema is uncertain, and in a world of streaming, of digital projection, when 35mm and 70mm film are quickly going the way of the dinosaur, he simply does not know how to move forward from that.

There is much to enjoy in Once Upon a Time… in Hollywood – it’s uproariously funny at times, and these are people we love spending time with. But the threat of the razor’s blade, the wild magic of his earlier years, the dangerous chaos in a bottle that Quentin Tarantino’s films had – that feels almost gone now.  There is a sadness in Once Upon a Time… in Hollywood, as Quentin Tarantino looks at the past and dreams of a world that could have been had things happened differently, but the sadness lies in the possibility that he may no longer want to make that dream a reality any longer; that in the end, instead of stopping at a point of his own choosing, Quentin Tarantino may just be running out of things to say.

Sony Pictures will release Once Upon a Time… in Hollywood in theaters on July 26. The film is rated R for “language throughout, some strong graphic violence, drug use, and sexual references.” You can check out all of the previous updates about the movie by clicking here.

Next
It Chapter Two Vaults Experience Coming to London
Click here to cancel reply.
Disclaimer: This post may contain affiliate links through which we earn a commission if you decide to make a purchase, at no cost to you. As an Amazon Associate, we earn from qualifying purchases.