Posted on Published: May 22, 2019 Categories Featured, Legion of Leia, Movies

Much has been made in recent years of Disney’s decision to start converting its properties into live-action films. Many arguments have been made about this decision, with many even wondering what is the point. I would argue that the point of an adaptation is to not only bring the story to life but to sometimes add to the original story so as to improve it. While there has been mixed success with Disney‘s live-action films so far, I do think Disney finally hits the mark with its latest live-action adaptation. Aladdin is truly full of laughter, brightness, and color that easily immerses audiences within its world while still capturing the magic of the original animated classic.

The film tells the story of street rat Aladdin (Mena Massoud) who spends his days thieving alongside his trusted monkey companion Abu (voiced by Frank Welker). After a chance encounter with Princess Jasmine (Naomi Scott) leads him into the sinister ambitious clutches of Grand Vizier Jafar (Marwan Kenzari), his life changes forever. He ends up discovering a lamp that opens up his world to all sorts of new possibilities after accidentally setting the Genie (Will Smith) free. Freeing the Genie leads to him being given three wishes. However, Aladdin soon discovers that his discovery has attracted the attention of those with more nefarious desires. Will his desire to be seen as something more than a street rat to the Princess interfere with his ability to keep her and the kingdom of Agrabah safe? You’ll have to watch the rest of the movie to discover that for yourself.

I’ll be honest. I really wasn’t sure what to expect going in after the first trailer launch. With Robin Williams’ original performance casting a large shadow over the film and after initial reactions to the first footage of Will Smith’s Genie, I was concerned. Never mind the fact that I felt oddly protective of anyone ruining what I considered to be a classic from my childhood. However, I was pleasantly surprised and, honestly, very happy with the final cut of Aladdin. From the large scale, immersive sets to the talented cast tackling any challenge thrown their way to the music and pacing of the film, it definitely felt how I would have wanted a live-action version of the original film to be. What makes it especially work is how grounded the film feels, even with all of the magical, fantasy elements thrown into the story. This is definitely a film that will appeal to both children and grown-ups if they allow themselves to slip into the fantasy that the cast and crew have created for them. 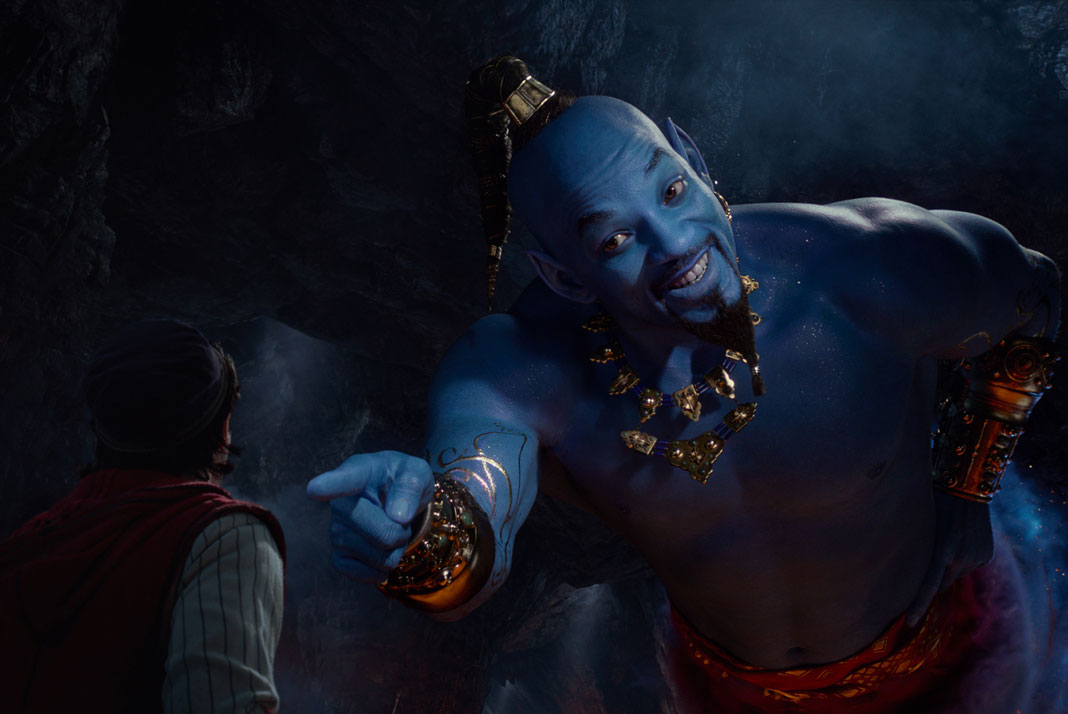 I’m going to start off with what many will be wanting to know first – the Genie. Will Smith’s performance as the Genie was easily one of the most fun parts of the film. Going into the film, he had enormous shoes to fill after the mark Robin Williams made in the original animated version. However, I honestly felt that he knocked it out of the park. What proved to be the biggest benefit for Smith was the fact that he didn’t appear to be trying to recreate the original performance. Instead, he ended up creating a version of Genie that, while still fun and silly, also provided a more subtle seriousness that balanced the character out. This ended up humanizing the Genie in a way that I think ultimately helped make the character more relatable and believable to the audience. Because of the performance, the audience couldn’t help but want to see the Genie have a happy ending. And that I think proves that Smith did a great job. If there’s anything that I can comment on, it would be his singing. While I think he nails “Friend Like Me” since it more caters to his rapping style of singing, “Prince Ali” is more mixed in terms of his delivery. However, his handling of “Arabian Nights” may be my favorite vocal performance of his.

While Will Smith did an amazing job, he did not take away the spotlight from the rest of the amazing cast, which is something that I can say is a huge difference between this film and the original animated version. Sorry, Robin. Mena Massoud perfectly embodies the scrappy, yet positive spirit of Aladdin as he runs about Agrabah trying to get by. He also nails all of his songs and you just can’t help singing along with him. The chemistry between Massoud and Naomi Scott’s Jasmine cannot be denied and seeing them play off one another was a real treat. The same note can be applied to Massoud and Will Smith, who honestly come across as not only great friends but also kind of like a mentor/mentee style of relationship.

Going back to Naomi Scott, her performance and characterization of Princess Jasmine is full of such confidence and is so empowering that I think she will end up becoming the hero for many children and adults out there as they too try to find their voice and speak out. She especially handles Jasmine’s new song with ease and raw intensity, making “Speechless” easily one of the best movie songs of the year. Marwan Kenzari’s Jafar may not be as traditionally evil as the original animated counterpart. However, his performance helps convey to the audience the character’s ambitions transcending beyond just sheer evil. This is a man that constantly needs to be the strongest, most relevant in the room and he’ll be damned if you think otherwise. 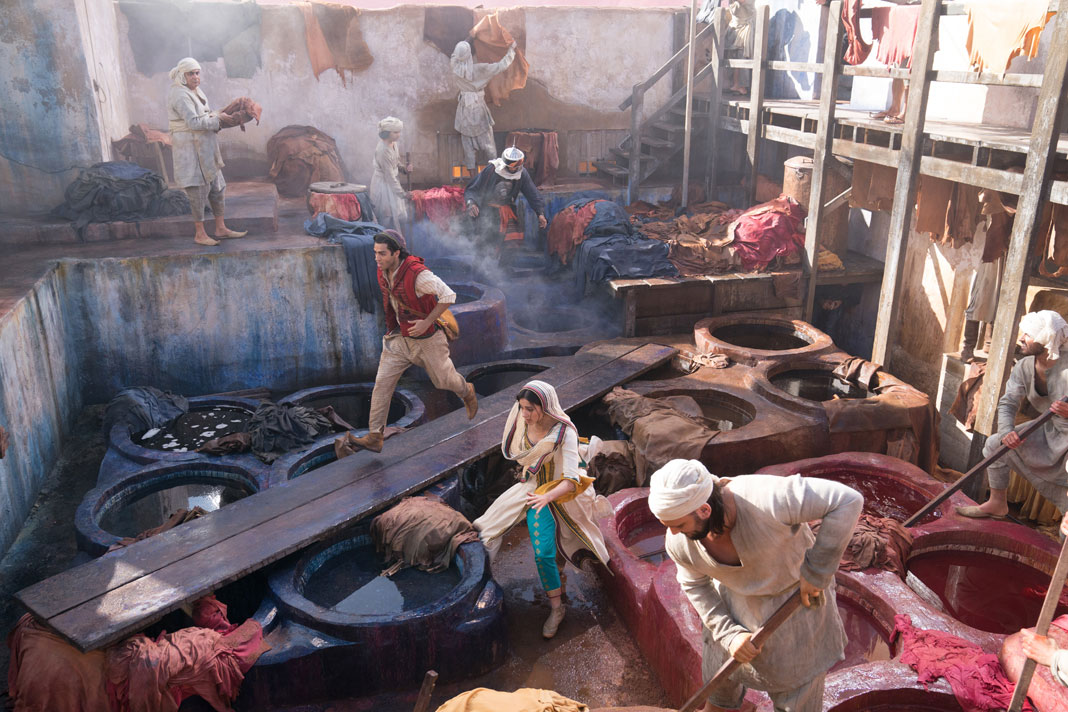 The addition of a couple of new characters into the film was unexpected but also rather refreshing. Nasim Pedrad portrays the brand-new character Dalia in the film and manages to successfully build and integrate the handmaiden into the storyline seamlessly. Her humor and improv abilities shine here and the new character also helps add further depth to Will Smith’s Genie once the two finally meet. The other new character that I would like to address has caused quite a controversy on the internet with concerns of whitewashing. Billy Magnussen’s Prince Anders is a much-needed source of comedy in the brief time that he is onscreen and ends up helping to illustrate how ridiculous Princess Jasmine’s suitors are. Trust me. I don’t think there will be a need for anyone to be mad at his portrayal of a ridiculous European prince. If anything, they’ll laugh and roll their eyes at his antics.

I would be remiss if I didn’t touch upon Gemma Jackson’s amazing production design on Aladdin. After her experience bringing the world of HBO’s Game of Thrones to life, Jackson is a natural choice to bring the world of Agrabah to life and what she has managed to do is nothing short of astounding. From the design of the open market bazaar to the inside of the palace, you truly feel that you are immersed in a world completely ripped out of fantasy. The usage of colors, in particular, on this film and its sets really help bring this sense of joy and positivity and life that helps solidify Agrabah as this port city that serves as the center of trade. The fact that the majority of the sets were practical rather than CGI-ed helps contribute to the realism of the world and gives plenty for the actors to work with while they are interacting in the environment onscreen. It is something that I personally feel has been missing in films over the past decade, but I love that more productions are starting to head back to more physical set pieces and production design rather than rendering everything on a computer. The difference is noticeable across the board. If Disney can hire Jackson for more films just so I can see what her mind will come up with next, I’ll be immensely happy.

While Jackson’s production design helped visually demonstrate what Agrabah looked like on the outside, Michael Wilkinson’s costume designs helped inform the audience and build on the story of Agrabah being a port city and a center of trade. They also helped illustrate to the audience the culture of Agrabah without explicitly telling them. The usage of colors in the designs helped illustrate to the audience a character’s wealth as well as their role within the realm of the story. The fusion of cultural styles within the clothing, in particular, helped to further convey the image that Agrabah is a major trading hub, with people from all different cultures coming and going and bringing their own cultures with them to be absorbed in different ways throughout the city. All analysis aside, Wilkinson’s costume designs are so colorful and gorgeous that one could almost just watch the film to take in all of the different details you’ve missed in the first viewing. 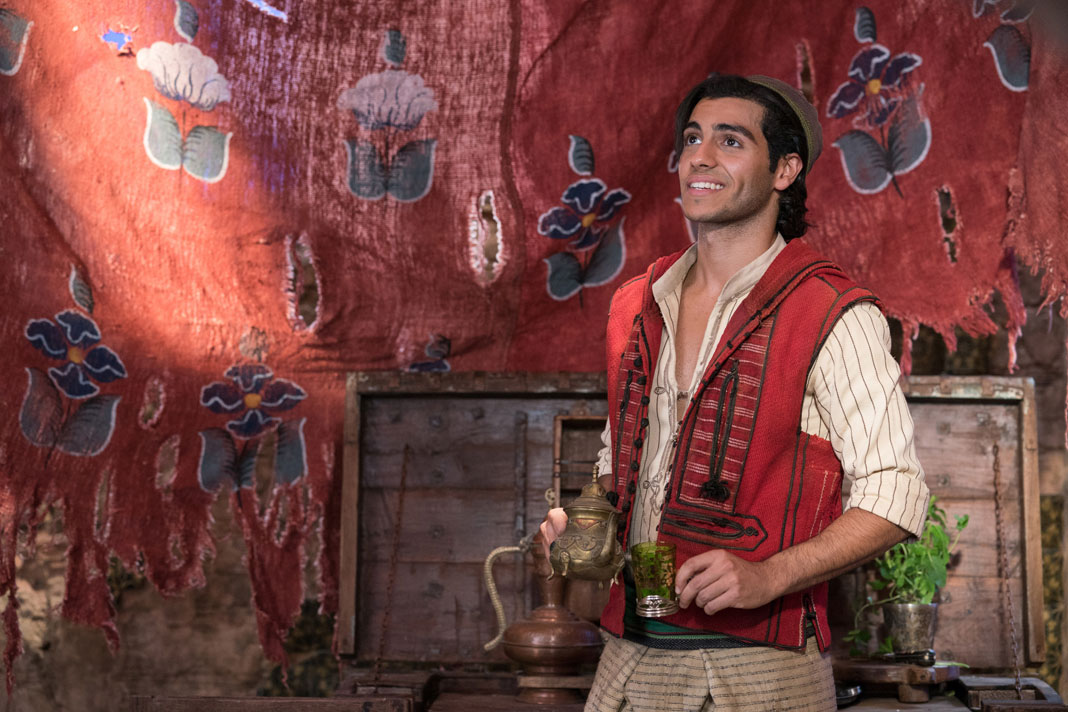 So, is there a hair out of place? Anything out of whack? I would say not anything that would make anyone outright claim that the film is no good. But I will say that the Genie and — spoilers — Jafar’s Genie-fied self still look off somehow. Whether it’s trying to combine the face of the actors with magically pumped-out Genie bods similar to the style featured in the original animation film, I’m not sure. All I know is that from a visual standpoint, it felt off and took me out of completely buying the world that director Guy Ritchie and co. were trying to show us.

Overall, Aladdin is arguably Disney’s best live-action adaptation to date. The cast all hold it together and everyone’s chemistry with one another radiates in each scene. The elements that have been added into the story for this film to provide further development for certain characters and the new music that’s been added do not take away from the magic of the original story. The only real issue that keeps me from giving this film a perfect score is how the CGI genies were crafted for the film. That particular element will keep the audience, in my opinion, from completely immersing themselves into the film. All in all, I think this adaptation does the original Aladdin justice if you allow yourself to step into the world that has been crafted for your enjoyment.

Disney’s Aladdin flies into theaters on May 24, 2019. You can check out all of the previous updates about the highly-anticipated movie by clicking here. 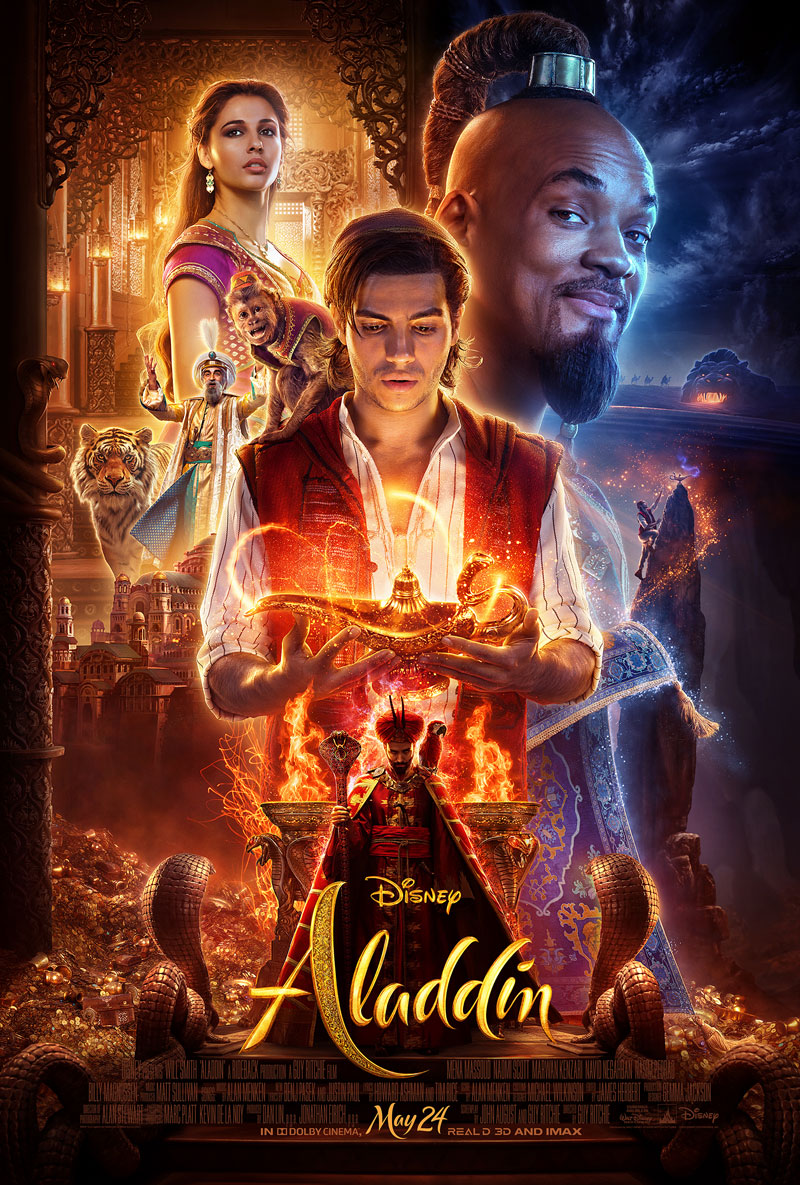 Previous
Vanity Fair Goes on the Set of Star Wars: The Rise of Skywalker

Next
Sarah Connor Returns in the Terminator: Dark Fate Poster
Click here to cancel reply.
Disclaimer: This post may contain affiliate links through which we earn a commission if you decide to make a purchase, at no cost to you. As an Amazon Associate, we earn from qualifying purchases.