Posted on Published: May 23, 2019 Categories Legion of Leia, Movies

How Will Smith Made Genie His Own in Disney’s Aladdin

During the press conference for the highly-anticipated live-action adaptation of Disney’s Aladdin, we got to learn more about how actor Will Smith approached the role of Genie, especially since Robin Williams’ performance left such a huge mark on Disney animated history. More importantly, we learned how composer Alan Menken’s music helped Smith start acclimating into the role and how it helped awaken that fun child within needed to make the Genie come to life!

One of the things that made the original Aladdin stand out was Robin Williams’ zany performance as the Genie. The character was fun, manic, and full of so many pop culture references that it could make anyone’s head spin. When Disney revealed that they would be giving Aladdin the live-action treatment, the world wondered who would even think about trying to step in the shoes that the late Robin Williams left to be filled. When it was revealed that actor Will Smith would be taking on the role, many doubted that he could successfully pull it off. The pressure was on for him to create something just as memorable as Williams. And, in the beginning, Smith couldn’t help but feel fearful regarding taking on the legendary role and doing it justice.

“For me, coming into this, first starting with fear, it definitely started with fear, what Robin Williams did with his character was, he just didn’t leave a lot of room to add to the genie,” Smith shared honestly. “So I started off fearful. But then when I got with the music, it just started waking up that fun childlike silly part of me.”

Will Smith further explained that it wasn’t until he got into the studio and started playing around with the song “Friend Like Me” that he was really able to feel something click in order to start building his version of Genie. Composer Alan Menken was supportive of Smith’s process, explaining that he viewed himself as an architect when it came to designing the music. He had designed a “Friend Like Me,” but now it was Smith’s turn to find himself inside of the song and make it his own. Will Smith then provided a breakdown of what his process was in getting the song to a point where he started to feel that Genie swagger. 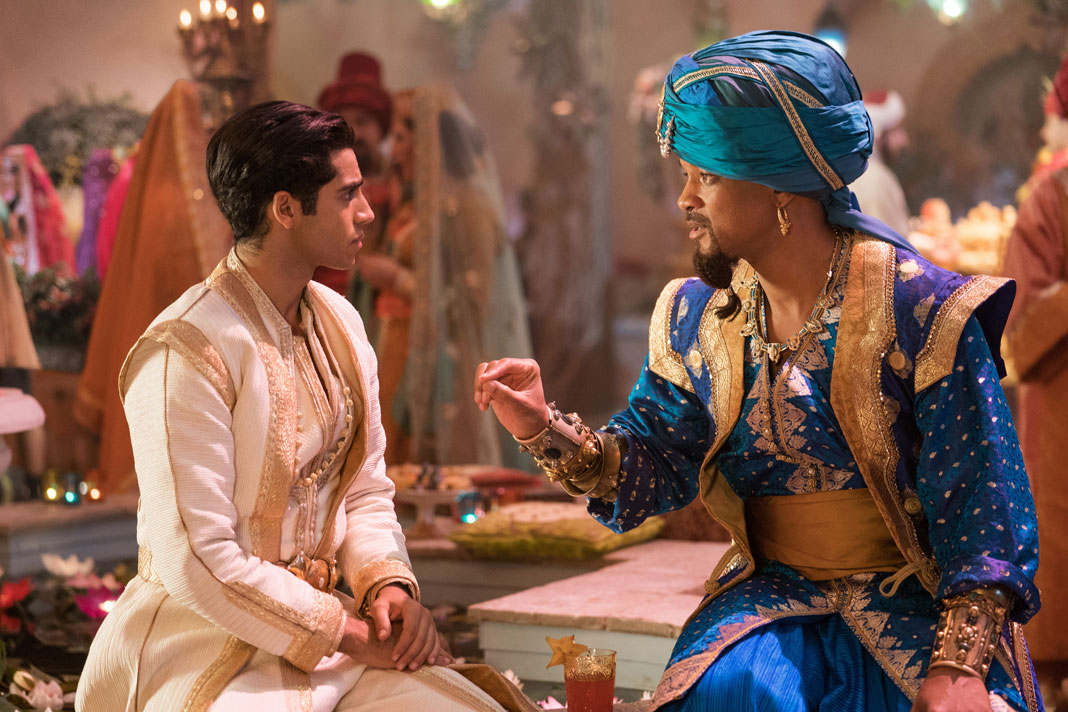 “I went into the studio the first day and I really wanted to play with it to see if I could add something to it. And literally 30 minutes in the studio, and starting to play with it and finding that in that 94, 96 BPM range, we were playing around in there thinking ultimately it was a little bit faster than that. But that 94, 96 BPM range is right old school hip hop,” Smith explained. “So, I grabbed the Honey Drippers’ Impeach The President, which is a really classic old school hip hop break beat. And I had them throw that break beat under there. And I messed with that and I messed with Eric [PH] Bien Rokems. And I was like oh my God. I’m home, I’m home. And then I started playing with the hip hop flavor and then the Genie was really born in my mind from the music. And I understood once I played with Friend Like Me.”

Knowing that the song “Friend Like Me” was what jumpstarted the process for Will Smith to start feeling the birth of his version of the Genie makes so much sense to me. “Friend Like Me” is arguably the song that most personifies the Genie and what illustrates to the audience who the Genie is and what he can provide for anyone who has the opportunity to release him from the lamp. He certainly nails the song in the movie and the work and care that he took to make the character his own as well as the songs his own definitely shines throughout the course of the movie.

Nasim Pedrad is Dalia, Naomi Scott is Jasmine and Navid Negahban is the Sultan in Disney’s live-action ALADDIN.

Mena Massoud is the charming scoundrel Aladdin in Disney’s ALADDIN, a live-action adaptaton of the studo’s animated classic.

Naomi Scott as Jasmine and Mena Massoud as Aladdin in Disney’s live-action adaptation of ALADDIN, directed by Guy Ritchie.

Aladdin (Mena Massoud) and Jasmine (Naomi Scott) flee from palace guards on the streets of Agrabah in ALADDIN, a live-action adaptation of Disney’s animated classic.

Mena Massoud as the street rat with a heart of gold, Aladdin, and Will Smith as the larger-than-life Genie in Disney’s ALADDIN, directed by Guy Ritchie.

Guy Ritchie and Mena Massoud on the set if Disney’s live-action ALADDIN.

Next
DC Universe Online Is on the Way for Nintendo Switch
Click here to cancel reply.
Disclaimer: This post may contain affiliate links through which we earn a commission if you decide to make a purchase, at no cost to you. As an Amazon Associate, we earn from qualifying purchases.