Posted on Published: May 21, 2019 Categories Legion of Leia, Movies

Aladdin: How the Song Speechless Ended Up Being the Most Timely

Home » Aladdin: How the Song Speechless Ended Up Being the Most Timely

We recently attended the press conference for the upcoming, highly-anticipated live-action remake of Disney’s Aladdin and learned everything about how the world of Aladdin was created, what went into the dance sequences of the film, and how the team behind the remake decided to expand upon the original animated film’s story while still holding onto the magic that made the original so impactful. Attending the press conference was Will Smith, Mena Massoud, Naomi Scott, Navid Negahban, Nasim Pedrad, director Guy Ritchie, composer Alan Menken, and production designer Gemma Jackson.

When it was first revealed that Disney would be giving Aladdin the live-action treatment, the first place my mind went to was whether or not Alan Menken would be back as the composer. This was an obvious duh! moment. However, I also wondered whether or not any additional songs would be created for this cinematic update. You see, one of the most prominent reasons why I loved the original animated film so much was because of the songs. They embodied the idea of fun, but also had this way of gripping onto your heart and never letting you go. Needless to say, it was an amazing surprise for me when I watched the live-action Aladdin and learned that Jasmine (played by the lovely Naomi Scott) had her own song titled “Speechless.”

During the press conference, moderator Dani Fernandez asked Naomi Scott what it had been like to discover the song that had been written for her to perform. Scott shared her feelings while also mentioning how important and timely the song feels for her in our world today: 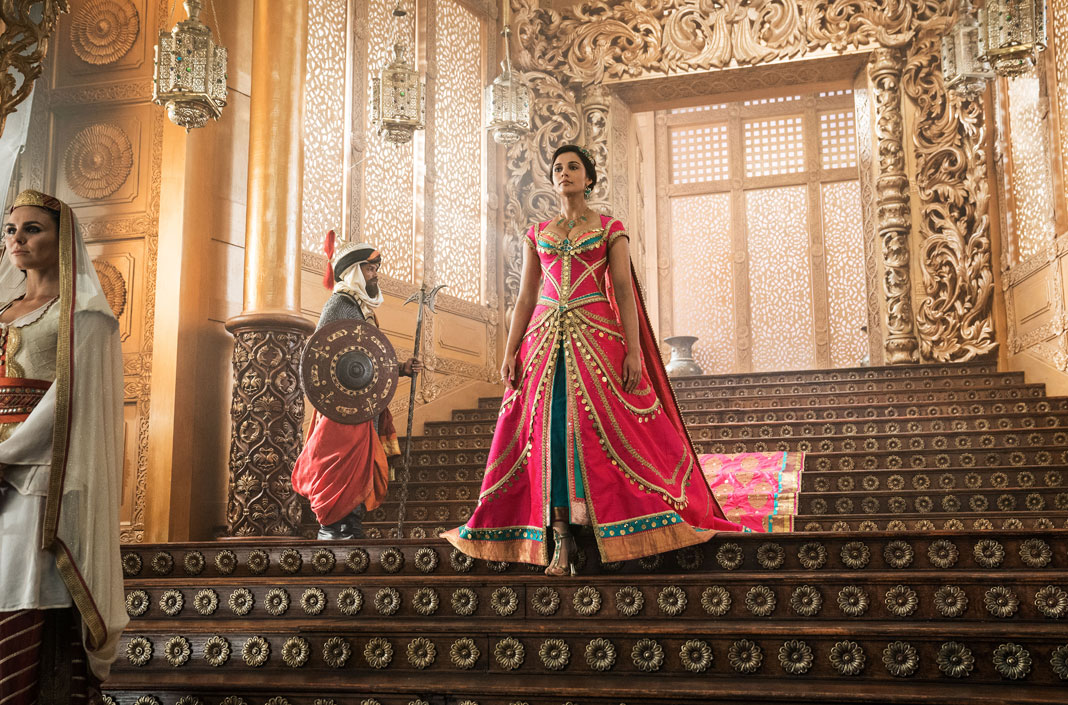 Naomi, with the help of composer Alan Menken, shared how the song “Speechless” had been written by Benj Pasek and Justin Paul, the team behind the songs featured in movies like La La Land, The Greatest Showman, and Dear Evan Hansen. The situation itself, of singing a song that had been written by the well-known duo, was surreal enough for her. However, when it came time to actually film the scene for the song, the emotions really took over.

“That day was very emotional,” Scott admitted. “But it was really emotional because I wanted it to feel raw. I wanted it to feel like you’re feeling what she’s going through in that moment. We did some of it live as well, which was a different type of challenge. Yeah. It’s out there. For me, it’s the world’s song. Whatever it will be, will be. And whatever people will take from it, they’ll take. I’m just obviously very blessed to be the person embodying it in the movie.”

The strength of the song was apparent to all of us who got to experience the full song at the press screening of Aladdin. The rawness of the moment as Jasmine is pushed into a corner is so relatable and I can’t think of anyone who has not found themselves pushed into a similar corner where we’re questioning whether or not we should speak out about something that is wrong. This song will truly be one of the defining moments in the upcoming film and I honestly can’t wait for everyone to experience it like I did.

Next
Skeet Ulrich and Laura Harrier Join Tom Hanks in Bios
Click here to cancel reply.
Disclaimer: This post may contain affiliate links through which we earn a commission if you decide to make a purchase, at no cost to you. As an Amazon Associate, we earn from qualifying purchases.
BigScoots Hosting: The last host you'll ever need! Click for details.