As frequently funny as it is frequently messy, the newest iteration of the Charlie’s Angels franchise has all the ingredients for success but never gets them together. A strong supporting cast, a solid vision for the film and top-tier department heads should, and occasionally do, create a zippy action comedy with just enough more on its mind than entertainment to give it life. But it all suffers from action scenes which are either excellent or a mess, flat characterization and some ultimately major miscast roles. The whole thing is ultimately a terrible disappointment.

An official unofficial sequel to both the television and previous film adaptations of Charlie’s Angels (it acknowledges all of the previous iterations happened without including anyone from them), the latest version picks up on the latest version of the team, including smart-ass streetwise Sabina (Kristen Stewart) and former MI-6 operative Jane (Ella Balinska). When a talented engineer (Naomi Scott) turns whistleblower on the potentially destructive device her tech startup is working on, the Angels jump into action on what should be a routine mission. Then assassins start showing up, their headquarters is bombed and they have to start asking who they can trust, including the Angels themselves.

It seems, on face value, that any failings here must fall at the feet of Elizabeth Banks, who does quadruple duty as writer, director, producer and co-star in one of the most action-heavy iterations of Bosley ever. And yet it’s not that simple; the decisions, on paper, all seem to be the right ones. Banks’ script is well-balanced on humor and tone with genuinely solid one-liners and a plot which is overcomplicated in the way all of these films are. The action sequences are stiff but mostly competent, falling somewhere below The Matrix-inspired tomfoolery of McG’s first Angels film but well above the out-of-control absurdity of his second. They mostly fall apart in their details; the big final confrontation with the villain is entirely composed of close-ups of faces and arms leaving it impossible to tell what is going on. None of this is great, but none of it is a deal breaker, especially with actors who can paper over the cracks.

Unfortunately, if there is a problem which Charlie’s Angels can’t get around, it’s the core casting. The main characters, as designed, are fine and in some ways ground breaking. Sabina is the kind of wise-cracking rule breaker who would be played by Mel Gibson back in the ’80s (or maybe pre-Captain America Chris Evans) and as a concept that’s great… but Stewart does not fit the mold cast for her. She spends most of the film trying to will a devil-may-care persona into existence, but it’s too far from her actual self to ever seem other than it is… an act. Every line feels like a performance, which makes it not only impossible to believe in but also upends suspension of disbelief. 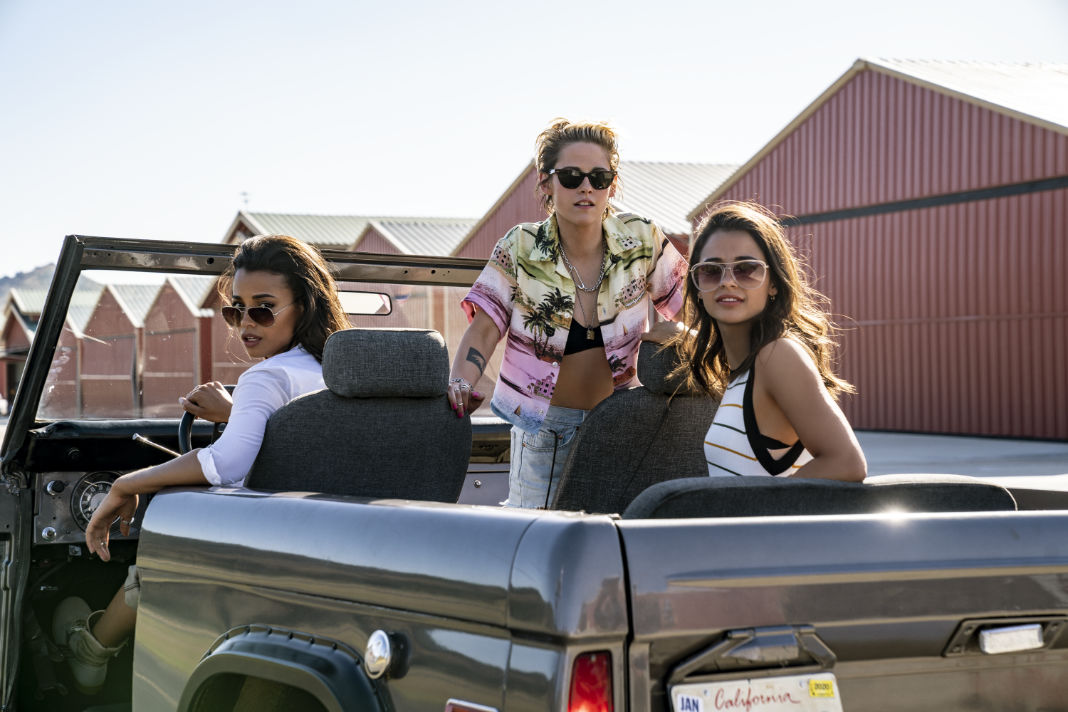 Fortunately the Angels are designed as a true ensemble rather than a star vehicle for any one member, which could cover up some of Stewart’s struggles. But Balinska is in the same boat; intended to be a world-weary and experienced MI-6 agent but never coming across other than what she is – a 22-year-old woman who has not yet had the life experience her character is supposed to be relating. Only Banks herself and Scott are right where they need to be. Scott in particular as a techie suddenly thrown into the world of guns and explosions and danger and trying to swim is the relatable middle of the trio the audience is given to travel through the film with and she pulls it off handily. She doesn’t always get the best lines — those are mostly reserved for Stewart and Banks — but she gives all the best reactions.

Those aren’t the only issues. The set pieces, as stated, are uneven: some work fine (usually if they have Stewart in the middle of them who turns out to be a natural at it) and some are slow and unwieldy. The editing is choppy and the cinematography may be the blandest of Bill Pope’s career. Banks may be giving everything her best, but no one else seems entirely up to that level and that dichotomy ultimately brings the whole thing crashing down.

Sony Pictures‘ Charlie’s Angels is now playing in theaters. You can view all our updates on the movie by clicking here.

AMC released today the opening minutes of the highly-anticipated The Walking Dead Season 10 Episode 9, as well as a sneak peek scene from the...
Read more