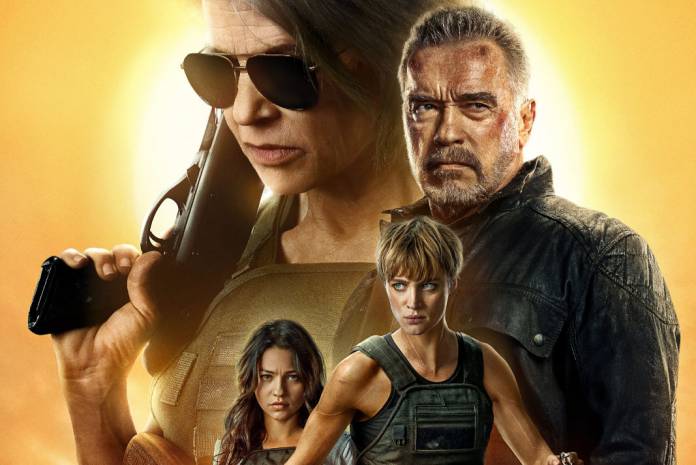 If the Terminator films have taught us anything, it’s that freezing an object makes it brittle and easily broken, and putting it back together again requires a lot of molten steel to come pouring out of the smelter you’ve just driven a tanker truck into. At least one of those observations is pertinent to Terminator: Dark Fate, the fourth attempt at a third Terminator film which audiences will actually accept. Which by my math makes Dark Fate the 81st Terminator film, or at least something with all the innovation, narrative and character growth of a 100-film franchise. Clever set pieces and some strong heroines taking the reins aren’t enough to paper over the cracks formed from years of weathering.

But if the Terminator franchise is a faded and cracked old statue, then Sarah Connor (Linda Hamilton) is its perfect avatar. Old, cantankerous and permanently affixed with a 1000-yard stare, Connor has become an old soldier with no purpose other than to continually, ceaselessly battle Terminators as they continue to pop out of time bubbles every few years. Something has changed, though, as the newest version (Gabriel Luna) is after not Connor but a young Mexican factory worker, Dani (Natalia Reyes). Fortunately Dani has her own protector — an augmented human soldier named Grace (Mackenzie Davis) who can go toe to toe with a Terminator at least for a little while — from a future Sarah has never heard of before. The more things change, however, the more they stay the same and soon Sarah and her new cohort find themselves on the run from an unstoppable killer robot, searching for some desperate way to kill it and the future it represents.

Starting with its opening moments — a replay from Terminator 2: Judgment Day of Linda Hamilton coming unglued about the realities of Judgment Day during a psyche eval — this Tim Miller (Deadpool) helmed iteration lays all its cards on the table. It is going back to the basics of the well-loved Terminator films and it is going to lean on them until they collapse and fall over. The plot points, the character beats, the Terminator-being-a-Terminator spots are all lovingly copies from well-loved predecessors, creating a new Mad Libs variant of the format. It’s so derivative of the first two films in the franchise, it’s hard to believe it took seven people to write it – or maybe it’s not. It wants to give everyone exactly what they want from a Terminator film but betrays with each frame how little it knows what that is and so settles for giving people what it thinks they want.

Where it does make deviations, Dark Fate actually does perk up interest. Unfortunately most of that is trapped within Mackenzie Davis as a future soldier once again sent back in time to protect someone they have a close personal relationship with. As a semi-robotic super soldier, Davis gets to bathe in everything Terminator producers have been aiming for in their hero since at least Terminator: Salvation, mixing the super strength and semi-invulnerability of the machines with human emotion and reaction. Davis makes it work, however, and whatever is lost in any sort of character growth is found in fascinating action beats the lumbering Arnold Schwarzenegger could never have managed. Reyes is bland and unformed as Dani, who has almost no definition as a person, but given some time the filmmakers might have gotten something out of their new status quo; unfortunately, swapping gender roles seems to be as far into ‘new and different’ as the current filmmakers are willing to go. 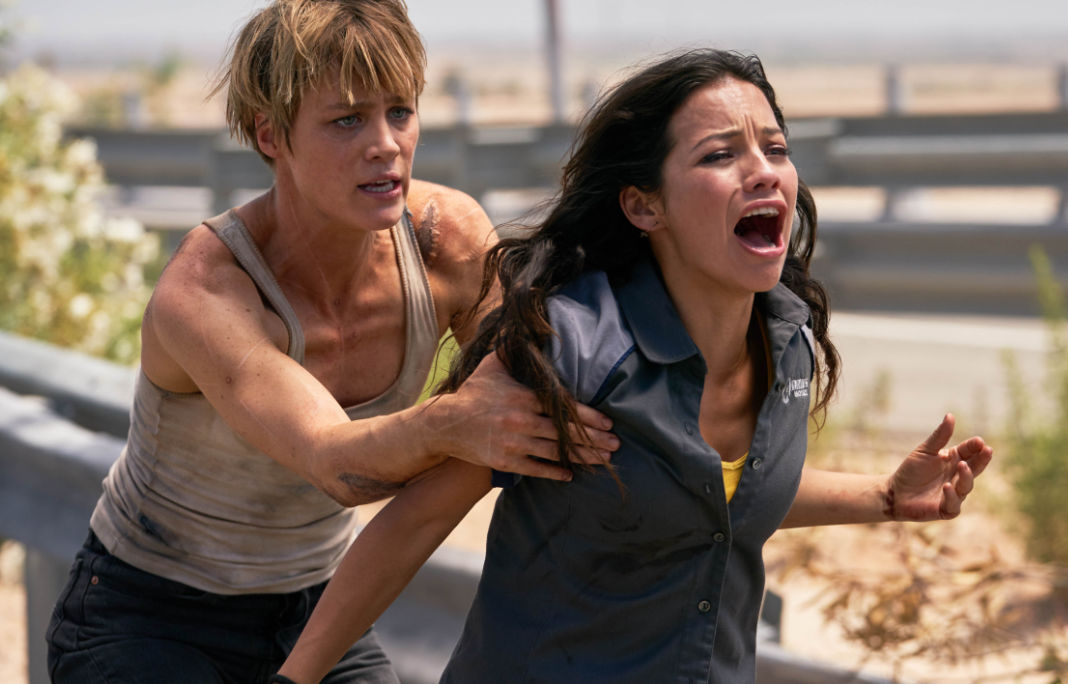 As much as it follows its forefather’s footsteps, Dark Fate has no interest in the extended character moments the James Cameron-helmed films included to add context to the action beats – it just wants more action. As well done as the set pieces are — and they are well done, particularly a free-fall fight aboard a plummeting airliner — they can’t hide how little the characters have been developed. Instead they have been shorted by being shoved into the predefined roles from previous films. That in and of itself might be survivable, except that the predefined roles from previous films are still in existence, adventuring alongside our new heroes. What is gained by putting the new versions of the Terminator and Sarah Connor alongside the originals beyond constantly reminding how ersatz the new versions are? Why would anyone connect to the ersatz version when the originals are still around?

For whatever qualities Terminator: Dark Fate does possess, it is strangled by its reliance on the past. Keeping legacy characters and story beats returning ossifies the story, refusing to let it grow. For a series which continually (and cynically) speaks of the need of breaking from the past and creating a new future, the new Terminator film remains unwilling to do so, preferring to continue an unending cycle of repetition. Maybe they’ll do better with the next one.

Previous articleKevin Hart Goes Trick or Treating to Tease New Jumanji Trailer
Next articleIt’s Game On in the New Jumanji: The Next Level Trailer!

Avatar 2 Production to Continue Next Week!

Producer Jon Landau has some good news for Avatar fans today. The Avatar 2 production is headed back to New Zealand next...
Read more
Movies

James Cameron and Jon Landau attended the unveiling of the Mercedes-Benz VISION AVTR, which is inspired by Avatar, at CES in Las Vegas on Monday...
Read more
Movies

Filming for the Avatar Sequels Ends in New Zealand for 2019

Producer Jon Landau has announced that the live-action filming for the Avatar sequels has finished in New Zealand for 2019. In a Facebook post, Landau...
Read more
Streaming

Disney+ announced today that you'll be able to stream Avatar when the streaming service launches in the U.S., Canada and The Netherlands on November 12,...
Read more
Movies