Mike Flanagan’s Doctor Sleep joins a rapidly rising tidal wave of Stephen King adaptations Hollywood has been releasing in recent years. While the direct sequel to both The Shining novel and movie opens and expands upon the lore within the story’s universe, it does take the film a while to pick up steam. I swear, no puns intended. However, once the film reaches that pivotal transitional point between the first and second acts, the action ramps up and we quickly learn how urgent it is to see the film to its end. If only so that we may be able to continue to watch the performances given by the actors onscreen and to watch ourselves fall hopelessly in love with newcomer Kyliegh Curran’s Abra and Rebecca Ferguson’s Rose the Hat.

Flanagan’s script gets the job done of conveying the story in essentially two acts, with several warranted and unwarranted references to Kubrick’s adaptation of The Shining thrown in to remind the audience that this is — indeed — the follow-up to that film. The first act of the film serves mostly as exposition, filling in the audience of everything they need to know before the heart and action of the film really start to take off. We are introduced to an all-grown-up Danny Torrance (Ewan McGregor), who uses alcohol and other problematic substances to cope with the trauma and after-effects of what happened at the Overlook Hotel decades prior and reconciling with his “shining” powers. After an incident shocks him awake from his rapid downward spiral, Danny picks up and tries to run away from his problems up to New Hampshire, where he hopes to try to start fresh. Little by little, we watch him slowly pull his life back together again until he comes face to face with the young teen, Abra Stone (Kyliegh Curran).

Abra, as the audience learns, possesses the “shining” just like Danny, but her powers have drawn the attention of a cult of psychic vampires known as the True Knot. Led by Rose the Hat (Rebecca Ferguson), the audience rapidly learns how these cultists feed off the “steam” or souls of the innocent in order to expand their lifeforce. The more powerful and healthy the “steam,” the longer these cultists can live. However, the methods in which they acquire the steam are deadly for those they capture and if they aren’t careful, they may be discovered by prying eyes. This is, unfortunately, how Abra gets involved and attracts the attention of Rose the Hat.

Once all the players have been revealed and the chess pieces have been arranged on the board, Doctor Sleep moves past the expositional phase and really ramps up. After this point, it also becomes abundantly clear which characters will become the most memorable of the film. Surprisingly, or maybe not depending on personal opinions, the most memorable character is not Danny Torrance. Despite Ewan McGregor’s best efforts, the memorability of Danny gets pushed to the wayside in part due to the performances given by newcomer Kyliegh Curran, Rebecca Ferguson, and Emily Alyn Lind who play Abra Stone, Rose the Hat, and Snakebite Andi, respectfully. Every time they were on screen, it was difficult not to be taken in by the characters they had come to embody and miss them when they weren’t present in a scene. This especially became the case when it came down to Abra and Rose the Hat’s moments face to face. Curran’s Abra is both innocent and diabolical as she spends the bulk of the film testing her limits while also dabbling in the darkness that her natural deviousness takes glee in. This juxtapositioned with Ferguson’s handling of Rose serves as a great comparison because we see a glimpse of what could happen to Abra should she choose that particular path of life. Either way, all of them gave badass performances. It’s just a bit of a shame that McGregor’s Danny took a minor backseat in the performance area alongside them.

In general, though, the bulk of the cast really shined overall, with each individual person making their own memorable moments onscreen. Zach McClarnon’s Crow Daddy is minutely terrifying but disarmingly charming. Cliff Curtis’s Billy Freeman provides the soothing balm and friendship that McGregor’s Danny so desperately needs. The kindness he injects into the role is enough to break anyone’s heart. Zackary Momoh and Jacob Tremblay are onscreen for a brief time but they both make use of their short time and manage to move the story forward to get the ball rolling. Alex Essoe’s Wendy Torrance is an eerily accurate interpretation of the performance Shelley Duvall gave in The Shining movie. For fans of the original film, this will literally make you double-take and question yourself. Continuing with moments that hark back to The Shining film, fans will also be able to recognize the character, Dick Halloran, who is now portrayed by Carl Lumbly. He captures the mannerisms and tone of the original given by Scatman Brothers and, without a doubt, is the biggest and probably the best reminder to the audience how this film connects to its predecessor. 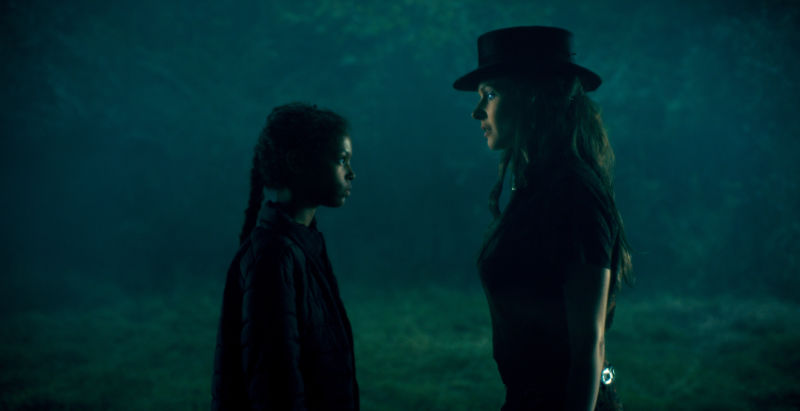 Thematically, there is so much to take in while watching Doctor Sleep that it is really hard to just focus on one particular theme. However, much like the good bulk of Stephen King’s work, there is plenty for audience members — both young and old — to take away from the film. The struggle of dealing with alcoholism, especially as a tool to try to numb the trauma, is a particularly poignant one. Even more so due to the public knowledge of King’s own struggles with substance abuse. How Flanagan and McGregor tackled the internal and external battles of alcoholism was very commendable and, personally, handled with great care. When it came time though to handle the impact of trauma on Danny, especially later on in the film, it definitely felt that from an emotional perspective, the delivery of how trauma can still linger decades later left something to be desired. However, there is one particular moment when Danny is counseling Abra with regards to her powers. While he’s spent his entire life running from who he is and what he can provide to the world if he allowed himself to, he is encouraging her not to make the same mistake he did. It’s the passing of the message of don’t hide from the world. Embrace yourself, even what makes you wrong in the eyes of others, in order to find peace. Perhaps, it is at that moment that the handling of Danny’s trauma does arrive at some form of reconciliation, even though the journey to get to that point felt a little hollow from a performance and writing perspective. Either way, there is a whole heck of a lot for the audience to chew on throughout the film and after the credits stop rolling.

In arguably the year of Stephen King adaptations, more specifically sequels, does Doctor Sleep pass muster? I’d say yes, but with reservations. While it definitely is not the mess that It Chapter Two was story-wise, there is a rather gradual, slow build-up to finally get to the main action of the story. For a good hour or so, we watch the action happen to characters rather than watch the story move forward as the characters themselves take action. For some audience members, this may not be interesting enough to motivate them to take the leap of faith to see the film. However, I highly encourage people to watch this if only for the second act and watching how the characters outside of Ewan McGregor’s Danny Torrance shine. If I were to be incredibly blunt, I’d say newcomer Kyliegh Curran and Rebecca Ferguson really carry the film on their shoulders as it is their performances that will linger in the audience’s minds after the film ends. And, for someone like me, that absolutely needs intriguing female characters to keep me going throughout my day to day life, my previous statement is literally my pitch to get you guys to stick it out through this lengthy film.

Doctor Sleep will awaken in theaters on November 8, 2019. You can check out all of the previous updates about the much-anticipated adaptation here.

The purpose of Star Wars Thrills is to put all the Star Wars news from the week of October 23, 2020 in one...
Read more
Movies

The Haunting of Bly Manor Episode Titles and Opening Credits!

With the series launching on Friday, October 9, Netflix has released both The Haunting of Bly Manor episode titles (except one) and...
Read more
Streaming

From Hill House to Bly Manor: Behind the Scenes Video from Netflix

Netflix has revealed nine character posters for the highly-anticipated The Haunting of Bly Manor, which arrives on the streaming service on October...
Read more
Streaming

The Haunting of Bly Manor Trailer Creeps In!

Netflix has revealed the official trailer for The Haunting of Bly Manor, launching on the streaming service on October 9. You can...
Read more
Movies

Mulan was a film that so many of us were waiting to see back when it was supposed to debut in March....
Read more

First Look at Javicia Leslie in the New Batwoman Suit

The CW has shared with us not one but two first looks at the new re-designed Batwoman suit for Ryan Wilder (new...
Read more

Empire Magazine has posted some new The Suicide Squad photos from its December 2020 issue, which goes on sale Thursday, October 29. You can...
Read more
Load more