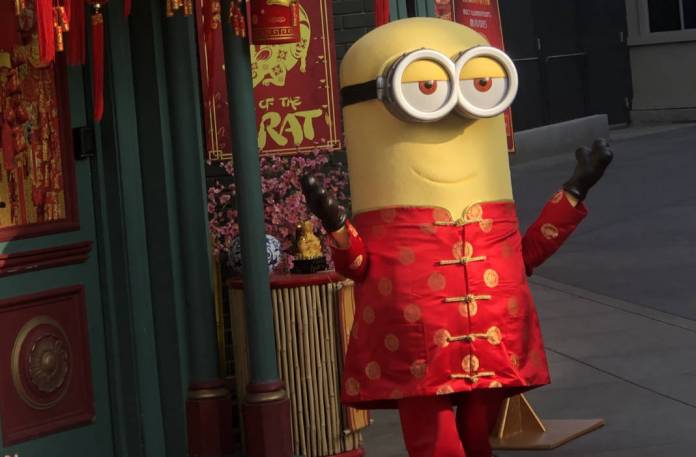 Universal Studios Hollywood is celebrating Lunar New Year from now until February 9. We recently got a chance to check out the seasonal offerings. We took some pictures to give you a look at what you’re going to see, including the absolute highlight, Mr. Ping at his noodle shop. 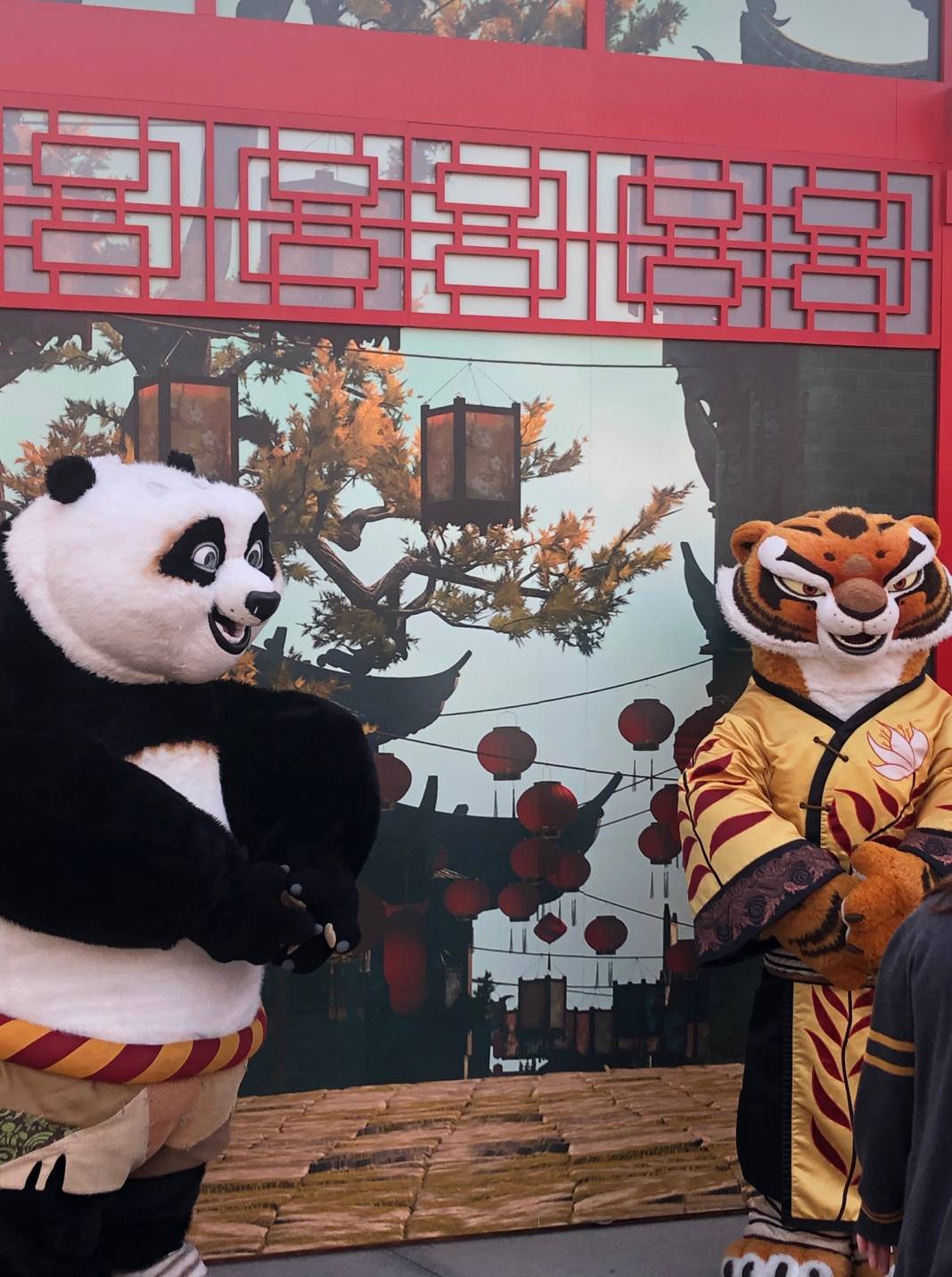 Here’s a list of what’s happening for Lunar New Year! 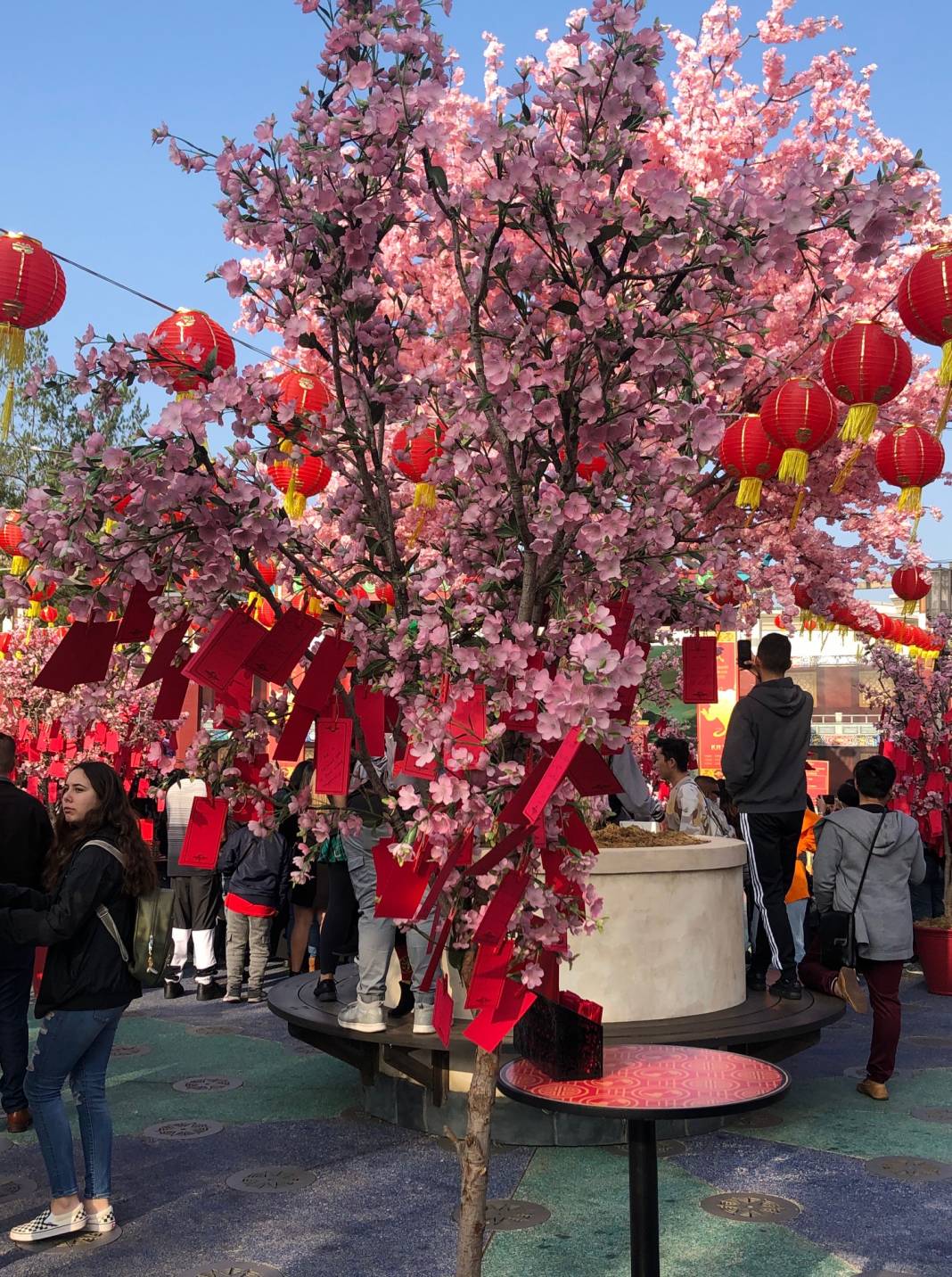 As soon as you walk near the Kung Fu Panda area of the park, you’ll see the square decked out in red and gold. In the middle, there are beautiful plum blossom wishing trees, and a box of red cards for you to write your wish on. You clip them to the trees. While we were there, we saw a dragon dance, complete with music, and later, a martial arts master teaching kids different fighting poses.

The art class, where you get to draw Po from Kung Fu Panda was adorable. Though we didn’t take a pic of the kids in the class, here’s where it took place (see below). A drawing master worked on an iPad and transferred it to a screen so everyone could see what he was doing. 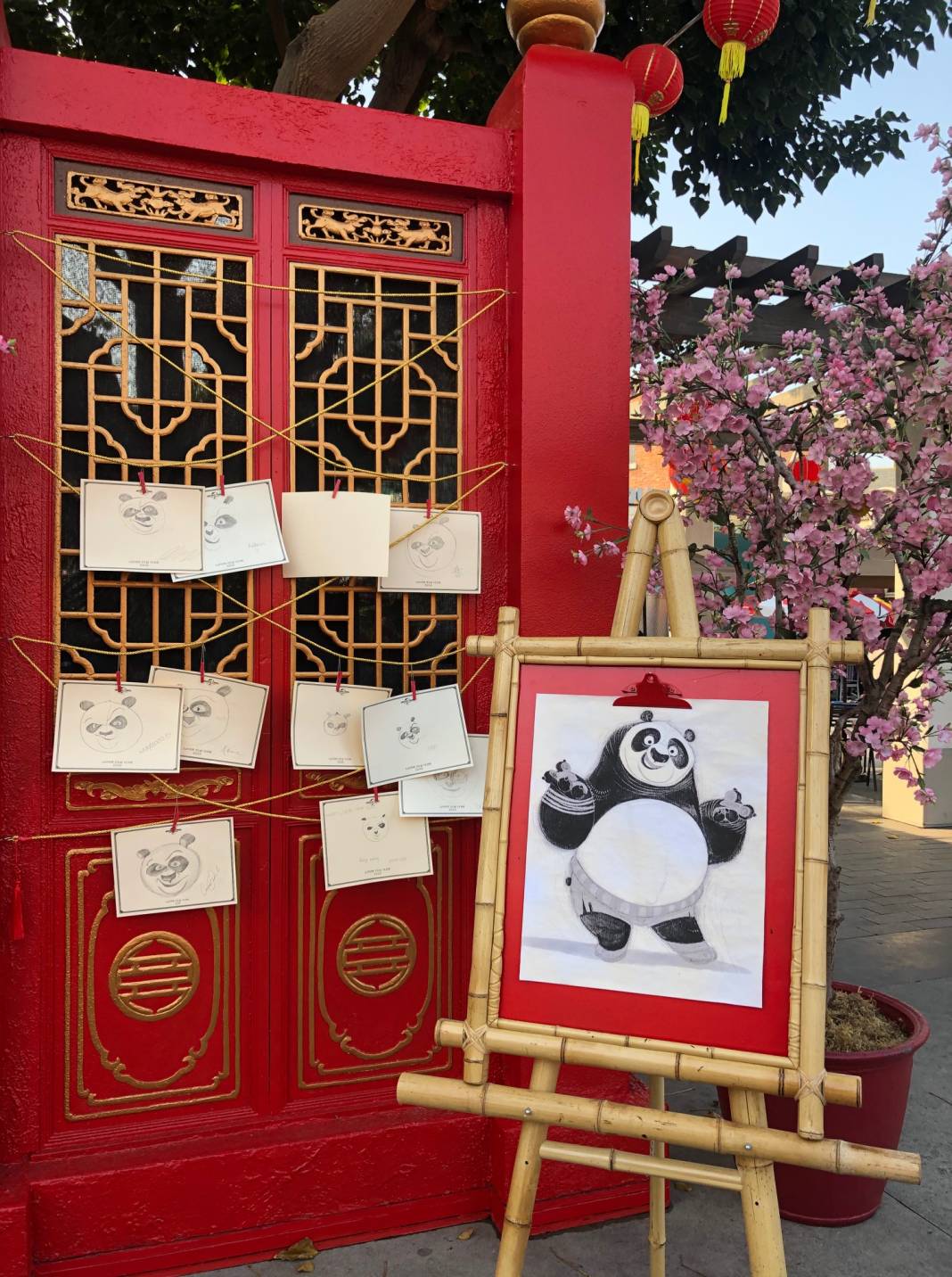 The square was gorgeous, and it was full of people. Inside the square was the highlight of the day – Mr. Ping! As we sat and ate our noodle bowls (there is even a vegetarian offering), we listened to Mr. Ping improv with all the guests who were waiting in line to see him. Someone needs to give this actor/puppeteer an Oscar. Note: All the lines were short, even though we were there on a weekend. There were plenty of people, but the costumed actors managed to get everyone through the lines very quickly. 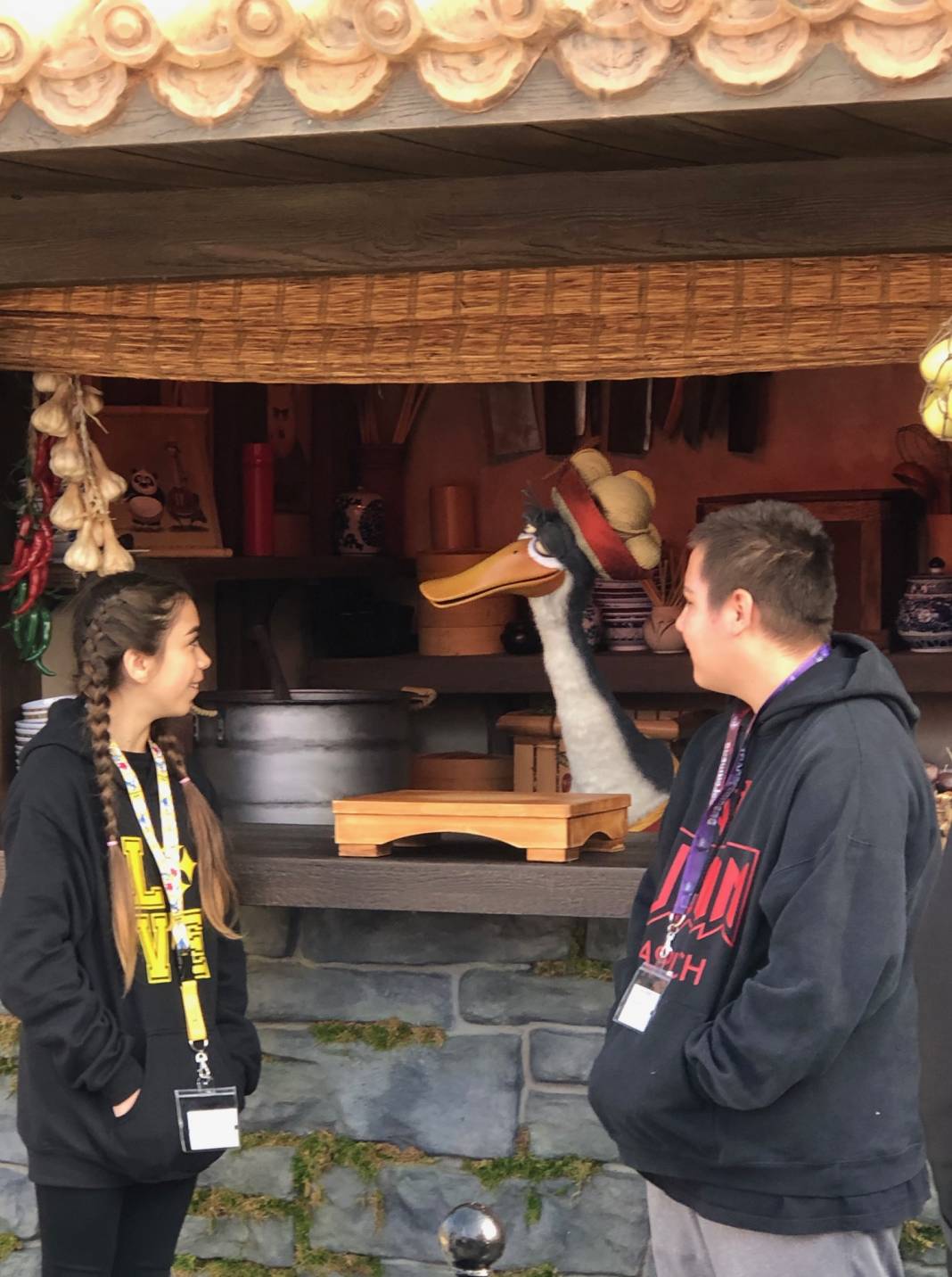 You can get a glimpse of the menu below. The Secret Ingredient Noodle Soup is the vegetarian one, and it’s very good! 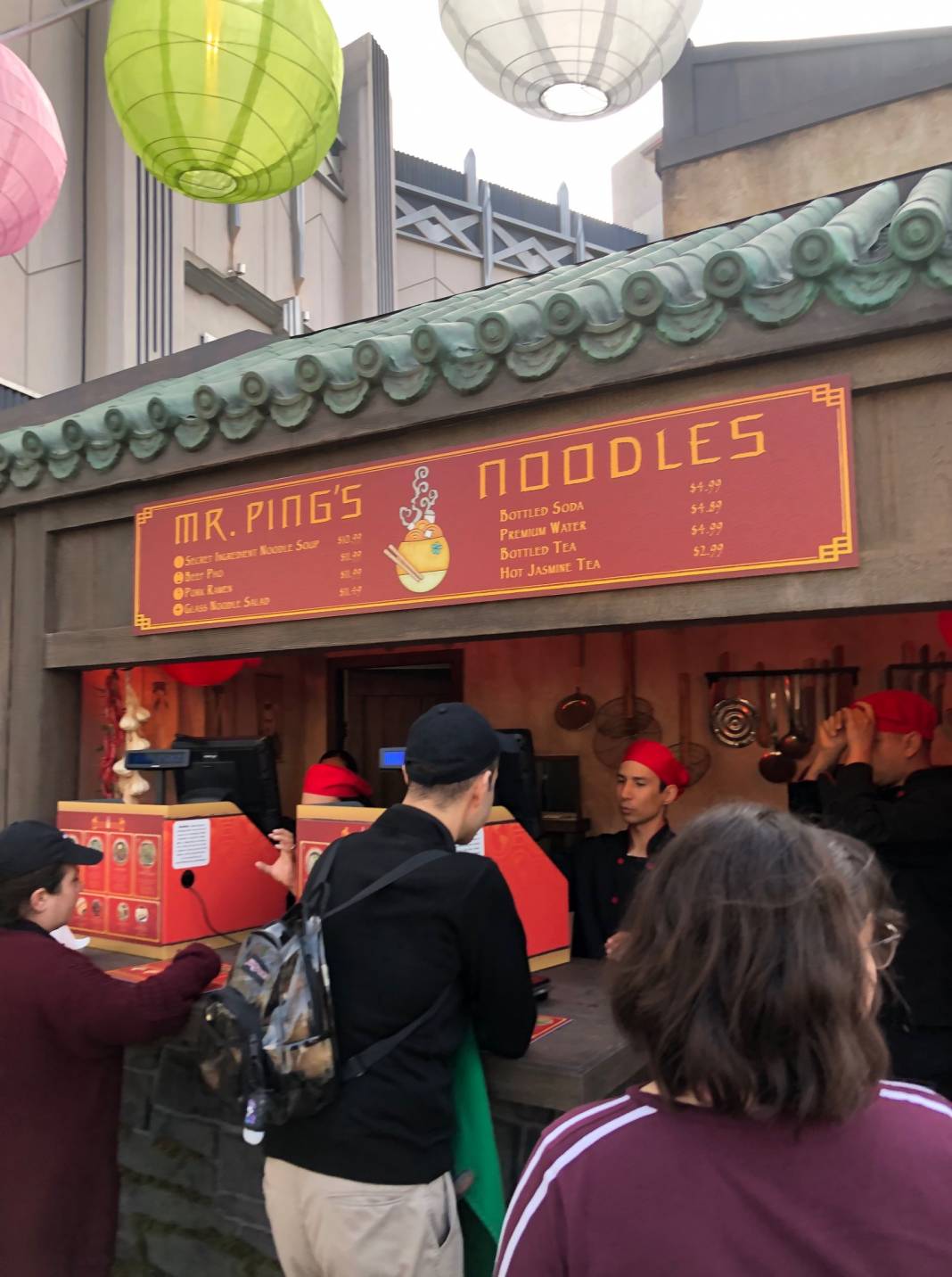 There were also costumed characters to get pictures with, including a Minion, Hello Kitty and a Mandarin-speaking Megatron, which had the crowd wooing with delight. 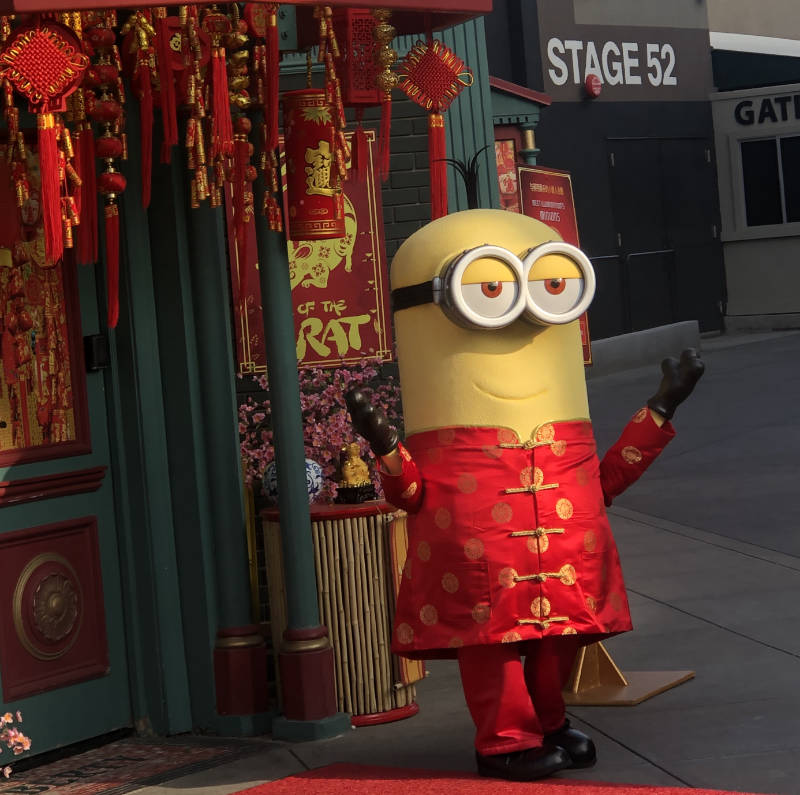 Again, the line was super short, and people got pictures within five minutes at the most!

Megatron wasn’t there for long on Sunday, but he was definitely a huge draw! 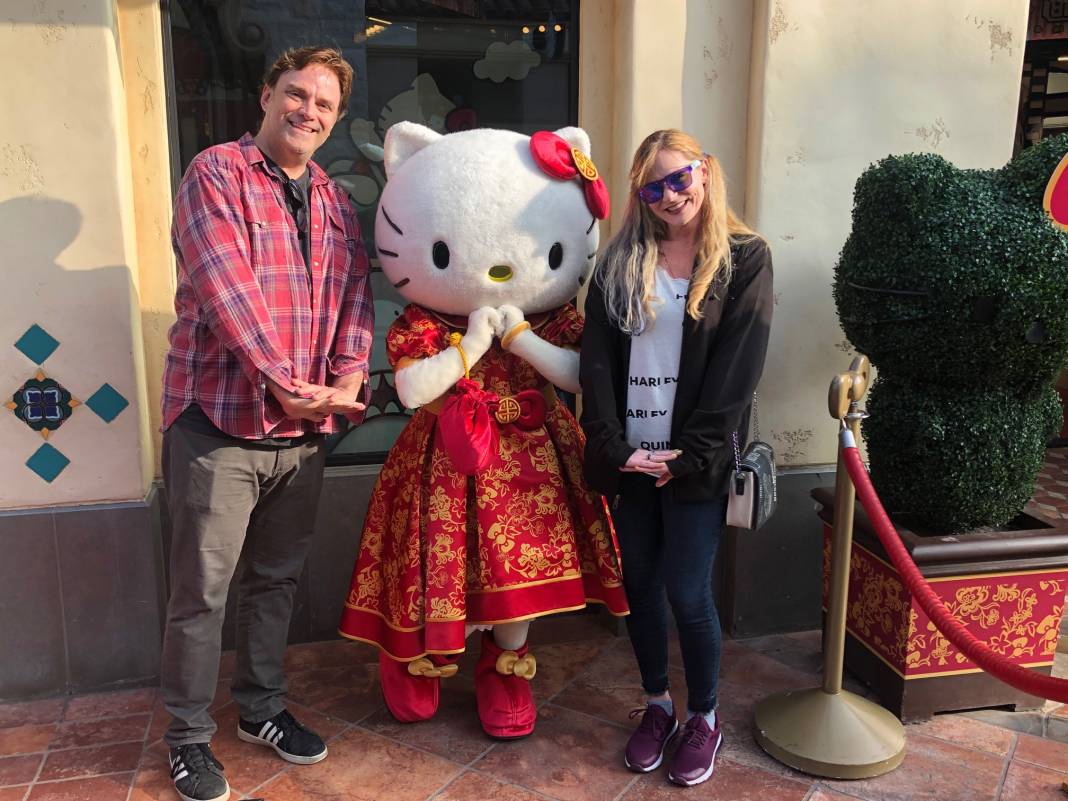 Yours truly and my better half (and frequent Legion of Leia podcast guest) Jeffrey Henderson hanging with Hello Kitty. She hugged and kissed every guest before and after each photo. You can find her hanging outside the Hello Kitty store. In fact, all the stores had Lunar New Year offerings, as you can see below. In the square, there was a stand where you could get plush Megatrons, Minions and Hello Kitty dolls, flower crowns and a number of other items. 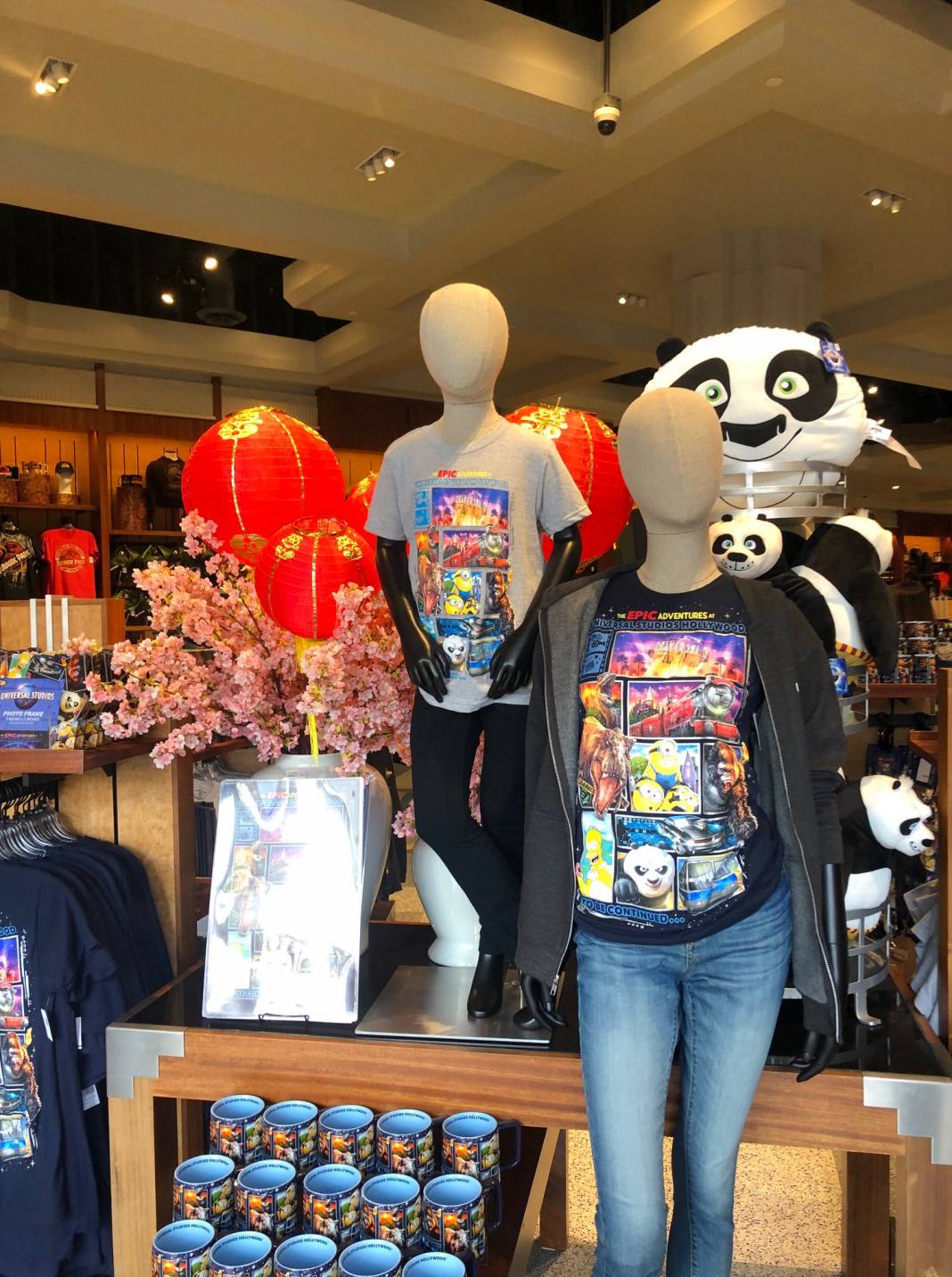 Below you can see the entrance to the square where all the entertainment takes place. 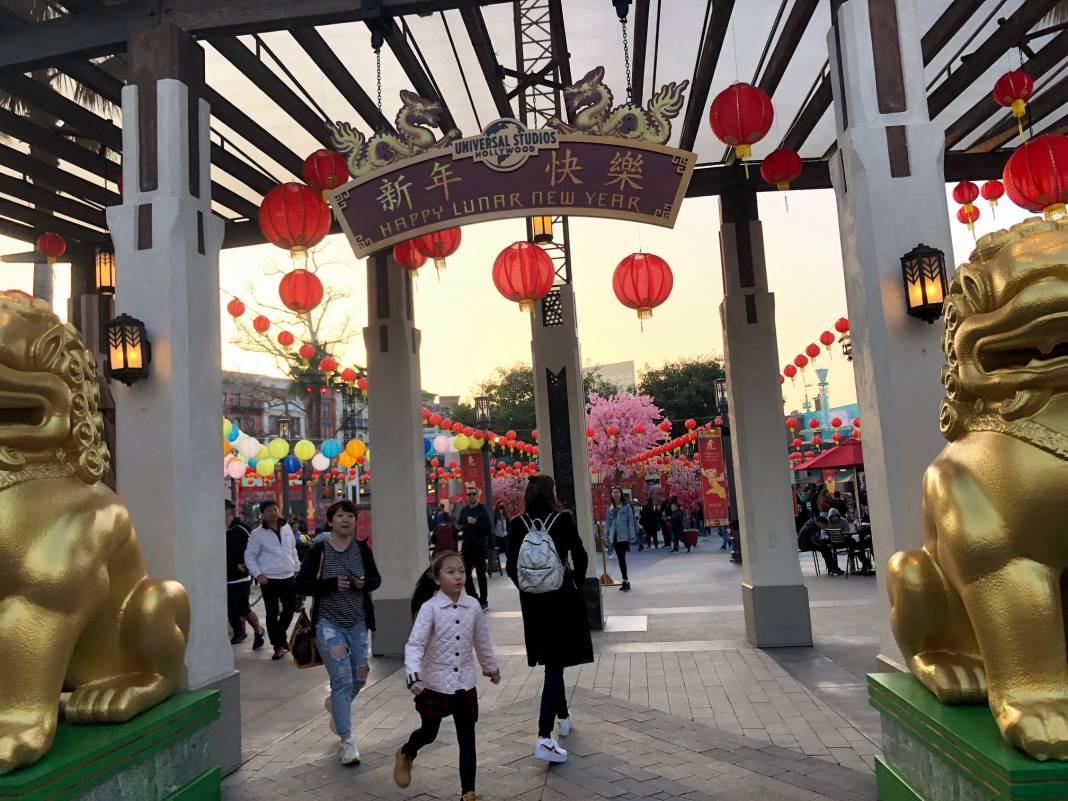 Here is a list of other options. As you saw in the first pic, Po and Tigress from Kung Fu Panda were wandering around the recreation of Po’s village, as well as posing for pictures in front of a backdrop. 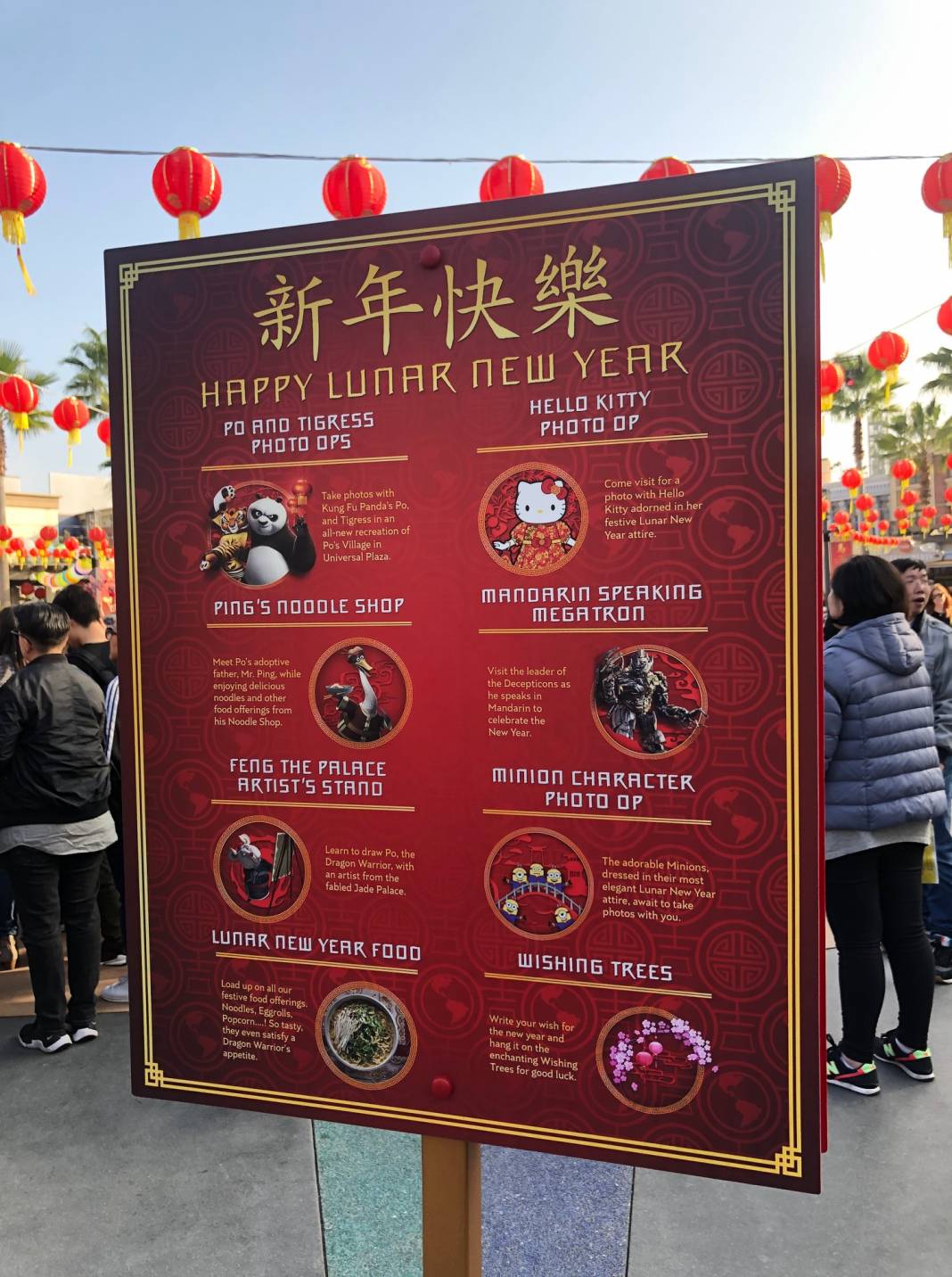 It was a lovely experience, and we definitely recommend waiting to chat with Mr. Ping. The food at Mr. Ping’s Noodles was excellent, so don’t fill up before you go. Make sure you tweet us @VitalThrillscom to show us what you wished for. Mine was the usual for the new year, but Jeff’s was a picture of Baby Yoda… I mean, The Child, with a wish for chickee nuggies. If you see that one on the tree in the center, make sure you let us know!

Even though the movie is not scheduled to open in theaters until Friday, July 2, 2021, Universal Pictures has brought online a new...
Read more
Streaming

Netflix, Hasbro, and Rooster Teeth have revealed the new trailer for Transformers: War for Cybertron Trilogy - Siege, which debuts on the...
Read more
Games

Hasbro and Outright Games have announced Transformers: Battlegrounds (pre-order at Amazon), an all new Transformers video game for kids and fans of...
Read more
Movies

Even though the majority of Hollywood is on hold, there's still a lot happening in the worlds of Hasbro's properties. Just this...
Read more
Movies

Minions: The Rise of Gru Pushed Back Due to Illumination Closing

Universal Pictures is pushing back the release date for Illumination's Minions: The Rise of Gru, which was previously set for a Friday, July 3,...
Read more
Streaming

Netflix and Hasbro, in partnership with Rooster Teeth, today released the first teaser trailer for Chapter One of the highly-anticipated Transformers: War for Cybertron...
Read more
Theme Parks

The Minions Are Back in The Rise of Gru Trailer

Following the Super Bowl spot, Universal Pictures has now also released the first Minions: The Rise of Gru trailer, which you can watch using the player...
Read more
Movies

Get Ready with the Minions: The Rise of Gru Super Bowl Spot

Universal Pictures has brought online the Minions: The Rise of Gru Super Bowl spot, giving you a first look at the July 3, 2020 release....
Read more

BBC Studios and ITV have announced the BritBox November 2020 titles, which include everything from new BritBox Originals to classic British fare....
Read more

CBS All Access today announced that Allison Tolman and Nick Frost have been cast in the second season of the service's original...
Read more

In Treatment Returning for a Fourth Season with Star Uzo Aduba

The Emmy-winning drama series In Treatment is returning for a fourth season on HBO with Uzo Aduba set to star. Production is...
Read more

Showtime has announced the movies and TV shows coming to the service in November. The Showtime November 2020 lineup includes the new...
Read more

Lopez and Hammer Say I Do to Shotgun Wedding

Jennifer Lopez and Armie Hammer will blast their way down the aisle for Lionsgate’s action-comedy Shotgun Wedding. The announcement was made today...
Read more