Locke & Key premiered on Netflix on February 7, and viewers learned all about the mysterious keys that have followed the Locke family and their friends. The series is based on the hit comics by Joe Hill and Gabriel Rodriguez. We recently got to chat with actress Hallea Jones, who plays Eden Hawkins in the series.

Jones told us about playing the mean girl, why Eden acts the way she does, shooting that cafeteria scene and the big twist at the end. There are some spoilers here for the show, so make sure you watch it first!

Vital Thrills: One of the things that’s great about Eden is that she starts off as the mean girl, but there is so much more to her. Can you talk a bit about who she is?

Hallea Jones: Yeah Eden kinda comes off – I’ve always said she was like a Regina George, top of the town and the boarding school and whatnot, but as I began playing her and diving into her character – we didn’t get all 10 scripts at once, so I was kind of figuring out Eden as I went through, but I kind of discovered that there are a lot of insecurities about Eden that make her act out.

We haven’t been fully confirmed for a second season yet, but I’m really interested to see how Eden develops through the second season just because of what happens at the end. [laughs] There are a lot of things that can happen for Eden. Now it’s hard to bring humility to her, the down-to-earth part that I feel like she does possess, but she shies away from, because she might think that or feel that to be weakness in some way. 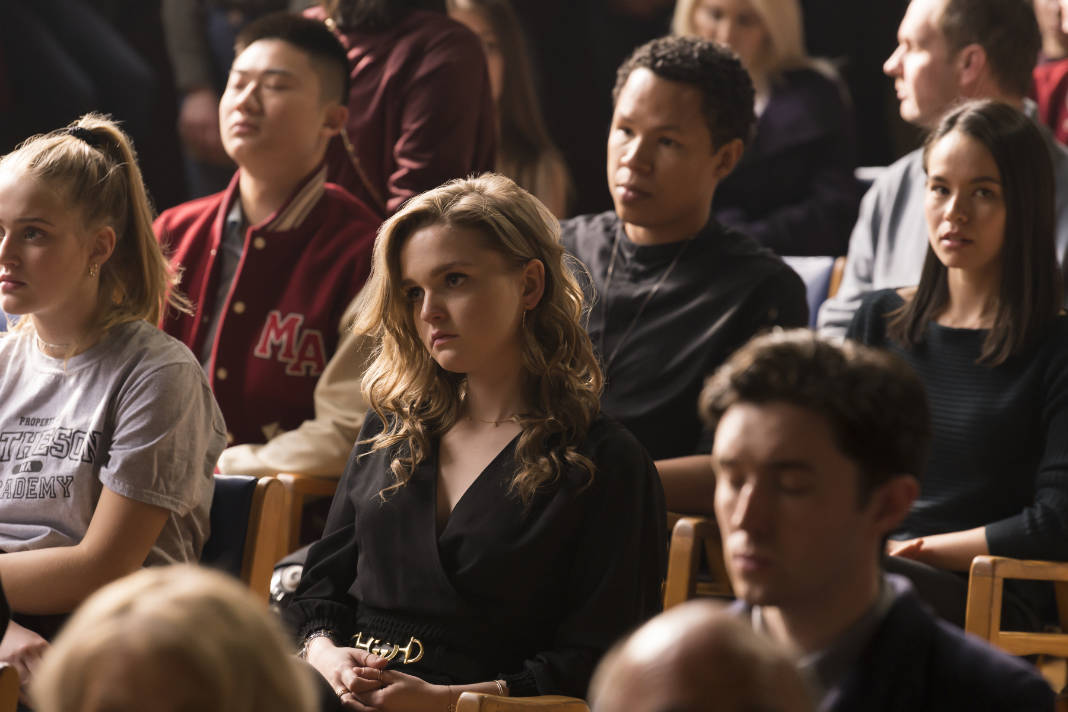 So I’m thinking that Eden has been through some stuff in her life, so she builds up these walls of intimidation to kind of protect herself in certain ways. I’ve always referred to Eden as Kim Topher and Jordan [Gates] from the book, and Kim has a lot of insecurities, so she expresses herself through being mean, to cover up her insecurities.

VT: Did you have a backstory for yourself about Eden’s friendship with Jackie (Genevieve Kang)?

Hallea Jones: I tried to develop a backstory, but it was difficult because we’re not working right alongside of the writers. They could completely switch it up on us. I had a backstory, but then I was like, I can’t dedicate fully to this, because it could change. But the idea behind Jackie and Eden is that we’ve grown up together, and Jackie has seen my vulnerable and kind side, and has always stuck by her. That’s kind of the idea behind Jackie and Eden, is that it’s a longtime friendship. I don’t know if they would be friends when they graduate… I think it’s a time thing with Eden and Jackie.

VT: You have a lot of physical comedy and movement in the cafeteria scene. Can you tell us about shooting that?

Hallea Jones: Oh, it was so much fun. It was incredible. We did two movement coachings… we worked together and created this piece. I have a video of the initial scene choreography on my Instagram page. Looking at it on the show, because of the sound design and the editing, it makes it sound so much worse!

A special little treat for all the Lockeheads out there who have seen episode 5! 🗝 I worked with the FANTASTIC Roberto Campanella and Lindsay Somers (@intimacycoordinatorscanada) who made this whole experience so comfortable & fun! We did two movement coachings to prepare for the scene and put our wild minds together to create the craziness of Eden being puppeteered! Mark Tonderai was the director of episode 5&6 and made the whole filming experience so comfortable & incredible. His vision & kindness are out of this world – I am so grateful for this experience and maybe we’ll see some more craziness from Eden if (when?!?!!!) we are confirmed for season two!! *fingers crossed!* 🤞🏻 @lockeandkeynetflix @netflix

The sound of me hitting the table is way louder than when it actually happened. So it sounds like I’m breaking bones! [laughs] It was so much fun! I had padding on, of course. I bruise like a peach, so I really needed that. I had some bruises after that, but it was one of the most fun days on set. I loved that day.

VT: You got to go into the cave, which was really cool. I know we have a bit of a spoiler at the end, but can you talk about shooting that scene?

Hallea Jones: The outside of the caves was shot in Lunenberg, Nova Scotia, which was beautiful, and the inside of the caves was shot here in Toronto. It was the coolest thing. I have to give a shout out ot the crew who created that. The detail and the hard work that went into the creating of that set is just incredible. It’s so realistic-looking. I’ve been watching it with my friends, and they’ve been like, wait, so is that a set or is that real. It’s really cool to have that insight. It makes you think, well, what other shows that I’ve been watching look super cool, but it’s a green screen or a set, which is movie magic, right?

Shooting that last scene was so cool. It was long days that I got to spend with the cast and crew, and it was a lot! [laughs] It was really really cool. I really enjoyed it. 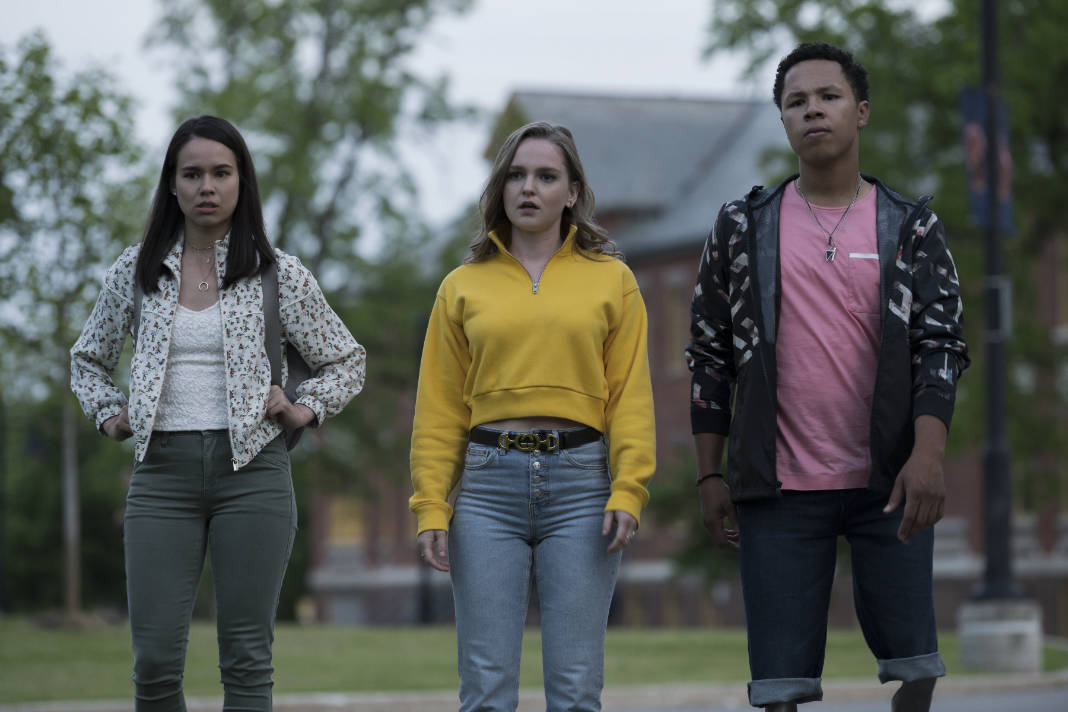 VT: Considering everything that happens at the end, what would you like to see in a Season 2?

Hallea Jones: You know what I really loved? I loved the Shadow Crown. I thought that was so cool. I was just so – I can’t even think of a better word than flabbergasted! When I was watching that scene when the Billie Eilish song comes on, and Dodge (Laysla De Oliveira) puts the crown on, I was like, oh, this is so cool! I would love to see more CGI like that stuff.

But on the whole, I would like to see Eden getting more involved with the family. Developing those relationships and seeing – I would really like to see Eden go really nice. To have a full 180 from the first season. Just developing the relationships would be a really exciting thing to see the tactic that Eden uses to get what she wants in Season 2. I would love to see more of the magic.

VT: This is a huge role for you. How has your life changed since this came out?

Hallea Jones: [laughs] I got a verification on my Instagram yesterday! I woke up from a nap, and I was like, what?! This why is so cool! It sounds so stupid, because it’s just a bunch of little blue pixels, but it’s something that, as a young actor, someone who is new in the industry, social media does matter. Social media is definitely the number one thing that has changed. It kind of scares me in certain ways. I don’t want it to affect my life in a negative way, which I think it can if you let it. Even just talking to people, and then they follow me on social, there is a different connotation behind having a blue checkmark, or having as many followers as I have come to find. I don’t want that to negatively affect my relationships… 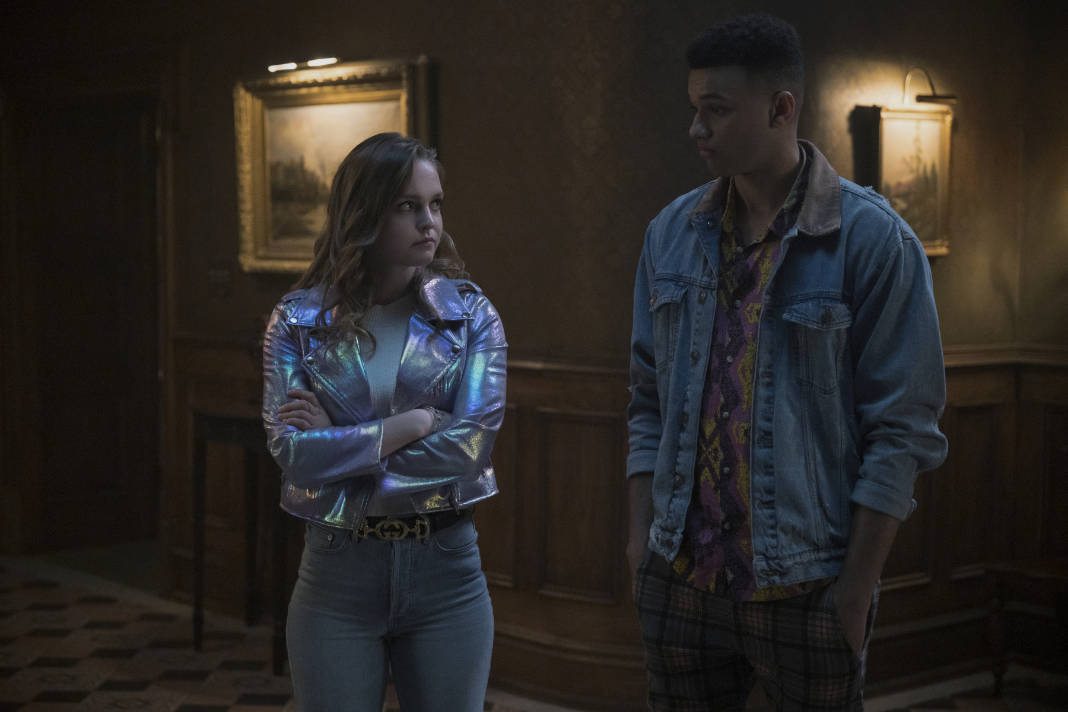 I’ve just been so focused on being me, and surrounding myself with people who don’t really get phased by Eden. The biggest thing I’m worried about because I play such mean characters, is people thinking I’m that way. But one of my friends, yesterday, said, “I’m really loving the series, and I actually don’t see you. I see Eden.” I’m like, “Good! I’m really glad!” [laughs] It’s a life-changing role. I’ve never had anything this big. It’s truly a breakout role, opening up a lot of opportunities for me in so many aspects of my life. It’s been a really really cool experience.

From Carlton Cuse (Lost, Bates Motel) and Meredith Averill (The Haunting of Hill House), the series is a coming-of-age mystery about love, loss, and the unshakable bonds that define family.

Locke & Key is streaming now on Netflix. Have you watched the series? What did you think of Hallea Jones’ Eden and what do you think will happen with her if they get a second season? Let us know what you think!

Next
The CW Spring 2020 Premiere Dates Announced
Click here to cancel reply.
Disclaimer: This post may contain affiliate links through which we earn a commission if you decide to make a purchase, at no cost to you. As an Amazon Associate, we earn from qualifying purchases.
Try Paramount+ for free for 1 month! Click here for details.