Learn All About Childhood Friendships in Disney and Pixar’s Luca

Vital Thrills recently attended the early press day for Disney and Pixar’s Luca and we got a chance to talk to Academy Award-nominated director Enrico Casarosa (La Luna) and producer by Andrea Warren (Lava, Cars 3).

We’ve also got a friendship featurette, so don’t miss it below the interview! Disney and Pixar’s Luca will hit the Disney+ streaming service without Premier Access on June 18, 2021.

Set in a beautiful seaside town on the Italian Riviera, Pixar’s Luca is a coming-of-age story about one young boy experiencing an unforgettable summer filled with gelato, pasta and endless scooter rides.

Luca (Jacob Tremblay) shares these adventures with his newfound best friend Alberto (Jack Dylan Grazer), but all the fun is threatened by a deeply-held secret: he is a sea monster from another world just below the water’s surface.

Luca is all about the kind of friendships you can only have when you’re a child, and how they influence you to try new things and expand your horizons. As you can see in the featurette from Disney and Pixar’s Luna, Casarosa was very inspired by his real-life best friend Alberto.

He spoke about the friendship, saying, “I’ve been in touch with my best friend Alberto through the years, sometimes more than other times. I’ve been a little bit in between not wanting to tell him too much, but then having a lot of conversations about our friendship, which have helped the movie immensely.

“It felt like it was really about being willing to scrape a knee and being out there and taking some chances was his thing. And he was passionate. He was very much about embracing his fears.

“I always tell the story of when he bought a python — an actual snake — and he brought it into school. And that was his pet. And then he told me, when we were talking about it just a few years back, a couple years back, that he was terrified of that thing and that his little sister was feeding it,” he laughed. “He didn’t wanna feed it.”

Casarosa even joked about Alberto’s reaction to having a character named after him in the film. “Hey, you better make me look good in this movie,” Alberto told him. Casaros said, “But I’m trying to surprise him a little bit, you know?”

He also spoke about his thoughts about bringing his hometown to the big screen as an immigrant. “Oh, it’s such a pleasure,” he said. “I was talking a little bit about the details we’re putting in the background, and the pleasure of even talking about our dialect, we have a Ligurian dialect, it is very specific.

“Of course, all of the regions of Italy have a dialect, most of the world does. But we’re putting [a] little Genoa in. We wanted as much focaccia in this movie as possible. Focaccia is our bread.

“We are one of the few people that dunk it in their coffee, by the way. I could not fit in a dunk in the coffee in the movie, but I wanted to. I have so many little details that I’m, like, ‘Ooh, this one is very specific and people in Liguria would probably understand.’

“It’s a wonderful city, it’s a wonderful area of the world. So, I feel, you know, it really goes so well with our ethos of authenticity and specificity, to embrace these wonderful details.

“We want to take people in an authentic way to a place. So, I’ve a lot of pride as an immigrant, as you were asking, I think the more you’re far away from you roots, the more you appreciate them, and honestly making films has really become my way to embrace my roots as much as possible. You know, my daughter is 13 and I speak to her in Italian every day. So, it’s such a fun way to share the language with her.”

In terms of the time period the film is set in, we’re looking at the feel of Italy in the 1950s and 1960s. Casarosa laughed, saying that the timing of the film was better than when he grew up there because, “…of the tube socks, the ’80s seemed less interesting to me…

“…It really was an aesthetic, beauty, and a musical choice, and then a timelessness. It goes to that same, answer I was mentioning before, to me, when you go to an older era, it can feel a little more timeless, and a little less specific too, just because it’s a little bit more removed for us. I find, maybe, the ’80s is a little less interesting.”

Though there has been online speculation about whether not not there will be a romance between Giulia (Emma Berman) and Alberto or Luca and Alberto, Casarosa said that this was set a little before that part of the kids’ lives.

“I was really keen to talk about a friendship before girlfriends and boyfriends comes in to complicate things. Interestingly, even narratively, once Giulia comes into the picture and we looked at the structure of it, sometimes the story would pull you toward some puppy love or romance, and to be completely honest, I wanted to talk about friendships. So, we really said, ‘Well, this is that moment before those things come in to complicate the picture.’

“Alberto was Luca’s shove off the cliff,” he laughed. “You know? There is that kind of friendship that is gonna push you into trouble, push you into change, push you into finding yourself. I also felt like it’s that moment in life when you’re leaving the bubble of your family. They’re not really seeing Luca. Grandma’s the only one who can see him a little bit.”

“Giulia is the same thing, we wanted to make sure there’s a little loneliness so there’s the space that gets filled with an important friendship. That’s a lot of the things we talked about that felt really important to talk about in a way that, especially today, like, how hard it sometimes is to have the meaningful strong friendships. How do differences challenge us?”

“There’s a lot of ‘Oh, look at that guy in the background doing this and that.’ We are very intentional in making this such a rich world that I’m very excited about repeated viewings because of that. The other side that we start talking about is, ‘Oh, wouldn’t it be cool to do a viewing party and I can start telling you about how that sign means this or that is my favorite Italian author. You should read his books.’”

Finally, both Casarosa and Warren spoke about Vespas, since one of the main storylines in the film is about a Vespa race. Casarosa said, “I always appreciated the beautiful designs of the Vespas… I love in our movie that they’re trying to make their own and they’re just trying to make these – we call them ‘janky Vespas’ when we made them, which is kind of my favorite thing about it.”

Warren added, “I’ve always just thought it was such a sweet version. It really shows that childlike thinking, that they are kids and their notion of seeing the world is something you could do that on Vespa. You know? And I just feel like it captures that spirit of imagination, and not really understanding things.”

You can learn more about the movie in our previous Pixar’s Luca preview. 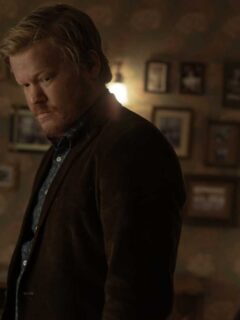 Next
Firestarter Movie Starts Filming in Canada
Click here to cancel reply.
Disclaimer: This post may contain affiliate links through which we earn a commission if you decide to make a purchase, at no cost to you. As an Amazon Associate, we earn from qualifying purchases.
Amazon Prime Day 2021 is June 21 and 22! Click here for the deals.