Home Streaming We Chat with the Animaniacs Cast and Crew!

We Chat with the Animaniacs Cast and Crew! 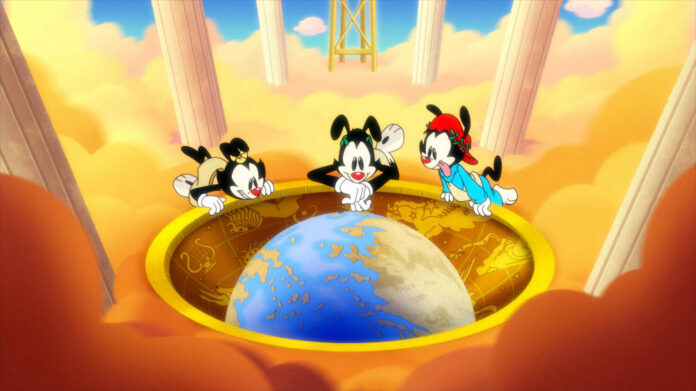 Vital Thrills got a chance to talk to the Animaniacs cast and crew! You can watch the virtual roundtable using the player below.

The Animaniacs cast and crew talked about the changes in the show, revisiting characters we love, and so much more!

Hulu, Amblin Television and Warner Bros. Animation will unveil a brand-new version of the iconic family friendly cartoon series for the whole family, as the Warner siblings, Yakko and Wakko, and the Warner sister Dot, have a great time wreaking havoc and mayhem in the lives of everyone they meet.

After returning to their beloved home, the Warner Bros. water tower, the siblings waste no time in causing chaos and comic confusion as they run loose through the studio, turning the world into their personal playground.

22 years of pent-up zaniness is coming your way when all-new episodes premiere November 20 on the streaming service. The show will return to Hulu for a second 13-episode season in 2021.

Previous articleDMZ Series Starring Dawson and Bratt Coming to HBO Max
Next articleShowtime Sets 1917 Premiere, Cybill Shepherd Joins I Love This for You

The Hulu December 2020 launch schedule has been announced and can be viewed below. The streaming service has also revealed the titles that will...
Read more
Streaming

69: The Saga of Danny Hernandez Now Streaming on Hulu

Hulu has released the film 69: The Saga of Danny Hernandez today. You can check out the trailer and pics from the documentary about...
Read more
Movies

The Hulu programming slate for Winter 2020-2021 has been released and can be viewed below. You can click on the titles of the Hulu...
Read more
Streaming

Hulu has revealed the new Animaniacs trailer, which you can watch using the player below. 22 years of pent-up zaniness is coming your way...
Read more