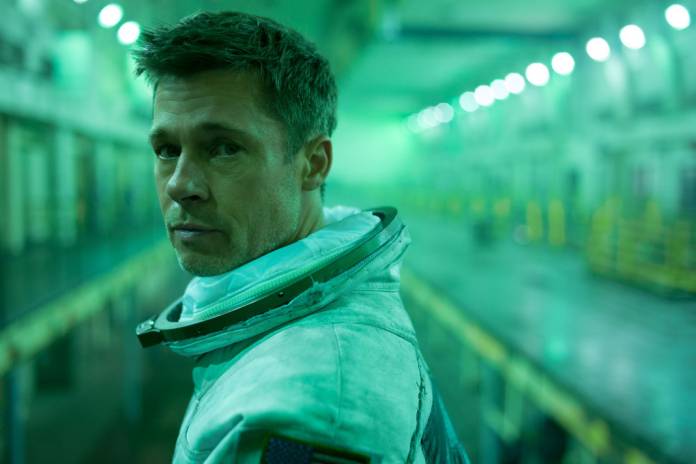 Man is a solitary creature. If there is anything to take from James Gray’s loving, and lovingly strange, 2001: A Space Odyssey hat tap, it’s the aching hole inside individuals which no amount exploration or discovery can fill. That may not be particularly comforting to fans of human scientific advancement, but its combination of cynicism and sentimentalism brings, if nothing else, a new perspective of the space epic, one which embraces both the poetic image and the humans within them. The infinite distance of space is nothing compared with the vastness between people, but it is within our power to do something about one of those.

Roy McBride’s (Brad Pitt) father had such a colossal impact on his life that even missing 30 years, Roy continues to strive to be like him. Roy has followed him in his career as an astronaut as his father did, has cut off the people in his life in favor of his career as his father did, does not see any positives in simple human connection as his father did. All in lieu of ever seeing the man again, or so he thought until sudden pulses of anti-matter from Neptune both show evidence that the elder McBride (Tommy Lee Jones) is still alive and threatens to disrupt civilization on Earth. Flinging himself into the vastness of space, it’s up to McBride to save the Earth from the dangerous energy pulses – either by rescuing his father, or destroying him.

Split between its twin desires of internal examination and general entertainment, Ad Astra frequently feels like the product of a studio taking Stanley Kubrick’s space masterpiece and attempting to make something more understandably commercial out of it. The result is Terrence Malik-like existential philosophizing existing next to moon pirates. It’s a strange fit. Poetic existentialism lends itself to many interesting things, but creating drama out of a race against time is not one of them.

Gray (who co-wrote and directed) seems much more at home between the moments, resting on Pitt’s face and letting his voice over drift from idea to idea. Some of that is the natural inclination to the viewer to fill in the gaps, as McBride’s inner poet is vague enough to allow the audience fill in meaning between the gaps. If left to this, Ad Astra might be able to make the case for being the sort of internalized epic it strives for, but frequently it gets away from everyone, hammering on both its inspirations and aspirations. McBride’s trip to the Moon is very intentionally a reproduction of 2001’s similar journey, albeit faster and mildly less banal, making the subtext text as Gray lets us in on all of McBride’s thoughts about the situation. He de-romanticizes space travel to the point of scowling at it, questioning whether it’s worth all the trouble.

The main interest here is loneliness, or more accurately the meaning of being alone and how it affects us, juxtaposing the vastness of space (and expected loneliness of long distance space travel) against good old fashioned human isolation. Pitt himself is excellent in the role, in no small part because he has to be. Ad Astra’s own thematic imperative requires him to frequently be the only person on screen. For all its fantastic visuals (cinematographer Hoyt Van Hoytema channels much of his Interstellar work here) we’re often left with just a man’s face. It is potentially the biggest little movie anyone has ever attempted.

There is a lot to really appreciate in Ad Astra. There’s even a little bit to like. It’s startlingly beautiful with one of Pitt’s best recent performances, and truly a new take on a familiar genre. It’s also pushy with a final thought unworthy of all that has come before it in its sentimentality. Maybe a little fewer explosions and a lot fewer definitive statements would have pushed Gray’s epic to the heights he was aiming for. We’ll never know. It’s not going to set the world on fire or produce the sort of startling character insights it seems to be aiming for, but it’s not quite settling for the same thing, either. That’s not nothing.

Ad Astra opens in theaters on September 20, 2019. Click here for all our Ad Astra coverage.

Previous articleMaleficent: Mistress of Evil Special Look Released by Disney
Next articleNew Harriet Poster Says to Be Free or Die

Frances Hodgson Burnett's 1911 novel The Secret Garden (check price at Amazon) has been adapted before. It's been on the big screen...
Read more

Netflix has announced the movies and TV shows that are coming to the streaming service in November, as well as the titles...
Read more

Mank Trailer and Poster Take You Back to the 1930s

Raya and the Last Dragon Trailer Revealed by Disney!