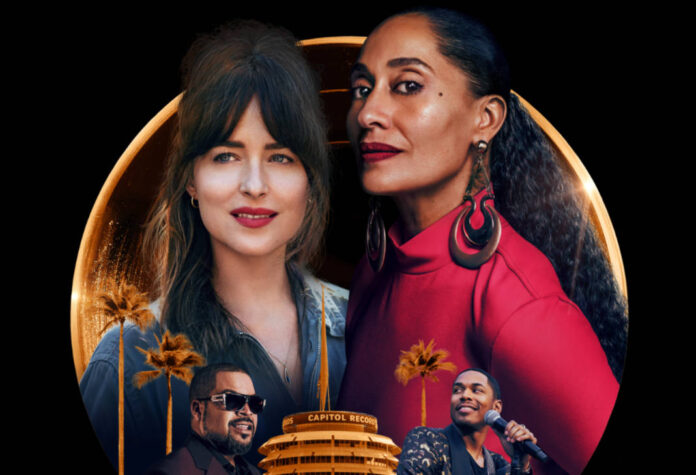 It’s not the end all of a new film when it sticks to a premade plot formula. There are only so many stories out there after all (between five and seven depending on who you listen to). Sure when new milieus arrive there are changes to fit the new background but that only goes so far. From there it’s as much about how those formulas are followed as it is about raw creativity or originality – the depth of the characters and how they express that depth.

On its face it is a straightforward unknown-to-artist story against the backdrop of the cutthroat, narcissistic world of Hollywood which hides a burning desire to create. In its heart it is that, too, and little more. The unknown is long-suffering assistant Maggie (Dakota Johnson), who longs to be a music producer but spends most of her time fulfilling the trivial needs of aging R&B queen Grace Davis (Tracee Ellis Ross).

After she discovers a promising young talent (Kelvin Harrison Jr.) in need of a push, she’s finally found the means to breakthrough for both of them, or would if her assistant job didn’t keep making requirements on her time. When Grace gets ready to release her first new album in several years, Maggie sees a chance to help everyone by having David open for her… and walks right into the middle of family drama which could upend all her hopes and dreams.

It’s not just that every trope of the ‘Star Is Born’ variety is here, though they are. It’s not even that every choice Maggie makes is telegraphed years ahead of time (and more so if you’ve ever seen one of these films before) or that every relationship she has is a tried and true formula from her spunky roommate to the annoying co-worker who long ago accepted life as a leech on Grace’s fame. Even the supposed surprise twist is both overly telegraphed and so easy to figure out it removes any depth from the actual dramatic reveal.

Rather than marvel at the intersection of characters’ lives, we marvel at their stupidity for not seeing what was right in front of them and at the ridiculous coincidences we’re asked to accept. And it’s all put together into a cloying, insipid product which wants to say something about the lives of the women it is portraying but can’t seem to manage more than repackage the best hits of yesteryear. Maggie the producer would be disgusted by the movie Maggie the character finds herself in.

It’s worse considering how much talent is involved here. The actors all do their best; Johnson has certainly done a lot more with a lot less but the screenplay by Flora Greeson does her no favors. Maggie seems unable to do anything but continue forward in a straight, predestined line like one of Wittgenstein’s nightmares, and there is little Johnson can do to elevate that sort of thing.

Ross is in similar straights, though at least she gets the benefit of her darker side being portrayed realistically (if mercurial) as opposed to the shrieking harpies of stuff like Mommy Dearest. That is, to put it mildly, a low bar.

But maybe that’s a problem. Director Nisha Ganatra’s similar low-key approach to melodramatic moments in hit Late Night is present here from time to time as well, keeping the lows from getting ridiculous and unbelievable but missing out on the impact of the highs. It’s a tricky balance and The High Note suffers from the act of maintaining it.

None of which is to say that The High Note doesn’t have something to say. There is a definite concern about the cost of following a career in the arts, particularly to the highest levels, and the dedication it requires of those who will. Grace gives up a child as a young woman and has no close relationships except her long-time manager (Ice Cube) and even when Maggie is explained how many personal events she will miss because her career demands it, she doesn’t seem to fully understand or care.

Like athletes throwing their future health away for momentary glory now, the Hollywood dream is built on the backs of the young who can’t yet understand the full cost of getting what they want. It’s a story which has been told before, sure, and one which still has facets worth exploring.

But The High Note is not the film to do it.

The High Note will be available On Demand for a 48-hour rental period starting on May 29.

The High Note Releasing On Demand May 29

Focus Features will make The High Note available On Demand for a 48-hour rental period starting on May 29th, the studio announced...
Read more
TV

Focus Features has revealed the trailer and poster for The High Note, opening in theaters on Friday, May 8, 2020. The film stars Dakota Johnson, Tracee...
Read more
Movies

LaBeouf, Johnson, and Gottsagen in a Peanut Butter Falcon Featurette

Roadside Attractions has provided VitalThrills.com with a new The Peanut Butter Falcon featurette. You can watch the featurette below and you can still view...
Read more
Movies

Today we have a new trailer for the upcoming Roadside Attractions film The Peanut Butter Falcon. You can check out the trailer in the player...
Read more
Movies

Ice Cube Has Been Cast in Focus Features’ Covers

Diana Ross: Her Life, Love and Legacy is Coming to Theaters

Diana Ross and Fathom Events will celebrate the star's 75th Diamond Diana Birthday Celebration with a special gift to fans around the world. The...
Read more

ABC Studios and Marvel Television have released a first look at Marvel's Agents of SHIELD Season 7 Episode 8 in the form...
Read more

HBO Max has given the green light to a second season of the series Legendary and acquired worldwide rights to the documentary...
Read more
Load more