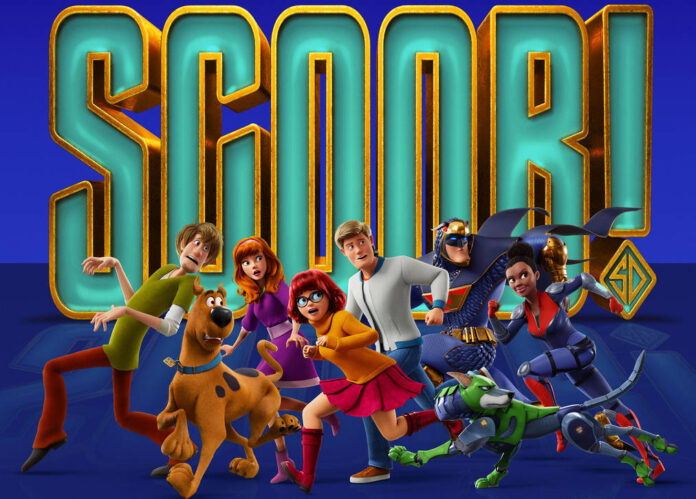 The glass-is-half-empty among us have been decrying the death of cinema for many years, triggered by the increasing focus on reinventing old IP in the face of increasing apathy towards original material. The glass-is-half-full side will respond that the origination of the material matters less than what is done with it and talented individuals have made excellent material out of ‘for the masses IP’ at least as long as we’ve been able to write things down.

To paraphrase John Lennon, give an artist a potted plant and a zither and he’ll get something out of it, but it’s hard not to join the half-empty crowd in the face of stuff like Scoob! (buy or rent at Amazon).

Warner Bros. Pictures has been trying to jump start its non-DC, kid-oriented IP for a new global audience for at least 15 years now and no matter how young and re-invented they try, it keeps failing. And no matter how many times they fail, they keep trying. So points for tenacity, but it’s impossible for Scoob! to feel like anything other than what it is – a film that never would have been made except the studio felt it had no other choice but to make it.

A lot of skilled professionals have been hired to do a professional job, and they have, but at no point does it feel alive or give anyone reason to spend time on it. Plenty of good movies have come out of that process before, but Scoob! is not one of them.

What it is, is what it is, and never has Joe Pesci’s succinct explanation of the banal futility of life been so on the nose. Re-invigorating interest in various cartoon characters by linking them up with the most recognizable character in the stable is not just a general description of the film but it’s actual plot.

After disposing of Scooby-Doo’s signature elements — kids investigating supernatural goings-on and discovering the mundane crime underneath — in the opening minutes, Mystery Incorporated quickly separates on the advice of America’s Got Talent judge Simon Cowell (which is a sentence I have actually written).

When Scooby-Doo is nearly kidnapped by the vile Dirk Dastardly (a perfectly-cast Jason Isaacs), he hooks up with the heroic Blue Falcon (an equally-perfectly cast Mark Wahlberg) and Dyno-Mutt (Ken Jeong) to stop Dastardly’s plot to open a doorway to the Grecian underworld, a plot which requires Scooby-Doo. In the process, they careen across several of Hanna Barbera’s other cartoon characters like the manic Captain Caveman (Tracy Morgan) and his now grown former sidekick Dee Dee (Kiersey Clemons).

Sure, there’s a more typical through line about the power of friendship and the need for people to have friends and not push them away, but that’s a gloss on Scoob!’s very cynical and obvious focus.

And none of it makes much sense. Sure the plot is gobbledygook but they usually are and it’s fine as long as the mechanics are explained enough and stuck to. It’s more intrinsically ridiculous. Scooby and the gang’s most well-known tropes (mystery hunting, men in masks, chases) are done away with in the name of reinvention and world building, with the idea that this is a new Scooby-Doo for a young audience generally unfamiliar with him beyond general cultural osmosis.

The story revolves around supporting characters and cameos from less well-known characters like Caveman and Dastardly, built for an older audience very familiar with all of it. It’s going in two directions at once that cancel each other out – the young audience isn’t connected enough with the old characters for their mere presence to matter and the old audience isn’t getting what they’d want form their classic favorites. It is the worst way possible to do this sort of thing.

There are bright spots, sure. As noted, Wahlberg works wonderfully as the boastful, spoiled Blue Falcon who gets most of the best jokes and steals most of the scenes he is in. And Isaacs, who has done some version of Dick Dastardly / Snidely Whiplash in his many scenery chewing villain roles in his career is about as perfect a fit for this version as could be. And Junkie XL’s score kicks about as well as you’d think it would, even attached to such a clunky film.

But the rest of the roles are overwhelmed by stunt casting that doesn’t fit (Jeong is wasted as straight-dog Dyno-Mutt and Morgan doesn’t play Captain Caveman so much as recite his lines).

Director Tony Cervone has been making Warner Bros. cartoons for a long time and knows how a good sight gag or sequence should work, but the crisp computer animation makes much of it antiseptic and heartless while engaging in some of the worst clichés of the genre (imagine lots of cameras flying around without cuts all the time, and how muddy that makes the storytelling and the composition) fit around a screenplay stuck at sitcom on autopilot mode.

It’s all so lacking in… anything. People love to talk about heartless corporate synergy in place of filmmaking, and most of that is overblown, but every so often you get a film that can’t be described as anything else. Scoob! is not the death of cinema, but damn if it isn’t as dispiriting as if it were.

Judd Apatow has a long history of “Lovable Losers” in his work. All the way from Freaks and Geeks to The 40-Year-Old...
Read more

The Walt Disney Studios has made significant changes to its release schedule today. The changes include three anticipated Marvel Studios movies -...
Read more

HBO Max is set to explore the origins of the Peacemaker character, the master of weapons from upcoming The Suicide Squad, in...
Read more

Hulu has released the official Helstrom trailer and poster, which you can both view below! All 10 episodes of the Marvel Television...
Read more

Netflix has announced the movies and TV shows that are coming to the streaming service in October, as well as the titles...
Read more
Load more