More
Home Movies Spies in Disguise: Masi Oka and the Directors on the Animated Film

Spies in Disguise: Masi Oka and the Directors on the Animated Film 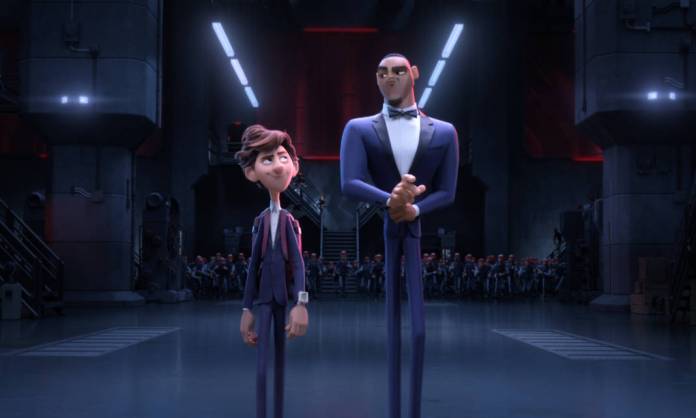 Spies in Disguise opens in theaters on Christmas Day, and VitalThrills.com recently got a chance to attend a roundtable discussion with directors Troy Quane and Nick Bruno, as well as star Masi Oka (Heroes). We learned all about how this is a love letter to spy movies, the worst thing Oka’s character Kimura has ever done and the positive message of the film.

In Spies in Disguise, super spy Lance Sterling (Will Smith) and scientist Walter Beckett (Tom Holland) are almost exact opposites. Lance is smooth, suave and debonair. Walter is… not. But what Walter lacks in social skills he makes up for in smarts and invention, creating the awesome gadgets Lance uses on his epic missions. But when events take an unexpected turn, Walter and Lance suddenly have to rely on each other in a whole new way. And if this odd couple can’t learn to work as a team, the whole world is in peril.

Bruno spoke about how they based this on a few famous spy films. “We’d like to think of this movie as a love letter to all spy movies,” he said. “We know that for kids, this might be their first real spy movie, so we wanted to do it justice. So we did our research, we went back we watched all the Bonds, the Bournes, the Hunts, watched all those guys. And you know there’s definitely some homage in there to some other movies. But at the same time… we want to do something different and, because it’s a movie for kids, we felt there was a responsibility to say something about teamwork.” 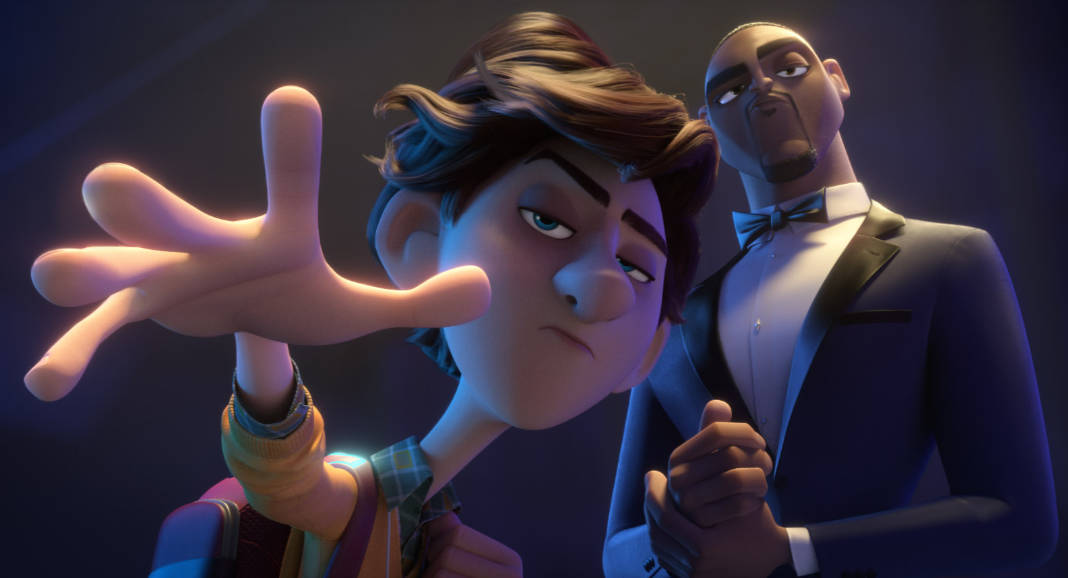 Bruno added that they really enjoyed “going back and watching all the spy films,” particularly the title sequences. He explained, “We looked at some of the Saul Bass stuff, and some of their angularity, and their shape and their color language, and we just tried to find ways to get that DNA into the frame of the film.”

“But not necessarily make it a vintage throwback,” Quane added. “We really wanted to make it feel contemporary and current. [We asked ourselves], what were the aesthetic design principles we appreciate there, but making it feel current so it didn’t feel like a throwback.”

In the film, the message is very clear; hurting people makes them hurt other people, and violence isn’t always the answer. Walter comes up with gadgets like an inflatable hug and a glitter bomb, which Lance doesn’t quite appreciate at first. Of course, once he gets turned into a pigeon, things change.

Bruno told us about the message, saying, “It felt false to pretend that there wasn’t violence in the world. I mean, I think you turn on the news and you know that that’s not the case. But we were really specific in how we’re using it, that we weren’t glorifying it. That it was mainly at the hands of the bad guys… there’s a better way than when we use violence to solve our issues. All we do is create more enemies. When we draw a line that puts people on the other side of that that we have to reach across that line and bring people together.” 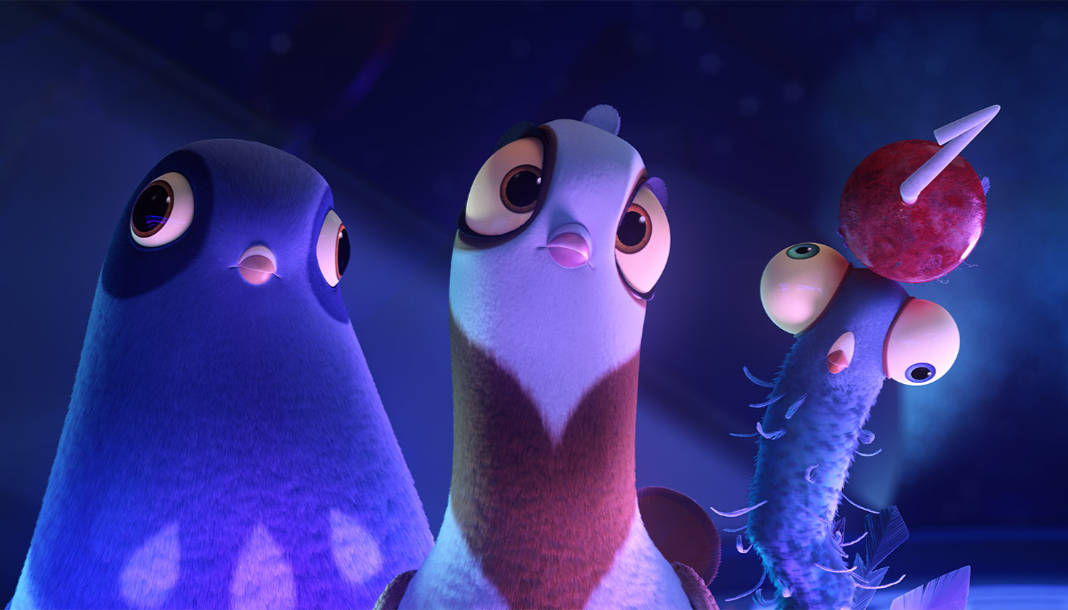 The pigeons are the highlight of Spies in Disguise, particularly Crazy Eyes, who has a lollipop stuck on his head and vomits all the time. Bruno spoke about their pigeon research. “Pigeons are those things that most people ignore or think of gross, but they’re really phenomenal. That’s kind of where Walter’s genius comes into play as a spy, there’s no better thing to be than a pigeon… they’re in every major city around the world, people ignore them for the most part, but they’ve got all kinds of really cool sort of special abilities. Pigeons can fly really fast, up to 92.7 miles an hour, the only natural predator they have is a peregrine falcon, but pigeons can bank it like almost 90 degrees, which is unbelievable. And we’ve watched YouTube videos with them like drafting behind cars and traffic… they’ve got eyes on the side of their head so they can see almost 360 degrees, so nobody can sneak up behind you, which is a pretty cool thing if you’re a spy. They can see UV light. So the idea that they can possibly see infrared sensors and lasers. So there’s all these really cool fun things that are like these built in gadgets… we had a lot of fun with that with the idea of being able to see someone’s face and your butt at the same time.”

Masi Oka told us about his mid-level boss character Kimura, comparing him to a character in a Japanese Western. “He’s not really an action guy, per se,” he said. “He tells people what to do… there’s all these Japanese Jidaigeki, the Westerns of Japan, where you have the big boss Daimyō, that sits in the back and tells his henchmen, ‘Go! Go get him!’ That’s pretty much my inspiration. The guy who doesn’t do anything, just watches all his henchmen, and of course, all the henchmen die, and he’s like, ‘Oh, OK. I’ll take care of it myself.’” He also described Kimura as a “teddy bear,” and told us his “deepest, darkest secret is that he has peed in a pool.”

Are you guys excited for the film? Let us know in the comments.

With the film launching on Disney+ this Friday, July 3, Disney has released a few new Hamilton videos that should hype you...
Read more
Movies

The Walt Disney Studios has released a new Soul preview that debuted during a virtual panel titled "Finding 'Soul'" from the Essence...
Read more
Movies

The Walt Disney Studios announced today that the Mulan release date has been moved back from July 24 to August 21, 2020....
Read more
Movies

Margot Robbie to Star in New Pirates of the Caribbean Film

Margot Robbie is reteaming with her Birds of Prey writer Christina Hodson on a new Pirates of the Caribbean film at The...
Read more
Streaming

Hamilton Trailer and New Photos from the Filmed Version

The Walt Disney Company has debuted the official Hamilton trailer, which gives you a first look at the film coming to Disney+...
Read more
Movies

The One and Only Ivan Going to Disney+, Beatles Doc Pushed Back

The Walt Disney Studios announced today that adventure film The One and Only Ivan, based on the bestselling, award-winning book (buy at...
Read more
Movies

Avatar 2 Production to Continue Next Week!

Producer Jon Landau has some good news for Avatar fans today. The Avatar 2 production is headed back to New Zealand next...
Read more
TV

The Wonderful World of Disney Returning on Wednesdays

ABC has announced the return of The Wonderful World of Disney, which will present several iconic Disney feature films this summer. For...
Read more

Amazon Game Studios has announced it is delaying its massively multiplayer online role-playing video game New World until Spring 2021. You can...
Read more

Sony Pictures announced today that the Monster Hunter release date has been pushed back from September 4, 2020 to April 23, 2021....
Read more
Load more