More
Home Movies A Beautiful Day in the Neighborhood Review

A Beautiful Day in the Neighborhood Review 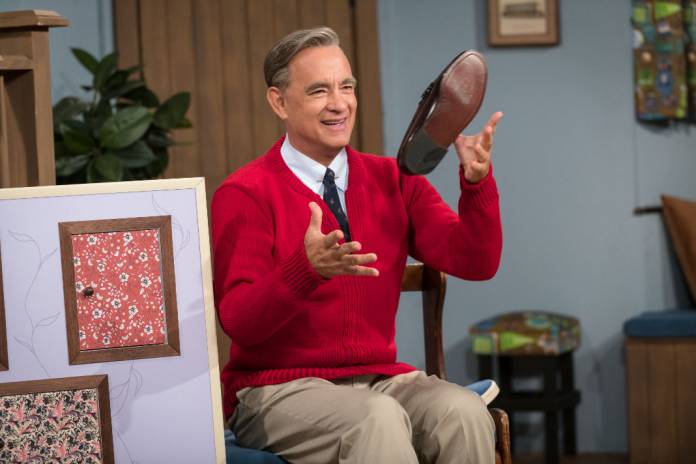 To use a baseball metaphor, the idea of Tom Hanks playing Fred Rogers is a lot like a 70 mile-per-hour fastball pitched right across the plate to someone like Hank Aaron or Mickey Mantle – you just know that little white stitcher is long gone. Who else but Hanks to play Fred Rogers? You could cast some character actor with similar looks to the part, but there’s a certain weight to Hanks that brings significance to the role that those other actors couldn’t hope to attain. For audiences unfamiliar with Mister Rogers or the television show, casting Hanks is pure shorthand for them – if there is any actor as close to being beloved as Fred Rogers was, it’s Tom Hanks. Fred Rogers was unlike anyone else on television before or since. The common perception of him was, and still is, one of the few genuinely good people in the world, and if you want equal that emotional representation in the audience’s eyes, Tom Hanks is your man.

So, yeah, Tom Hanks knocks it out of the park. That was never going to be a question. What is surprising about A Beautiful Day in the Neighborhood is that it’s not really about Fred Rogers.  It’s about us, and how kindness and forgiveness are more difficult than even Fred Rogers can make it appear on television with his puppets, his cardigan sweaters, and his music. And, even though Tom Hanks is as good as you would expect as Fred Rogers, Hanks still manages to take Fred Rogers to unexpected places. Hanks is also lifted up by the surrounding performances, which are strong and poignant.

Based on an Esquire article by Tom Junod, A Beautiful Day in the Neighborhood is a largely fictionalized account of reporter Lloyd Vogel (Matthew Rhys), an investigative journalist assigned an interview with Rogers by his editor on a feature piece about heroes. Of course everyone familiar with Mister Rogers considers him a hero, so to Lloyd Rogers has to be hiding something. Vogel has a lot on his plate already – he is a new father, and his own estranged father Terry (Chris Cooper) is trying very hard to have a reconciliation with Lloyd, but Lloyd is having none of it, unable to forgive his father his indiscretions and for leaving his mother when she was dying. Lloyd’s anger is also affecting his relationship with his wife Andrea (Susan Kelechi Watson). For Lloyd to move forward, he needs support from an unlikely source – his interview subject.

As Lloyd continues to dig into Rogers’ life, Lloyd’s own life becomes more conflicted and filled with regret. Matthew Rhys makes his character’s unease and anger palpable. Is Fred Rogers the real deal, or is he simply another vacant celebrity? As Fred Rogers is a father figure for much of the nation, it doesn’t take much for Lloyd to equate his interview with Rogers to Lloyd’s personal issues with his own father. There is a wonderful moment during a particularly contentious interview, where Lloyd asks Rogers a pointed question about how Rogers’ own children cope with his nature and his status as America’s caregiver, and the way Tom Hanks as Rogers responds is, frankly, why you hire Hanks for this role in the first place. You can see the anger behind Rogers’ eyes at the question give way to a personal realization and an understanding. 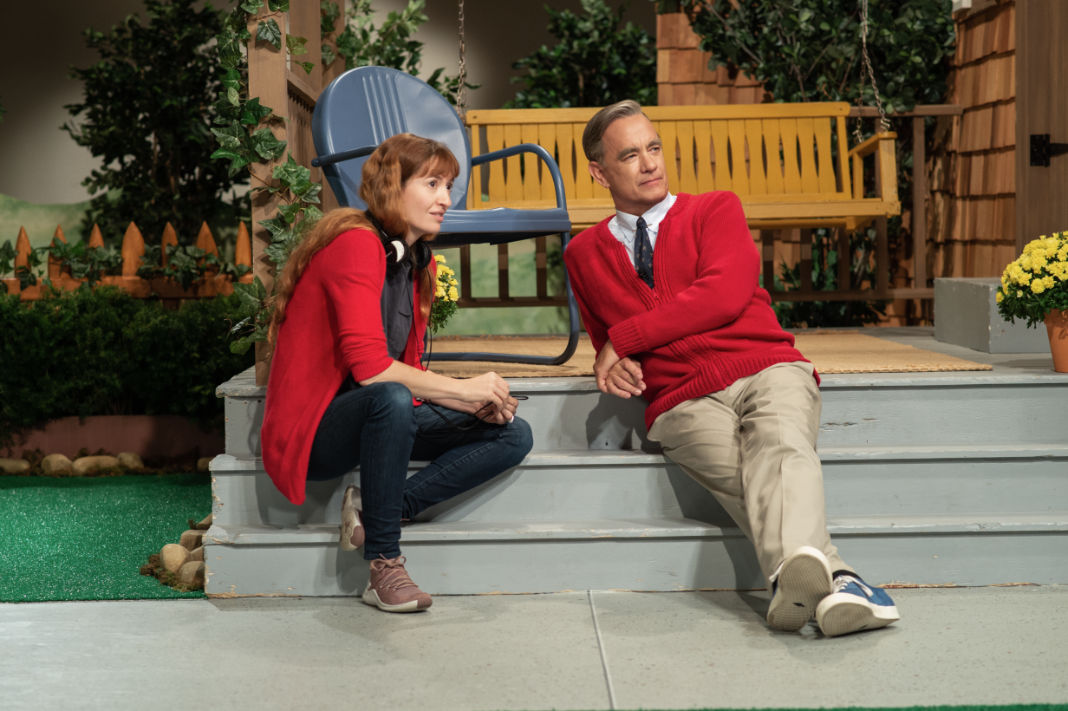 Tom Hanks has grown so much as an actor, even since his days of receiving Oscars two years in a row for Philadelphia and Forrest Gump. Hanks’ best moments aren’t the times when we see Fred Rogers speaking, performing, or counseling, but when Rogers is quietly listening, storing every bit of pain and confusion from his subjects. This isn’t a karaoke performance; Tom Hanks isn’t simply copying Rogers’ mannerisms and speaking voice. He’s trying to find the center of Fred Rogers as a human being, and the way he succeeds is a testimony to Hanks’ own great abilities.

Director Marielle Heller frames this story almost like an extended Mister Rogers’ Neighborhood episode, and we slowly realize that, even now, Fred Rogers is still teaching life lessons and how to cope with complex emotions. One sequence is surprisingly surreal, as Lloyd’s confusion and despair comes directly in conflict with Rogers’ optimism and need to help, and Lloyd finds himself inside the television show. Watching those television reenactments reminded me just how elegantly quiet Mister Rogers’ Neighborhood was, almost as if the show was a respite from the tornado of complex, powerful emotions that kids — and adults — undergo at every moment. It was like those warm sweaters that Mister Rogers wore every day, and Heller is to be commended for not only getting the tone of those shows right, but also the calming, contemplative nature of what Rogers was striving to accomplish with every episode. Rogers considered the space between the television and the eyes of the child watching sacred ground, and Heller makes you feel that profundity.

This isn’t an all-encompassing story of Fred Rogers’ life, not like last year’s documentary Won’t You Be My Neighbor?. Those unfamiliar with the work of Fred Rogers should see that film immediately. There are a few moments of drama in A Beautiful Day in the Neighborhood that feel a bit stagy, mostly between Rhys and Chris Cooper. But none of the sequences with Fred Rogers feel false or orchestrated. This may seem to have been an easy decision for Tom Hanks to play this American icon, but there are deep subtleties and honest moments in his work that can only be done by an extraordinarily gifted actor, and Hanks brings his considerable skills and talents to bear here. A Beautiful Day in the Neighborhood isn’t brash, or loud, but quietly insistent; we are all in the grip of massive emotional forces, and Rogers, for many of us, was the lifeboat that rescued us from tumultuous seas. He saw great value and worth in every soul he came across, and in this cynical world, it is easy to doubt that veracity. It is a struggle to forgive. It is hard work to be kind. A Beautiful Day in the Neighborhood reminds us all that, in those moments, we can find true grace and peace. This is a remarkable film.

A BEAUTIFUL DAY IN THE NEIGHBORHOOD REVIEW RATING: 9/10

Sony Pictures‘ A Beautiful Day in the Neighborhood opens in theaters on Friday, November 22. You can view all our updates on the movie by clicking here.

A Beautiful Day in the Neighborhood
1 of 6

Following the Tenet and Conjuring 3 date changes and all of the Disney changes today, Paramount Pictures and Sony Pictures have now...
Read more
Movies

Sony Pictures announced today that the Monster Hunter release date has been pushed back from September 4, 2020 to April 23, 2021....
Read more
Movies

Apple today revealed that the Greyhound release date has been set for July 10. The movie, which was previously going to open...
Read more
Movies

Sony to Release The Broken Hearts Gallery in Theaters July 17

Sony Pictures will roll out the first major studio theatrical wide release of the summer beginning July 17 as cinemas in the...
Read more

Frances Hodgson Burnett's 1911 novel The Secret Garden (check price at Amazon) has been adapted before. It's been on the big screen...
Read more

The Walt Disney Studios announced today that the Mulan release will now take place on Disney+ and for a premium price on...
Read more

The Crabsuit Revealed from the Avatar Sequels

Avatar franchise producer Jon Landau has revealed the Crabsuit from the upcoming sequels. Landau says that the Crabsuit is "a human driven...
Read more

Chip and Joanna Gaines Are Bringing Fixer Upper Back

The Walt Disney Studios is taking you behind the scenes of The One and Only Ivan, the adventure film coming to Disney+...
Read more

Netflix has released the Ratched trailer, which gives you a first look at the eight-episode series that explores the origin of one...
Read more
Load more