What makes Maleficent: Mistress of Evil so boring? Is it the ramshackle plot which flits from character to character building up a giant climax without stakes or interest? Is it the strangeness of grafting large action pieces and violent character death onto children’s story characters? Is it the focus on world-building and mythology over character development or coherent motivations? Is it all of the above or is it something more? Some special, odious ingredient or a particularly bold misstep which transforms all the random pieces into a great goose egg. We may never know; if such causes were obvious they could be avoided and no one would need ever suffer through a Maleficent 2 ever again. But like a black hole passing engulfing a solar system, even if you can’t see the cause, the results are more than obvious.

The result in Mistress of Evil is exposition, a lot of it, starting with Maleficent (Angelina Jolie) herself explaining how — despite turning against her evil ways and saving her adopted daughter Aurora (Elle Fanning) in the previous film — she has been re-vilified by the people (Maybe everyone who saw her save the kingdom with their own eyes was coincidentally murdered, who knows). Don’t expect much explanation about that, you’ll never get, because instead the focus will be on where she came from and a brewing war between her people and the humans (again) after she is framed by an evil Queen (Michelle Pfeiffer) for an attack on the king. Discovering she is not the last Dark Fey in existence, Maleficent must choose between her daughter — due to marry the son of her attacker — and her people, peace or war, good or… well, you get the point.

And if you don’t, don’t worry, it’s going to be explained to you. A lot. The screenplay by Linda Woolverton, Noah Harpster and Micah Fitzeman-Blue retains a lot of the worst elements from Woolverton’s ill-fated Alice Through the Looking Glass. As with that film, a mediocre but harmless adaptation of an early Disney triumph has somehow necessitated a sequel so one has been created without any clear idea what would happen to the characters after the credits rolled. That’s a particular potent question for a film which cast its villain as the hero. With no good ideas, the filmmakers have reverted all of the characters back to their previous states, letting us know that Maleficent has been re-written as the villain stories cast her as in most people’s minds even though the actions of the previous film only happened a few years ago.

When Prince Charming nee Phillip (Harris Dickinson) finally asks Aurora to marry him Maleficent tries to put those wounding words aside and give Aurora what she wants, only to run into the warmongering of Philip’s mother (Pfeiffer) who seems to have an especial hatred for magical creatures. It’s one of the few moments when Mistress of Evil comes alive as Pfeiffer and Jolie square off to snarl over ownership of Aurora, casting everyone else into the shadows through the strength of their own personalities. It’s also one of the few times either gets anything to do, particularly Jolie who disappears for long stretches of the movie and even when she returns spends most of her time staring at other people while they talk to her. Mistress of Evil has decided that it’s not enough for Maleficent to simply exist in the world, it must be explained where she came from necessitating a larger and larger mythology for her origins. The result is regressive as the film always looks backwards, never forward, and spends most of its time telling and not enough showing. 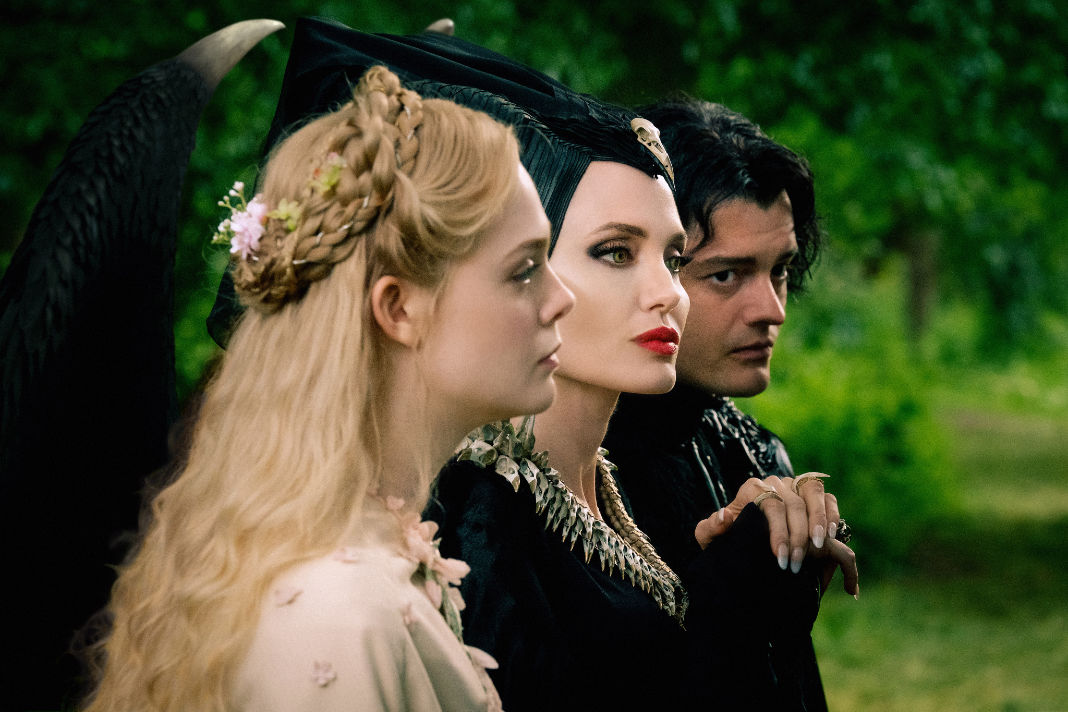 Which is unfortunate as diretor Joachim Rønning (Pirates of the Caribbean: Dead Men Tell No Tales) makes a good-looking action film. He’s got all the toys in the world to play with in constructing Maleficent’s backyard and he doesn’t waste any of them. The scenery is luscious, the effects outstanding and the set pieces first rate. Production Designer Patrick Tatopoulos in particular seems cursed to provide incredible work to substandard films. From Ulsted’s gothic palace to the home of the Dark Fey — a warren of giant, twisty birdnests — the world of Mistress of Evil looks as fantastic as its writers seem to want the explanations to be. That is, when we can see it, as tremendous amounts of the film are set at night. Cinematographer Henry Braham (Guardians of the Galaxy) does his best with it, but the prime answer seems to be having every night be a full moon. As with much of the film, the request seems to be “don’t think about it too much.”

Except for the bits they want you to think about. Mistress of Evil is simultaneously overdone and undercooked, with a lot of the customary mistakes of giant studio entertainment. Someone, somewhere has spent a lot of time talking about why the world should look like it does, why the backstory should be what it is, but not enough time figuring out why anyone should care.

Maleficent: Mistress of Evil
1 of 42

Waaaayyyy back in what we call the Golden Age of Hollywood, it wouldn’t be unusual for studios to only release 50 or 60 films...
Read more

NBC announced today that JJ Watt will make his Saturday Night Live hosting debut on February 1. JJ Watt is a defensive end for the...
Read more

Netflix and The Pokémon Company International announced today that the newest animated movie based on the beloved Pokémon franchise, Pokémon: Mewtwo Strikes Back—Evolution, will...
Read more