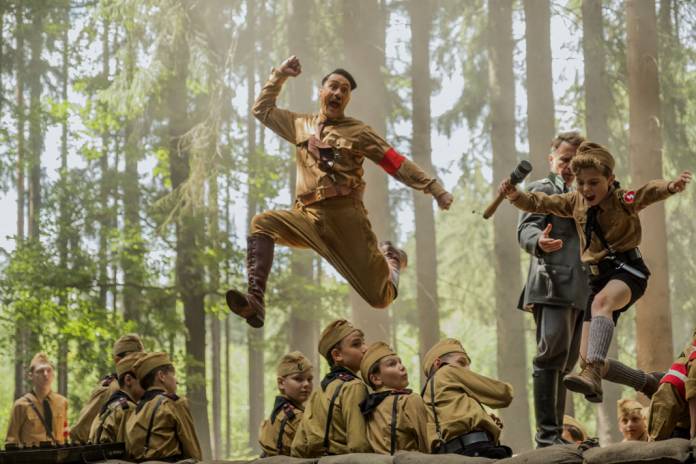 Young Jojo Betzler (Roman Griffin Davis) is a good little Nazi. He worships Adolf Hitler – so much so that he imagines Adolf (Taika Waititi) giving him advice during times of difficulty. In Germany, during the waning days of World War II, Jojo and his mother Rosie (Scarlett Johansson) try to manage an existence together, even as everything around them is falling apart. Jojo is a zealot, happily joining the Hitler Youth and wanting to do his part, but when he is asked to do something outside his comfort zone, Jojo runs off, earning him the derisive nickname Jojo Rabbit. But when Jojo makes a discovery in his home, everything he’s been taught and everything he believes in is put to the test.

Taika Waititi’s “anti-hate” film, as the ads call it, wears its emotions on its sleeve and has no reservations about pulling at your heart strings. But Waititi does something subversive during the film’s running time – he lets the humor and the ridiculousness of each situation speak for itself, and as events escalate, we find ourselves examining the fantasy of Jojo’s world as it smashes into reality. And in doing so, one cannot help but wonder about the fantasy worlds that are built every day by other kinds of zealots, and how with a little empathy and humanity those illusions can be pierced to show those true believers exactly how things really are, how they can be, in a better, kinder world. We are seeing all of this through a child’s eyes, and when the magical nature of his views slowly gives way to understanding, Jojo starts to see through the lies he has been taught. No one is their true selves around Jojo, and nothing is as it seems, but Jojo is a smart boy and slowly comes to an understanding.

Scarlett Johansson is terrific as Jojo’s mother, who tries to quietly make Jojo understand the world as it is as opposed to the world as he imagines it to be. She is a steady kindness in a place that is engineered to reward and encourage cruelty and evil, in the hopes that some of that kindness can make its way into Jojo’s heart. Davis is a revelation as Jojo, building a character arc with each scene, and the subtlety of how Davis shows Jojo’s journey is a marvel to watch. It’s a truly great child performance. No less wonderful is Thomasin McKensie (so amazing in last year’s Leave No Trace) as Elsa, a young Jewish girl who shifts Jojo’s perspective, as hate gives way to curiosity and attachment. Their scenes together are sweet and rich with emotion. Taika Waititi has always had a way with young actors, and these two quietly form an unexpected bond that feels genuine. 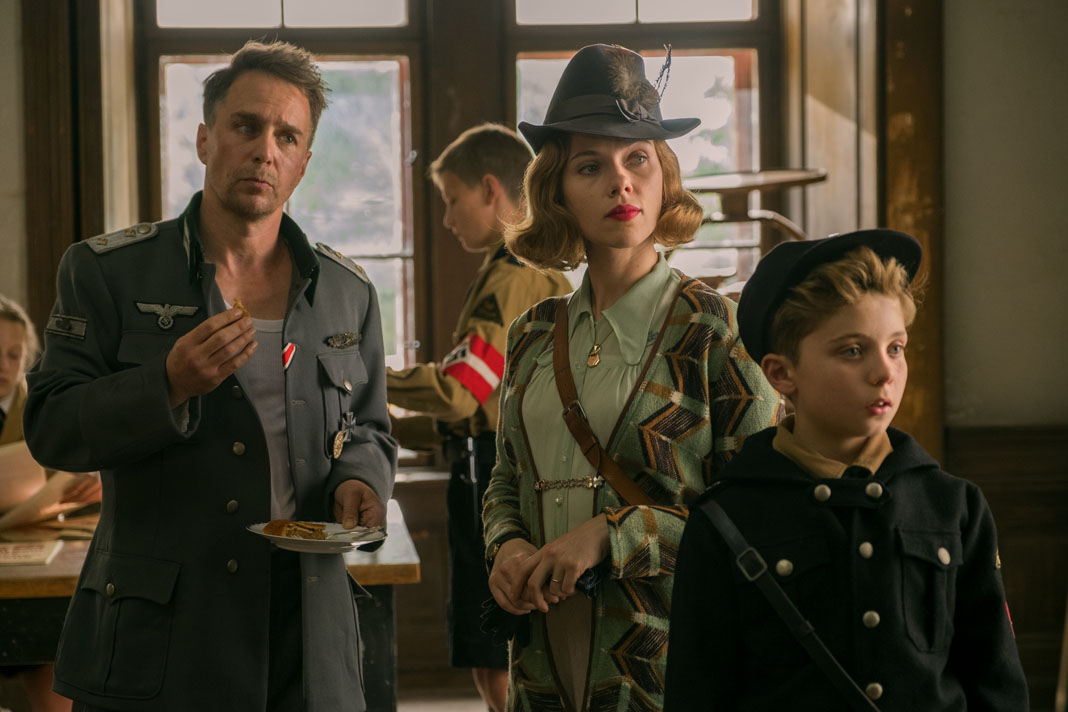 Jojo Rabbit uses humor as a disarming device, so when he pulls the rug out from under us later on, we feel the power of those moments. Waititi uses many character actors like scalpels in that regard — Sam Rockwell as a Nazi officer demoted to child duty is especially strong — and shows us unexpected facets in between his more dogmatic moments. A shared moment between Rockwell and Alfie Allen (Game of Thrones‘ Theon Greyjoy) gives us a glimpse of the man under the uniform. Rebel Wilson also commits to the satire – as the war moves towards its obvious end, she digs ever deeper into her fanaticism, and she’s hilarious. Stephen Merchant as a cheerfully “Sieg Heil” Gestapo agent is also a lot of fun to watch.

When the world seems full of cruelty and malice, and there seems to be no logic to it, when that cruelty and malice feeds on itself and people commit to it without any empathy or thought, it creates human monsters that over time seem unreachable. Taika Waititi firmly believes that is not true – that empathy and kindness can sneak in between the cracks and find the soul within. Beneath the anger, beneath the bigotry, there is a wounded soul that can perhaps be healed. In that malicious, hateful world, the only weapon is kindness. Jojo Rabbit shows us that kindness can heal and inspire – that to fall into despair and grief is just as wrong as those who would wield their hatred and cruelty against the world. Like Mel Brooks before him, Waititi uses the humor to comfort us to this essential truth. Despair has no place in a hateful world. Only kindness and understanding can see us through.

These are harsh, unflinching times. We each have to navigate these days in the only ways we know how, to find comfort wherever we can. But to lose hope, to succumb to the sorrow of these days, is not the way. Jojo Rabbit shows us that kindness and empathy can be revolutionary acts. Jojo Rabbit and Taika Waititi shouts it from the rooftops for all to hear. ¡Viva la Revolución! This is one of the best films of the year.

Jojo Rabbit opens in limited theaters on October 18, 2019. Click here for all our Jojo Rabbit coverage.

Previous articleLight as a Feather Season 2B Trailer and Key Art Debut
Next articleErica Durance Returning as Lois Lane for Crisis on Infinite Earths!

Amazon Game Studios has announced it is delaying its massively multiplayer online role-playing video game New World until Spring 2021. You can...
Read more

Sony Pictures announced today that the Monster Hunter release date has been pushed back from September 4, 2020 to April 23, 2021....
Read more
Load more