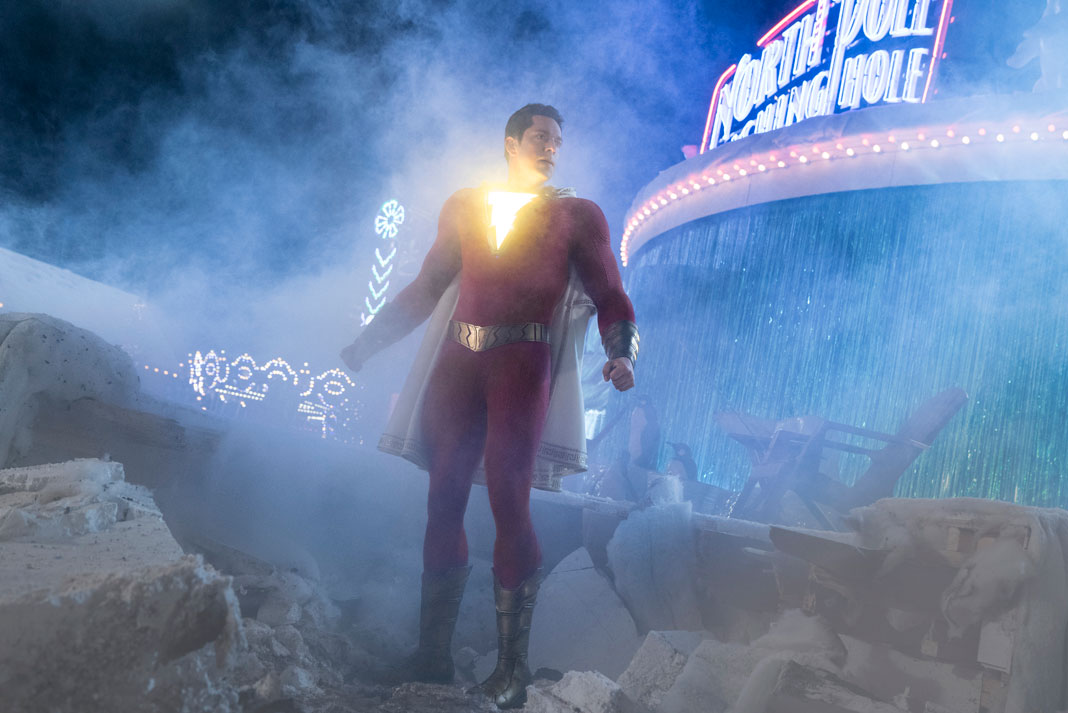 People have been talking about a change in tone for DC superhero films for a while now. I’ve certainly been one of them. There are a million think pieces on how the world has gone to hell in a handbag and how we need films that take us away from that these days. Wonder Woman changed the tone we saw in Man of Steel and Batman v Superman, and so did Aquaman. Shazam!, however, brings a different level of joy to superhero films. It also reminds us of a time when we believed that anything was possible.

Here’s the synopsis if you’re not familiar with the story: “We all have a superhero inside us, it just takes a bit of magic to bring it out. In Billy Batson’s (Asher Angel) case, by shouting out one word—SHAZAM!—this streetwise 14-year-old foster kid can turn into the adult super hero Shazam (Zachary Levi), courtesy of an ancient wizard. Still a kid at heart—inside a ripped, godlike body—Shazam revels in this adult version of himself by doing what any teen would do with superpowers: have fun with them! Can he fly? Does he have X-ray vision? Can he shoot lightning out of his hands? Can he skip his social studies test? Shazam sets out to test the limits of his abilities with the joyful recklessness of a child. But he’ll need to master these powers quickly in order to fight the deadly forces of evil controlled by Dr. Thaddeus Sivana (Mark Strong).”

I wasn’t sure what to expect here. The first trailer was cute, but the latest one was sort of boring, frankly. It seemed that the jokes about a young boy in a man’s body with superpowers was going to be overdone. Like that guy at a party who keeps telling the same story because it made you laugh politely that one time. I was pleasantly surprised. Oh, the jokes were there, but they were made so much more fun by the fact that Billy’s best buddy is a superhero fan, and the test to see which powers Shazam! has is a highlight of the film. The jokes made sense and weren’t repeated. Yes, it’s the kind of stuff that is going to make my six-year-old nephew laugh, but it’s also going to make my parents laugh. My face hurt from laughing. Hey, all-age chuckles!

Humor aside, the story is a beautiful one. It’s about belonging, and finding your family with people you care about, and not just with people who share your DNA. It never gets cloying or after school special. Billy is jaded, but not preternaturally so. Usually you see kid actors and they are either oddly adult or drowning under the adult message in the script, but not only is that not the case here, Asher Angel really inhabits the role. So much so that you might find yourself remembering a little too clearly what it felt like to make the wrong choices as a kid, or how it felt to be outside a group. Also, Angel looks so much like Game of Thrones star Maisie Williams that I’ll be shocked if they don’t play siblings at some point. 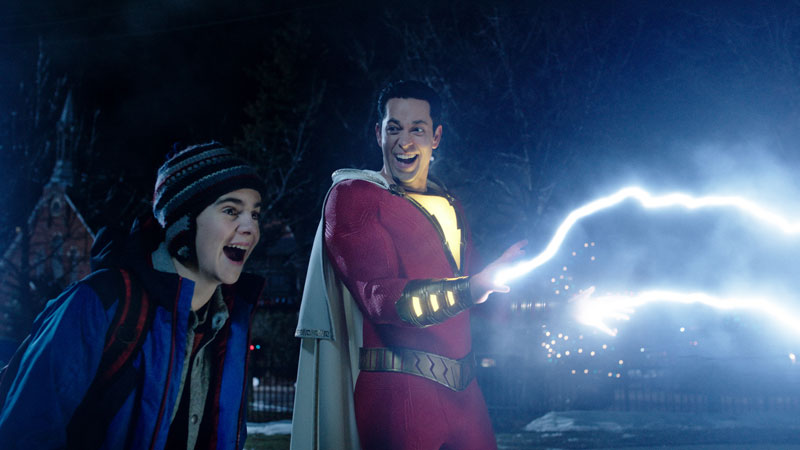 Zachary Levi’s role in Chuck prepared some of us for the fact that his casting is perfect here, but if you haven’t watched, you’re going to be pleasantly surprised. His ability to pull off geekiness and awkwardness in an adult body works perfectly here. He looks like a kid trying to act like an adult, as opposed to some weird acting exercise where you’re told to remember what it felt like to be a kid.

For parents, yeah, you are going to see them try to buy beer and there are a couple of jokes about the adult body, but it’s all in a family-friendly style. For non-parents, it doesn’t seem contrived to keep the rating at a certain level.

We also have a villain in Mark Strong who has the slight mustache-twirling feel of the ones you knew about as kids, but he also has enough gravitas to pull off a multi-film arc. (This is certainly likely to get a sequel.) There are also enough nods to longtime fans that you won’t be disappointed if you’re old enough to remember when this character’s name was Captain Marvel. For those of you wondering how this fits into the larger DCEU, all I’ll say is that it does. Anything else would be saying too much. (There are after-credits scenes, so don’t leave the theater!) 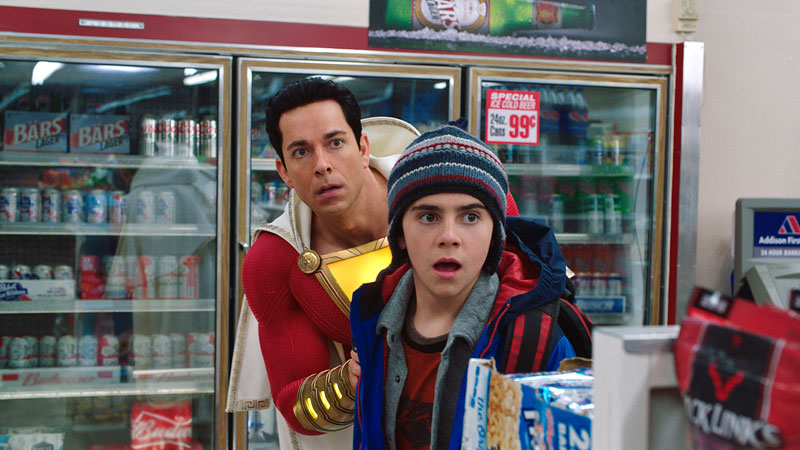 So, is there a fly in the ointment? Honestly, not really. Some of the kids in the Billy’s latest foster home are a little light on the acting skills, but not in a way that distracts. Yeah, Billy does learn important lessons in life, which can be a little predictable, but there are enough surprises that it doesn’t really matter. Yes, the caretakers of the foster home do seem like people that don’t exist, but since we’re talking about childhood wish fulfillment, having parental figures that are exactly what you’d hope to have in that situation is sort of appropriate. It might bother other people, but it didn’t bother me. I was just aware of it.

I know I’ve been giving some high marks to the latest crop of superhero films lately. I know people are sick of origin stories, but for some heroes, it’s pretty necessary. It certainly is with this character. Trust me when I say that the payoff is worth it in terms of what it will do for the DCEU and the tone of that behemoth, should this follow through in the bigger picture. I’m certainly hoping it does. Look, I’m not saying that DC movies should be more like Marvel ones. There is room for everything, and I’m not someone who has any superhero movie fatigue, so take that into consideration. I’m just saying that the change in tone is welcome, and in the case of Shazam!, it’s the perfect amount of silliness and heart.

Shazam! opens in theaters on April 5th. You can check out all the previous updates about the anticipated movie by clicking here.

For a long time complex subjects have had to be dealt with in allegory and obscurity, working around their subjects due to commercial and...
Read more
Streaming

Production on director Matt Reeves' The Batman movie was shut down for two weeks earlier this month, although that delay will undoubtedly last much longer...
Read more
Movies

With most movie theaters now closed, it's still unclear if the films currently scheduled for June will actually be released then. While we wait,...
Read more
Streaming

Star Wars: The Clone Wars has returned for its seventh and final season on the Disney+ streaming service. In this review, we're taking a look...
Read more

With current events keeping theaters closed and movies being pushed back on a daily basis, the biggest update yet has come in from The...
Read more

Universal Pictures today announced that the Candyman release date has been moved from June 12, 2020 to Friday, September 25, 2020. The studio's Praise This, which was...
Read more
Load more