Missing Link: How LAIKA Brought the Legendary Creature to Life

It has been ten years since LAIKA released their first feature stop-motion animated film, Coraline. Audiences got to experience firsthand the kind of worlds the studio could bring them to. Since the release of Coraline, the studio has introduced us to the transcendent and terrifying world of the supernatural in ParaNorman, taken us through the winding Victorian-era streets of Cheesebridge, Norvenia occupied by trolls and humans alike in The Boxtrolls, and brought feudal era Japan and the accompanying mythos to new life for Western audiences in Kubo and the Two Strings. Now LAIKA is planning on taking audiences all over the globe with their most ambitious project to date in Missing Link.

Chris Butler (ParaNorman) returns to write and direct this film, making this his second feature film with the studio. Vital Thrills got a close-up look at what has become a passion project of sorts for Butler. We got the opportunity to visit the awe-inspiring, fantasmical sets used for Missing Link as well as photograph them. This writer doesn’t think her photos do the sets justice because there is so much incredible detail work within each set, but I was able to capture some of the magic to bring back to you. Make sure you take a look at the gallery below and gaze upon all of the hard work the LAIKA team has put into these incredible sets.

Having fairly minimal knowledge about what goes into stop-motion animation, it was difficult not to be immediately sucked into the childlike wonder that took hold of me as we entered the warehouse space that LAIKA has set up shop at. As we were led into a small theater to look at the sneak peek footage of the film, my eyes were drawn to sketches of artwork from previous films. Such objects of beauty I imagined were created fairly early on in the process before gradually being transformed into the final product that audiences get to see. However, as director and writer Chris Butler explained, the duration of time that it takes to create a film like Missing Link from start to finish can be a lot longer than one would think.

“[F]rom when I first started writing it, that was more than 15 years ago,” he said. “But that’s a bit of a cheat, because it’s an idea that I had a long time ago and occasionally, I got back into it. But I think we actually started developing it about five years ago. It spent about a year in development. And then a year in pre-production. It’ll be five [years] when it comes out.” 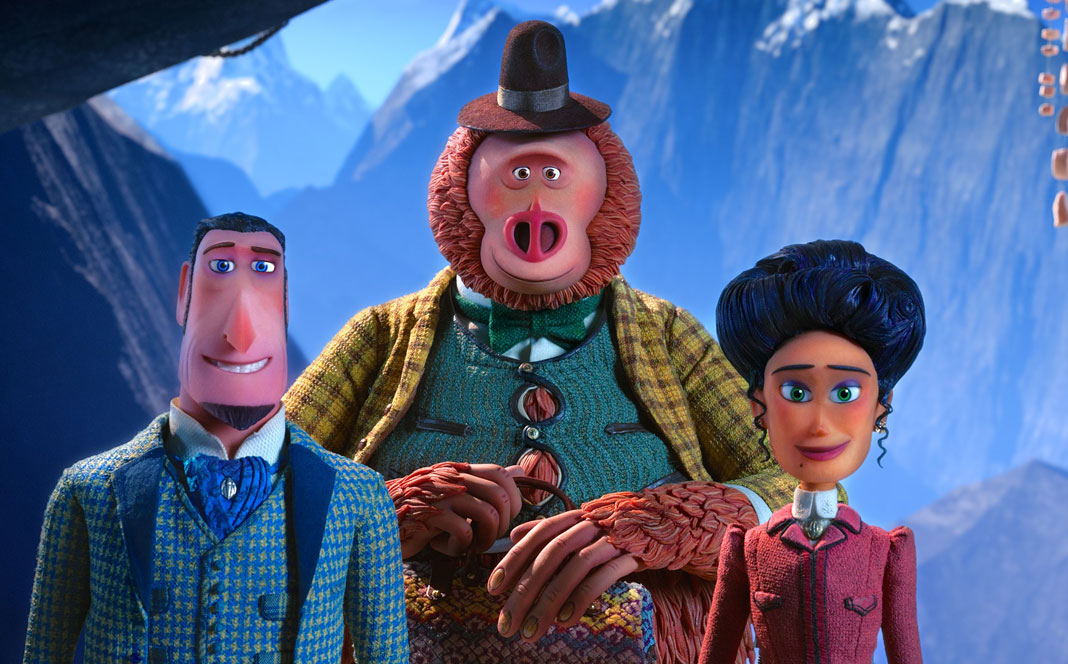 As was further explained to us by producer Arianne Sutner, shooting for the film takes approximately two years. This means full production is launched on all the sets created for the film out on the stages. At this point, all the puppets would have been created and ready to be used for painstaking shooting, where everything on the set is carefully placed for one single shot before moving onto the next frame. It is a process that moves at a glacial pace, but it has taught all involved at LAIKA how to become disciplined in a way that contributes to the whole creative process of a film.

“It’s really slow, but because it’s so slow and time-consuming, we can’t really do do-overs,” Sutner said. “So, what it does is really get the filmmakers and someone who is so individual like Chris to really understand what they want and communicate that right from the beginning. We aren’t really finding our way and there’s a discipline to that that I think shows up in the filmmaking, shows up in the final product that makes it look and feel spontaneous, but there’s a lot of time and effort that goes into anything. Before we build something in three-dimension, we want to make sure that, in fact, it is in the movie. It makes sense to the movie and we’re not going to change our minds about it.”

One thing that Butler wasn’t inclined to change his mind about was what kind of story he wanted to pursue. Coming off his feature-length directorial debut on LAIKA’s ParaNorman, the need for something outside of the film’s creepy, supernatural influence was strong. And with stop-motion animation having the reputation for being the medium used most often for genre films, the desire to step outside of the shadows and to expand how audiences perceive films that use stop-motion animation as a storytelling medium was very much on Butler’s mind. Fortunately, Butler had inspiration and influence from his childhood for his next project. 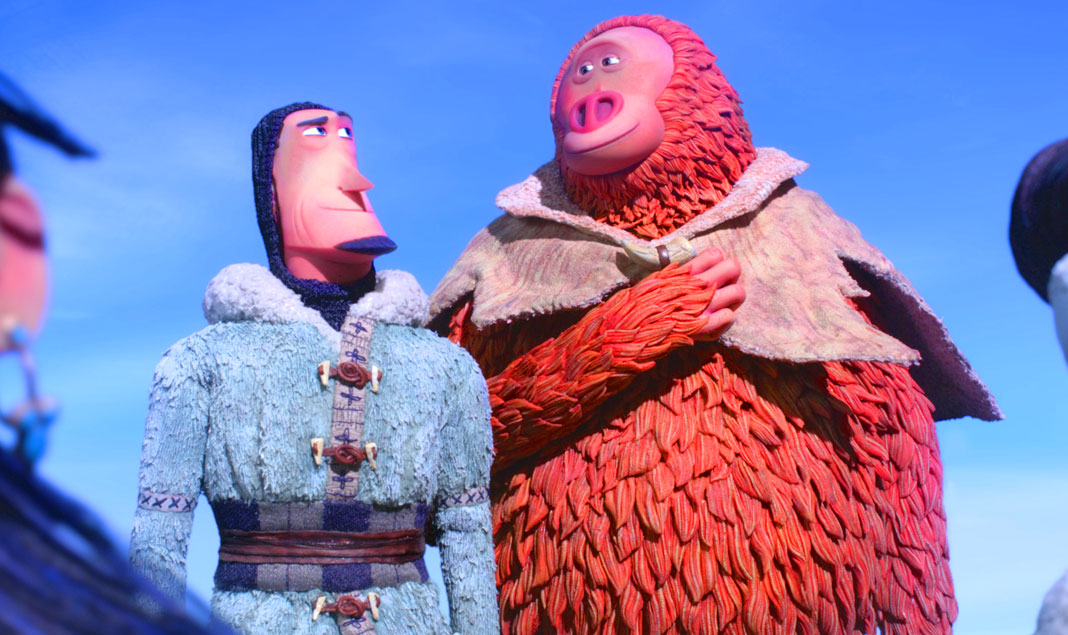 He said: “I grew up loving Indiana Jones and Star Wars and all that. And I always wanted to do a Raiders of the Lost Ark, but stop motion. Plus, with Sherlock Holmes and maybe a little bit of Mighty Joe Young. So, basically, you have this Victorian adventurer trying to find Big Foot and then actually helping Big Foot find his long lost family. So, it was a lot of elements from stuff that I grew up loving and it was all really a grab bag of that.”

The film follows Mr. Link (Zach Galifianakis), a Pacific Northwest creature who is lonely and tired of living in solitude. He takes it upon himself to reach out to Sir. Lionel Frost (Hugh Jackman), a fearless explorer who is hellbent on locating mysterious creatures all over the world much to the disdain of high London’s society. He tasks Sir. Lionel to help guide him on a journey to find what he hopes to be his family in the Himalayan mountains, where tales are told of a different sort of beast living in Shangri-La. With the additional help of adventurer Adelina Fortnight (Zoe Saldana), the trio travels all across the world and faces all sorts of obstacles on their quest. What follows is a fun, rollercoaster ride of an adventure that is meant to teach all that family can be found in the most unexpected of places.

“Link, as a character, it became pretty apparent quite quickly that he was going to be a cornerstone,” Butler explains. “I did this rough drawing many years ago. It was basically like a hairy avocado with legs and everyone who saw it loved it. So, I was like, this guy, there’s something here. And I think where we got to with Zach Galifianakis’s performance as well, I think he’s definitely the heart of the movie.” 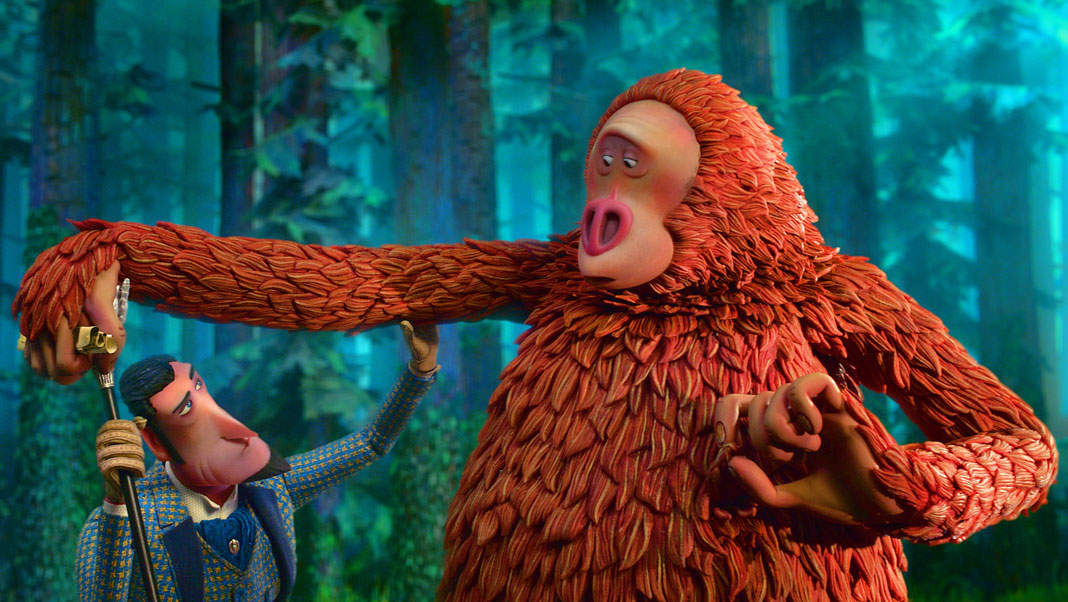 While the character Link is the heart of the film, puppets are truly the heart of LAIKA. Every puppet is made with care, creativity, and lots of love and precision. And the efforts of the puppet fabrication team never go unnoticed. Going into a film like this, which seems more scaled back compared to say the Other Mother from Coraline or the massive tentacle creature from Kubo and the Two Strings, one would think that the company would have checked off all of the items on their bucket list of challenges that come with fabricating a puppet. However, making a puppet that could emulate an eight-foot tall, furry creature is not as easy as one would expect, according to the creative lead of puppet fabrication, John Craney:

“Any kind of seasoned veteran puppet maker would say if you had asked them, ‘What’s the kind of worst case scenario if you were asked to fabricate a puppet?’ And they would probably say, ‘Well, a sort of large, kind of husky character covered in fur and hair and over a foot tall.’ And here we got Link ticking all of those boxes. So, he was quite a challenge. It was very exciting when he came through.”

The fabrication team had to deal with figuring out ways to construct the puppet while also keeping in mind the height and weight of the puppet. Making sure that the puppet translated well on camera and was manageable for the puppeteers and riggers to work with between each take was also something to take into consideration in the fabrication process. However, as we were all able to see in the sneak peek, there was no way we could clock the puppet. No, in fact, due to the amazing efforts of all involved, it was hard not to think that Mr. Link was actually a living, breathing Pacific Northwest creature onscreen.

United Artists Releasing will bring Missing Link to theaters nationwide on April 12, 2019. And stay tuned for more behind-the-scenes articles from our set visit at LAIKA.

Previous articleCameras Roll on Warner Bros. and Legendary’s Dune
Next articleFarscape is Heading to Amazon Prime Video This Week

Following the Ana de Armas photos from a few days ago, new No Time to Die posters have been released for some new and returning...
Read more
Movies

MGM Studios and United Artists Releasing have released new photos of Ana de Armas (Knives Out) as Paloma in No Time to Die, the anticipated 25th...
Read more
Movies

The No Time to Die Super Bowl Spot Changes Everything!

No Time to Die Contest Is Looking for Poster Designs

James Bond Returns in the No Time to Die Trailer!

United Artists Releasing has brought online the first No Time to Die trailer, which gives us a first look at the anticipated 25th James Bond movie....
Read more
Movies

No Time to Die Trailer Tease Shows the First Footage!

EON Productions has brought online a No Time to Die trailer tease, which shows the first footage from the anticipated 25th James Bond movie. The No...
Read more
Movies

It’s Game On in the New Jumanji: The Next Level Trailer!

We got to see the first trailer in July, and now Sony Pictures has brought online the new Jumanji: The Next Level trailer! You can also view...
Read more
Movies

Cursed Films Is Second-Biggest Premiere Ever on Shudder

Matt Reeves on How The Batman Acknowledges His Origins

While production for The Batman film continues to be shut down, Matt Reeves has been promoting his new Amazon Prime Video series Tales From the Loop....
Read more

HBO has released photos and the promo for Westworld Season 3 Episode 5, which is titled "Genre" and is described as follows: "Just say no." Directed by...
Read more
Load more