Will Smith Times Two in the Gemini Man Press Conference 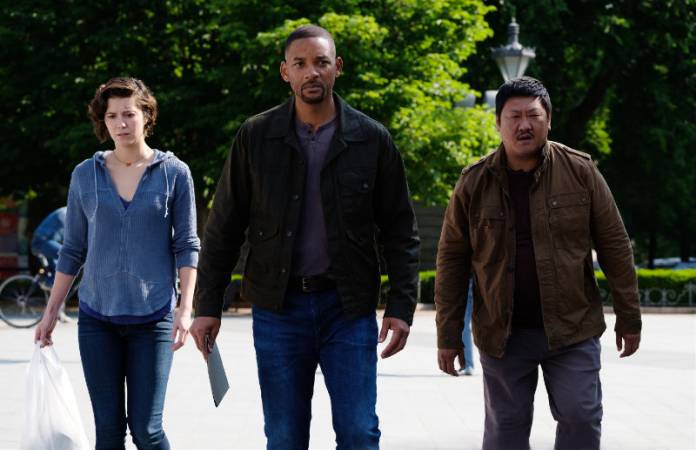 Gemini Man is an innovative action-thriller starring Will Smith (Disney’s Aladdin, Suicide Squad) as Henry Brogan, an elite assassin, who is suddenly targeted and pursued by a mysterious young operative that seemingly can predict his every move. You can check out the entire press conference in the video below, but here are some of the highlights.

In Gemini Man, Will Smith’s Henry is pulled back into assassin work when he’s trying to retire, and as you can see from the posters, he’s dealing with someone who looks exactly like him, twenty-something years ago. The film has been in different stages of development since the 1990s, but the technology has finally caught up with the story. Bruckheimer said, “Well it’s been at least 10 years that we’ve been working on this,” he began. “And the issue was the technology hadn’t caught up with the creativity of the writers. So we had to wait for [the effects] and Ang Lee to figure out how to get this movie made. We did some unsuccessful version of this in testing, and it looked pretty awful. So we kind of put it on the shelf until Ang said, ‘I have a whole new way of doing this, and I’m going to create something really special.’ And he certainly did.”

Lee spoke about taking on the challenge of the film. “Each time I make a movie I have that feeling, like I am the guy. There’s nobody else. This is my movie! You make that visceral connection… As soon as I hear ‘clone’ and ‘younger version,’ I felt I was old enough to deal with this stuff… all the philosophical stuff hit me first. Then [after] what kind of fun we’re going to have. And I know we’re getting into a digital world and how we create it. I experienced Hulk 20 years ago, and not too long ago, I experienced the tiger in Life of Pi, so in my head I know it’s within reach. But I know with human faces, you’re playing with fire… it’s pretty scary, but at the same time it’s pretty exciting. So I signed on.”

Smith spoke about the role, saying, “You know I just loved the philosophical idea that we all plant the seeds of our own destruction. We are our own worst enemies. We make choices and we make decisions in our lives that set things in motion that we can’t blame other people for. And the battle of trying to overcome our karma. And I just thought it was a really clever and creative way to say that we are the architects of our ultimate rise or fall. And it’s a big part of why I love science fiction, because you can put those things under really wild visual landscapes.” When he was asked about advice he’d give his younger self, Smith told the crowd that he’d actually take advice from his younger self, who he said was very ambitious. Of what he’s learned since his youth, he said that he tries to work for the good of the world with his decisions.

Of the technology, Smith said, “I’ve been doing a lot of interviews, and I don’t think people really understand the depth of what you guys have attempted and accomplished here. Junior (the other character he plays) is not de-aging. So it’s not my face, and then they smooth out my face to make it look younger. It’s a 100% digital human in the same way that the tiger in Life of Pi… is a 100% digital recreation of a tiger. This is not me de-aged. It’s a 100% digital interpretation of me. It’s a digital character. It’s the first digital human. So it’s actually a spectacular thing to be able to make people feel emotion in that way, capturing the youthful eyes. You can’t fake innocence. As a young actor it’s easier to play older. But older, it’s impossible to play younger. Once you know some stuff it’s in your eyes. It’s in your cells once you know some stuff… So their job in creating of a digital human was to be able to sell that innocence and that youth, and to be able to sell a digital human in that way, and I think you guys did spectacular work.”

Owens, who plays a man who’s working with some questionable technology, said, “I think it’s like a brilliant coming together of something that’s full of action, it’s a great premise, it’s a huge movie, but it’s also about characters and drama. And it’s very intimate and personal. And I think Mr. Ang Lee is the ultimate director for a movie like this, because he’s on top of the technology, he’s on top of what huge drama is, but he’s also incredibly artistic, and specific, and detailed. So I was just hugely excited when I got the script.”

Bill Westinhofer talked about the technology. “We did look at what had been done in the past, and where the technology was. There had been pretty close attempts in Rogue One and Blade Runner a year before. And we thought that things had matured, and it was very similar to what we did in Life of Pi. And he asked, ‘Can we do for a human what we did for the tiger?’ So we looked and said that technology’s close enough that if we put the same determination into it, we thought we’d feel confident we could do that… There was some fear involved, but we felt confident the technology was close enough, that with raw determination and the incredible skill and talent of the people at Weta that we can do this.”

Check out the rest of what they said about Gemini Man in the video below and let us know what you think!

Previous articleTry Out Terminator T-800 When Mortal Kombat 11 Is Free This Weekend!
Next articleDare to Go Back in the Official Doctor Sleep Poster

Neve Campbell Officially Back as Sidney Prescott in Scream

Courteney Cox Returning as Gale Weathers for the Next Scream Movie

Courteney Cox (Upcoming Shining Vale, Friends) has confirmed on her Instagram account that she will be returning as news reporter and author...
Read more
Movies

Following the Tenet and Conjuring 3 date changes and all of the Disney changes today, Paramount Pictures and Sony Pictures have now...
Read more
Movies

The Walt Disney Studios announced today that the Mulan release date has been moved back from July 24 to August 21, 2020....
Read more
Streaming

ViacomCBS today announced the latest feature film in the SpongeBob franchise, The SpongeBob Movie: Sponge on the Run, will debut digitally in...
Read more
Movies

After shutting down filming earlier this year, the next two Mission: Impossible movies are set to restart filming in September, and the...
Read more

Empire Magazine has posted some new The Suicide Squad photos from its December 2020 issue, which goes on sale Thursday, October 29. You can...
Read more

Netflix announced today that the fourth and final part of Chilling Adventures of Sabrina will launch on the streaming service Thursday, December...
Read more
Load more