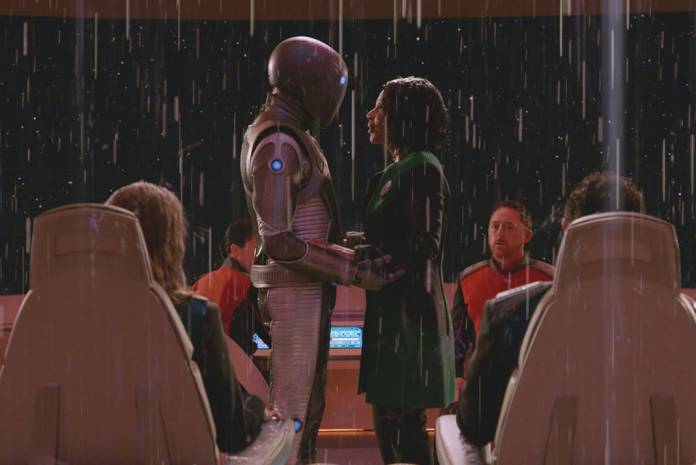 I’m not one who goes for Valentine’s Day. So, if you are expecting a list of favorite Valentine episodes or cutest superhero couples, you can count me out. During the month of February, I’m more likely to roll my eyes or try not to gag when confronted with cloying television romance. I’ll stick to sci-fi, superheroes, action, and adventure, thank you. And yet… here I am on Valentine’s Day writing about a television episode that managed to warm even my cold, cold heart, sighing, ‘Awwww…..” What’s more, the unlikely source of these newfound warm, fuzzy feelings is none other than writer/director Seth MacFarlane (Family Guy, Ted, A Million Ways to Die in the West.)

In The Orville Episode 2.6, which is entitled “A Happy Refrain” and premiered on January 31, MacFarlane brings us a familiar science fiction story of human/robot love in outer space. In this episode, Lieutenant Commander, Chief Medical Officer, and single mom, Claire Finn (Penny Johnson Jerald) explores her feelings for Kaylon Science and Engineering Officer, and robot, Isaac (Mark Jackson.) These feelings are not new – Claire’s dislike of the intellectually superior and unfeeling Isaac turned to fondness during the Season 1 episode “Into the Fold,” where Isaac helped protect Claire’s sons when they become stranded on a hostile moon. Isaac has been a great help to Claire with her sons, including helping to teach her youngest son Ty, how to play the piano.

“A Happy Refrain” starts with Isaac bringing Claire a banana when summoned to her office to help edit a medical paper she is working on. Isaac explains that he noticed that she gets grumpy when she has not eaten after a long period of time. He also notices that Claire has “changed the configuration of her hair,” and asks awkward robot questions to ascertain why. Having someone pay that much attention to her must feel flattering, and we can see the attraction growing on Claire’s face even before she runs to Commanding Officer Kelly (Adrianne Palicki) to discuss her feelings. 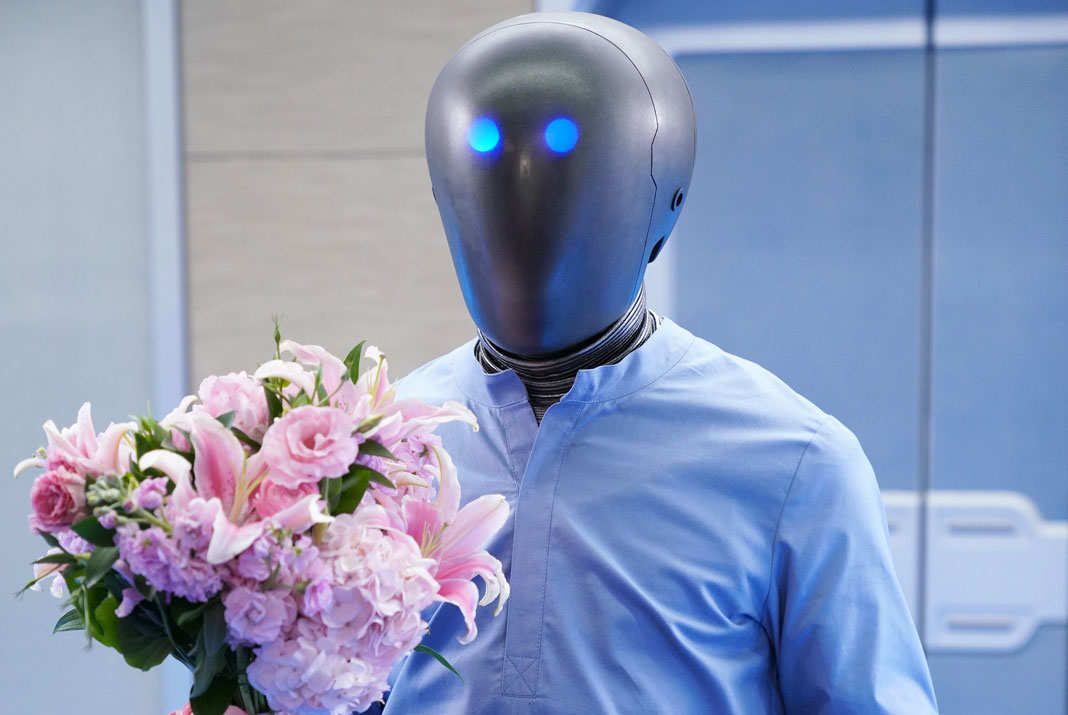 We’ve all seen the Isaac type on science fiction shows before. I’ve always had a soft spot for such characters. First there was the uber-logical Vulcan Spock (Leonard Nimoy) from the original Star Trek, then there was Data (Brent Spiner), the android who wanted to grow up to be a real boy on Star Trek: The Next Generation. I even liked Spock (Zachary Quinto) from the newer Star Trek movie franchise, who despite his half Vulcan identity, is romantically involved with Lt. Uhura (Zoe Saldana.) Actor Mark Jackson brings the same kind of awkward/cute to the Orville in his attempts to learn the intricacies of human behavior.

Claire asks Isaac out on a date and things take off from there. They discuss getting to know things about each other – like the fact that Claire misses Earth’s rain storms while out in space. But Isaac has done his research into Claire’s personnel files and knows too much about her, taking the spontaneity out of the date. Claire is not so sure about the relationship at the end. Isaac, being Isaac, is not willing to give up until he successfully navigates and learns everything he can about romantic relationships.

I love everything that writer Seth MacFarlane brings to The Orvile episode. There is music, including a full orchestral performance of the song “Singing in the Rain”; there is comedy, as in Isaac’s attempts to impress Claire by donning clothes for their date, and the 6th grade childishness of the rest of the crew gossiping about this momentous event; there is sex – yes, Isaac uses the ships simulator to assume the body of a human (the real actor Mark Jackson) – and the two do the deed, with Claire eventually marveling at Isaac’s prowess and willingness to please; and there is crude humor as in a tighty whities and wife-beater clad robot lazily lounging on a couch, demanding his meal in an attempt to get Claire to end the relationship. 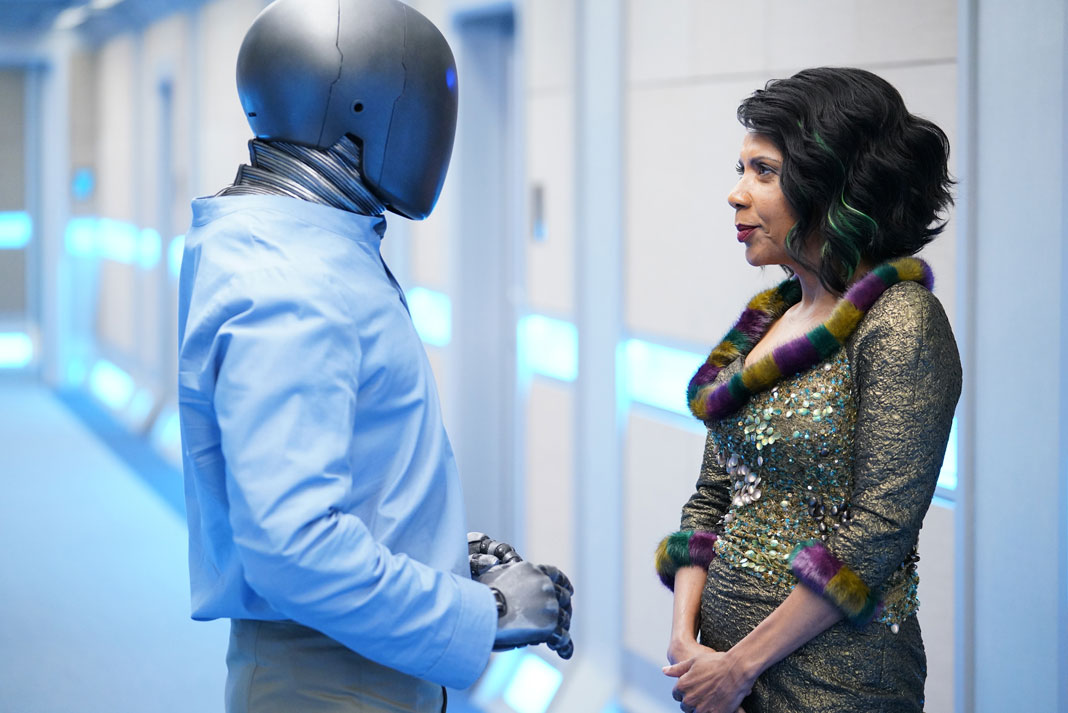 To add to all of this, there is a happy ending that just melted my heart. Claire tells Isaac to stay away from her and her children. Isaac attempts to delete all traces of Claire from his data banks and ends up making a mistake in a calculation for the first time while on the bridge. He goes off to perform a diagnostic check on his system, and Captain Mercer (Seth MacFarlane) follows. It turns out the mistake came from Isaac’s attempts to delete Claire from his memory and Mercer explains to Isaac that Claire got under his skin and he needs to be creative to find a way to keep her in his life.

And get creative he does. Claire shows up on the bridge reporting to Captain Mercer, who says he did not summon her. No one knows why she was called there until Isaac says he was the one who called her. He hits a button on his console and the bridge is filled with the song “Singing in the Rain” from their first date, and he makes it rain on everyone in the bridge. Isaac explains to Claire that he is better with her than without her and has found that relationships are better when both people have a long-term commitment to each other. Everyone on the bridge is getting wet, and Claire kisses Isaac to the tune of the happy refrain of the song.

The episode concludes with Helmsman Gordon Malloy (Scott Grimes) declaring that they have the weirdest ship in the universe. I thought it was a perfect ending and I was left with a tear in my eye and a smile on my lips. Happy Valentine’s Day!