Set in a beautiful seaside town on the Italian Riviera, Pixar’s Luca is a coming-of-age story about one young boy experiencing an unforgettable summer filled with gelato, pasta and endless scooter rides.

Pixar’s Luca was inspired, according to Casarosa, by the work of Hayao Miyazaki. The footage we saw has the feel of a 1950s/1960s small Italian village, and tells the story of Luca, a young boy who is also a sea creature.

Luca’s parents just don’t get why he keeps visiting the surface world and his new friend Alberto, and threaten to send him to visit relatives in the deep sea. The thing is, Luca adores Alberto, and the freedom and knowledge his fellow sea creature has about the surface.

Enrico Casarosa spoke about the inspiration for Luca, saying, “I was born in Genoa, which is this poor town right on the Riviera. And I was a shy kid, a little bit sheltered by my family. And when I met my best friend at 11, my world opened up. He was a bit of a troublemaker; he didn’t have a whole lot of supervision.

“And so, in those special kind of summers when you’re growing up and kind of finding yourself, I was kind of following him and getting dragged into troubles. And it really made me think about how much we find ourselves with our friendships, or how much friendships help us find a bit who we want to be. And those days of summer on this wonderful coastline-it’s a very specific coastline. It’s rocky, there’s, like, mountains and sea.

“Most towns are really hanging on for dear life on rocks, and then there’s a lot of cliffs.  So, I kept on thinking about the literal and the metaphor of someone who pushes you off a cliff.  And there was a lot of diving into these beautiful waters when I was a kid.”

Andrea Warren said they thought a lot about the messages of the film. She said, “For me, that notion of the meaning of friendship really resonated. I think there are a few really beautiful themes in the film. One being sort of ‘Silencio Bruno,’ and how we all have these inner critics – and how you sort of overcome that sense of doubt… I hope that some of these messages really reach the audiences and especially reach kids.”

Jacob Tremblay spoke about Luca’s reluctance to visit the human world he’s so fascinated with. “I think it’s something to do with his curiosity, and he wants to explore what’s off-limits, even if the humans – they’re like, sea monsters and humans are cool with each other. But yeah, I think that his parents are very strict and they want to protect him.”

Jack Dylan Grazer told us about Alberto, saying, “I think the aspect of curiosity is across both of them, but Alberto, he’s got no restrictions, and he’s so eager, and he’s so yearning to explore and fulfill all these fantasies and curiosities that he has. I think that he’s a huge part in inspiriting Luca to go to Portorosso to get the Vespa… I think it’s one of the most crucial things you could ever learn in your life. It’s just like the elimination of doubt. I got rid of my Bruno [makes noise] eons ago. I haven’t had a Bruno in years.”

He explained that “Silencio Bruno” is what you say to that inner voice telling you not to take a risk. “I have always been a really impulsive decision maker, like I don’t like to think about that there’s two ways that things could go. It’s terrible or it could be wonderful, and I choose not to think long enough about the thing to think about how terrible it could be, and it might end up being a terrible decision, but I’m hoping for wonderful.”

Emma Berman is making her film debut in Luca. She talked about Giulia and who she is. “She’s a very strong character. She’s determined and she’s hardworking and genuine and intense, but she’s also awkward and quirky and goofy. I had a really fun time playing her because I relate to her in a lot of ways. That we’re both passionate about what we do, and we’re also very excited and joyful people.”

Maya Rudolph said her character was a serious mom. “She’s not messing around, and that, to me, instantly in this movie’s case, just equals love – that protection, that strong discipline is love, and wanting to raise her family right.

“And there’s a certain way that Luca’s family is meant to do things, and she wants to raise her son the correct way, but what you come to learn about her is that she also is really protecting him from what she already knows to be dangerous in the world, and just like any parent, she’s a fierce, fierce protector, but I think she gets all the passes. Because, you know she loves her son. There’s no question.

“It’s already in the formula,” she continued. “It’s just a matter of, ‘You listen to your Mama, and you do what you’re supposed to do.’ And I think deep down, she knows her son is going to probably explore, but she’s just trying to protect him because, I mean, it’s the scariest thing in the world to let your babies run out into the world and explore. And even though you know they need to, it’s terrifying, you know? I think all parents go through it at some point.”

Jim Gaffigan‘s Lorenzo is a different kind of parent. He explained, “I think Lorenzo is well-intended, but definitely distracted. And I think that most parenting partnerships, it’s a negotiation on how to raise a child. I kind of played Lorenzo – I mean, I’m kind of overwhelmed, hopefully well-intended as a parent, so I kind of brought that in.”

The voice work was recorded during the pandemic, so the team had to get creative. Warren said, “One of my biggest concerns was how are we going to record everybody. So I really have to thank this group and everybody at Pixar who sorted it out, because it involved sending iPads and microphones and everybody testing out spaces in their homes where the sound would be baffled.”

Jack Dylan Grazer had to record in his mother’s closet and kept hitting the hangers with his arms as he gestured. Warren also said that sometimes Zoom would cut out when they did it that way, and “…somebody’s just performed something, and you’re like, I bet it’s good. I don’t know. So… it was definitely tricky.”

Grazer said, “Being in my mom’s closet for a year, it was definitely a stretch for me, a challenge for me as an actor, and as just a human being. It got hot in there, and I bet my neighbors were really freaked out about the amount of screaming that was going on from my house!”

Casarosa also told everyone about the characters. “For Luca, the sense of curiosity and him wanting to take in the world was the first, most important thing for me, and I stole it from myself because this kid in ‘La Luna,’ the short I made, had a similar [feeling], wanting to take the world in,” he said, talking about Luca’s big “lollipop head” and big eyes.

He added, “With Alberto, right when we designed Alberto as a sea monster, we looked at more [of a] fast swimmer, sharper lines, so he’s actually someone whose tail is inspired more by a bluefin tuna and – how do we make him a little bit more fierce and a little bit sharper. So we really think of our shape language and then we looked at all these wonderful maps that we could bring into the sea monster, some of these cues and then we kept on drawing them, and I love drawing.” 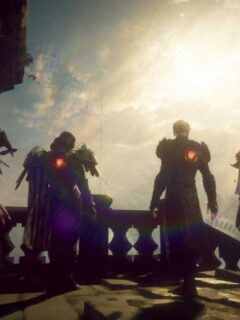 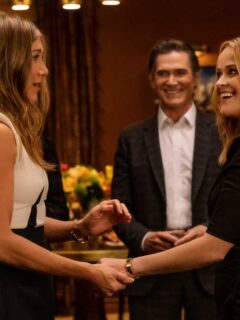 Next
The Morning Show Season 2 Teaser and Premiere Date
Click here to cancel reply.
Disclaimer: This post may contain affiliate links through which we earn a commission if you decide to make a purchase, at no cost to you. As an Amazon Associate, we earn from qualifying purchases.