It’s that time of year again! Your entire week is going to be spent running to the mall and avoiding kids with sticky holiday candy, or attending family gatherings where you’ll be asked about your love life or why you aren’t further on in your career. You know, it might not be a bad idea to curl up on the couch with some hot cocoa and watch some geeky Christmas TV episodes. We can totally help you out with that!

Legion of Leia and Vital Thrills have come up with a list of our all-time favorites! 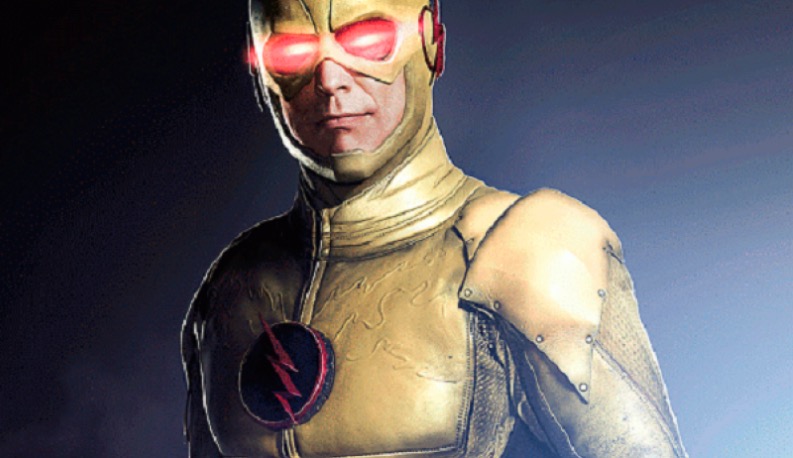 The Flash – “The Man in the Yellow Suit”

My favorite Christmas episode of The Flash is “The Man in the Yellow Suit.” It was the mid-season finale of Season 1 and had so many elements that I’ve come to love about this show. We had touching family moments (Barry and his dad, Barry and Joe); relationship issues (Caitlin learning that Ronnie is still alive, and Barry finally telling Iris how he feels about her); and best of all — real speedster moments with the Flash and Reverse-Flash. They did such a fantastic job with having two speedsters on the screen and the reveal that Harrison Wells was in reality the Reverse Flash was perfect. Can’t get enough Tom Cavanagh on screen for me and his version of Reverse-Flash is my favorite.  And if that is not enough, we get our first foreshadowing of “Flashpoint” with the discovery that there were two speedsters present at Nora Allen’s death, and also the upcoming Crisis on Infinite Earths storyline with the introduction of tachyon particles that are a key element in The Flash’s disappearance. The episode felt like a present to viewers and kept us all excited for The Flash’s return after the break. 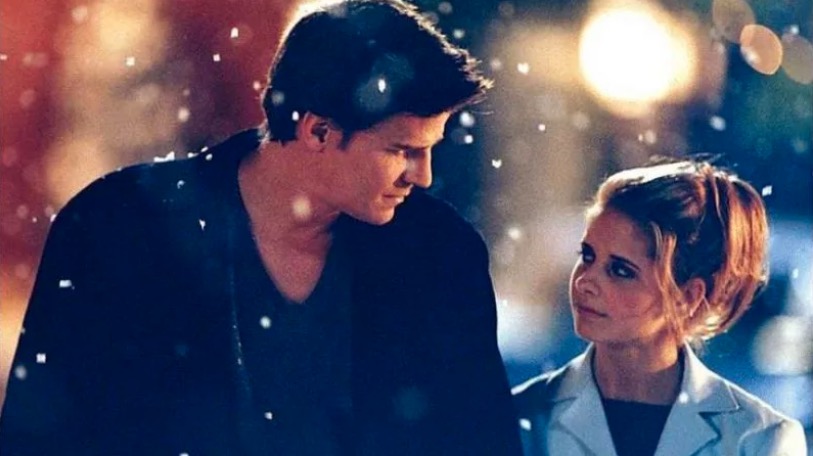 This one happened during Season 3 after the death of Jenny (sniff) and when Buffy and Angel are sort of on the outs. Faith is holed up in a hotel, Oz and Willow are all awkward and things aren’t well in the land of Sunnydale. Angel is being haunted by The First and having visions of his victims, and he and Buffy are in each other’s heads. It’s hard to beat this episode of Buffy as it contains that Buffy/Angel tension we all love so much, a lovely snowfall in Sunnydale and Angelus and his godawful Irish accent. Seriously, was there no dialect coach or was David Boreanaz just that terrible? “Amends” is still early in the series run and is all angsty and lovely in its 1990-ness. Ah, days of yore. 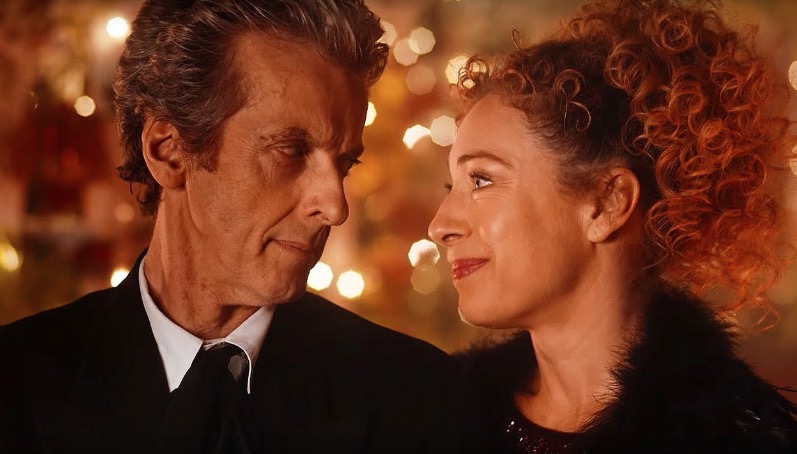 Doctor Who – “The Husbands of River Song”

River Song is one of my favorite New Who characters, I’ve always enjoyed everything about her and her story. The Husbands of River Song brings the story full circle and is one of the few TV episodes that brings a tear to my eye. While I sincerely hope we haven’t seen the last of this iconic character, her story coming full circle leaves me satisfied. I will always hope for more Song, but if that has to be the end then so be it. We’re all just stories in the end and River made it a good one. 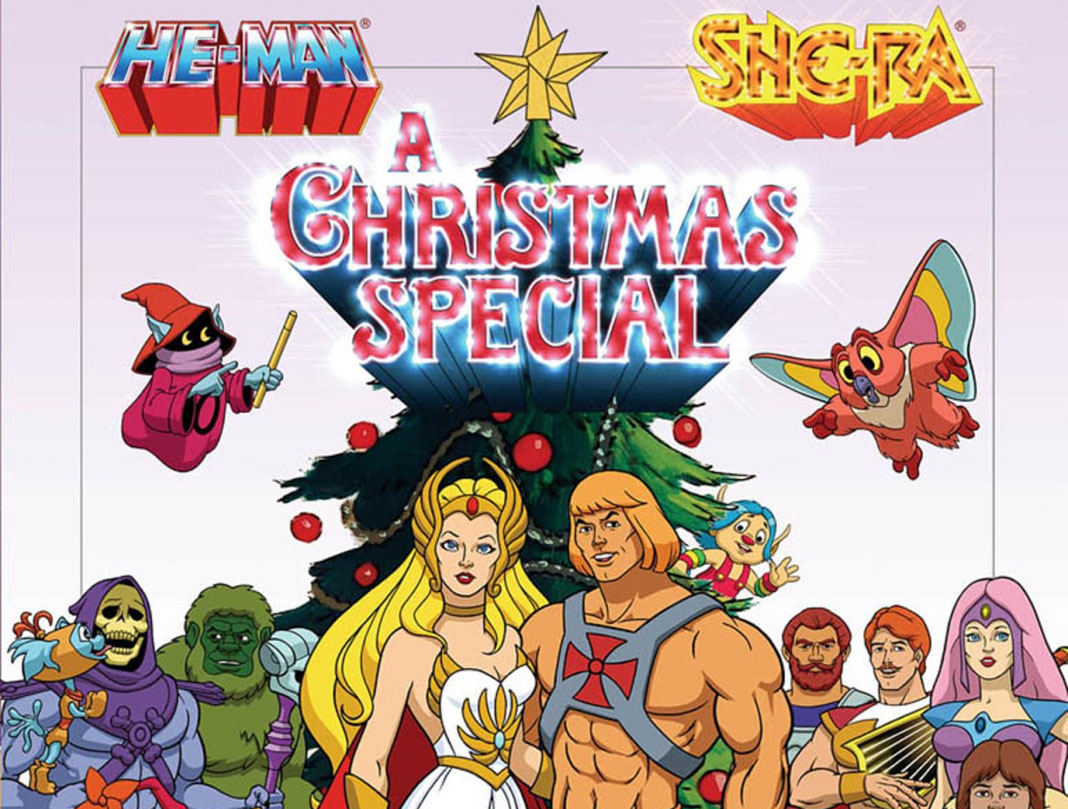 “He-Man and She-Ra: A Christmas Special”

If you want the true meaning of Christmas look no further than the 1985 “He-Man & She-Ra: A Christmas Special.” It’s meant to show off the heroics of our favorite male and female heroes, but ironically what it really does is show the softer side of the usually scary villain Skeletor.

The Masters of the Universe special shows what the holiday season looks like in the magical worlds of Eternia and Etheria. The tale begins with the heroes of Eternia decorating the palace for Prince Adam and Princess Adora’s birthday.

But in a wild plot twist, floating magician Orko accidentally sets off a spy rocket with himself inside and winds up on Earth during the Christmas winter. He makes friends with two human children who got lost in the forest while chopping down their own Christmas tree. They share their own stories of Christmas goodwill with Orko.

They somehow return with Eternia with a newfound appreciation of the holiday spirit, which ends up attracting the unwelcome attention Skeletor. Confused yet?

I don’t want to give too many spoilers away, but the highlight of the special isn’t He-Man or She-Ra, or even Orko and the human kids. It’s Skeletor who warms up to a Manchine puppy who licks his face a lot. No really. Which teaches us all a valuable lesson. When the most evil entity in the universe threatens to destroy your world, give him a puppy. 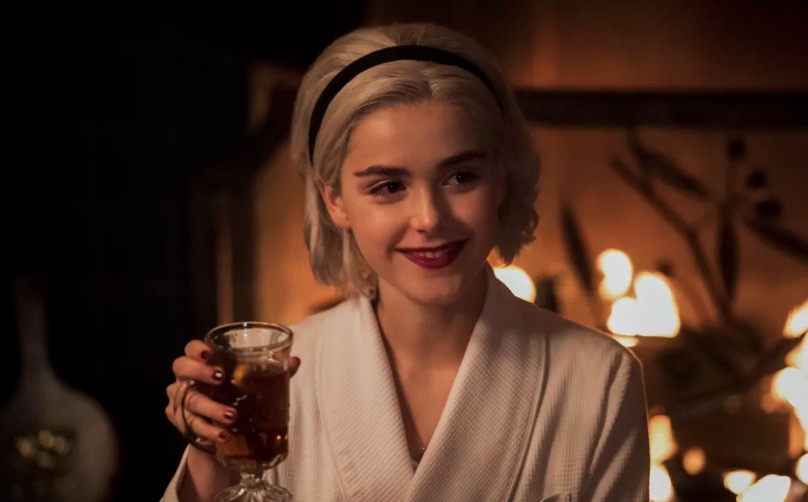 Given how much this special is trending, I selected Chilling Adventures of Sabrina “Chapter Eleven: A Midwinter’s Tale.” One theme that really stood out in this episode was the tackling of family. For many people, the Christmas holiday season can be very painful, especially for those who have lost loved ones. This particular episode of CAOS deals with that particular topic through Sabrina as she dwells on another Christmas without her mother. She’d give anything to celebrate just one Christmas with her mother. And I think that desire is universal for anyone who has lost a loved one. Regardless of how cluttered this episode felt, what helps make this Christmas episode standout I think is how the writers’ focus on Sabrina and her desire to connect with her deceased mother. The theme of family and the loss of family members around the holidays is a tough one and the writers succeed in tackling those themes. 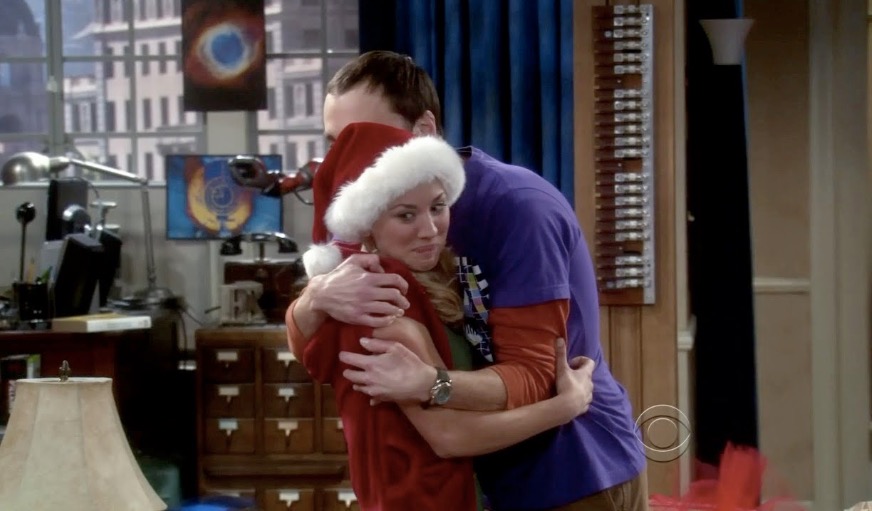 I love this episode of Big Bang Theory because it serves as a powerful reminder of what Christmas is about. While Sheldon attempts to calculate the numerical value of the appropriate gift to give Penny, Penny gives him the ultimate Christmas present – a napkin signed by Sheldon’s hero, Leonard Nimoy. Realizing the heartwarming significance of her present, Sheldon proceeds to give Penny all the gifts he purchased, along with a hug, something he is typically uncomfortable with. This touching moment brought tears to my eyes, as a reminder that there is no monetary value that can replace a gift given from one’s heart. 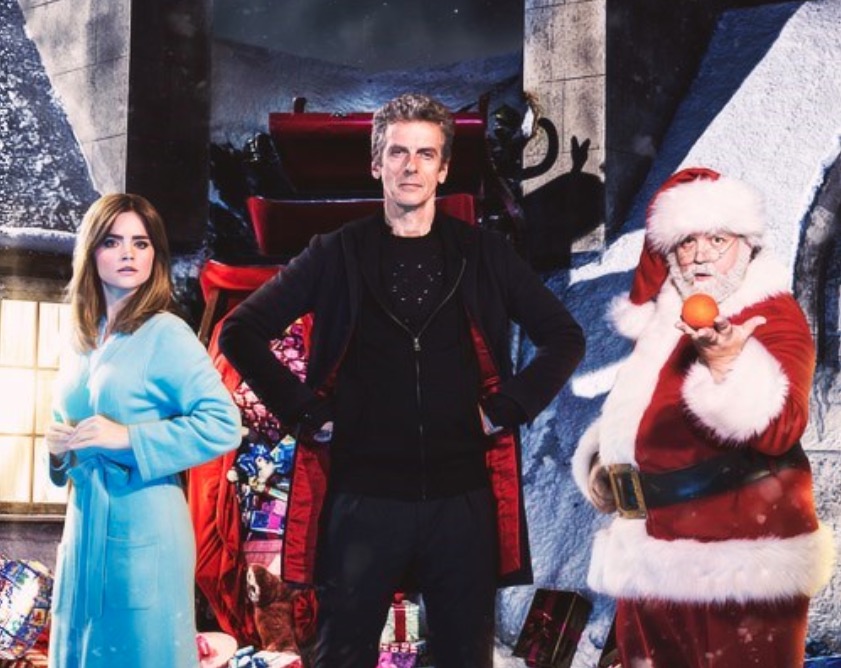 What’s not to love? You have Nick Frost as Santa in a snark fest with The Doctor, an Alien reference regarding facehuggers followed by the Doctor saying “There’s a horror movie called Alien? That’s really offensive. No wonder everyone keeps invading you.” Classic. And I loved that we got to see Clara in her old age with the Doctor while discussing feeling of what could/should have been. I love that we have a dream within a dream twist. And of course, Santa saving the day. Underneath all of the craziness going on in the episode is a very real message about regret. Clara regrets not getting to spend more time and be more open with Danny Pink. The Doctor regrets not spending time with Clara when he thinks a significant time has passed and she’s at her end. The phrase “Every Christmas is last Christmas” sticks with me because it’s a very real sentiment: for some people, and a lot of times we never know who, it is their last Christmas. Always live life to its fullest and tell your loved ones how you feel. Make it count. This episode spoke to me on that level and was just wonderful. Plus I adore Capaldi. 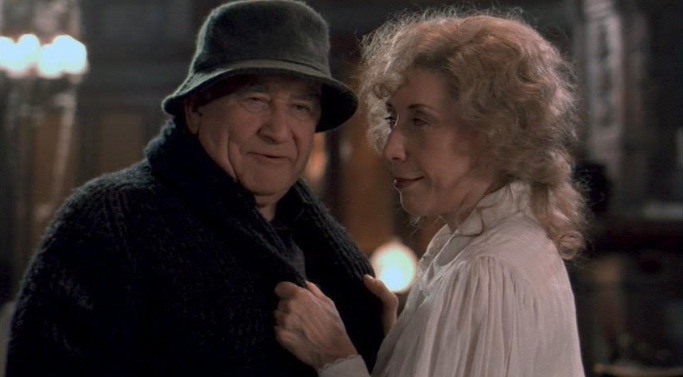 The X-Files – “How the Ghosts Stole Christmas”

It’s all about spreading despair and loneliness for Lydia and Maurice, two long-time lovers looking for a little company on Christmas. Also, they’re ghosts. Played by Lily Tomlin and Ed Asner, these two get only one night a year to haunt their home and hopefully trick two people into a nice, cozy, double homicide. Of course Mulder drags Scully out to the fog covered property on Christmas Eve. Of course, she doesn’t want to be there. Their investigation quickly becomes one of the best haunting episodes of all T.V. time with misdirection, spooky sound effects, and high-level trickery. This episode is beautiful filled with camera work, colors, and the perfect score to give you all the warm horror nostalgia feels. Possibly the best part though, is when Mulder and Scully surprise each other with presents and they tear into them like little kids. Happy, ghost hunting, special agent little kids. 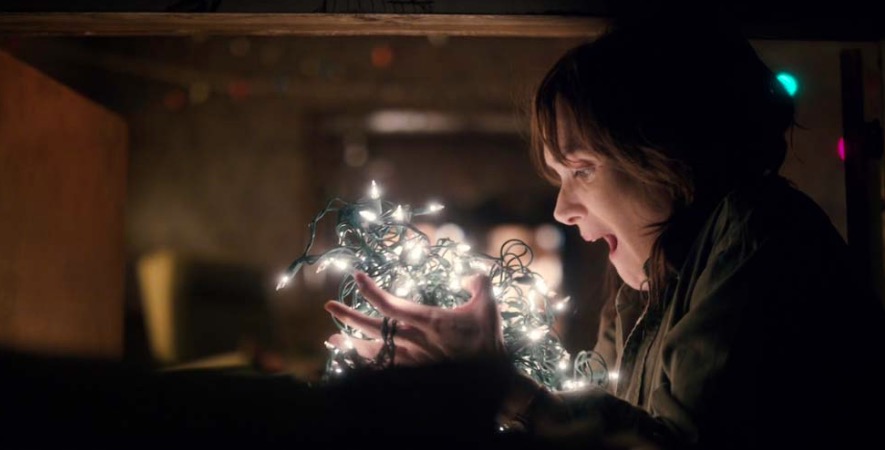 Stranger Things – “Holly Jolly”
Though it isn’t blatantly Christmas centered, “Holly, Jolly” is easily my favorite episode of Stranger Things Season 1. This episode serves as the turning point for the gang in their search for Will, but Joyce (Winona Ryder) gives us the most iconic use of Christmas lights ever: Using them to communicate with her missing son in a parallel dimension. I still get chills every time I watch her hug the ball of lights, knowing that Will is still out there. I see it as Joyce’s first moment of clarity in the fight to find Will. She’s really not crazy. These lights are blinking. As she scribbles the alphabet across the wall and strings the lights, I kept thinking, “You know, maybe this won’t be a terrible Christmas for the Byers family after all. ” That was, until the lights flashed “R-U-N.”

Also, what do you think they did with all those lights?

So, what are your favorite geeky Christmas TV episodes? Let us know in the comments!