Dora and the Lost City of Gold Review

Home » Dora and the Lost City of Gold Review

Surely the most dreaded words in all of feature film development must be “it needs a new direction.” [Followed closely by “I have a few notes”]. Not that searching for a new direction is bad, some fantastic films have come from creatives throwing out what came before and in the process re-discovering an original truth. Nor does slavish devotion to previous iterations equate to quality or success. But the difference between the search for a necessary new take and unnecessary one seems arbitrary, and fails more often than it succeeds. Mostly it seems to stem from a lack of connection between filmmakers and producers and the story. Sometimes this means changing the creatives, sometimes it means changing the story until something within the vague of universe of ‘I need more’ clicks for the people involved… and often with mixed results for everyone else.

Take for instance the case of an afternoon cartoon icon, a precocious pre-tween who teaches elementary Spanish language and culture to preschoolers amid light, fun, kiddy adventures. It’s silly, it’s goofy, it has talking animals and inanimate objects and fourth-wall breaking and spontaneous singing. And it is beloved by millions who both grew up on it and are growing up on it now. So naturally the feature film version has nothing to do with any of that, sending a now teen Dora (Isabela Moner) into the brutal social jungle of high school only to immediately send her to the brutal jungle of the jungle. Her parents have disappeared searching for the famous city of Parapata in the Amazon and Dora and her new high school friends must find them and deal with the ruthless band of mercenaries searching for the city themselves.

Dora and the Lost City of Gold has the overwhelming stench of being made by people who felt silly doing it, and are trying desperately to unsillify it. The classic elements of the old show are introduced and then dashed off as young Dora’s imaginative child play alongside her cousin Diego and the family monkey, Boots. Instead of focusing on that most well-known version of the characters, Dora skips past any familiar elements and jumps forward 10 years to introduce the 16-year-old version of the character (Moner). With her parents heading off into the jungle, Dora is finally being forced — Mean Girls style — to leave the jungle and move to Los Angeles to start high school alongside her now grown, disaffected and perma-scowled cousin (Jeff Wahlberg).

Fortunately, Dora does not become enthralled in a contest-of-wills with a suite of popular rich girls. Moner’s casting is the best choice Dora ever makes, completely committing to Dora’s essential Dora-ness while refusing to wink at it or act like she’s not 16. She’s earnest, she’s caring, she’s positive, she’s adventurous, and she is never for one moment false (textually or metatextually). No one else can say that (though mostly that’s not the actor’s fault) and the fact that EVERYONE’s scenes are next to Moner makes the gap even more obvious. Actually, that’s not fair. Eugenio Derbez is so good at the specific kind of comedy the film he’s in requires, and has so much screen charisma, he is able to make his scenes work by sheer force of will. But everyone else is caught in the grip of the screenplay. 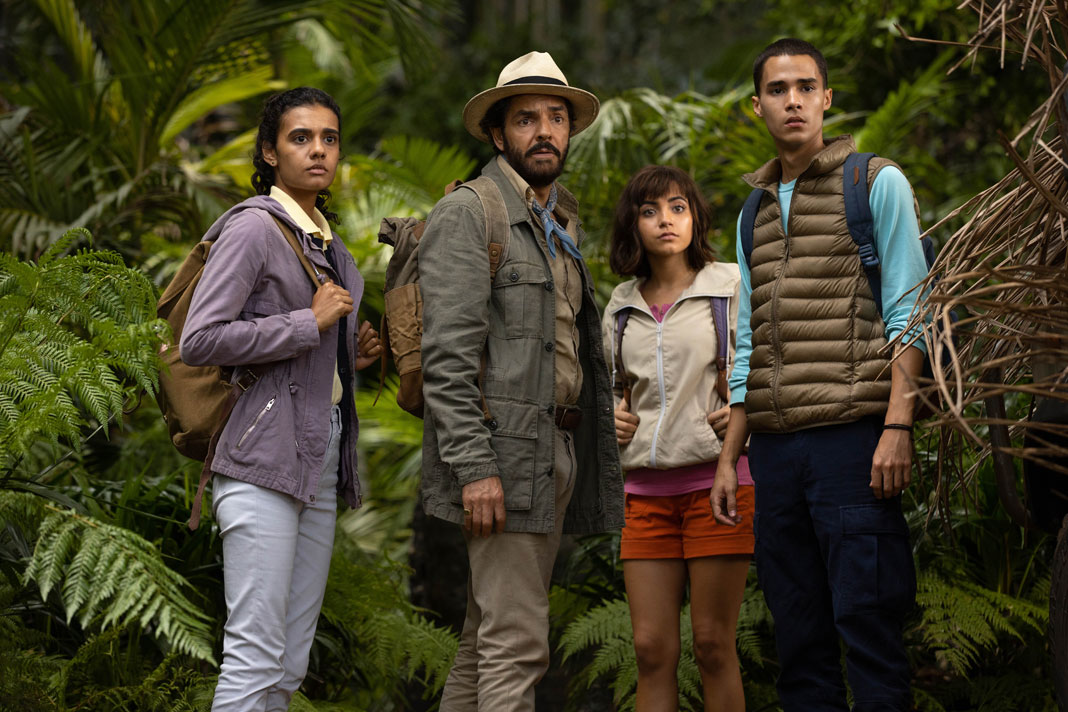 The script by Nicholas Stoller and Matthew Robson is in a constant search for a direction, bringing out every Hollywood staple from ‘you just need to believe in yourself’ to ‘high school is the worst social experience you will ever have.’ When Dora isn’t rolling around in high school comedy clichés so old their great-great-grandclichés have graduated from high school, it’s attempting quasi-edgy, slick jokes which scream ‘I’m slightly ashamed to be working on this.’ People sing about digging pooh-holes and freak out when Boots starts talking but take a walking, talking fox in a mask in stride beyond wondering why he wears a mask. No trope in the original show goes un-lampshaded, and as such there is little anyone who grew up with the show will find familiar about the live-action version. But it can’t escape from its roots enough to actually approach the teenagers it is about, either.

Director James Bobin (Alice Through the Looking Glass) knows his way around both adventure and comedy and he makes the most out of a fairly tight budget. Dora looks far better than it should with some excellent cinematography from Javier Aguirresarobe, who creates exactly the ‘Indiana Jones for Kids’ aesthetic the rest of the film aims for and misses. The supporting adults, especially Michael Peña and Eva Longoria as Dora’s long-suffering parents, make the most of the comedy moments while their scenes with Moner are among the few that feel like the film everyone was trying to make. As committed as Moner is to what she’s doing, though, no one else seems on the same wavelength. Dora and the Lost City of Gold is not edgy, is not funny enough and does not seem to be really about Dora. It’s a film which feels more about how concerned the people who made were with what their peers would think of the job, when they should have been thinking of their audience.

DORA AND THE LOST CITY OF GOLD REVIEW RATING: 5/10

Next
Mr. Iglesias Season 2 Ordered by Netflix
Click here to cancel reply.
Disclaimer: This post may contain affiliate links through which we earn a commission if you decide to make a purchase, at no cost to you. As an Amazon Associate, we earn from qualifying purchases.