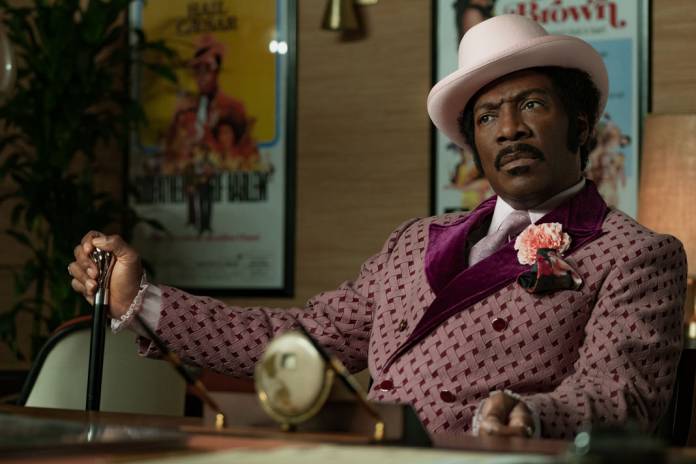 Eddie Murphy is back.

The best Eddie Murphy movies are those where it feels like he has something to prove. It’s been a few years since we’ve had a completely engaged Eddie. His strongest films have always been those when Eddie has a little glint in his eye, right before he lays his cards on the table and knocks all the rest of the players out. Films like Coming to America (until now, probably his best film), 48 Hours, or Beverly Hills Cop feel almost dangerous, and when he’s firing on all cylinders, especially in the 1980s, there wasn’t anyone on the planet that could come close to him. Younger moviegoers really have no idea just how big a deal Eddie Murphy was. Like Michael Jordan in his day, Eddie Murphy could take on all comers and leave them in the dust. Sometimes, he would get lost in the wilderness, but even then you can still see the caged tiger within, just waiting to be set loose.

Enough with the metaphors – Dolemite Is My Name is the best Eddie Murphy performance in, perhaps, ever. It’s not simply a comedic showcase, either – as Rudy Ray Moore, Murphy is playing a character full of deep passions and a hunger that probably felt very familiar to him. From his first moments, we can’t take our eyes off him, even as we see Moore struggle to get his work heard by the DJ in the record store where he works. Here is a man who will never be satisfied with the lot life has given him, and if he has to kick and scream and fight to get what he feels he deserves, then he will do so. Rudy does not, cannot, will not quit. But Rudy also recognizes that a rising tide lifts all boats, and if he can bring his friends who have supported him over the years along to help him out, then so be it.

As a singer, Rudy Ray Moore’s talent is questionable, but when he hears a proto-rap poem from one of the local homeless living in the area, Rudy thinks there could be a way to incorporate it into a comedy act. When Rudy cracks it with his own rhymes, he discovers that not only is he funny, but that he can craft it into an actual act. As his act becomes more successful, he brings in additional talent such as Lady Reed (Da’Vine Joy Randolph) as a partner on the road. Soon Rudy is selling records hand over fist, and gets the attention of a studio.

There is an electric moment, as Rudy Ray Moore stands behind a microphone, and we realize, even though he is playing a character, that we are getting to see Eddie Murphy perform stand-up comedy again, and it literally sent shivers up my spine. This is something that so many of us have wanted to see in almost 30 years, and it’s a thrilling, powerful moment, and not just in the context of the scene. It’s where Eddie Murphy belongs, and even though it’s an acting performance, it’s as exciting as seeing Murphy back in his heyday.

But Rudy wants more. After seeing a movie, Rudy decides that there is a larger audience that isn’t being served out there. So, dragging his friends along, and uses his charm to bring in playwright Jerry Jones (Keegan Michael-Key), and even professional actor D’Urville Martin (Wesley Snipes) to direct. He’s questioned every step of the way, by friends, by executives, by theater owners, but Rudy Ray Moore is tenacious, optimistic, and confident. The result is Dolemite, one of the most popular films of its day, and a cult classic. Dolemite Is My Name explores Rudy Ray Moore’s legacy, which goes deeper than many may realize – Moore is one of the integral inspirations of hip-hop, gangster rap, and changed comedy forever. Hell, you don’t get to Eddie Murphy without Rudy Ray Moore.

Scott Alexander and Larry Karaszewski have cornered the market on these biopics of disparate characters who through force of will managed to change the world, even if seemingly by accident. Ed Wood and The People vs. Larry Flynt  are both classics, and Dolemite Is My Name is just as good. We’ve all seen Eddie disappear into a character before, but this time it feels personal in a way that many of his other performances do not, brilliant as they are. Director Craig Brewer knows this territory well – his Hustle & Flow is also about the voiceless finding not only their voice, but a microphone to shout from, and as we see Rudy Ray Moore come alive on the stage, it’s as if we’re watching someone surface from still waters, taking deep breaths, after being under for way too long. 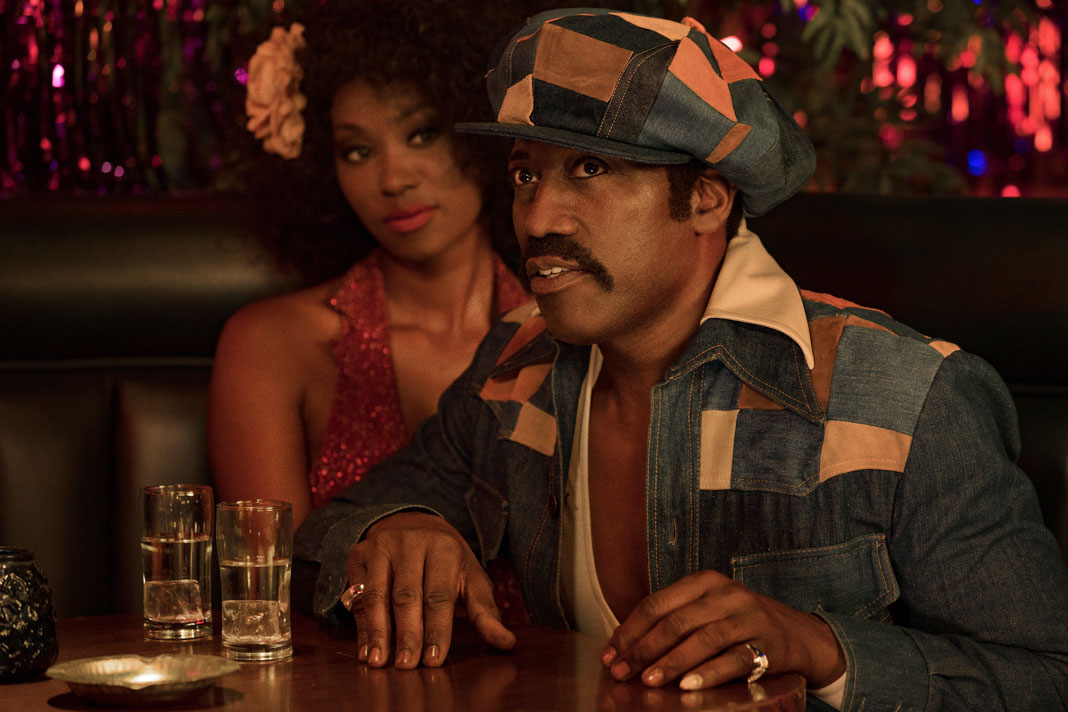 Rudy has a way of inspiring everyone around him, including his crew, and especially Lady Reed, who is just about tired of everyone’s crap until she discovers that she too, has value, and Da’Vine Joy Rudolph is revelatory in the role. This is one of the best Wesley Snipes performances in years, and while we’ve seen Snipes do comedy before, this is also a rich opportunity to see him shine inside such a wonderful character. Not unlike his character, Eddie Murphy also inspires all the performances around him. You can sense the electricity in each scene, as so many of Murphy’s fellow actors and actresses pop off the screen. It’s not all comedic riffs, either – my favorite scene of the film is when Rudy angrily tells his director just how much he and his friends have a stake in this, and his smile turns into an intensity and a fierce need to have his voice heard by those who do not take him seriously.

We all know the destination of this journey, but the fun is how we get there. This is as American a success story as any of them, and Rudy Ray Moore’s tenacity is infectious. Nothing is handed to him, but that doesn’t keep him from getting what he wants. There is a beautiful moment when, during shooting, Murphy turns to the camera and gives us a joyous smile, and I wanted to cheer. This is a movie that should be seen with a crowd; yes, it will be on Netflix after a brief theatrical run, but do not wait for that. Even seeing it at a press screening, with supposedly staid, reserved critics analyzing every frame, there is a joy that cannot be denied, and it brought us all to applause. For us fans, this is a day long awaited. Eddie Murphy deserves sincere awards consideration for his work here. Dolemite Is My Name is uproariously funny, inspiring, and full of that dreamstuff that we see movies for.

Eddie’s back. And the world is so much better for it.

Netflix has released the trailer and poster for The Sleepover, the family adventure-comedy coming to the streaming service on August 21, 2020.
Read more
Movies

Netflix has released the Ratched trailer, which gives you a first look at the eight-episode series that explores the origin of one...
Read more
Streaming

Netflix Reveals a First Look at The Devil All the Time

Netflix has revealed a first look at The Devil All the Time, the midwestern gothic tale launching globally on the streaming service...
Read more
Streaming

Netflix Renews Money Heist for a Fifth and Final Season

Netflix has announced that Money Heist, aka La casa de papel, has been renewed for a fifth and final season. The new...
Read more
Streaming

Netflix has released new Lucifer Season 5 photos, which you can view below. The entire fifth season will consist of 16 episodes,...
Read more

One of the most successful live-action video game film franchises of all time gets an upgrade when the Resident Evil 4K Ultra...
Read more