More
Home Movies The Lion King Review: Should You Check Out This Disney Remake?

The Lion King Review: Should You Check Out This Disney Remake?

Before I start this The Lion King review, I want to address something so you know where I stand. There has been some discussion online lately about whether or not people are fans of Disney live-action remakes. Though I’ve enjoyed reading both sides, I have loved some and not others. I’m also okay with changes, because the originals still exist, and I can watch them any time I want. Now, The Lion King isn’t a “live-action” remake, but it falls into that category because it’s not animated in the same way. I’d been to the “set” of the film a while back, so I knew about all the technology that went into the new film, but I wasn’t prepared for the powerful emotional punch that seeing “real lions” was going to have on me. You’d think I would be. The animated film from back in 1994 still makes me cry every single time I watch.

So, how is Jon Favreau’s reimagining of the animated classic? I’m going to start with the visuals because that’s the biggest difference and what people are going to be talking about immediately. Now I will say that when I tweeted about how beautiful the visuals were, some people seemed put out. They’re tired of hearing about how pretty something is because the story is ultimately more important. I’m sorry, but people are going to talk about the visuals first when the visuals look like this. They’re going to do it because it makes The Jungle Book look almost primitive in comparison, and what they’ve done, particularly with the eyes of the animals, is mind-blowing. I used the word “breathtaking” in my tweet, and I stand by that. There are moments where I felt like I was watching a nature special. There were other moments when I was mesmerized by the way the lion’s feet move. There are a lot of head butts in the film between the lions, and anyone who has cats is going to want to head butt their little tiny lions as soon as they get home. Watching the expression in Rafiki’s (John Kani) eyes, or the movement of Pumbaa’s (Seth Rogen) face is almost magical. I was actually surprised how quickly I forgot that lions’ mouths aren’t supposed to move in a way that allows them to speak.

To continue the visual discussion, I can tell you without revealing some of the jokes, that the physical comedy from Timon (Billy Eichner) and Pumbaa is spot on. The realistic style is also going to make something we all know is going to happen (spoilers for the animated film ahead) rather hard to take. Mufasa’s (James Earl Jones) death, though not shown in the exact same way as in the animated film, is painful to watch. I did have to look away. It’s not graphic, but seeing him lying there reminded me of pets at the end of their lives. It’s powerful, but it’s also powerfully difficult to look at. It’s easier to think of these characters as real. If you have to turn off nature shows when animals die, you’re probably going to have to look away as well. I highly recommend that you bring tissues to this film, as you’re going to be leaking from your eyes from the opening strains of the music.

In fact, death is something we need to address a little bit further. It’s difficult to watch when Nala (Beyoncé Knowles) tries to eat a character that we’ve heard speak. (She doesn’t, so fear not.) In fact, what we’re mostly seeing is animals eating bugs here. There were kids of around seven- to nine-years-old sitting in the row with me, and there was some crying, but more laughter and squeals of delight. 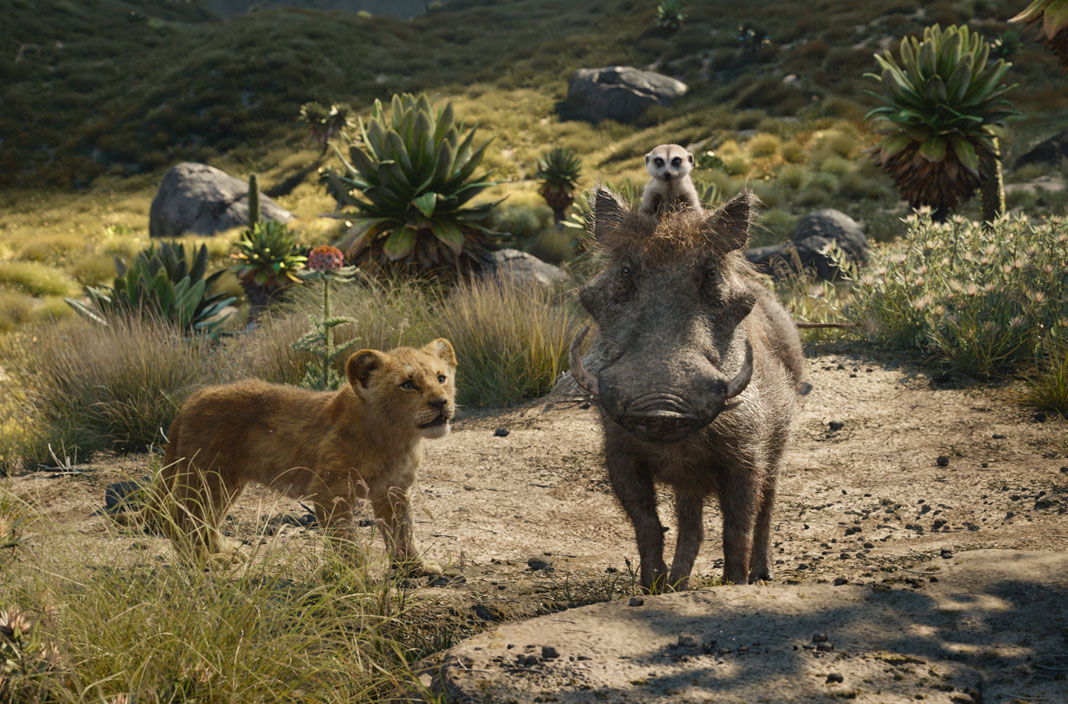 Speaking of laughter, there is a lot in here. There is something about seeing live animals doing physical comedy that is even funnier than what you see in a traditionally animated film. Maybe it’s years of watching cat videos online that is responsible for my reaction, but this film is funny! Timon and Pumbaa are so well-matched that even when you hear Seth Rogen’s very distinctive laugh come out, it fits, and Timon’s reactions to Pumbaa’s goofiness are priceless. So was the audience’s at the screening. I didn’t think it was possible to improve on the animated film in that sense, but this does. The jokes are updated, and there is one particular ensemble sequence with the two characters and their friends that will leave the audience in stitches. I won’t reveal what it is, but you’ll know it when you see it. There is one sequence in there that is a little off involving an “I can’t even” joke, but the rest is flawless.

Everyone’s voice work here is powerful, from JD McCrary’s young Simba and his little kid bravado to Donald Glover’s adult Simba with his change from selfish “teen” to the King. Chiwetel Ejiofor’s Scar is wonderful, and “Be Prepared” is absolutely chilling. In fact, all the vocal performances, including John Oliver as Zazu (who is perfectly cast) speak-singing his lines, are worthy successors to the original.

Nala’s role is definitely expanded here, which makes sense when you have Beyoncé to do the voice. Nala is wonderful, both as the younger version of herself and the adult version, and having the song “Can You Feel the Love Tonight” sung by the two adult lions in a “voiceover” style while they frolick was perfect.

So, what are the issues? Well, as I said, there are certain things that are difficult to watch, particularly if you’re an animal lover. Mufasa’s death is far more difficult to watch in this version, and the lion battles are going to give you anxiety. Even Scar’s fate is painful because you’re seeing a “real” animal in pain. You even start to feel for the bugs. As someone who won’t kill a spider, but instead scoops them up in a cup and “re-homes” them outside, it’s a lot to take. The final battle made me want to go home and wrap my cats in bubble wrap so nothing can hurt them. It may be a bit scarier for children, because it looks so real. That said, more emotional response isn’t a bad thing in storytelling if you’re old enough to handle it.

Overall, The Lion King is a powerful remake, and one that will have you gasping and wondering how they did that. I would even venture to say it’s the best Disney remake so far.

Disney’s The Lion King, directed by Jon Favreau, journeys to the African savanna where a future king is born. Simba idolizes his father, King Mufasa, and takes to heart his own royal destiny. But not everyone in the kingdom celebrates the new cub’s arrival. Scar, Mufasa’s brother—and former heir to the throne—has plans of his own. The battle for Pride Rock is ravaged with betrayal, tragedy and drama, ultimately resulting in Simba’s exile. With help from a curious pair of newfound friends, Simba will have to figure out how to grow up and take back what is rightfully his. The all-star cast includes Donald Glover as Simba, Beyoncé Knowles-Carter as Nala, James Earl Jones as Mufasa, Chiwetel Ejiofor as Scar, Seth Rogen as Pumbaa and Billy Eichner as Timon. Disney’s The Lion King roars into theaters on July 19, 2019.

Parkwood Entertainment, in association with Disney+, has announced and debuted the teaser video for the visual album Black Is King, written, directed...
Read more
Games

The Mandalorian Season Two to Premiere in Fall 2020

Jon Favreau today confirmed on his social channels that The Mandalorian Season Two will premiere on Disney+ in the fall of 2020! You can view...
Read more
Movies

After Rise of Skywalker, Star Wars Films Won’t Stick to a ‘Three-Act Structure’

Star Wars: The Rise of Skywalker may be the last Star Wars film to have a three-act structure for a while, according to LA Times. Lucasfilm...
Read more

Mattel and Universal Pictures are teaming up to develop the live-action motion picture Wishbone, based on the hit television series from the...
Read more

A Pill Gives You Superpowers in the Project Power Trailer

What would you risk for five minutes of pure power? Netflix has provided us with the trailer, key art and photos for...
Read more

Netflix has revealed the official trailer for the third and final season of The Rain. The can watch the trailer and view...
Read more

Tyra Banks to Host and Executive Produce Dancing with the Stars