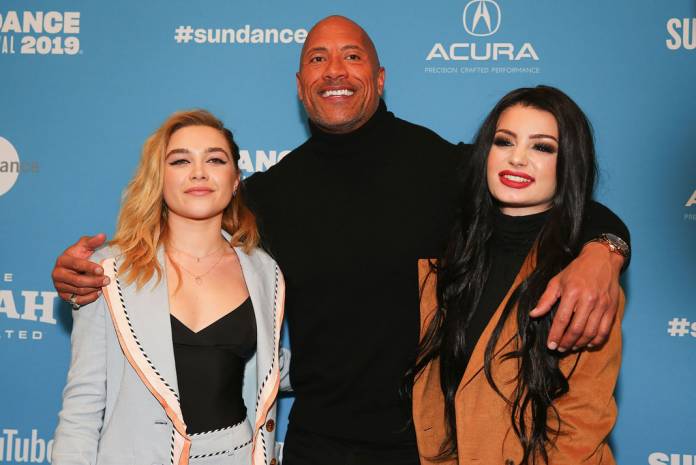 Between 2012 and 2016, WWE Superstar Paige was at the top of the WWE Women’s Division, first as NXT Champ, then Divas Champion before being sidelined by an injury that put her more into an administrative position with the WWE. Few of Paige’s millions of fans, including many little girls, know about her history before coming to the WWE, something that the new movie Fighting with My Family hopes to correct.

Paige was born Saraya-Jade Bevis into a wrestling family which captured the interest of Channel 4 for a documentary that in turn led to Stephen Merchant of The Office fame signing on to write and direct Fighting with My Family. Produced by former WWE superstar Dwayne “The Rock” Johnson, who also makes a couple appearances as himself, the film follows Paige (played by Florence Pugh) and her brother Zak (Jack Lowden) as they tryout for the WWE. Only Paige is accepted into the NXT training center where she’s put through her paces by the coach (Vince Vaughn) and constantly feels like an outcast among the models and cheerleaders that usually sign up to wrestle.

It’s hard to believe, but Fighting with my Family might be the very first biopic about a professional wrestler, which isn’t bad for a woman who has been wrestling for half her life yet is still under the age of 30. VitalThrills.com had a chance to speak with Paige on the phone from her New York press day this past weekend, and we learned a few new things, including her desire to continue acting. (She previously appeared in WWE Films’ Santa’s Little Helper and provided her voice for a few animated WWE movies.) 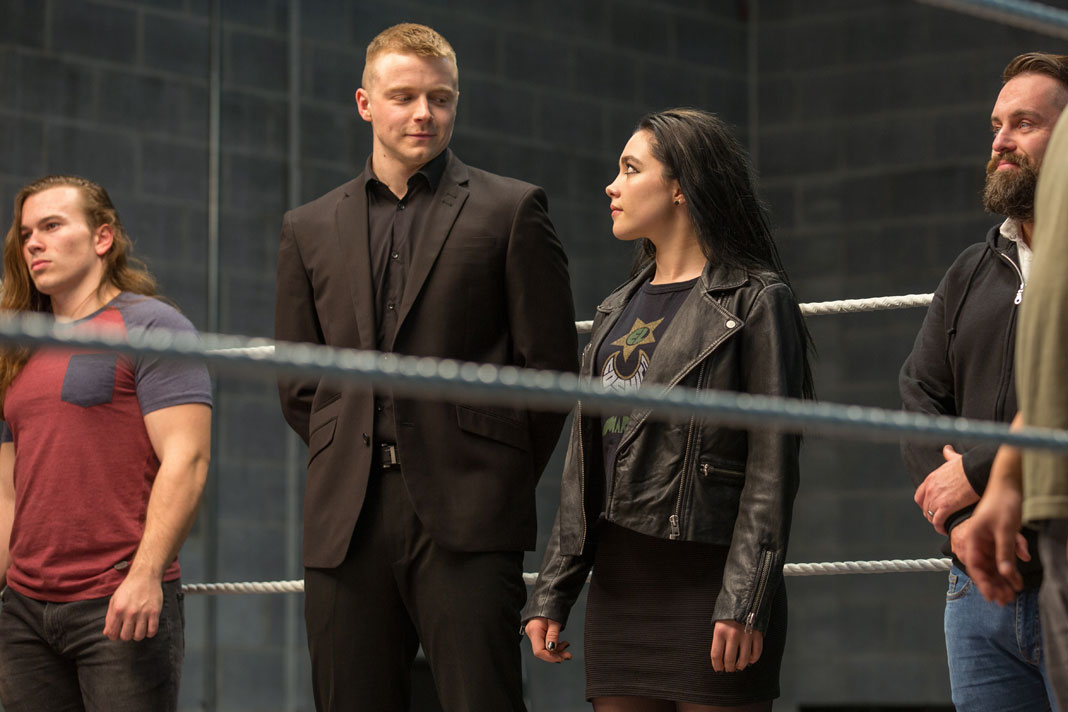 Vital Thrills: I haven’t seen the Channel 4 documentary, but how long was your family in the wrestling business before you were born and at what age did you get involved?

VT: Had you and your brother Zak tried out for WWE and NXT back when Channel 4 was making the documentary still or was that afterwards?


Paige: Yeah, that was the whole thing. If you watch the documentary, that’s the whole story of it leading up to the tryout of WWE.

VT: It’s pretty amazing the way it recreates that whole experience. What were your feelings when you found out that they wanted to make a movie out of that story with Stephen Merchant? Did you want to be involved with it or did you just say “Good luck, have fun”?


Paige: No, of course, I wanted to be involved with it — it was my story — but it was Dwayne [Johnson] who obviously approached me, and he was in England at that time for “Fast and the Furious,” and he stumbled across the documentary. He just fell in love with it – my family, my story, and stuff like that, and then he was the one who told me and asked me if he could take my story and make it into a movie. And then he said that Stephen Merchant was going to be the writer and director of it, and so Stephen was very hands-on. He talked to me all the time, he came and visited when I was at work and stuff like that, and he was just so invested in the story, and I felt like he did a fantastic job. Have you seen the movie?

VT: Yes, I absolutely loved it. 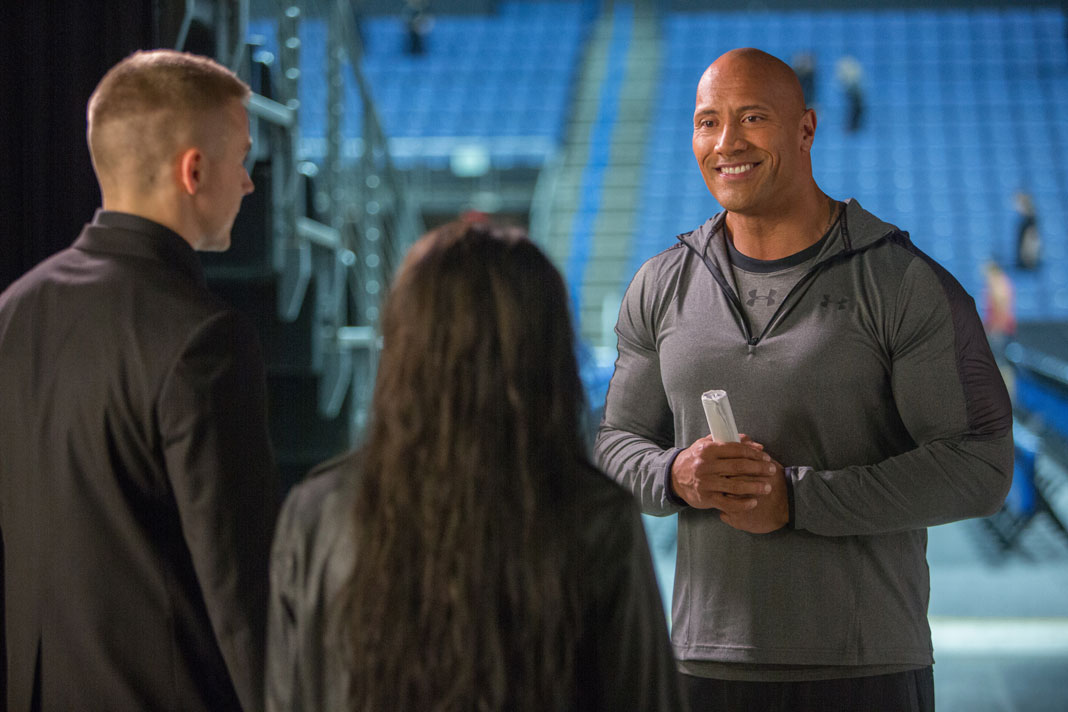 VT: It was a very different movie from what I expected from seeing the commercials. I was tearing up in a couple places, which I wasn’t expecting.


Paige: Yeah, I’m just happy that it got the ratings that it did. It was so incredible, and it’s so mind-blowing that so many people loved it. It got 90% on Rotten Tomatoes*, so it can’t be bad. It’s a really beautiful movie, and I’m so thankful that I had such a great cast to portray my family. (*Just a note that Paige pronounces “Tomatoes” as “Toe-mah-toes” which is kind of adorable.)

Paige: I didn’t actually get to meet her until after the movie, because I just had surgery so I couldn’t fly over to England while they were filming it, because the doctor said I couldn’t, but I actually called and texted her, just like Stephen, every other day, and we just had this beautiful bond. Any time she needed help with anything, I was there for her.

VT: I was really amazed, because I’d seen her in “Lady Macbeth” but that was such a different role. Obviously, there’s a lot of footage of you out there doing interviews and wrestling for her to work from…

Paige: Yeah, well, she actually went to the performance center [in Orlando, Florida] and trained as well, so she was fully committed to this role, and she’s such a great actress anyway. She just did such a wonderful job.

VT: I’m not sure I knew that Dwayne was involved so early on. I knew that Channel 4 had made the doc, but I didn’t know how it came together or how WWE Films got involved.

Paige: Oh, yeah. They were at the forefront of the movie, WWE. Dwayne obviously is very proud of this movie, and he’s the reason why it’s here in the first place, and then MGM… everyone’s involved. 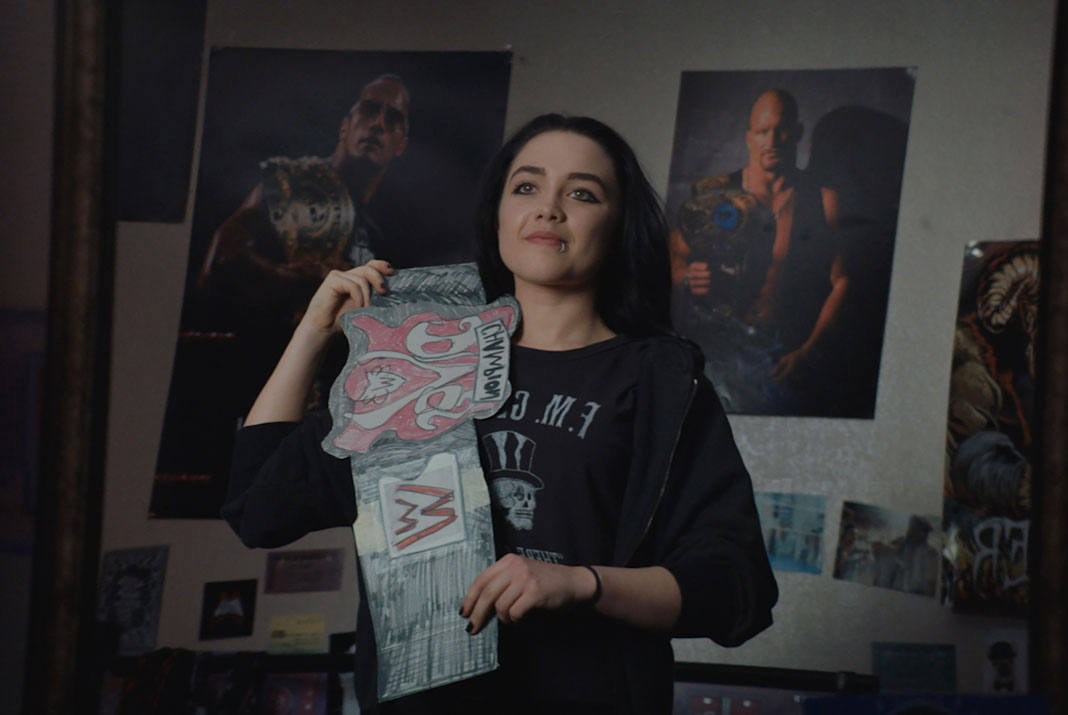 VT: I also liked how Stephen recreated your first appearance on “WWE Raw,” because I hadn’t watched wrestling in about 14 years and that episode was the first one I watched in 14 years.

VT: Yes, it was a complete coincidence, but I had no idea who “Paige” was when you won the Divas Championship. I think I had seen a “Total Divas” marathon and decided to check it out.

Paige: Oh, that’s so funny. That’s so great! So you got to see the real match.

VT: Yes, and I was really impressed. You know how everyone’s talking about the Live Aid scene in “Bohemian Rhapsody,” and I thought what Stephen Merchant did to recreate that match was equally impressive. Do you know what was involved? Did Stephen just come to a Raw taping to film that?

Paige: When they recreated it, yeah, they went to the Staples Center, and they had an hour after “Raw” to film it. Dwayne obviously went out and hyped the crowd and stuff like that beforehand and warned them what was about to happen, and that when my music hit, it wasn’t going to be me, it was going to be Florence, and it’s all part of the movie. Wrestling fans can either receive it well or they don’t receive it well, so some of the crowd were just not happy about it, but some were. They all stayed anyway, and they did really wonderful, and they managed to get the shot. That was the third day of filming, too, so Florence was so nervous. I remember her calling me that day being like, “Well, how did you do it? There’s like 8,000 people here,” and I was like, “You just have to pretend they’re not there. That’s the only advice I can give you.”

VT: And you weren’t able to be there for that filming either?

Paige: No, so that was third day of filming, so I was just about to head into surgery. 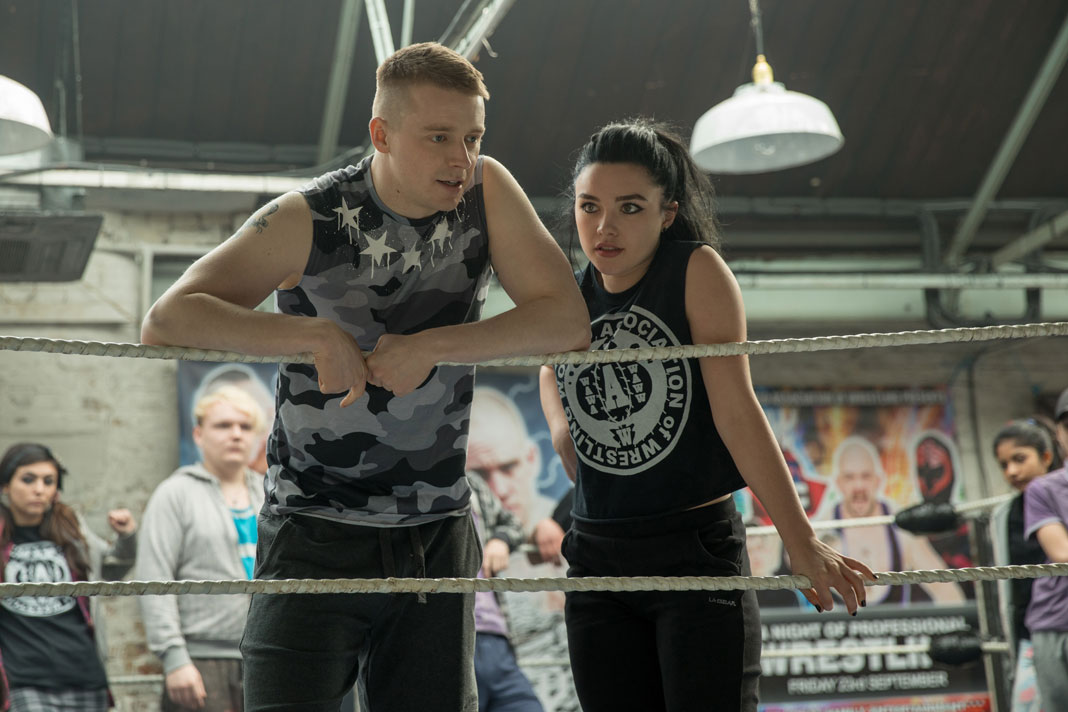 VT: Gotcha. What did your family think of the movie, especially Zak? It seems to be just as much his story, and he’s not as well known to WWE fans or anyone. What did he think of how he was portrayed in the movie?

Paige: Well, that’s so funny, because Zack just walked in here while I’m doing this interview. (laughs) He walked in just as you asked that question. He obviously loved the movie. He’s here so he can probably tell you what he thought of it, but I always say that the beautiful thing about Zack’s story in this movie is that…. There’s a couple stories in the movie. Obviously, being the underdog is my story and the family’s story, but Zack has such a beautiful story, because you shouldn’t be told you’re successful based on if you’re in front of the camera or if you’re in front of thousands of people or if you’re famous or if you’re an actor or whatever, that shouldn’t be your level of success. What Zack is successful about is that he taught a bunch of disabled kids how to wrestle, something that they should have been incapable of doing yet he managed to do that. And then he had a family and he now owns part of the company, and he’s going into acting. He’s successful at what he does, and it shouldn’t be measured by the fame. That’s what I love about what’s being portrayed in the movie, is that people nowadays, they’re so concerned about being famous and having a bunch of Instagram followers, and they forget that you can just be successful if you want to be a teacher, if you have different dreams and you accomplish them, that’s successful. I love that story that they had.

VT: I don’t know if you’re the type of wrestler who watches your matches, but was it surreal to watch the finished movie? What were your feelings when you saw it for the first time? Was it hard to watch?

Paige: Oh, no. The first time I cried my eyes out. I couldn’t watch. I was sitting there by myself, because Stephen couldn’t watch it with me, because he thought that if he watched it, he would constantly be staring at me to see if I liked it.  But he loved it, and then my whole family loved it, and then the second time I watched it – I actually watched it with my boyfriend, too, and he’s not a crier whatsoever, and he was crying, I was crying. The movie’s just so beautiful. It’s just such a warm movie about family and being the underdog and being successful in your life. It’s just so wonderful to see, and sometimes, I forget that it’s our movie, too, because the actors did so well — the cast did such a wonderful job — that you sit back and you’re like, “Wow, I hope they made it. Did Zak make it? What’s Zak doing now?” And I’m like, “Oh, wait, that’s my brother I’m talking about. Oh, wait, this is my story. What the hell am I talking about?” It’s just a great story. 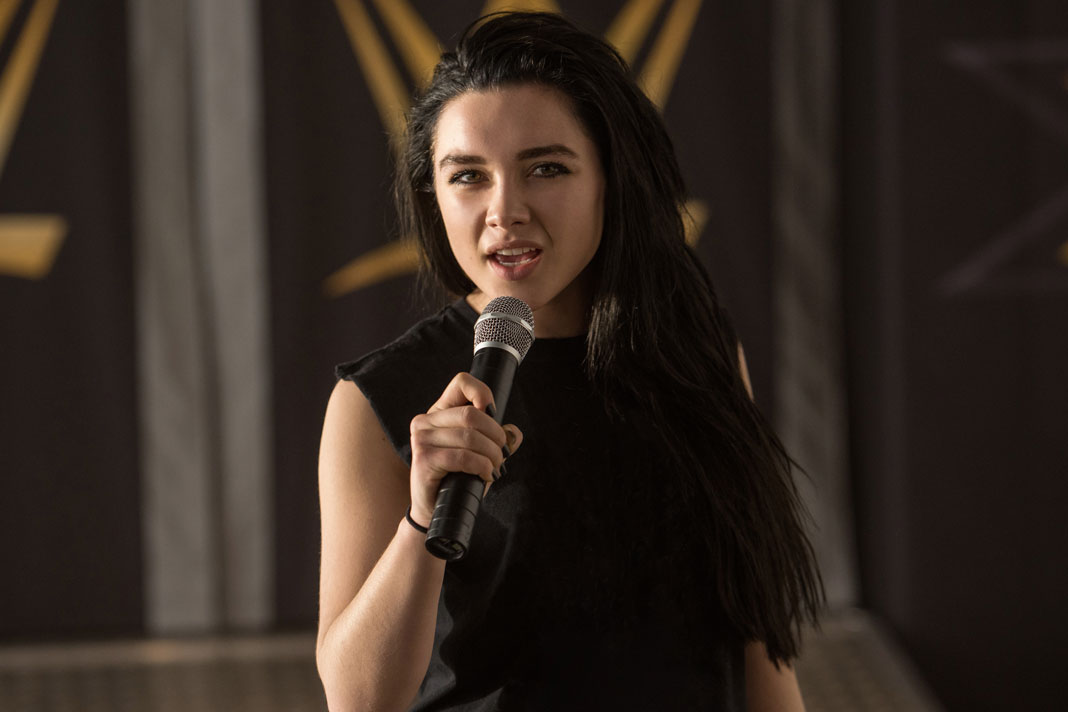 VT: I’m really curious to see how non-WWE fans think of it, because I think it works well if you don’t know anything about it.

Paige: Exactly. This whole movie, when you’re not necessarily a wrestling fan, is kind of the same as “Rocky,” where if you watch “Rocky” and happen to be a boxing fan, you’re just loving the underdog story and him overcoming all these obstacles and sticking to his guns and how in the end he’s victorious. It’s one of those heartfelt, beautiful dream-chasing stories.

VT: Are we going to see you on “Total Divas” again or doing more movies?


Paige: Um… not sure when it comes to “Total Divas” next but hopefully, I can go into something, maybe movies and stuff like that. That’s my interests.


Paige: Awww… thanks so much. Thank you.

MGM‘s Fighting with My Family opens in New York and L.A. on Thursday, February 14, and then expands nationwide on Friday, February 22.