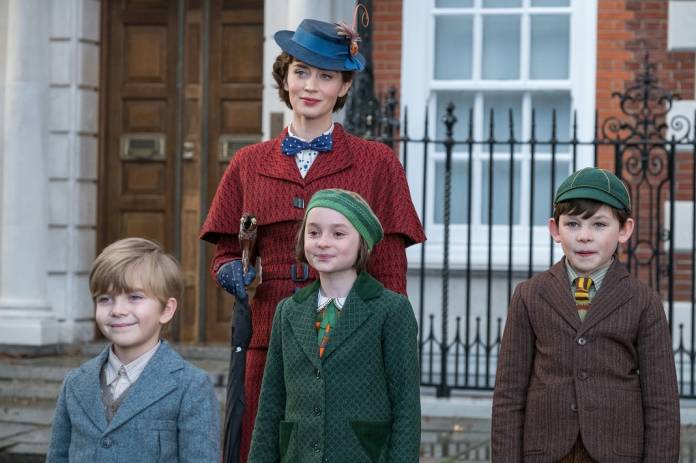 It has been 54 years since the delightfully-witty nanny Mary Poppins has graced theaters everywhere, with Julie Andrews giving a legendary performance that delighted fans both young and old alike. Since the release of the first film, Mary Poppins has achieved an iconic, almost untouchable status in Hollywood. Now, after decades of waiting, we are finally getting a sequel in Disney‘s Mary Poppins Returns. The film hits theaters on December 19, 2018, and fans everywhere will be able to experience the nostalgia as they return back to Cherry Tree Lane with mixed results.

The film takes place during the Great Depression era and focuses on the Banks’ children, who are all grown up and are not doing so well in life. Michael Banks, played by an emotionally-weary Ben Winshaw, is doing his best to keep the home and family together after his wife’s passing. His children have struggled along with him and, for the most part, have forced themselves to grow up while Michael struggles to make ends meet. Jane Banks, played by a horribly-underutilized Emily Mortimer, has given up on love and is fighting for workers’ rights. Emotions quickly hit their peak early on in the film as Michael discovers that he is losing his home. With the Banks’ children of all ages thrown into great emotional peril, it was little wonder that an ominous wind would whisk in Mary Poppins when everyone needed her the most. I would mention more, but I don’t want to ruin too many surprises.

The cinematography and visuals in this film are absolutely breathtaking. Whether we are inside the ridiculously fantasy-bending worlds that Mary Poppins drags her charges into or running around outside in the streets of London, much of the film was beautifully shot. I did have a minor gripe about how the bathtub scene’s CGI was handled, because there are moments where it definitely doesn’t feel like anyone is underwater. However, the amount of work that went into creating that scene as well as the stupendous animation sequence cannot be ignored and I must tip my hat to all who were involved in creating the final product of those sequences.

As for the acting, I would say that there is a mixed variety of performances. The gleaming light in this film is Emily Blunt, who I felt came to embody the character in a way that still stays true to what we knew from the original film and the novels while also making it her own. As much as I love Lin-Manuel Miranda’s musical work, his performance reminded me very much of Dick Van Dyke‘s Bert but delivered with an emphasis more meant for a musical theatre stage rather than camera work, i.e. very big and expressive and not necessarily very natural. Emily Mortimer and Colin Firth do the best with what they were given in the script. I wish I could have seen more for them outside of what I felt were throwaway trope characters. Ben Winshaw’s performance is kind of hit and miss for me. At times, I felt that the emotion he conveys in certain scenes felt very natural while other times I was a bit confused by the direction he was going in his delivery. Dick Van Dyke was a jewel and is precious and I’m so glad that he was able to partake in this sequel.

The musical performances delivered in the film mostly consisted of highs for me. The lyrics were very well crafted and definitely deliver tones that pay homage to the original music featured in Mary Poppins. Emily Blunt consistently delivers vocally, delivering emotion that helps transcend the songs into places that will touch hearts (but may not make people cry). For fans of Lin-Manuel Miranda, there is a brief portion in a song that features him rapping. However, this may also be an issue for people who want him to get away from his career-making Hamilton. Various homages to the original score are featured throughout the course of the film and increase in regularity as the film reaches its conclusion, giving many fans of the original film much to munch on.

I was able to see this film in an early screening with my mother and it was intriguing to see how we both interpreted Mary Poppins Returns from our own different generational perspectives. Although we had both seen the original film as children, the original was so firmly imprinted in her mind that it heavily influenced how she interpreted the sequel. The original was like gospel and Julie Andrews was God and nothing could compare. As for myself, even though I rewatched the original a week prior to viewing the sequel, I didn’t have that same attachment to the original. Much like the original film, I thought that Mary Poppins Returns was a film that has its upsides as well as its downsides.

However, seeing my mother’s reaction after the film finished verified to me that one of the issues that may either make or break this film is that iconic impression that the original has left on generations since its release. There are moments written in the film about Mary’s character that will have many familiar with Julie Andrews’s version questioning whether or not Emily Blunt’s version is actually doing the character justice. If people do have these concerns, I would have to place the blame on the writing rather than the acting.

Overall, Mary Poppins Returns is definitely a film that seeks to introduce the titular character to a brand new generation of children. And, for many familiar with the original film who don’t have time to rewatch the original, the storyline’s similarity to the original will work to help maintain that childlike wonder that the first film delivered. I recommend taking the entire family, both young and old, to the film because there are many themes that the family unit can take away from Mary Poppins Returns. And bringing the family together to learn from Mary is what I think the film is about in the end.