This past week, VitalThrills.com got a chance to check out the premiere and press conference for the upcoming Netflix film, Murder Mystery. On the panel were writer James Vanderbilt, director Kyle Newacheck, Luis Gerardo Mendez Shioli Kutsuna, Adam Sandler, Jennifer Aniston and Dany Boon.

In the film, when a NYC cop (Adam Sandler) finally takes his wife (Jennifer Aniston) on a long promised European trip, a chance meeting on the flight with a mysterious man (Luke Evans) gets them invited to an intimate family gathering on the Super Yacht of elderly billionaire Malcolm Quince. When Quince is murdered, they become the prime suspects in a modern day whodunit.

Vanderbilt spoke about the inspiration for the film. He told the crowd, “I was a child of the 80s. So I grew up with movies like ‘Murder by Death’ and ‘Clue’ and just sort of these great, funny comedies. And when I first wrote the script, I had recently gotten married. And I realized there were movies about couples who were falling in love or movies about couples that were just about to break up. But there was never sort of a movie about a couple who was married and were in love and worked together to do something. So I sort of loved the idea of what if an American married couple like that crashed into an Agatha Christie story.”

Kutsuna talked about being funny with two comedy legends. “I mean, it was such a great experience. I have actually never done comedy back in Japan. I avoided comedy because I was terrified to. I felt so much pressure to have to be funny. But yeah. It was just really amazing.” Sandler joked that Aniston yelled at Kutsuna to make her funny. Aniston laughed back, saying, “You threw a dart at her. That will get your butt in gear. No, she was lovely. She’s fantastic.”

Murder Mystery reunites Aniston and Sandler years after their last film, Just Go With It. Aniston talked about working together again. She said, “Actually, it was just like no time had actually passed. Because we’ve seen each other over the years. And it’s something that just comes sort of extremely naturally to us. I think just because we’ve known each other for so long. And it’s kind of what we do. So it just felt very natural. But he is a lot older now.” Sandler added, “I did age. I did age. I saw ‘Just Go With It’ the other night. I was going to sleep and I said let me watch one of my movies tonight.” Aniston asked if it was to put himself to sleep. He responded, “Yeah. Peaceful. No. I sometimes will watch my movies and just put the entire family on speaker phone and go, do you see how much I have accomplished? Now do you like me? But I watched ‘Just Go With It’ and I was laughing. Really. Yes. It was really funny.” He joked that Aniston looked amazing then and now, but that he had become “softer.”

Boon spoke about doing a movie in English instead of his native French. “I was so happy. The thing is, of course I was a little bit nervous to play in English. Because I used to speak French before. But the thing is, both of them, I’m a huge fan of their work. And the chemistry of both of you are just great. And it’s great to see you getting the lines and make fun of the things and invent all around. And to be also generous with the other actors actually. That’s the point. Not to keep the funny part and to share it. And I think it’s what we feel when we see the movie. The agents laughed out loud yesterday because it’s a lot of generosity in that movie and humanity.”

Newacheck joked about doing a “grown-up” film this time around. He told the crowd, “This was actually new for me. Because I have been hard comedy, hard comedy, basically males between 14 and 25, like everything that I did before this. So to have the opportunity to broaden a little bit and actually a lot a bit and make this for an eight year old for everyone, it felt really good. Like my first movie that I made. It was so out there and pushed the boundaries that my uncle turned it off halfway through.” He joked, “My mom told me that later. And I was like Uncle Stu watched my movie? Like what’s up. And so this movie the whole time in my mind, I was like I’m making a movie that Uncle Stu is not going to turn off.”

While Sandler joked that Aniston worked harder than he did on the film, she denied that. She also said that having a comedy grounded in reality was important. She said, “For me, it’s really important that it’s grounded. Comedy, there’s great like balls out comedy and then there’s comedy when it’s this broad to find some level of truth in it in order to find the organic laugh as opposed to the ba dump bump laugh. So I think that just, that kind of work as we went along really was fun and it made it better as we went.”

Mendez said his favorite memory from the film was doing Formula 1 racing. This was the first film to do this on the actual Monaco Grand Prix track. He said, “I remember with a special memory, shooting in Monaco in the Grand Prix. I was dressed like this McLaren driver with Kyle with the camera behind me. And people, they thought I was an actual McLaren driver. So everyone was like asking me for pictures or autographs. And I was looking at the title. He was like yeah, yeah, go with it. So I was like signing autographs and sh*t. And these people are like huge fans from actual F1 racecar drivers. Or when they were looking closely to me, they were like, he’s a fake one, you know? But yeah. That was fun. And then when I got into the car. Because everyone was asking me, hey, did you have fun being in the McLaren car? And I was like no. I f****** hate it. Because I had a panic attack in there. Because you’re so tight with all these things and bells and the helmet. You cannot breathe. I remember Kyle was watching me and he was like, and I was like take me out. It was horrible.”

Sandler talked about how much fun he has working with Aniston. “I think she’s incredibly funny. Everything Jennifer, when we work together, I feel so relaxed. I’m like if I don’t what’s happening right now, I know Jennifer will. I feel very safe. And she’s funny as hell. And I really have a great time every scene. We do come up with stuff.” Aniston responded, “It’s like a weird language that we sort of speak. I have no idea what it is. But it’s the most abstract, weird jokes. It never goes over his head…as long as I can make Adam laugh, I know that I’ve done good.”

Murder Mystery will premiere on the streaming service on Friday, June 14. Are you excited to check it out? Let us know in the comments. 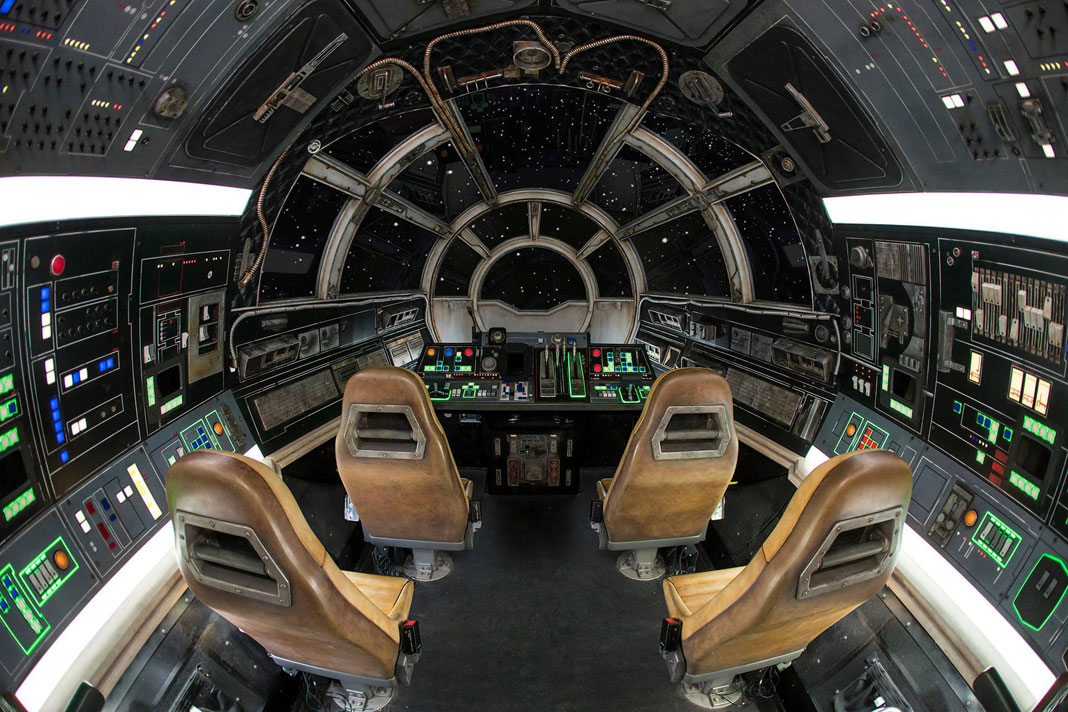 Previous
Star Wars: Galaxy's Edge Tips - What to Do First 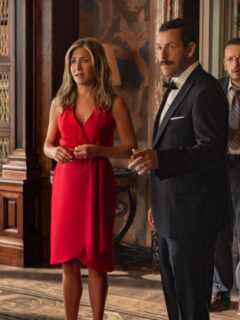 Next
We Review Jennifer Aniston, Adam Sandler's Murder Mystery
Click here to cancel reply.
Disclaimer: This post may contain affiliate links through which we earn a commission if you decide to make a purchase, at no cost to you. As an Amazon Associate, we earn from qualifying purchases.
Amazon Prime Day 2021 is June 21 and 22! Click here for the deals.